It was cloudy yesterday morning at Pennyfield lock as we set out north towards Riley’s lock.  My old routine of early morning runs along the river on Sunday mornings has changed. I have company these days.  It has become a family affair. My wife and I are by ourselves on some of the Sundays, but on many other Sundays this also turns into a group event with other families joining us, the other families having been convinced that the outdoor activity is indeed a good thing for them.  In order to accommodate the larger group, this event has become a walk rather than a run, and it takes place a little later in the morning than I have gotten used to for many years.  But it is all for a good cause! 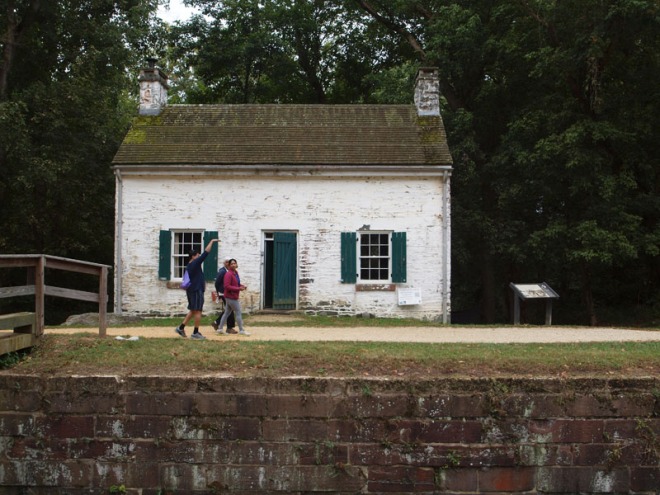 The cool of the cloudy morning, the early signs of changing color on the trees, and the dry leaves already on the ground informed us that the Fall season is on its way.

There are still flowers on some of the plants along the trail, but I could see that these would also be soon gone.

There were no herons to be seen on the canal this day, but I did sight an egret in the distance in the middle of the river.  What was it up to? Was it catching fish, or simply enjoying the feeling of standing in the flowing water while listening to the sounds of the river around it.

The waters of the river were low and at some point we decided to go down to the river from the towpath to see how far we could get walking towards the middle of the river by stepping over the exposed rocks.

We encountered plenty of damselflies along the way. (Yes, these exist, and they are not the same as dragonflies.)  Some of us tried to catch them as they hovered around, but they were too quick for us.  I stuck to using my camera. 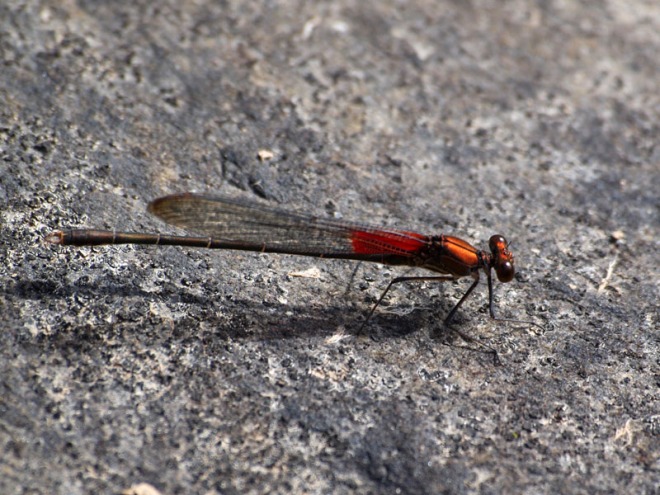 The water was clear and you could see the fish and other little creatures of the water swimming around.  There were dry leaves already floating in the water, a sure a sign of the start of the Fall season, .

As we walked along the towpath we came upon the squirrel sitting on the branch of a tree chewing on something or the other.  It cooperated long enough for its picture to be taken.

It was a very pleasant walk on a day that also happened to be my birthday. I think this was the appropriate way to celebrate an event like this, and the way to also try to celebrate every day of my life.