When I was a young lad growing up in Madras I used to enjoy the trips to Kerala for our summer vacations.  It did not take me too long to get bored during my stay in my grandmother’s place once I was there, but the travels on the train were one of the highlights of the summer experience.  The romance of these journeys by train never dimmed.  Arriving at the train station and wading through the crowds, to try to find one’s reserved compartment at the beginning of the journey; trying to sleep on the berths next to the noisy ceiling fans during the night as the train rocked rhythmically and sped on to its destination; trying to wake up at various points in the night so that I could see all the stations that the train stopped at, and perhaps even buy a cup of tea from a lonely chaiwalla on an empty platform; experiencing a sense of the power of the diesel locomotive while listening to its distant horn in the night – these are just some of the many, many, memories that come back to me as I write this.  The train would lurch back as the engine connected to the carriages of the Trivandrum Express at Madras Central Station, the horn would blow just as the train started inching forward into the evening, and from then onwards it was a nonstop adventure until the time we reached our destination.  Perhaps I was the only one sitting in the moving train during the daytime with my head against the iron bars of the open window peering towards the front trying to catch a sight of the engine every time it rounded a curve. Was I the only one trying to count the number of carriages on the train?  I might have been the only kid with the railway timetable for the Southern Railways in hand trying to figure out where the train was supposed to be at that particular time, watching the hundred meter markers by the side of the tracks and trying to figure out the speed of the train, trying to anticipate when exactly one would arrive at the next station.  I most likely was not the only one with my head stuck to the window staring at the passing green fields and coconut groves of the Kerala landscape, watching the local folk go about their the daily activities – magical people living their lives in a faraway enchanted land.

The first train stop in Kerala, after it crossed the Western Ghats, happened to be at a place that used to be called Olavakkot Junction.  (The name of this station has since been changed to Palakkad Junction.) If we were lucky we would break journey at Olavakkot Junction and we would make our way over the back roads to my aunt’s place the little village of Dhoni.  At that time there was nothing more than a few houses and surrounding farms in Dhoni.  But Dhoni was a great place to visit for a vacation. My aunt’s little house with its open front veranda looked out onto wide open spaces and the hills of the Western Ghats.  Up in the distance on the hills to the east you could see the trees and the forest, and if you looked up carefully you could even see the dirt road that led up into the woods.  Towards the front of the house was a bald hill where I probably experienced hiking and rock climbing for the first time.  From the top of the hill, one could survey the surroundings.  Getting to the top was a big achievement for me and I would feel a sense of elation.  In hindsight, I do not think that the hill was really as imposing as it appeared to me a child, but nothing got in the way of my imagination and the spirit of exploration.  I have to imagine that Dhoni these days is not the same as it was when I was growing up.  I am sure that the place has developed quite a bit and that one would be quite disappointed if one were to return, not just because the place has changed, but also because the sense of wonder seems to become more scarce as one becomes older, more jaded, and better trained for living and surviving in this world.

So, here I was many years later, a middle aged dude with internal plumbing problems, driving through the mountain passes on Route 15 north of Williamsport, PA, on our way back from Rochester after dropping Christina off at college, still feeling a little bit of that sense of awe and wonder while observing my surroundings.  It is not as if the hills of the Alleghenies are one of the great wonders of nature, but it still does not seem to take too much for me to be impressed when I out in the natural surroundings.  Hill after hill stretched out in front of me as the lanes of the endless highway weaved a magical path from mountainside to mountainside while leaping over the valleys that lay in between them.  Looking at the hills one wondered what it would feel like to be on top of them.  My instincts told me that I should explore the mountainsides on foot and look down on the valleys, the lakes, the rivers.    So long as it was a new experience in natural surroundings, it had to be interesting.  It occurred to me that perhaps in matters such as this I was still an easily impressionable little kid at heart – a kid occupying the mind of one who is supposed to be an adult.  Why is it that growing up and becoming a responsible person appears to be a somewhat orthogonal process to finding a way to continue to enjoy the simple and innocent things in life.  Something is wrong with the way we are being taught to think in this world. 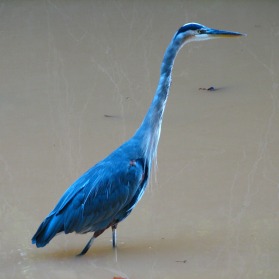