I am not sure if there is anything really special about Ullapool up in the highlands of mainland Scotland, on its western coast, that that makes it more notable than other towns in the highlands.  In a sense, all of these towns and villages are notable just because of where they happen to be, and what you can do in these places.  But we did happen to spend an evening in Ullapool and came to appreciate it a little more than some of the other places that we simply drove through.

Ullapool lies at the end of the approximately two and a half hour ferry ride from Stornoway in the Outer Hebrides.  Since we were getting there on the ferry in the evening, we decided to spend the night in town before proceeding further north towards Durness.

Getting there was an experience in itself. The ferry boat was huge and carrying a nearly full complement of vehicles and passengers, to the extent that our car was carried on an elevated floor/deck in the ship that was suspended from a roof, a floor/deck that could be retracted when not in use.  This was above the level that vehicles traveled on when the ship was not that full.

Ullapool gave the impression of being a typical village by the waters, with Lock Broom  facing it, its harbor with the fishing boats, and the waterside main street. 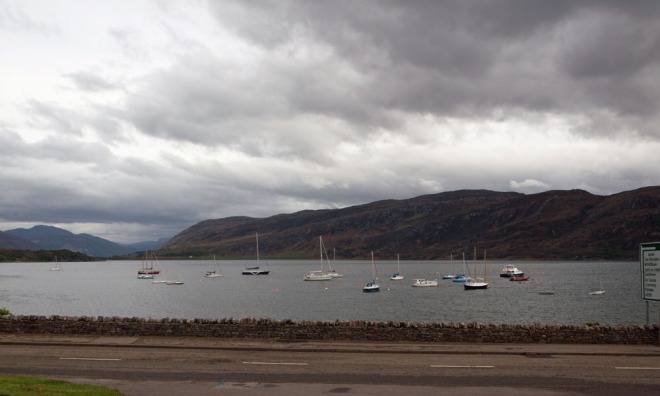 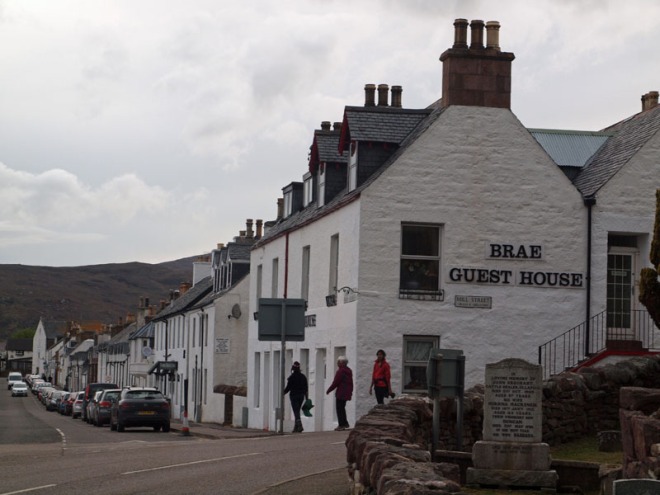 Since we had enough time before sunset, we decided to find a hiking trail to tackle that evening.  The trail that was selected started behind our hotel and the steep climb started almost immediately.  It was unexpected!  Soon we were on a hillside covered with gorse, with a view into Loch Broom and the little town of Ullapool below us.  Our ferry boat was heading back out of Loch Broom to the Sea of Hebrides and on to Stornoway with the sun beginning its descent in the clouds behind the mountains.

The climb continued and did not let up.  We went beyond the initial destination of a bench that we had seen on the mountain from the bottom of the hill.  In the distance we sighted another challenge, the rocky top of Meall Mor.

Some of us could not resist the challenge.  We made it to the top of that hill.  Loch Achall came into view on the other side of the hill, and towards the north stretched a rocky plateau.  One could imagine the Cape Wrath Trail running through this  challenging terrain all the way up to Durness.  Something to consider for another day, perhaps another life. 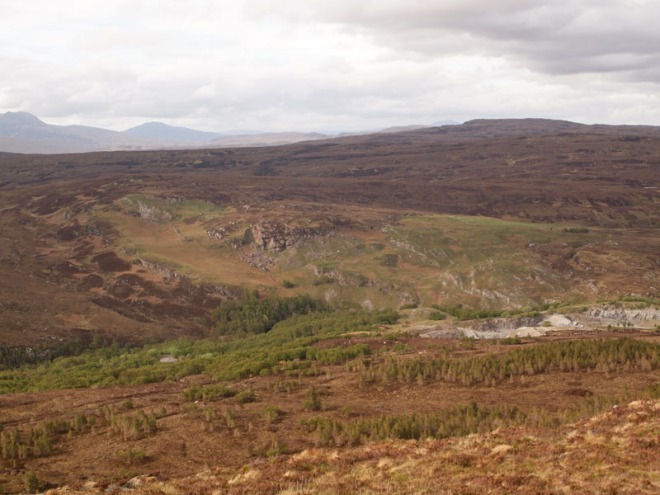 In the other direction lay the end of Loch Broom.

We stopped for a minute to enjoy the view and add another rock to the cairn at the top.  We then turned to head back to town.

The sun was low in the sky when we got back and we set out to find a place to eat.  The pubs were busy but we did find a place to set our butts down and get a dram of the local nectar, a pint of beer, and some pub food.  After that we walked through town looking for the grocery store that we had seen on the map.  We then headed back to the hotel, enjoying the cool evening and the ice-cream bars that had just been purchased.  Folks settled down for the night to watch a horrendous movie called Hansel and Gretel: Witch Hunters.  Some of us rushed out of the room during the movie and ran through town trying to find a good place to experience the colorful sunset that I had gotten a hint of through the hotel window.  We were not very successful.

The next morning we went down to the hotel’s restaurant for another filling Scottish breakfast (which can include haggis, black pudding, sausage, bacon, eggs and beans). We then packed our bags and headed out.  The only other stop in town before we set ourselves on the road to Durness and our next round of adventure was at the petrol bunk.