We made it!  I had to take some time away from the blog for the celebrations, to take care of my friends, and to also try to catch up on my sleep, but I am back to report that  WE MADE IT!

The last day of the ride was from Shepherdstown, WV, to Whites Ferry on the towpath in Maryland.  This was deliberately scheduled to be short ride, and we did in fact finally arrive at our rendezvous point with the support vehicle a little early.  It was a relaxed ride. 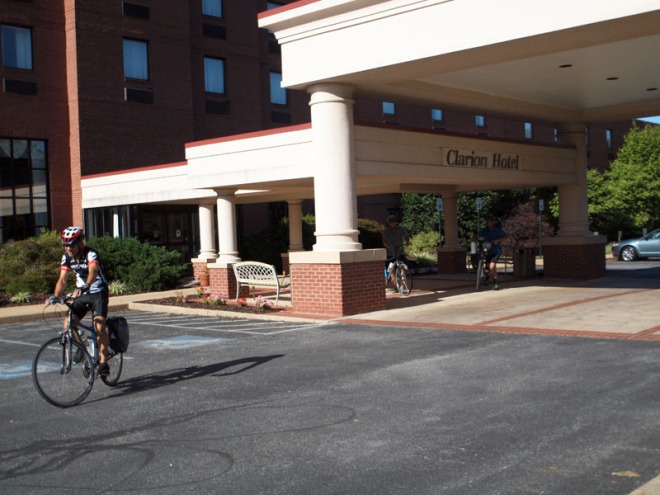 We were back on the trail in short order and proceeded without delay towards Harpers Ferry.  By this time we had established good riding patterns on the trail that all of us were comfortable with, a process that seemed to happen somewhat organically. No words needed to be spoken.  There was no competition to be up in front (or for that matter behind), and it did not matter who your riding companion was.  Conversations could involve all four people, three, two, or even one if you were happier riding in silence at that point, comfortably lost in your thoughts.

We stopped at the remains of Dam 3 just before we reached Harpers Ferry and hopped over exposed rocks in the river bed to chill out in the midst of the flowing water. 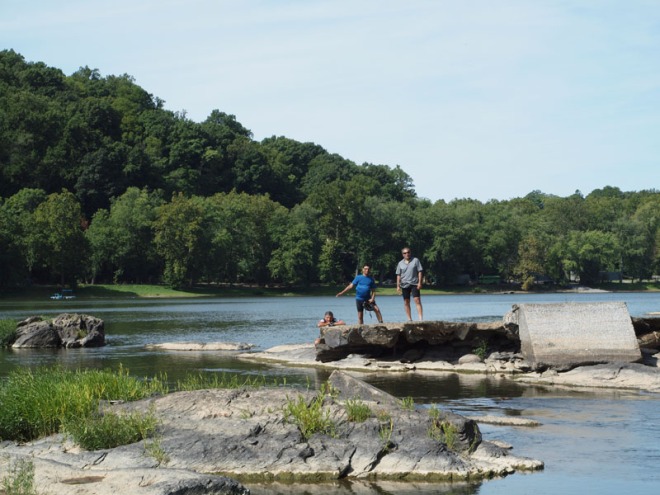 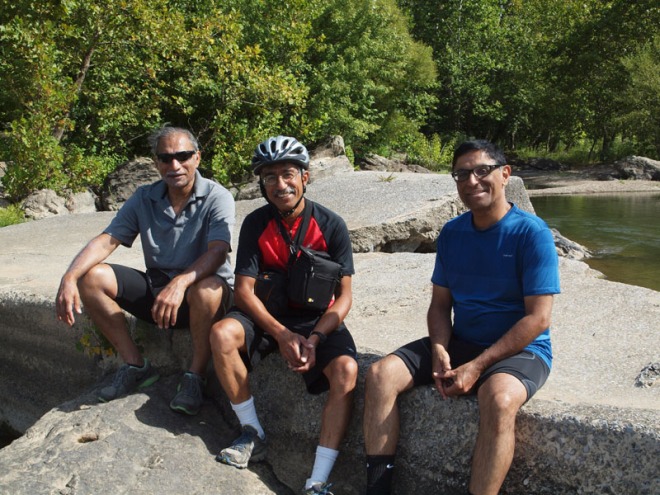 We parked our bikes on the towpath across the river from Harpers Ferry and crossed the bridge into town.  A significant amount of time had been allocated to this destination because there was a lot to see. 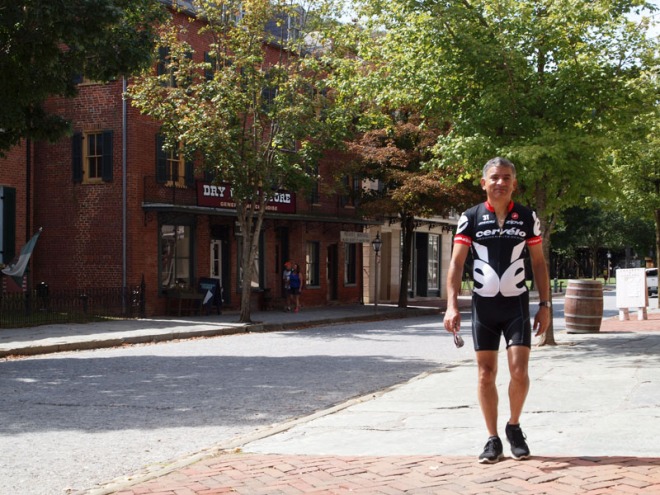 We went up to Jefferson Rock on the hill behind the church. The second picture below shows the Potomac flowing south beyond the point where it meets  up with the Shenandoah river. 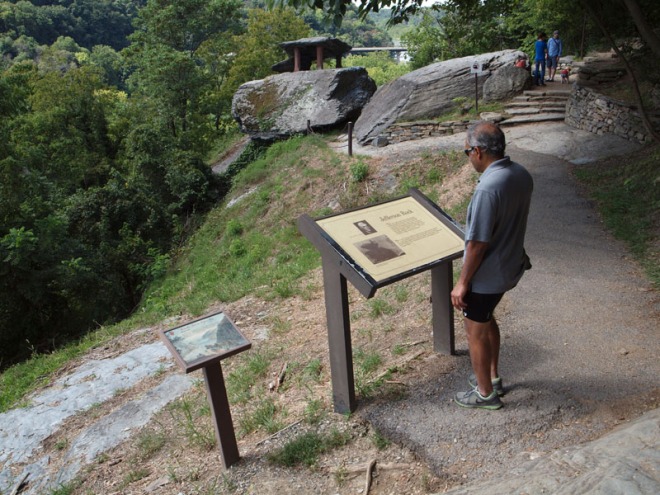 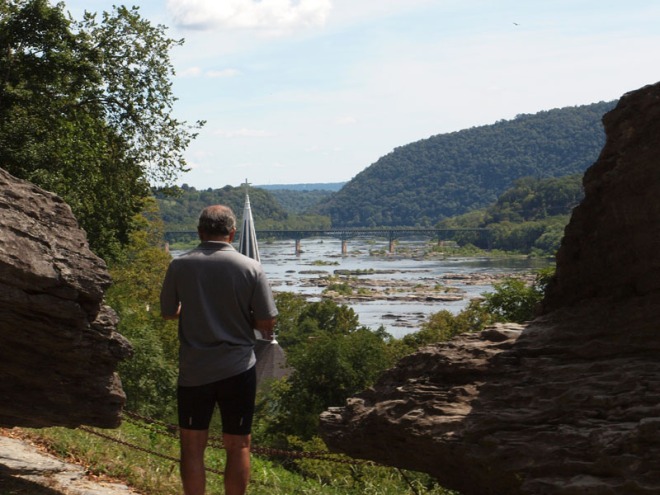 We went back into town to get something for lunch.  The second picture shows the railroad bridges across the Potomac between West Virginia and Maryland. Most of the rail traffic is freight, but there is also a train station in town used by commuter trains and the Amtrak Capital Limited running between Chicago and Washington, DC. 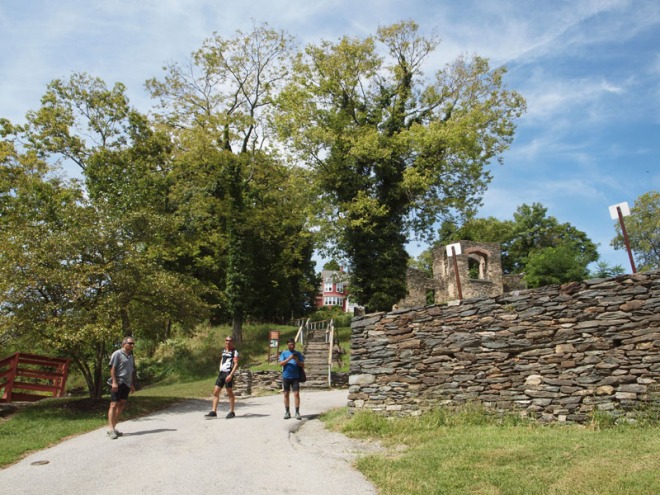 After a lunch that resulted in more calories being consumed than had been expended thus far on the trail, we proceeded back to the towpath and resumed the ride.  In spite of some lethargy because of the lunch,  we were able to resume a good pace once we got back into the rhythm.  It seemed that by this time we had become comfortable with the riding experience.  There were less “butt breaks”.

Our next stop was the Catoctin Aqueduct.  This aqueduct actually collapsed completely in the 1970s (because of the design of the center arch) and was reconstructed in 2011. 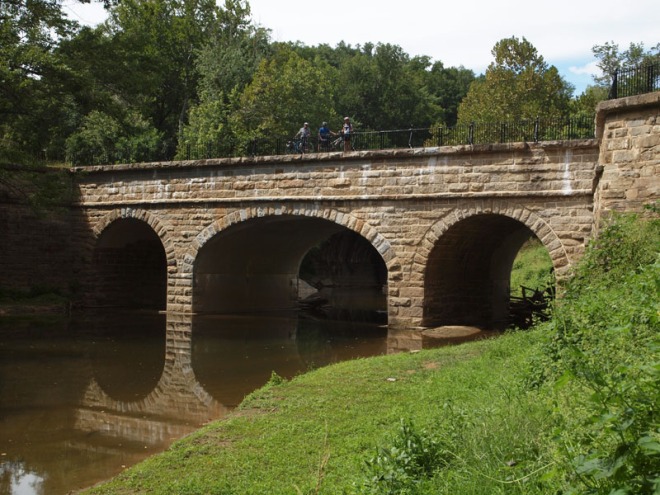 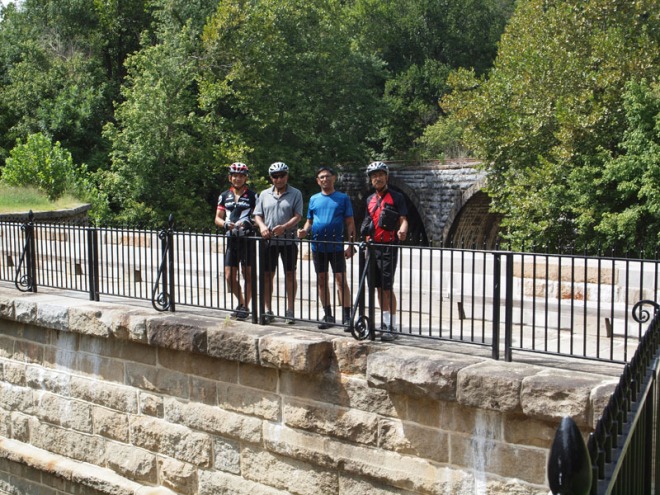 We took a short break at Point of Rocks.  We were making good time toward the final destination while riding at an easy pace. 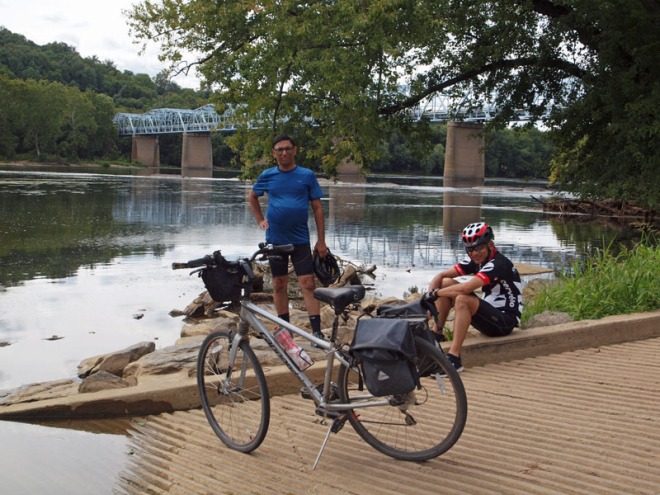 The next somewhat big stop was the Monocacy Aqueduct, the longest aqueduct on the C&O Canal. 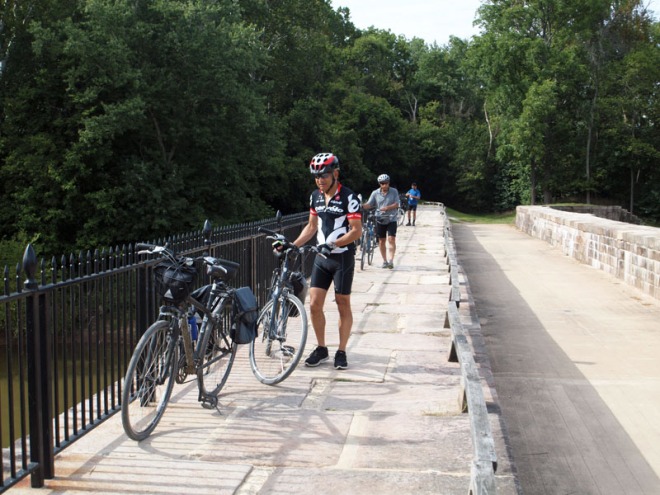 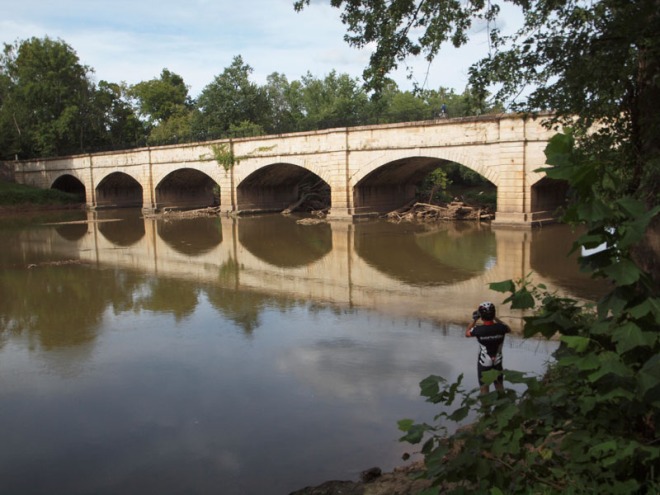 While taking the previous picture we heard some loud conversation taking place on the aqueduct.  We looked up to see that some urgent matter being taken care of over the phone! 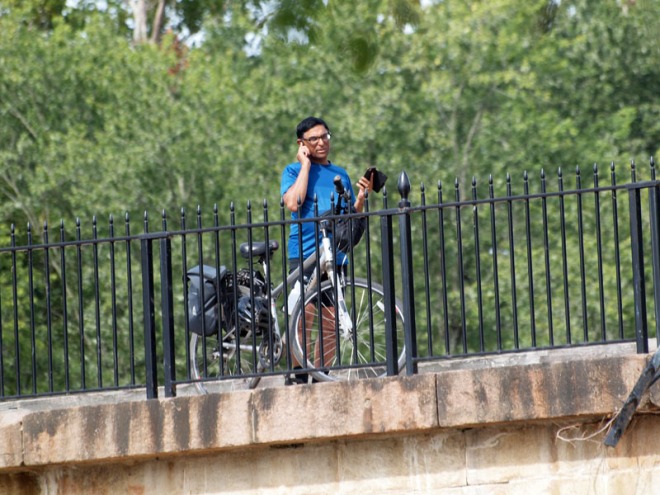 And then it was time to leave for our final destination.  As the entered the last couple of miles of the ride the energy level actually shot up and there was some sprinting going on.  And then we were done! 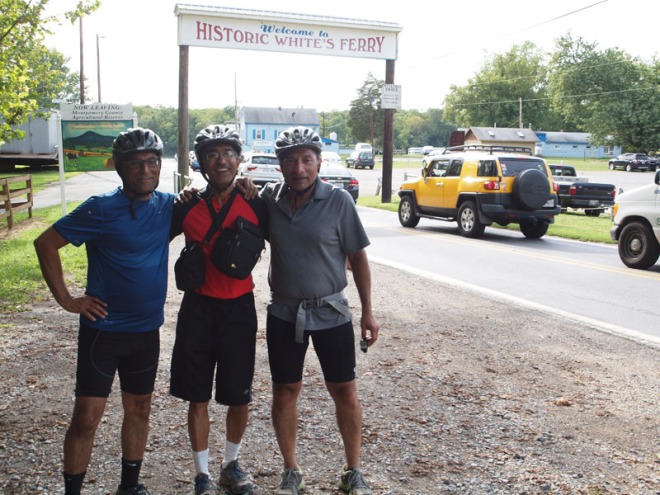 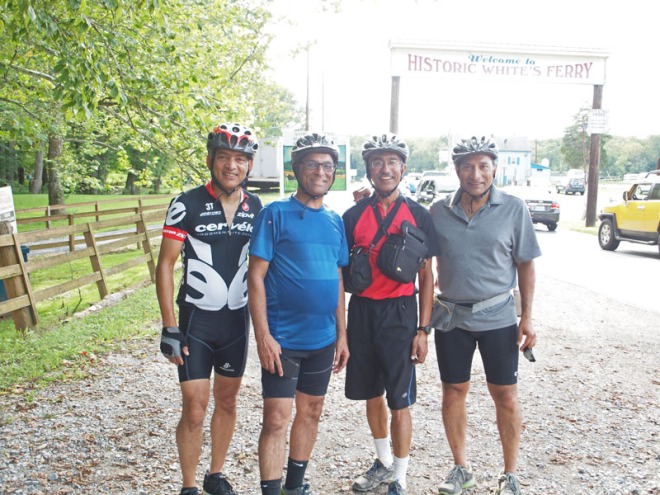 We had to hang out at Whites Ferry for a little while because of a foul-up with the support van.  We watched the ferry in action, and then spent the time chilling out.  Ice cream was consumed in celebration. 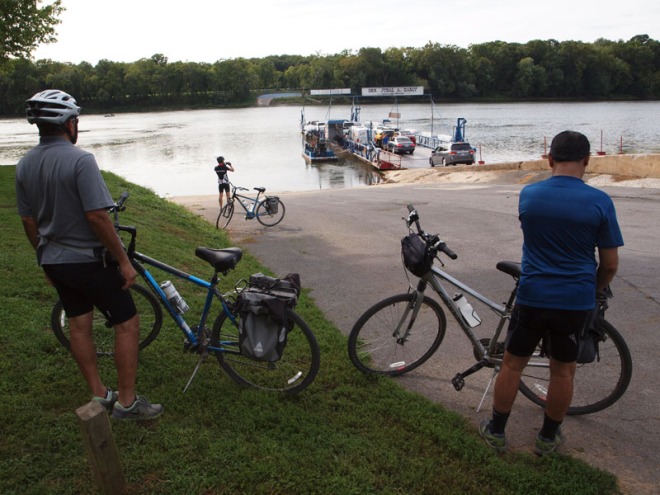 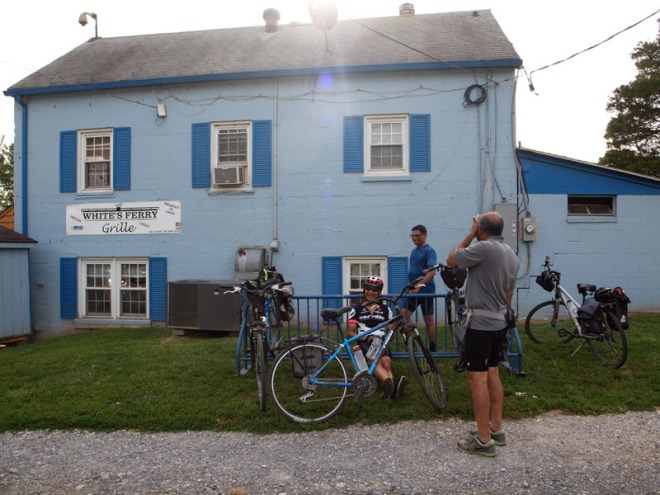 We finally got home about an hour later than expected.  It was time to unwind.  Later in the evening we received some unexpected awards. (Thank you, Mrs. R!) 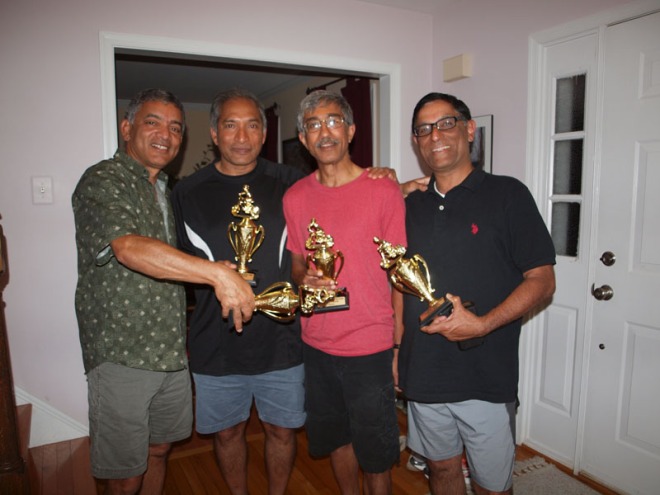 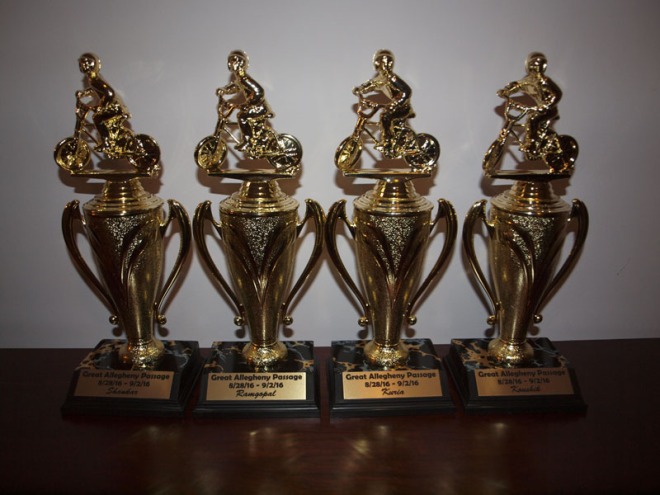 Then it was back to more conversation and singing Hindi songs before we finally went to bed, later in the evening than we ever did during the ride itself! 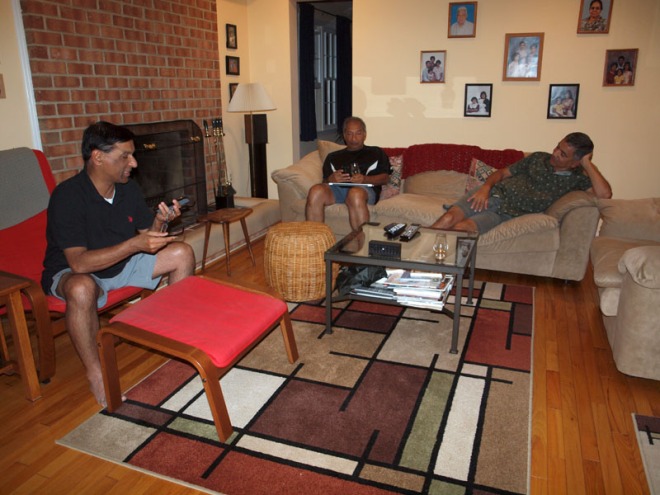 This was an awesome experience.  I am still getting my head around the fact that we got on bikes in Pittsburgh, PA, and finally got off the bikes in the Washington, DC, area, about 300 miles later, after six days of biking, after experiencing America in a way that one would never have been able to if we had, as is customary, gotten in a car and driven the same distance (perhaps in three or four short hours).  There is so much of this land to see and experience outside of the hustle and bustle of the mainstream.  Its beauty, its history, its small towns with their changing ways of life and the struggles for survival, its peoples, all of these are worth knowing and understanding better.  Moreover, it is a lot of fun! As my friend Shankar would say, this is something everybody should try to do at least once in their lifetime!