I was driving on the road from the parking lot at Pennyfield Lock.  I was driving quite slowly.  It was not just the numerous potholes in the road that were slowing me down.  It was very quiet and relaxing out there and I was in no hurry.  Besides, there was an older gentleman walking briskly in the middle of the road in front of me with headphones covering his ears.

I had observed this older gentleman on the trail at Pennyfield lock a few minutes earlier where I had stopped to check out the fall colors.  The colors in our neighborhoods (except for that red maple that we planted behind our house) seemed to be somewhat muted this year relative to other years, but things seemed to be getting better a the tail end of the falling of the leaves.  I drove to the parks in spite of a weather prediction (that turned out to be accurate) that the sky would become cloudier as the morning passed by and that there was a chance of some rain.

In any case, the gentleman was walking with a purpose.  He looked like he did this kind of stuff regularly.  He was proceeding quite briskly in his yellow coveralls.  He had a backpack and I saw a camera hanging from a strap attached to it.  I did not see his water supply, but I am sure he was carrying some.  He had his music.

As the car got closer to this gentleman, I began to wonder if he realized that I was there.  The combination of the headphones he was wearing and fact that I was driving  a Prius that was in its quiet super-efficient mode because of my speed, could have made me difficult to notice. Since he was in the middle of the road,  I decided to drift off to the side of the road and get closer to him at a slower pace.  I was not about to honk the horn.

I got a response from him.  He shifted the position of his head as if to acknowledge me, and I was not sure if he was irritated by my approach.  All of a sudden he started crossing the road in front of me, to the side I was trying to pass him on.  I had not wanted him to change his position on the road just for me, but I figured out that this was what he was doing.  I reacted by turning the wheel so that the car moved back towards the middle of the road.

The guys raised his hands and signaled, it seemed somewhat aggressively, for me to stop.  As I halted the car, he broke off a stick from a fallen branch beside the road and walked with it across the road right in front of me. Soon he was pushing something that was on the road off of it.  I then saw it.  It was a small turtle and it looked very familiar!  After he had moved the turtle, he signaled for me to proceed. My mind quickly rewound to the incident many years ago when I had also moved a turtle off  a road. That incident had  motivated me to start writing about random stuff, and in some way led to the existence of this blog!  It felt, in a very irrational way, that there was some kind of connection being made across the different times of my life.  Weird!

As I eventually passed the gentleman in my car, I told him that he had done a very nice thing.  He was wearing his headphones, but he nodded to acknowledge me, and continued with his brisk walk.

Here are some pictures from yesterday.  I need to get out today to find out if I will find better conditions for fall photography.  It actually looks much nicer in some spots than I expected, but I also need better lighting to try to bring it all out. 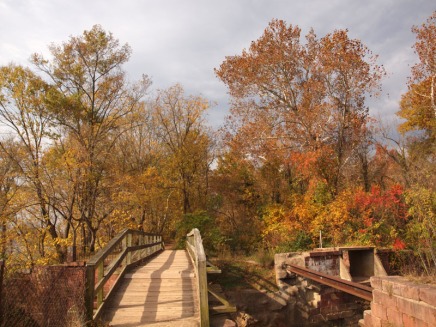 Man on a bicycle 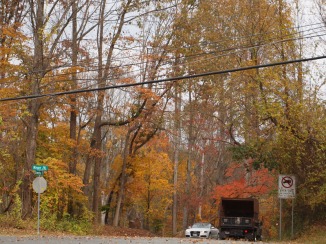