Happy New Year to all!  It has been a while since my last posting in this thread, which was about our second day in Rome.  After a break for some vacation time with the family, I am now able to continue with the tales of our travels. This narration is slowly but surely getting to its end as we head south from Rome.  The energy level of the travelers still remains high as we get ready to move on.

By this time the tour group had greatly reduced in number and we had more space than we needed to spread out on the bus.   Aldo still leads us on!

We knew we were in for bad weather even before we left town. Our bus merged with the rush hour traffic in Rome as Aldo drove us past the Archbasilica of St. John Lateran

and the walls of ancient Rome

on our way out of the city.  The ride to Naples took a few hours through the country side.

We drove past the Monte Cassino Benedictine Monastery on our way, 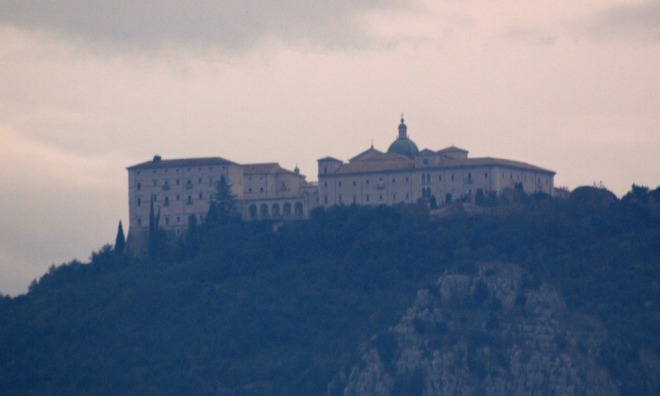 a place that saw some action between the Allied and Axis forces during World War II because of some bad intelligence.

It was around noon by the time we arrived at Naples.  We were taken to a store that did cameo work on shells, a specialty of the city.

Our views of Mt. Vesuvius as we approached the city and then departed were not promising.  The weather was not cooperating at this point.

After the short stop in Naples we drove the short distance to Pompeii to the remains of the ancient city.  By this time the rain was coming down really hard, but that did not dampen our spirits.  We headed for the ruins led by our tour guide.

Ancient Pompeii is quite a fascinating place.  The town existed from the 8th Century BC to the 1st Century AD, when it was destroyed by an eruption of Mt. Vesuvius.  (Mt. Vesuvius is still active and an ongoing threat to Naples and its surrounding area.)  The mountain towers over the ruins, and at one time the sea used to come all the way up to the other side of town.  Much of the town is still preserved and accessible in its original architectural shape and form. This is because it was destroyed not by lava, but by the ashes from the eruption.  As a result, you can see all the artifacts of the town in well preserved form when you visit.  What you see are the outlines of a highly developed city, with a very mature city structure and operation in place, much as you would see in a city in more modern times.

The streets were made of stone to handle the heavy wheels of the vehicles of those days, mostly carts, I assume. 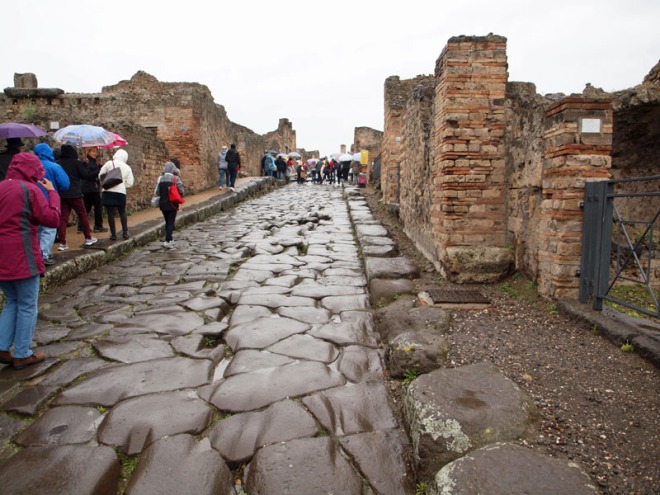 You can still the see the marks of the wheels on the stones.

The streets even had crosswalks. 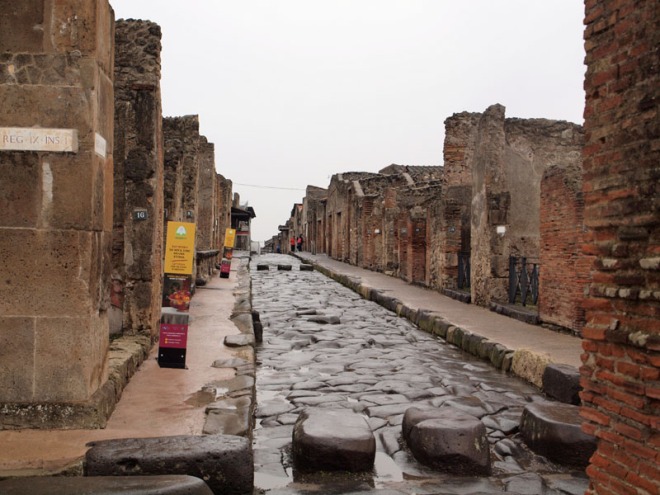 There were homes and other buildings that lined the streets.

There were cafeterias that served food to the people who lived there.

These cafeterias were used by the common people and not the rich who could afford to have people cook for them.

There were bath houses with separate sections for men and women. These places had baths at different temperatures using water heating processes built into the buildings, the frigidarium or cold bath room,

the tepidarium or tepid bath room,

and the caldarium or hot bath room. 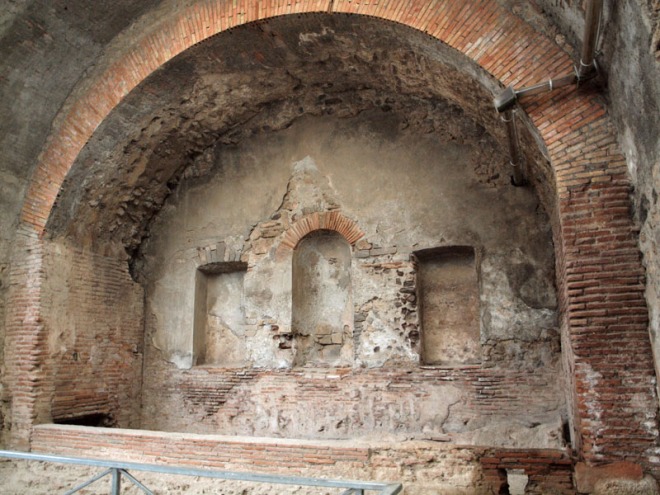 They had water pipes to supply water to the city.  (They used lead in the pipes, but it was not as damaging as one would expect, and as it happened in other parts of Italy, because the lime in the local water ended up coating the pipes.) 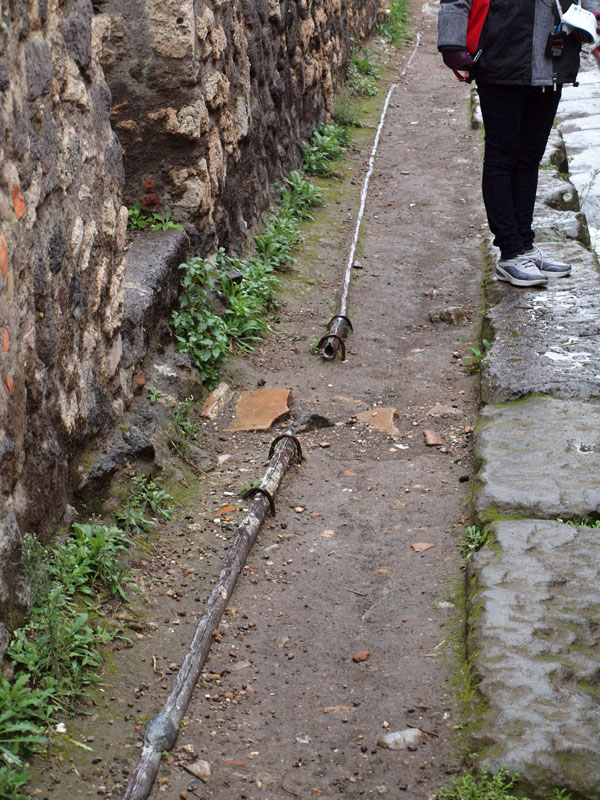 They had outdoor water facilities for the common man. 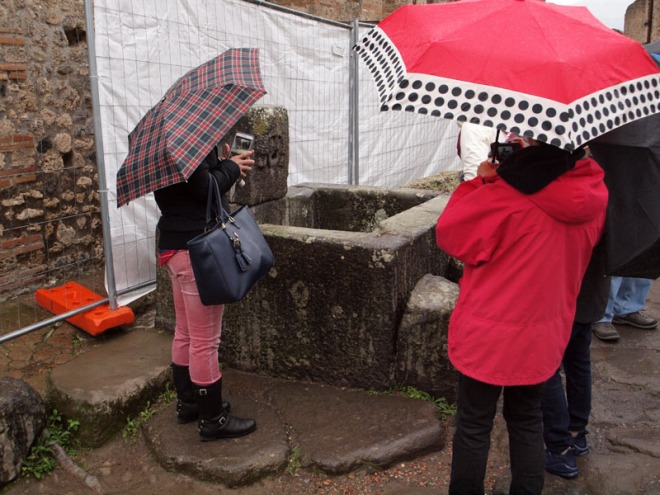 The brothel even had a road sign on the main road for strangers to find their way to it, 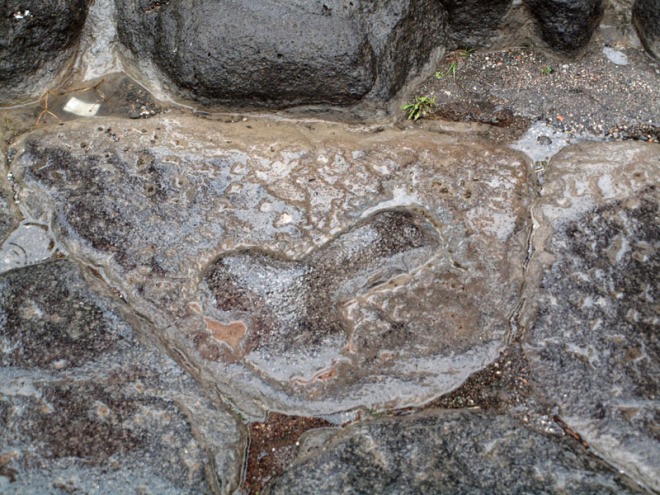 and even a menu on its inside walls for the customers to choose from.

The area of the forum at Pompeii

is surrounded by civic buildings and temples. They have a section of the ruins where a lot of the artifacts recovered from excavations are stored today. 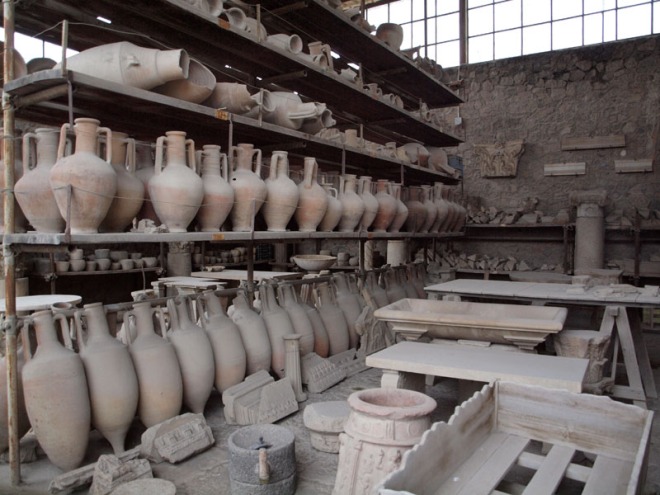 There were a few arenas for entertaining the public.  The one pictured below is still in use. (The white stones are the only original ones.  The rest have been recycled!) 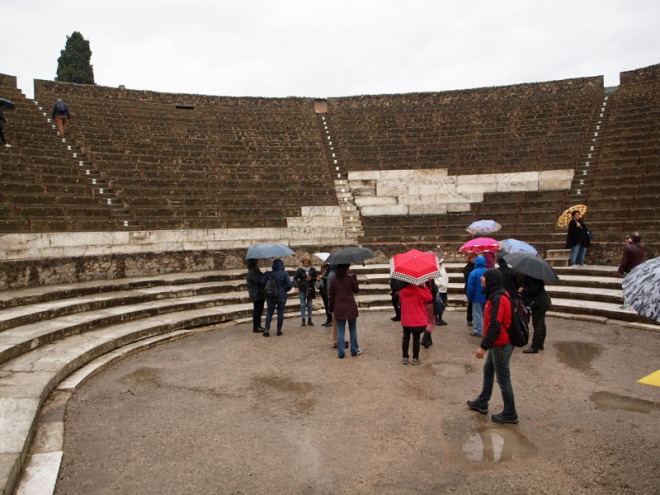 There is also artwork outside 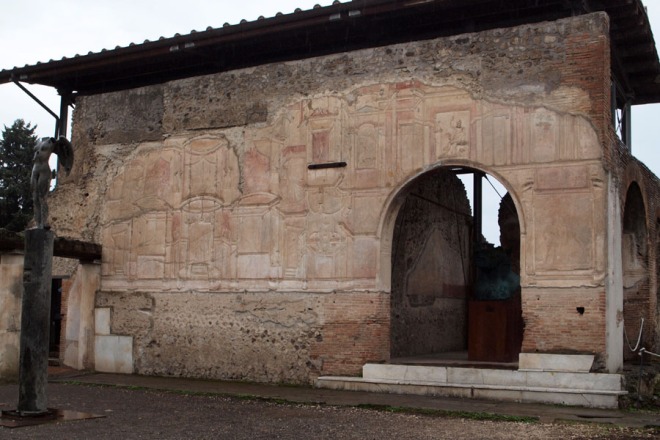 It is fascinating to see the human bodies caught in their moment of death. 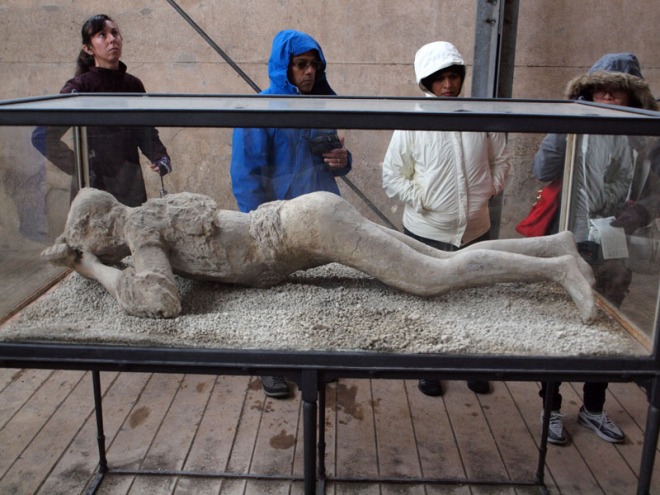 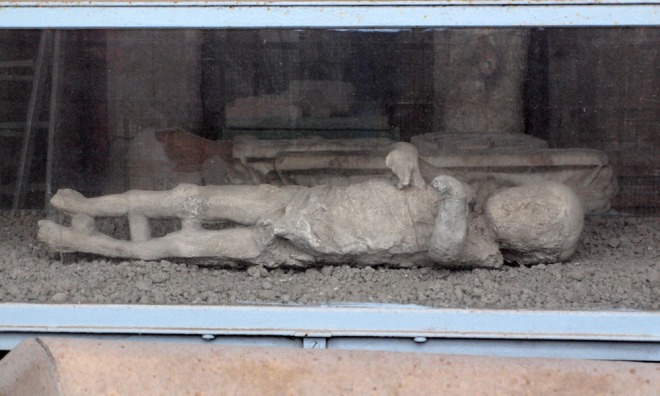 Their body shapes were preserved because they were killed by the poisonous gases rather than lava, and then surrounded by ashes.  As the body decayed within the surrounding material, an empty space including the skeleton was formed.  Archeologists filled this space with a plaster and broke away the surrounding material to reveal the original shape.   The shape of this dog that could not escape, probably because it was tied up, is fascinating.

The tour covered only a small section of the ruins but that was enough for some of us who were somewhat uncomfortable because of the cold rain.  We were happy to go indoors and  find a place to warm up, and also some hot food for a somewhat late lunch.

After lunch we walked back to our bus for the last part of the ride for the day.  We were headed to Sorrento.  We left the city and climbed into the hills as we approached the beautiful area of the Amalfi Coast.  As we approached Sorrento we drove down a mountainside with a beautiful view of the Tyrrhenian Sea off to our right.  We could see the town of Sorrento nestled on a cliff-side in the evening light.  It was quite picturesque.

Aldo dropped us off at the hotel, and then it was time to say our good-byes to him since he was heading back to Rome with the bus.  We thanked him for bringing us all the way from the north of Italy to its south safely.

The hotel itself was really nice and quite quaint.  It was an older establishment with a lot of character.   All of us in the tour group got rooms on the top floor with wonderful views.  Some got a view of the bay with Mt. Vesuvius on the other side of the bay.  Some of us faced the mountains behind the town.  We had a nice terrace area next to our room that was not very usable at our time of arrival because it was still raining. 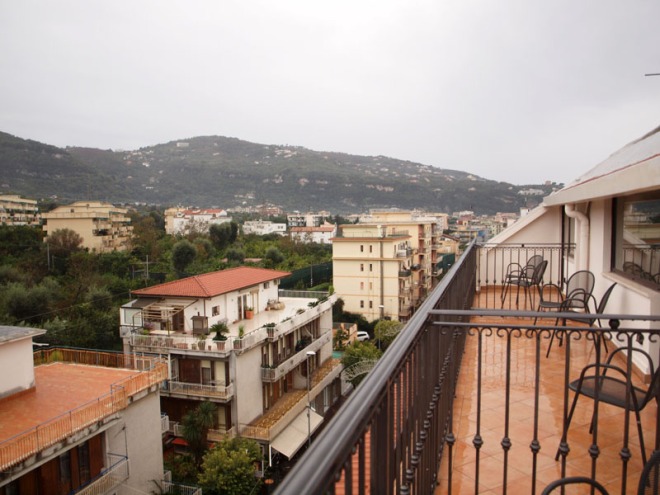 There was a rooftop garden area near our room with great views in all directions, a place I would visit with my camera later.

After a short period of rest, we headed out to the center of town with the rest of the  tour group.  It had turned dark by that time.  It was a short walk and the rain had subsided by then.

Folks were given the opportunity to shop in town.  From there it was onward to the restaurant for dinner.

Alessandro had arranged for a demonstration of pasta making by the owners of the place.  Three different kinds of pasta were made by folks selected from the tour group.  Directions were given by a gentleman who was quite entertaining, while his mother stood by to assist.

The mother (whom you can see in the background in one of the pictures observing the proceedings very carefully) was probably the person who was the brains behind the cooking.  I suspect that the son learned what he knows from her.  What I learned was that making pasta is somewhat simple and there is a lot of feel that goes into the process rather than sticking to strict measurements and proportions.  By the way, some Italian cooks do not take too kindly to the mention of Parmesan cheese as used in the US, which is considered a low quality product used in place of real parmigiano cheese.

Dinner with the customary wine was really good.

There was musical entertainment by a lady singer who accompanied herself with a karaoke type setup.  It was a laid back affair, but, for some reason or other, it did not really hit the spot in the same way that previous musical dinner experiences had done.  C’est la vie!

Some of us walked back to the hotel after dinner.  It was good to work off some of the food.  We were ready for bed.

Our smaller group of six from Maryland was going to be on its own the whole of the next day because we had not signed up for the optional trip to the Isle of Capri.  We had to plan some activities for ourselves, and different folks had different interests.  Seeing that the place was very scenic and hilly, the two of us were mainly interested in hitting the trails leaving town in the morning in order to explore the countryside.  Others were less interested in a hike and simply wanted to enjoy the sights in town after taking it easy in the morning to recover and recuperate.

2 thoughts on “Our Italian Holiday – Onward to Pompeii and Sorrento”