The visit to Carson City in Nevada was an afterthought that occurred only after we had already started our vacation, after we had left San Francisco on our multi-day drive through California and Nevada.  Our visit there strengthens my opinion that a vacation experience is not just about going to well known places and looking for the extraordinary.  Sometimes you can enjoy the simple experiences and things that would not be considered noteworthy in the normal course of events.

We had spent the night in Reno and were about to head south in the morning, along the eastern shore of Lake Tahoe, on our way to Mammoth Lakes for our stopover for that night.  The thought had occurred to me that it would be nice to take a short detour to Carson City if possible just for the heck of it.  After all, Carson City is the capital of the state of  Nevada.  The only other item of note as far as we were concerned was the fact that Mark Twain had spent a few years of his life there.  Still, we were curious. Perhaps there was something new to learn by visiting the town.

But a detour to Carson City from Lake Tahoe would take up additional time just for the driving even though the two places were close by, especially if we wanted to visit the entire eastern shore of the lake (which would involve driving back and forth between the two places).    We could save time visiting just the top half or the bottom half of the east shore of Lake Tahoe, while cutting east-west between the two destinations just once at the half-way mark.

We awoke to threatening skies on the morning of the drive.  This was a view from our hotel room in Reno.

Since driving on the winding roads in the area of the lake in the rain was not likely to be fun, we made a quick decision to head straight down to Carson City and to try to get to Lake Tahoe later in the day.

Carson City looked quite underwhelming when we arrived.  It looked small and unimposing.   It did not look like the capital of a state to me!  The city appeared to have one main drag, Carson Street, that went from north to south, with a few smaller streets parallel to it, and others cutting across in a grid.  I could see no big buildings typical of a big town, let alone a capital city.  The houses were modest in size and older.  There was hardly any traffic on the main road.  The place certainly looked laid back, and as if it had seen better times.

It was time for us to learn more about Carson City.  We drove down Carson Street to the Visitor Center to get information.  We learned that Carson City was named after Kit Carson, and that one of the important historical markers in town was the mint which had now been converted into a section of the Nevada State Museum.  We got a map of the city and a description of a walking tour of about 2.5 miles that covered all the noteworthy sights in town.  (Yes, the town was small enough to be covered that easily!)  The path taken during the walk was called the Kit Carson Trail. 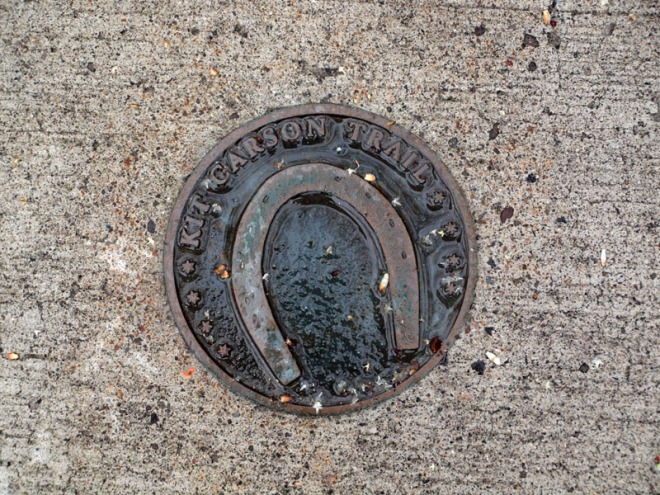 The kind lady at the visitor center told us that we could park almost anywhere, except at the visitor center where the meter lady would make an occasional appearance.  There was ample parking in front of the houses on the side streets.  It was certainly a nice change to be driving in a city where one could relax and not worry about some impatient person who wanted to get in front of you, or about finding a place to park.

We had a choice of going to the museum or taking a walk along parts of the Kit Carson trail.  We started with the walk since it was not raining at that time.  The main drag, Carson Street, was mostly empty of traffic.

Many storefronts on the street looked like they were shuttered down and in a state of disuse.

We walked past the obligatory casino in town.  It appeared to have seen better days (and this was true of most of the casinos we saw in small towns in Nevada). 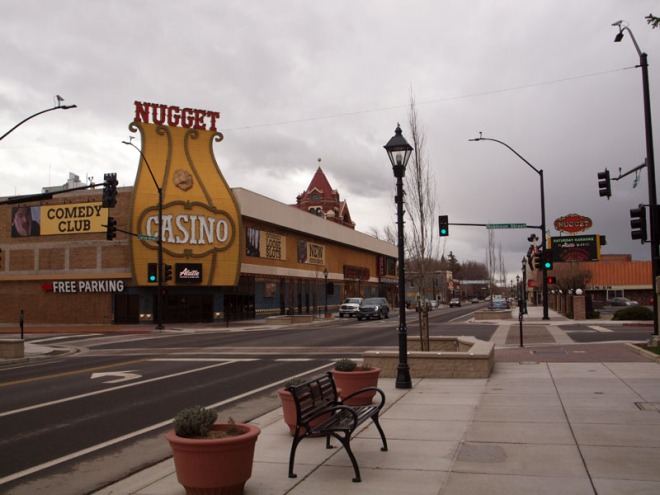 You can seen the sign for an abandoned casino next to Cactus Jack’s casino in the picture below.

The following building was the only one of note in that section of the strip. 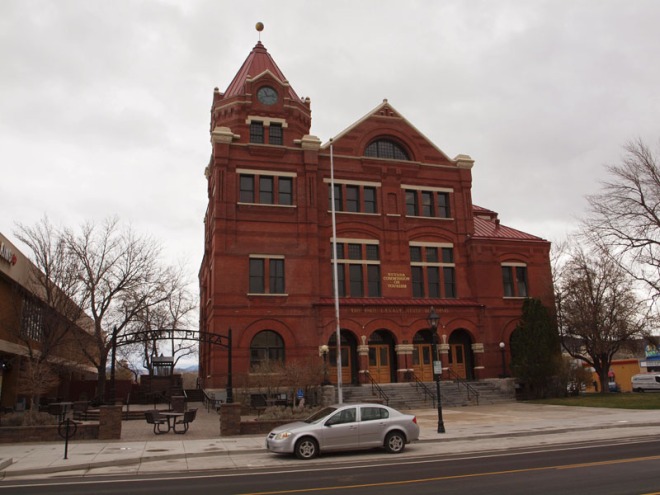 The side streets had an equally empty feel about them. 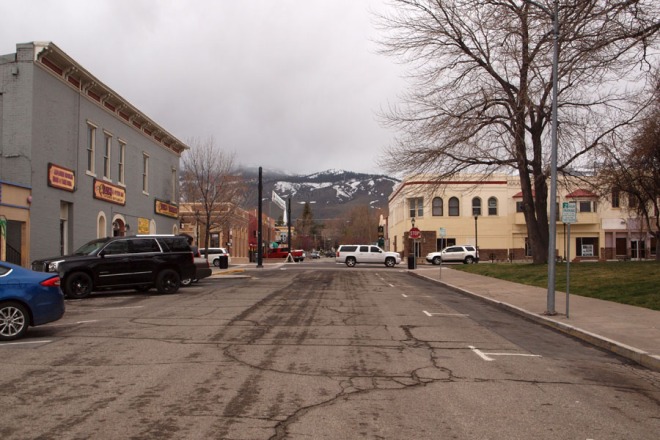 You would have a hard time believing that you were in a capital city.

But in very short order we found ourselves on the grounds of the Nevada State Capitol.

We did indeed see a few people in somewhat formal clothes walk in and out of the building, indicating that some sort of business of note was taking place in these offices.  This contrasted with the feel of the rest of the town itself.  It did not seem to take itself that seriously!

Our next stop was on one of the side streets off the main road, at an art gallery that Angela had found in the city guide.  The rain was beginning to fall steadily at this point, but we were OK since we had our rain gear with us.  I saw this other art gallery on the way.  It seemed to blend in well with the “small” nature of the place.

The building pictured below was our destination for this visit.

They were having an exhibition of entries from a statewide art competition.

On our way out of the exhibition, the lady who was manning the information table (a turn of phrase that might be considered inappropriate by some :-)) noted that she spent a lot of her time giving tours at the museum.  She then gave us a strong recommendation to spend some time there.  Seeing that the rain was not slowing down, we decided that this was indeed what we would do.

We continued our walk along the Kit Carson trail (marked in blue on the sidewalk) on our way to the museum.  The skies began to clear up a little bit (temporarily, as it turned out) as we walked.

We passed the building where Mark Twain had lived for a few years.   (Mark Twain actually followed his brother, Orion Clemens, the first Secretary to the new government of the Territory of Nevada, to Carson City.)

The building appeared to be owned by an Insurance Company!

We continued to walk the back roads of the city.

Closer to the museum, on Carson Street, we passed memorials for the Lincoln Highway, the first coast to coast highway, and the old Pony Express, the paths of both of which used to run through Carson City. 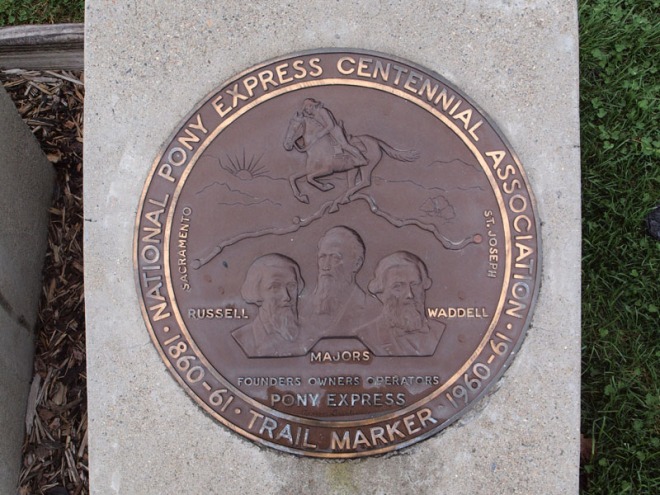 We arrived at the museum, passing by the old mint building on our way to the entrance. The visit turned out to be quite interesting.

They had a reconstruction of a mine at the lowest level of the museum.  This covered all aspects of the mining process including the construction of the underground structures, the extraction and supply processes, and the safety elements of the operation.  This is a picture of a slide that was used to move material from one level to another below it within the mine.

Silver and gold were mined in these parts, and mining used  to be a significant source of employment for people.

There was a section on natural history, including displays about animals and birds, and the about the geology of the area.  The place has a history of significant volcanic activity. They tackled the more recent history of human settlement in that area.  European arrival in Nevada is actually a very recent happening (in a relative sense).   They had a separate section in the museum put together from the Native American perspective (which can be quite different than the White Man’s way of thinking).  There is some tension even today between the Native Americans and the “modern world” in many regards.  The Native Americans try to live in harmony with their surroundings whereas modern man was (and still is) more intent on taking control over and exploiting their surroundings and resources.  We found out that whereas modern man has no hesitation or compunctions about digging up ancient Indian burial sites to study and try to understand life in olden times, the Native Americans believe that their ancestors are to be left alone in their quest for eternal peace in the afterlife.  Even though I have my own scientific curiosity,  I know where my sympathies lie.

The rain had returned with a vengeance as we prepared to leave the museum.  We headed out to a cafe that had been recommended to us for lunch.  It was called the L. A. Bakery Cafe and Eatery.

The place was a delightful surprise.  The family had opened the cafe in 2012, selling healthy foods with a light Mediterranean touch. The business seemed to have caught on and become a success with the local population.  From the plaques and other hangings on the walls, I gathered that they had received recognition from the local community and accolades from the local business groups for what they was doing.  They were in the process of expanding their business.  The food was really healthy and tasty.  (I wish I had taken a picture of my salad!)

It was still raining after lunch.  Given that we had stayed longer than we had anticipated in town, and since the weather was not really cooperating, we gave up on making the side trip to Lake Tahoe and decided to take the most direct route for Mammoth Lakes.

Since we had some more time on our hands because of the change in plans, I suggested that we visit the railroad museum, one of the two more significant tourist destinations in town noted in the tour guides (the other one was the state museum).  We found out as we were driving towards  the museum that we had arrived in town on the one day of the week that it was closed. We had to satisfy ourselves with a drive past in the rain. 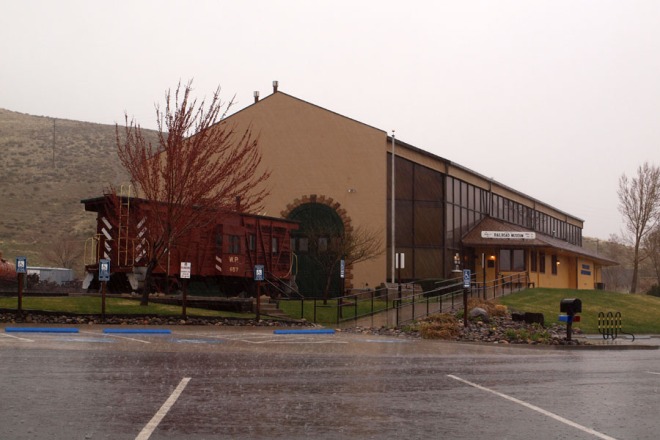 Then it was on to Mammoth Lakes for an earlier arrival than originally planned.  The weather kept changing during the drive.  We even saw a rainbow at some point,

but later on, as we climbed into the mountains, we also ran into a few heavy snowstorms that came out of nowhere and presented some fairly challenging driving conditions every once in a while.

But I will leave the stories of our further adventures during this trip for another day.

One thought on “Carson City, NV”