This was the first place we went to in Death Valley. The crater is located well north of the main gathering place for tourists arriving at the park. We had to get off the main road that runs through the park and drive to a more remote section of the valley.  It was well worth the detour!

Ubehebe Crater was formed by a volcanic explosion, but is was an explosion of steam rather than lava. The explosion was caused by the underground magma meeting up with the groundwater and sending the water upwards as steam.

It was extremely windy when we arrived at the crater, and the occasional gusts of wind had you spread your feet to seek some kind of a balance. You were completely exposed to the elements along the rim and there was nothing to support you!  It was extremely hard going, trudging up the hill on the loose sand (which, on the other hand, seemed to have the benefit of anchoring you and preventing you from getting blown away into the crater) as we climbed along the rim to get a view of Little Hebe crater.   When we got to that point, rather than return to the parking lot directly, and in spite of the challenge of hiking under those conditions, we decided to  complete the loop around Ubehebe crater.  I had to work up my nerve to walk along the edge (which under these conditions appears to be narrower than it really is!).  The wind, and the surface of the trail, which looked loose and a little unstable in some parts, did not help.  But if others could do it, why not not us?   And we did it!

We did not try to descend the bottom of the crater.  It is considered an easy hike going down, but strenuous coming back up.  It was an effort I was not prepared to undertake under the conditions, especially considering that there were other destinations we wanted to get to in the park.

Here are some pictures from Ubehebe Crater.

Against the wind!  This is in the parking lot.  You can see the place we climbed to to view Little Hebe in the distance. 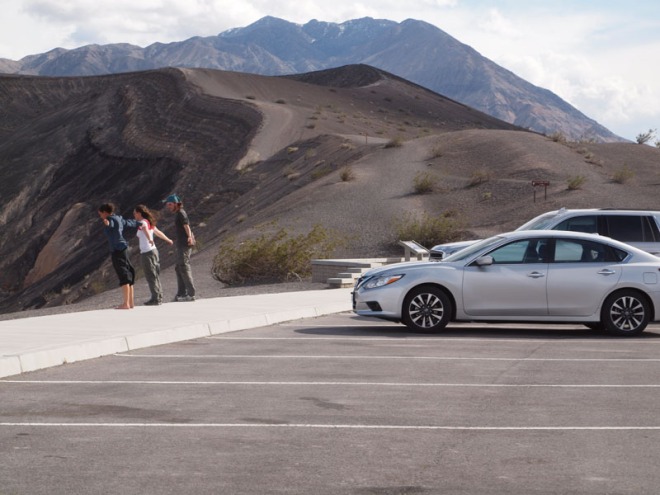 Bracing against the wind while climbing towards the viewpoint for Little Hebe.  The parking lot that we have climbed from is in the distance. 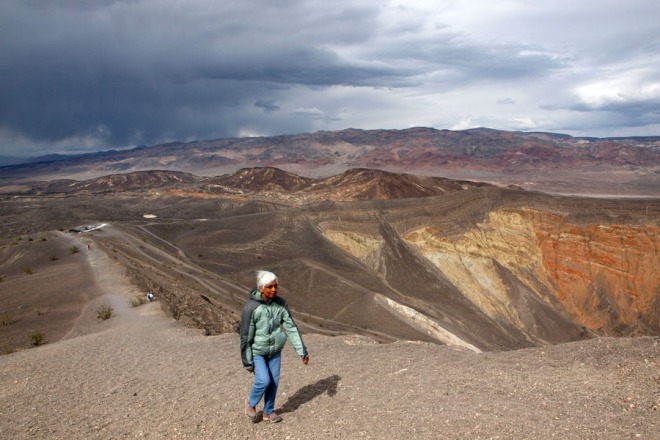 Hikers on the far slope who have gone beyond the stop for Little Hebe. 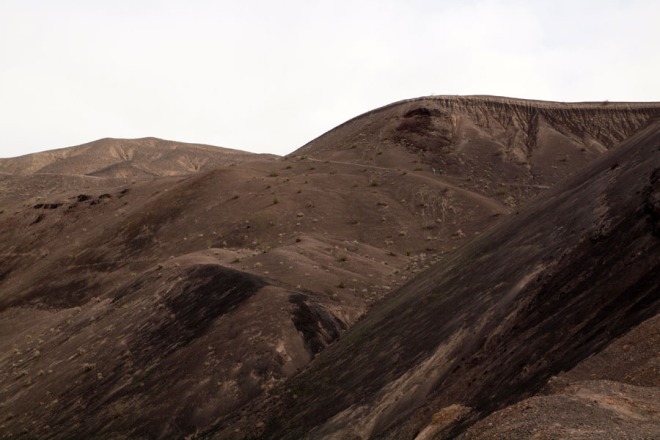 A view of the trail from a lookout.  We had some nice cloud conditions during the hike that lit up different parts of the landscape at different times. 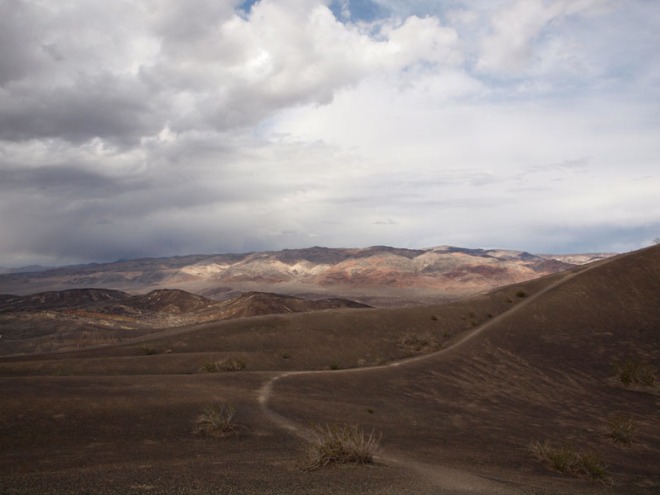 Angela walking back from the far side of Little Hebe. 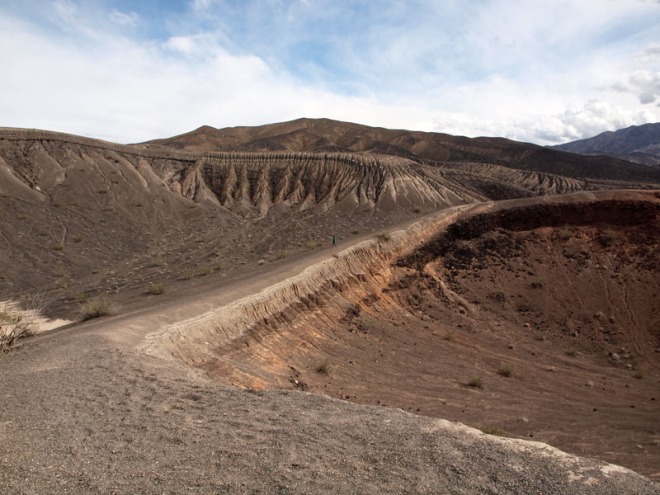 Little Hebe from a distance. 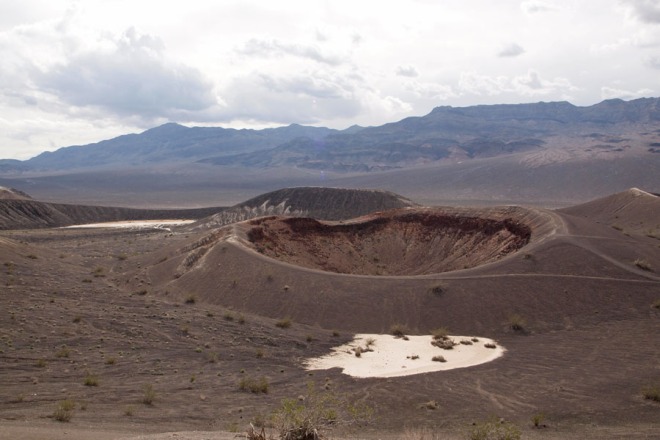 The parking lot and trails to the bottom can be seen in the distance. 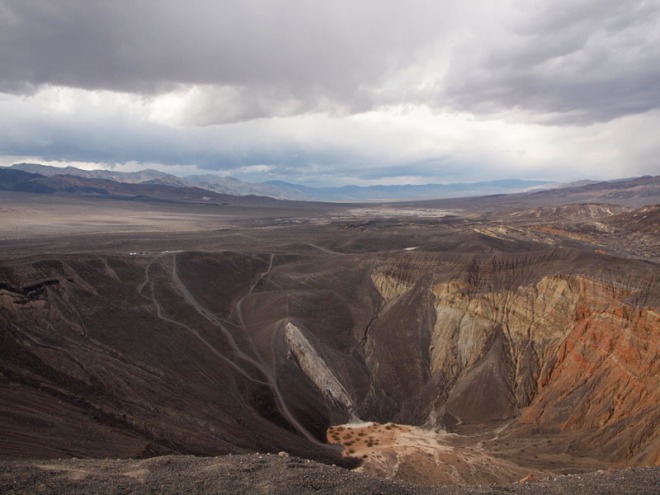 A sandy patch of trail that terminated at the edge of the crater! 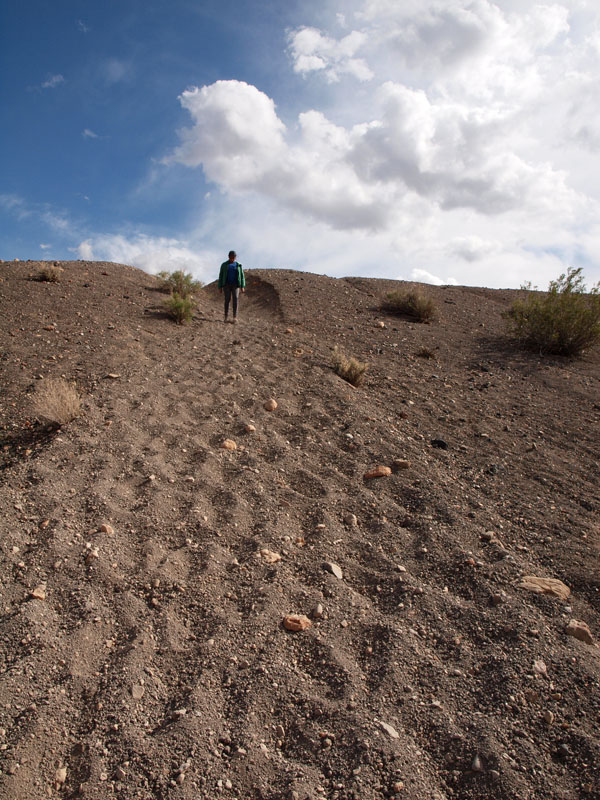 Vegetation on the trail. 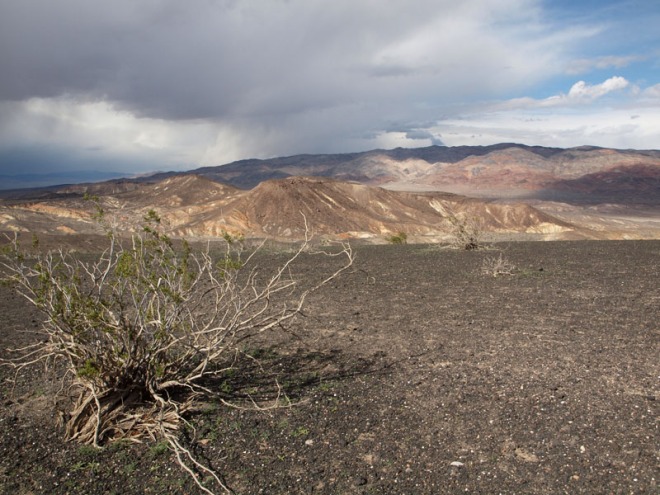 Towards the end of the hike. 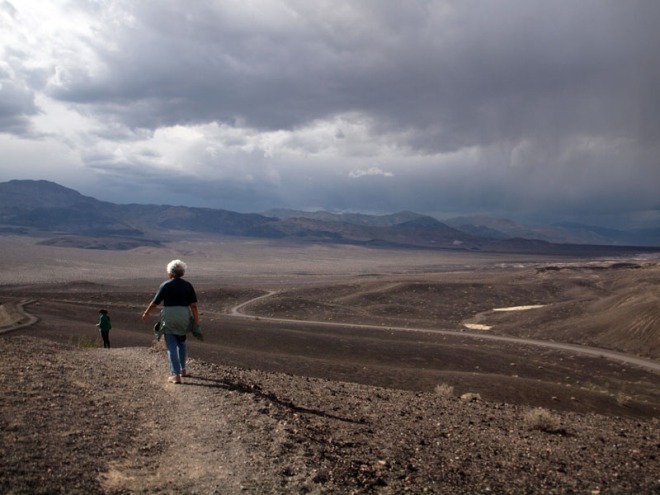