Perhaps there are few of you who are actually following along as I talk about our experiences during the many days of this ride.  Some of you may have even discerned some sort of a pattern (dare I say routine) to the daily experience.  After breakfast together, Ben gets us started for the day with instructions and directions.  He has our bikes all checked out and ready to go. He pulls open up a map on his trailer and talks about where we are going and the nature of the ride for the day.   Once we get going, he stops at places along the route to make sure we are OK, and help us out with whatever we need.  He says we can even stop by at some of these spots if we just need a hug. We usually have a snack stop where Ben sets up a “picnic” with a bunch of stuff to revive us. We may also have a lunch stop along the way depending on the length of the ride that day. We stop along the way to do things.  The rides usually end early so that we have time to recover and do other things.  We gather around for dinner.

The descriptions of the next stage of the ride that Ben provides at various stops while pointing to his map are interesting and useful.  He tries his best at each stop to prepare us mentally for the next stage of the adventure. He does not downplay the challenges shown on the map, like the 8% climb the other day, or the major climb that we did today.   Other sections that are not that steep but are still challenging in their own way are described using terms like “Rocky Mountain flats”, or “downdulations”.  The instructions that we get are very complete.

We have gotten to know Ben well during the last few days.  He is a sweetheart.

Let me now get on with with the story of another glorious day of riding in the Canadian Rockies.

I was up early, as usual.  The places we have stayed at so far are in remote areas.  The hotels or resorts tend to be the only human habitation for miles around.  Network connectivity is generally through a satellite link which has it own challenges.

Crossing the North Saskatchewan river early in the ride.

I actually saw a black bear today!  I was at the back of the group and managed to get only one picture!

We had a long picnic stop at a spot along the Waterfowl Lakes. 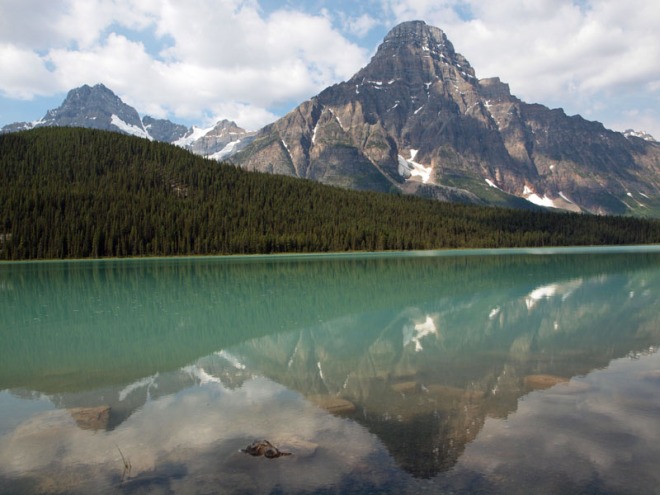 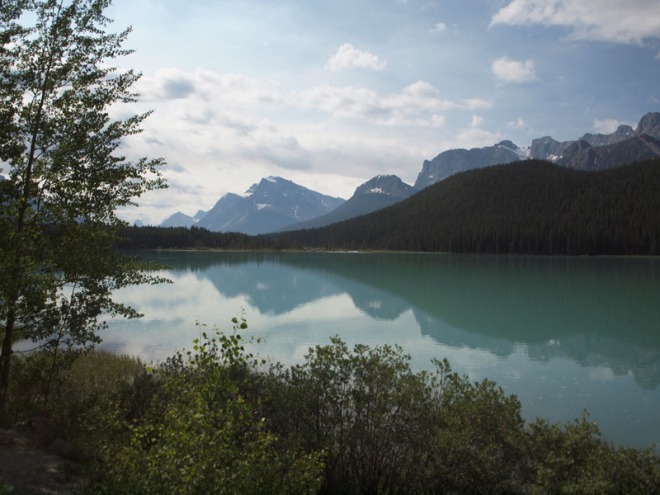 Then it was time to brave the cold, glacier fed, waters of the Lake.

He was the first to actually be brave enough to go all the way in for a swim. 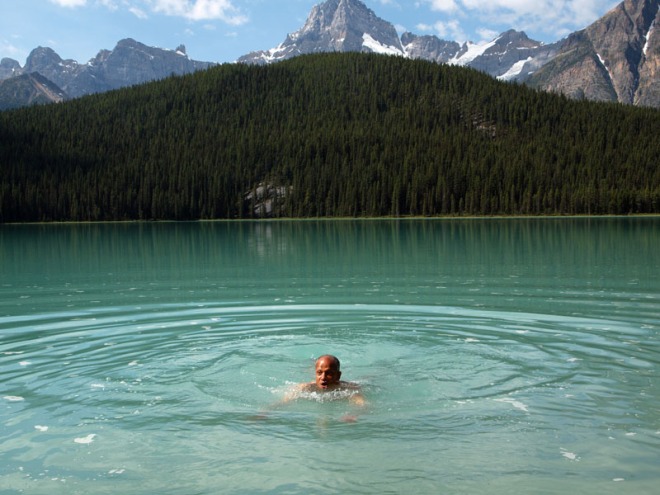 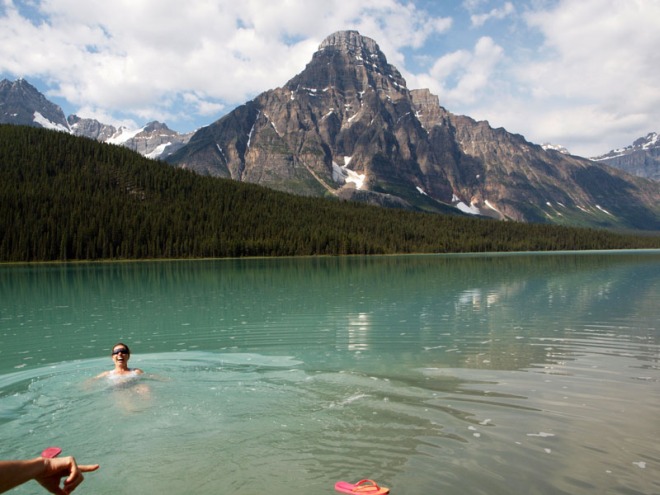 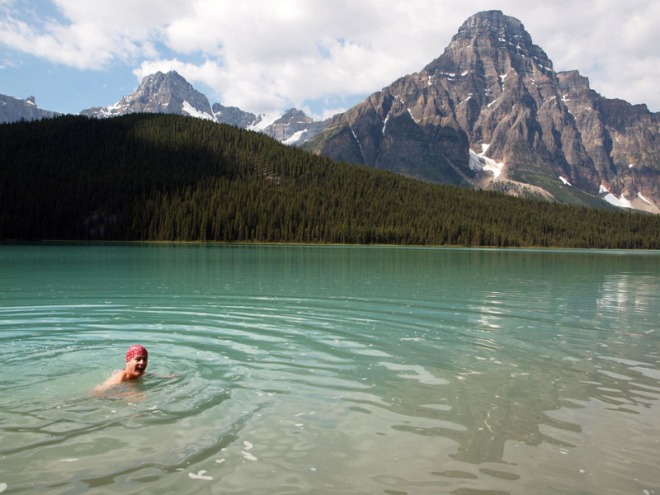 I did step into the water myself, up to my knees. It was freezing.  There was a discussion among the folks experienced in swimming in cold waters and those who were scientifically inclined about what the actual temperature of the water might be, since it was flowing down from a glacier, and since it also felt pretty darned cold! My somewhat unscientific guess was that it was in the 40s – degrees Fahrenheit that is.

As we got going once again, I did stop by to smell the flowers by the roadways. 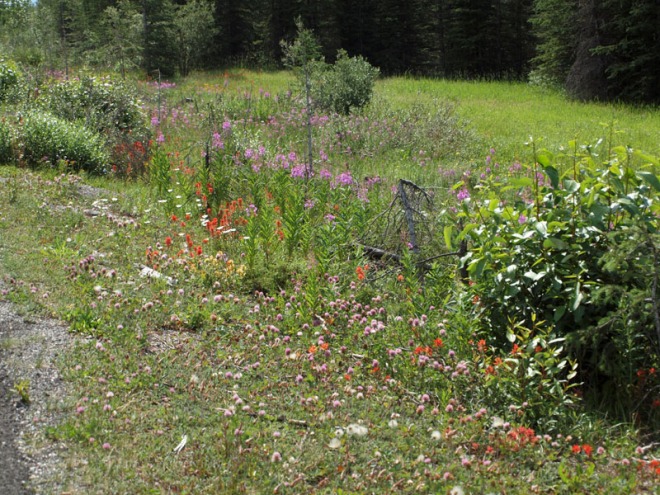 The downhill slope below is actually just before the start of a brutal climb, this time to the highest point that we are to encounter during during this ride.

Bow Pass, the point that we were just about to ride though, is at about 2069 meters.  I was on the lowest gear going up for most of this long and challenging climb.  My thigh muscles were screaming, and I was simply hoping that I would not cramp up and have to stop, because starting up once again on the 4-6% slope in the condition that I was in would have presented an additional challenge. Obviously, I did not stop for pictures. The ride seemed never ending, and every time I came around a hill or over a hump, with the hope of the end of the climb just beyond, there was yet another challenge to overcome. In the end we all made it to the top in grand manner! 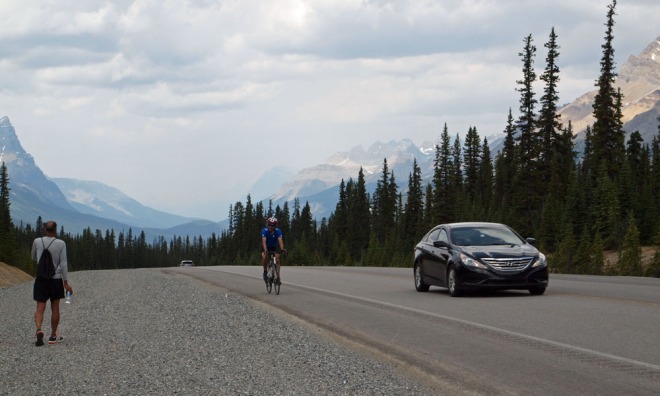 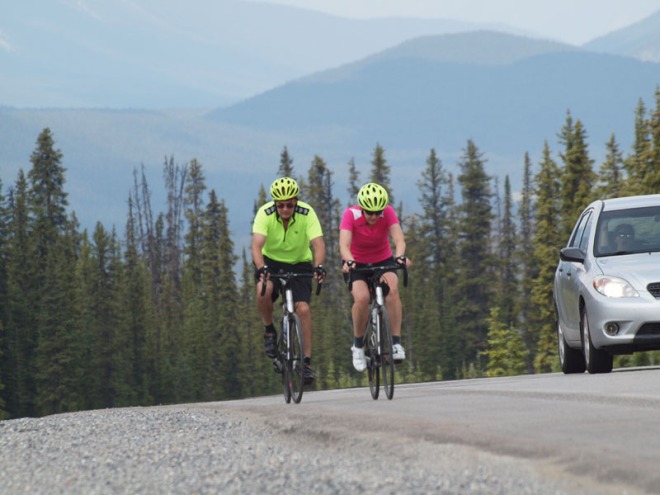 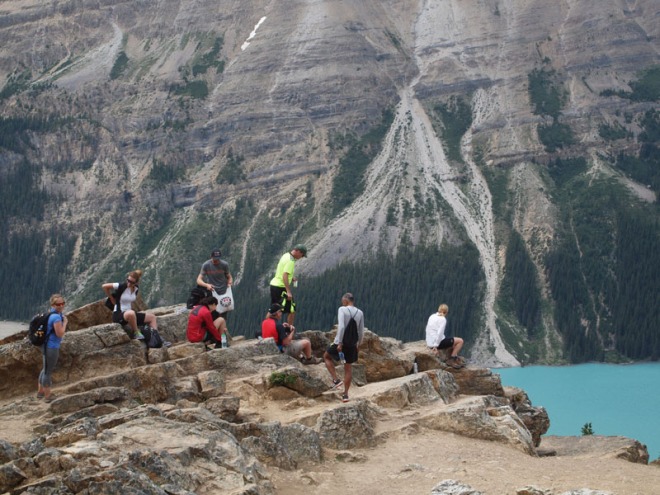 Peyto Lake below us. Off in the distance you can see the direction from which we rode this morning. 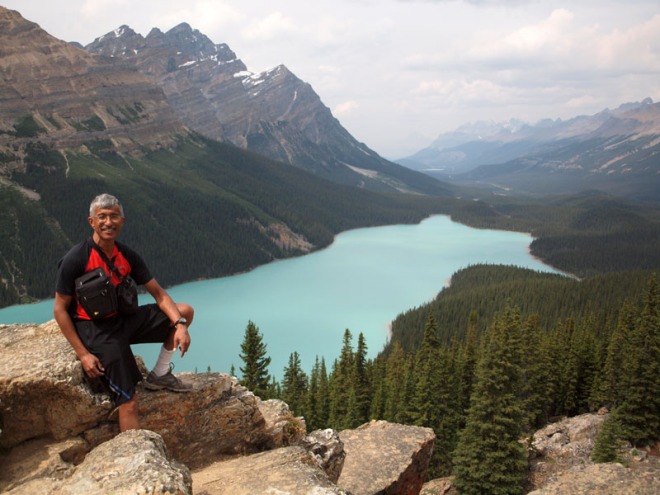 This little guy popped his head out from among the rocks, looking for some scraps, or perhaps the leftover muffin grabbed from the breakfast table that was in a backpack.

I was hoping to make out the road that we rode on this morning, and perhaps even Waterfowl Lake where we stopped by for snacks and swimming, in the picture below.

Then were heading downhill to our place for the evening.

This is our place for the evening, the Num-Ti-Jah Lodge. 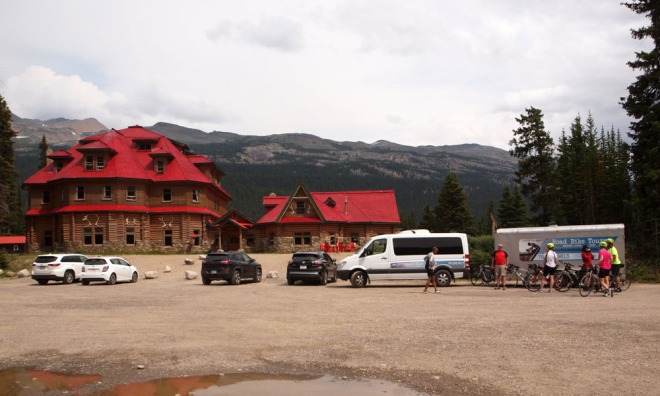 This is a picture of Bow Lake from a window of the lodge.

I was sitting outside the lodge with some of the others waiting for dinnertime when I took this picture.

Slept well last night after a scrumptious dinner and the company of the wonderful friends, both old and new, who accompany me during the ride.

We have gotten past the highest point in the ride, and it is all downhill from now (in a manner of speaking). But I am also sure that Ben has a few “whoopsies” along the way that will continue to challenge us and keep us on our toes.