Our third morning on the train found us stopped at some location I could not identify.

The time was about 8:30am.  Shortly after, I noticed passengers walking outside.

My guess was that this was a train station.

A few freight trains went by while we waited at this location.  An hour and a half later the train moved slowly to another location not too far away where I saw this sign.

The train then started moving forward as if it were going to depart the place and then stopped.  If only they could make up their minds!  It then returned to this station at around 11:00am.

Apparently somebody on the train had had an accident and broken a hip. The person had to be taken off the train.  When the train finally departed Sudbury Junction, it had lost what little time it had made up the previous night. By then it was about ten hours late.

I did join others for breakfast for the first time during this ride.  Met up with a young couple who were from different parts of of Europe, countries in the east and the west.  They were used to traveling all over the world.  The train ride they had enjoyed the most was the one in South Africa.  It turned out that their main complaint with the Canadian was the fact that the timing was predictable.  That was what I heard consistently from other people that we dined with.  Their main issue, and ours, was the inability to create reliable plans for their destinations.  Some had connections to make to other places.

We showered that day on the train (finally!) in preparation for our arrival in Toronto later in the evening.  It was also time to change the dressing on the wounds on my left arm for the first time since we started the trip.  Tom had to do it.  He remembered the procedure but the process itself did not do him any good.  Concentrating on the effort of completing the dressing was too much for him.  He had been feeling good in the morning, but the effort set him back.

Meanwhile, the rescue party from the US were on their way to Buffalo.  They had started the previous day and had run into their own share of adventures.  They had booked a car with a rental agency, only to be told when they arrived there that there was no car really available.  They decided to try their luck at another place, and fortunately a car was just being returned at that time.  They jumped at the offer to rent that car.  The escape plan could have become even more complicated without this car.  Christina and Jesse were also arranging a place for us to stay that night in Buffalo.  Because of the proximity to Niagara Falls, prices for hotel rooms were quite exorbitant, but they managed to find a place that would do.  The only matter now left was to coordinate times of arrival in Toronto, a challenge under the circumstances.

Tom had given up on flying out of Toronto.  There was no way the train was going to get there on time. In addition to the idea of flying out of Buffalo, he was also considering coming down to Gaithersburg with us and flying out of one of the DC airports.  He had been doing a lot of research in this regard on the train.  The Gaithersburg option was less expensive, but he would have to be in good shape to travel in the car.  Both options would get him home in time.  In the end he decided to travel with us all the way to Gaithersburg.

Since the train had originally been scheduled to arrive in Toronto in the morning, lunch that was served in the dining room ended up being an improvised effort.  The chef managed to produce three fresh entrees to choose from. The staff did a great job under the circumstances.  I learned that the train was supposed to head back from Toronto to Vancouver the same evening, and that the staff who had accompanied us on this trip were supposed to work the train going back.  This meant that, because of the delay,  they were not getting a long break in Toronto.  That must be tough.

I took more pictures of the landscape along the way as we approached Toronto.  It was quite cloudy. 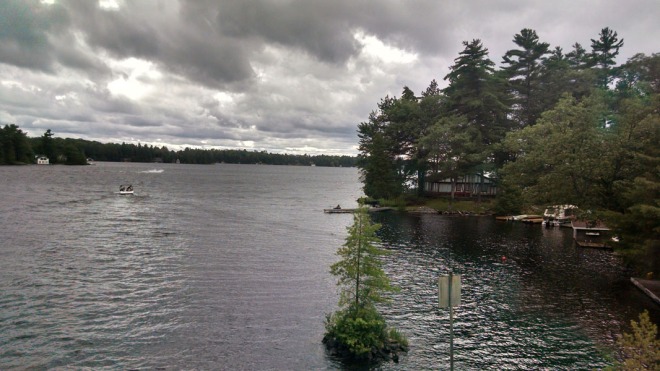 We rolled into Toronto a little after 6pm.  Our rescuers had been trying to get updates on the estimated time of arrival of the train from us and from Via Rail through the day.  Jesse seemed to have left Buffalo at a good time to pick us up and was on his way. We took the nearest exit we could find out of the train station and walked out onto Front Street and got in touch with Christina.  We were instructed to cross the road and wait in front of the Royal York Hotel. 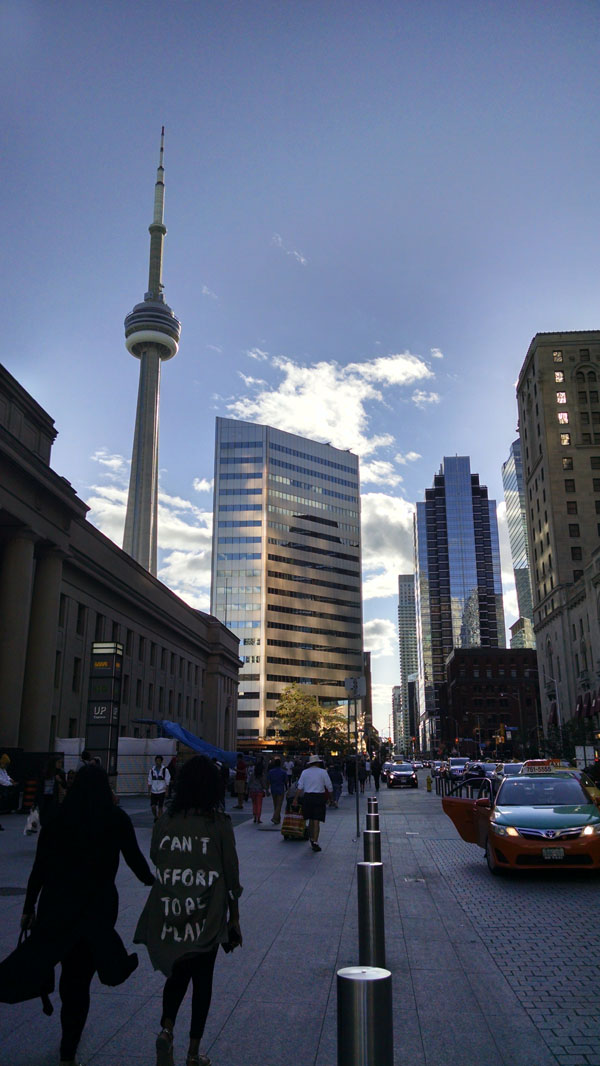 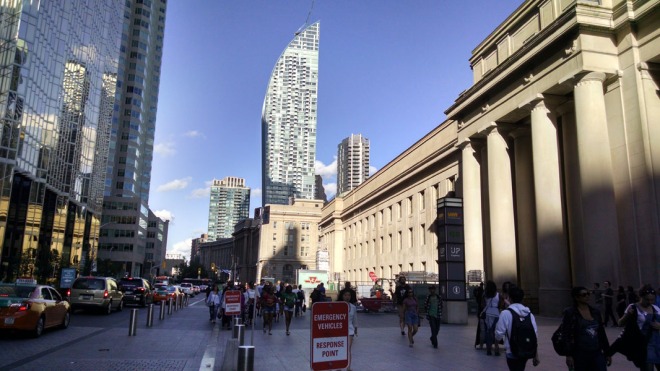 Jesse arrived in the red corolla that we had been advised to look out for a few minutes later.

We quickly packed ourselves into the car.  A message was was broadcast that the package had been picked up successfully!

We made a quick getaway from the city and headed towards Niagara Falls to cross the border into the USA.  We grabbed some food from a Subway along the way.  Tom was already feeling good enough to eat and we both had good appetites.

The immigration officer at the border asked about the purpose of the trip when Jesse handed our passports to him.  “A rescue mission,” Jesse said.  The dressing on my arm was enough to convince him.  The officer asked if I was bringing anything back from Canada.  He then laughed and said that I probably left some skin behind in Canada.  Not only skin, but some flesh also!  I told him that I was only bringing back some gravel from Canada.  He smiled.   For some reason this seemed funny at that time.

Christina was waiting for us at the motel.  We were tired.  We crashed out!

As a postscript to this part of the adventure, I should make it very clear that I would not have made it this far without Tom.   Traveling in my condition was not a easy exercise.  Tom was always there making sure I was OK.  He was the one who did all the planning.  He was the one who had to do the heavy lifting.   He was the one who even had to cut my steak one night at dinner when I foolishly ordered something that had been recommended by others but was difficult to handle.  Thanks for everything man!

Last stage of our travels here.

4 thoughts on “Travels With My Brother – A Delivery in Toronto”