It could be difficult to find conditions that lend themselves to having a feeling of serenity during a somewhat hectic holiday trip, but we did nonetheless experience some such moments during our visit to Ecuador.

We stayed at the Finch Bay Hotel on the island of Santa Cruz while in the Galapagos.  We spent our evenings at the hotel while making many day-trips to different places to take in the sights.  While at the hotel, you could sit out in the open area next to the swimming pool and look out over the bay.  On a clear night, one could see the cruise ships resting in the bay under the peaceful light of the moon.

One was also likely to be greeted by the great blue heron (who seemed to have set up residence in the neighborhood) in the quiet early morning, and one could also join it in greeting the dawn of another new day.

Back on the mainland, on our way from Quito to Otavalo, we stayed in cabins beside the San Pablo lake. The lake was beautiful in the early morning light.  A light mist rose over the quiet waters.

The awakening birds flew low over the waters of the lake as we looked out over it.  It was very peaceful. 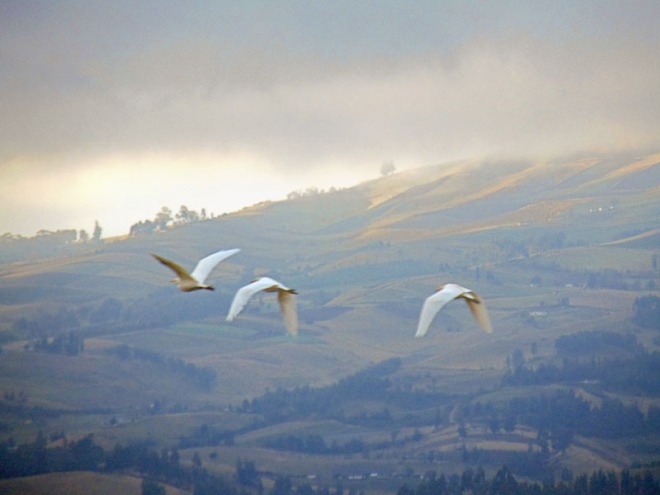 At Papallacta, a little village situated in a mountain valley high in the Andes,  we could see the the lazy clouds floating across the sky in the evening light, past the snow-capped Antisana volcano, as the sun began to set.

In the morning, while we were taking a lazy walk, we saw the cows grazing peacefully on the mountain pastures with not a care in the world.

We traveled further east to the Amazon region of the country.  In the evening light, under the gently rising clouds, we could see the winding Napo river wend its way towards the Amazon, just as it has been doing for thousands of years.  This was the view from our room in the resort where we stayed.

We experienced the sunset on the Napo river.  The river and its surroundings, and even the repetitive phut-phut sound of the engine on the boat, have a calming effect, as we head back to the resort for an evening of relaxation. 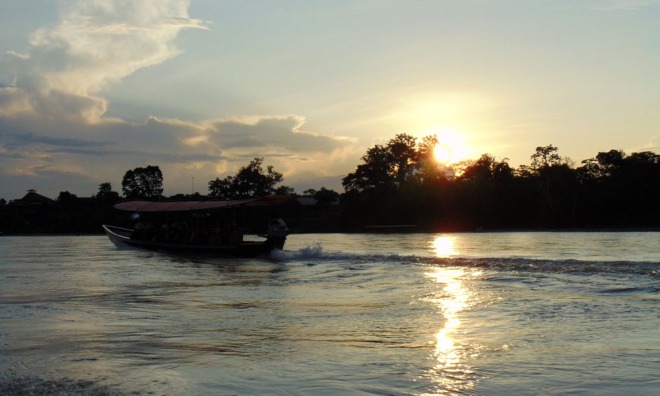 Our hacienda on a mountainside near Patate was also located in very serene surroundings. The view included the Tungurahua volcano in the distance.