Jeff French and I were lifting this ugly piece of furniture over the stairs at the entrance to the apartment building. It was an oddly shaped green table, with a backsplash and long legs, and it was also quite heavy and ungainly to carry. We were going to Apt 13 on the ground floor, but the brilliant designers of the particular apartment building had put in steps to first take you up about half-way to the next floor and then back down again to the level of the apartment. (The thinking process behind such a design is mind-boggling!) So, here we were lugging this monstrosity up the stairs – when the backsplash that I was holding on to (which I should not have been doing in the first place) separated from the table. I lost my grip and the table landed on the steps. Luckily it did not have too far to go. It hit my thigh as I fell back against the steps and sat down. Never mind – not much harm done other than a bruise and some soreness in the thigh.

We then somehow got this thing into the apartment and were greeted by the fellow who lived there. He seemed to be somewhat incoherent. He had bandages on this foot, had some trouble walking, and was apologizing profusely about not being able to help. Jeff thinks that the person was doing this because his pride had been hurt because he could not help, but I think that this dude was still drunk from the previous night (or maybe he also had something that morning). His wife kept telling him to get out of the way, but he kept on getting in the way, until he had to stop because of the pain.

The couple tells us that they want this huge table in their small kitchen. We manage to get it in there, but there is not enough room. When we finally get the table against the wall, we see that there is not enough space to open the door of the fridge completely. (The dude is going to have a hard time getting that beer from the back of the fridge!) There is nothing more to be done about it, and Jeff tells the guy not to call us later to take the table back. We then also deliver a computer table to the folks. We barely manage to get this other rather forgettable piece of furniture into the apartment, this time without it falling apart in our hands. The thing is very heavy because it is made of particle board, but unfortunately it is not very strong. I wonder how long the table will last. Fun times at the furniture program!

I was out in the back yard yesterday afternoon, standing on a ladder trying to take pictures of the beautiful white flowers on the Crape Myrtle tree, 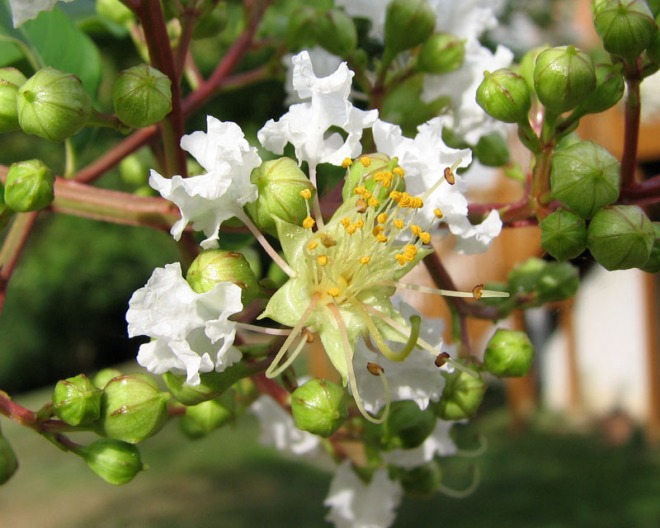 when I noticed the robin standing on the lawn.

I got down from the ladder and tried to walk across to the other side of the bird to take its picture with the right lighting. But the bird did not cooperate. It kept moving in the same direction that I was moving in, parallel to me. Eventually I had to give up. It was when I looked back towards the deck that I noticed a nest under the deck, on top of one of the beams that held the deck up. I could see the tiny beaks of the babies facing upwards in the nest, as if expecting some food to be delivered.

I was convinced that the bird I had encountered had in fact been trying to lead me away from the nest. Anyway, when I came back later the bird was in the nest trying to feed the young.

Another robin was sitting on the neighbor’s fence with stuff in its mouth, but it flew away when it saw the humans. The first robin stayed put in the nest looking at me. It was not about the abandon its young that easily. Another cycle of life begins under the deck.

I have been trying to get some inspiration to write during the past few weeks, but all I see in front of me when I sit down in front of the computer has been a blank page. There are too many cobwebs in the mind, and it is difficult to escape the spider’s clutches. My mind is out of whack. Anyway, I did a run on the C&O Canal towpath from Brunswick to Harpers Ferry this morning in an effort to loosen some of the cobwebs. It was a cool cloudy morning, and it was positively cold on the bridge at Harpers Ferry with the wind blowing between the cliffs.

The waters are low on the Potomac 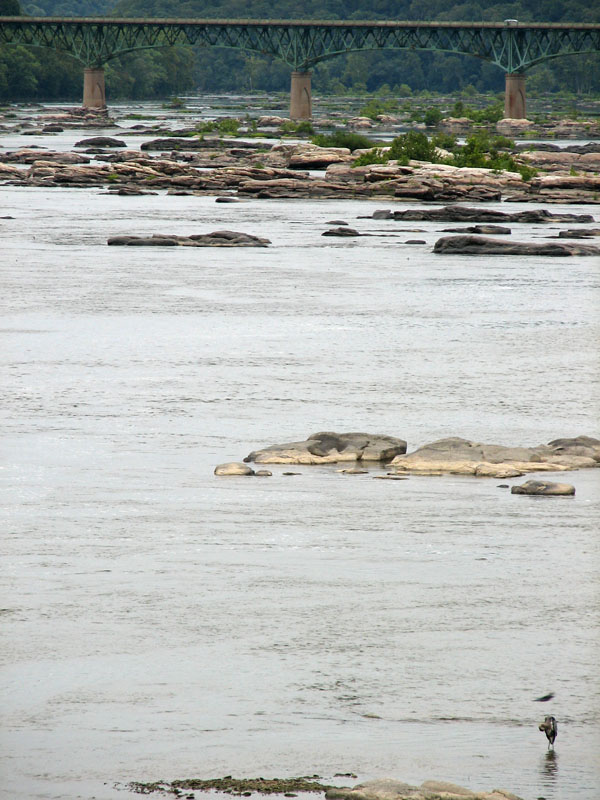 and there were a few intrepid folks who were making their way towards the middle of the river by trying to climb over the exposed rocks.

Much of the murky green water that is a fixture in this section of the canal is gone but not all of it. It is a good breeding ground for skeeters, but none bothered me during this run. (What in tarnation are skeeters, you ask? You will have to find out yourself.) I had company from the freight trains on the other side of the canal, including a monster train led by 5 or 6 diesel locomotives pulling more than 130 cars (yes, I stood there and tried to count them all!). I still feel a rush when one of these trains roars by blowing its horn, shaking the ground, and causing dry branches and other things to drop out of the trees. This is what you call POWER, baby! I managed to even get myself in position to take a picture of a locomotive rushing out of the tunnel at Harpers Ferry.

OK, so I get my kicks out of some very simple and perhaps silly things! What is the harm? I need to get my laughs before the spider gets back….