By sheer coincidence, we happened to visit a few historical locations last week that are associated in one way or the other with the American Civil War.   The practice of observing a Memorial Day in the United States came into being as a formal way to remember the people who had lost their lives in this war.

The first place we visited during our travels last week was Gettysburg, the location of the civil war battle where about 51,000  lives were lost in a single encounter over three days of fighting. The battle marked the turning of the Civil War, when The Union finally began to push back The Confederacy.  It was also the place where Lincoln gave his famous Gettysburg Address.  The first picture below is from a section of the famous Battle of Gettysburg Cyclorama. The cyclorama can be seen at the visitor center in Gettysburg.

The next place we visited was Harper’s Ferry, the location where John Brown, the abolitionist, raided the local armory and helped to ignite a process that eventually led to the civil war.  Being at the confluence of the Shenandoah and Potomac rivers, the town played an important role during the civil war itself.

The last place we visited were the fields of Antietam where the bloodiest single day battle of the civil war was fought. About 23,000 people lost their lives in about 12 hours. 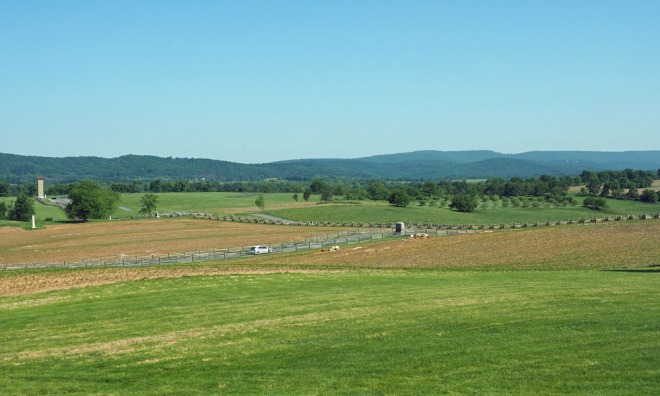 These days Memorial Day serves as the day to remember all the men and women who have given up their lives to serve the country in various wars and battles, but mostly it seems to be a day for people to consider the beginning of the summer season.  Barbecues are fired up for the first time, swimming pools are open, and yes, there are good sales in the stores.

Sadly, we have still not learnt our lessons about wars in general.