I am headed home.  What can I say?  All good things must come to an end, and I got the St. Louis Blues.  But what better way to end the trip than with music and dinner at BB’s Jazz, Blues, and Soup, where we rocked yesterday evening away to a blues set by Big Rich McDonough & Rhythm Renegades.  But I am getting ahead of myself.

When I woke up on Tuesday morning, it was raining heavily outside the 7th floor apartment.  Sheets of water were pouring down from the dark sky in bursts.  Luckily, there is not much planned for the day.  The National Blues Museum is located downstairs in the apartment building and I was going to spend the day there (with an interruption in the middle for a trip to the dentist to look at an ulcer that had formed in the mouth (now healing!) after the surgery).

The lady at the counter told me that I could spend 45 minutes to an hour there, but I ended up spending a few hours trying to soak in all the details, very little of which I can remember a few days later.  It is interesting to recognize and understand how this music of the downtrodden black people not that far back in time became the foundation of the present music form over the years.  And the music is still relevant today.

Angela was going back to work on Wednesday and so I accompanied her to the free Boeing museum (which is called Prologue) located at her work place. 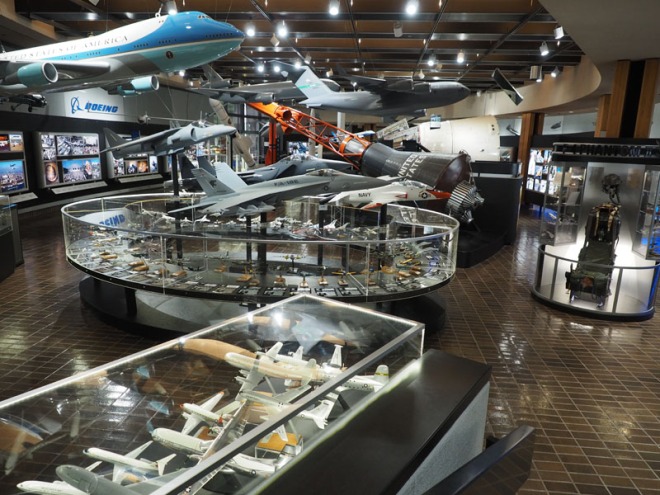 I am addicted to technology related to flying, and, once again, I spent more time in a museum than predicted by other people, immersed in the information.  When I was young I used to look for and read anything I could find about flying.  (I even found a way to get to the local airport to see the Boeing 747 when it came into town for the first time.  I would also have studied aeronautics had it not been considered a less desirable engineering pursuit at that time.)  The details of what I read and learnt as a youth get lost in the backrooms of my memory over time, and today was the time to try to remember stuff – about commercial and military aircraft history and development over the years,  about space travel, about other “stuff” related to moving through the air through unnatural means.  They had great information for the curious.  They even had full size capsules from the Mercury and Gemini programs (that helped launch man into space). These were set up in the then McDonnell (now Boeing) facilities for training and testing purposes.  These were fully functional even though they did not go into space.

I found it easier to follow the developments in commercial flight than those in the military realm.  People will spend more money and effort to experiment in the military realm so that there ends up being much more variety in the end-products that result.  Nothing much has changed in this regard over the years.

Since I had more time to kill that day (since Angela had a few more hours to work),  I drove to St. Charles, a little town on the other side of the Missouri river.  Lewis and Clark spent some time here in the past on their way west.

These days, the main street has been developed for the tourists.  It seemed lively at lunch on a week day.

There is an Art Center at the end of town which supports local artists.

The art center is set in a location where there is also a big factory that runs along the river called the American Car and Foundry Company . The company is still operational, but the sections that one can see from the trail that runs along its side look run down and abandoned.

And then there is the Katy trail that runs past St. Charles closer to the river.

I found out that the Katy trail considers itself the longest rail-trail in the country.

The name comes from MKT, the initials of the Missouri Kansas Texas Railroad, whose right-of-way has been transformed into a comfortable biking trail of crushed limestone.

Biking this trail may be something to consider in the future, but days like the one I spent in St. Charles would be too hot for an endeavor like this.  A plus for the trail is that it seems to include support services and B&B’s for overnight stays along the way.

And then it was time for the entertainment.  We ended up going to an establishment that all of us in the family (except for Angela) had gone to on a previous trip through the city. It was the only place having live entertainment that day at a reasonable time. It was within walking distance, and we convinced ourselves that it would be a safe walk from our apartment later in the evening even though it was located a short distance from downtown in an open area that was full of empty parking lots. 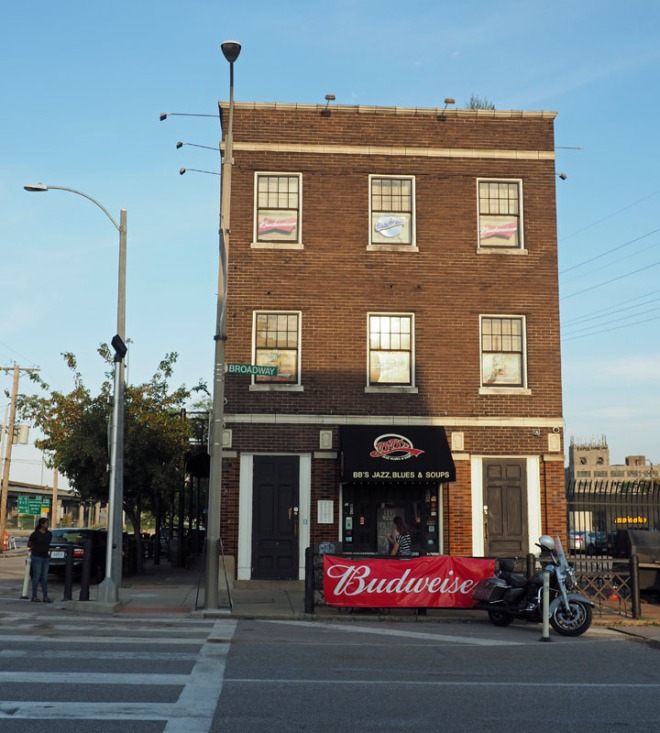 We had a great time.  Both the food and the music were great.

The band mostly seemed to be a bunch of local artists who had come together to play that evening.  The drummer was a college kid – could not figure out if he was a graduate or undergraduate student.  What a thrill for a young man to be able to play music for the public in this environment with people who are so skilled in the art!  Much of live jazz and blues is improvisation, with the band following its leader as he plays what he is feeling at that moment.   It looked and sounded like the band was having fun.  It was Angela’s first visit to a blues bar, and I hope it will not be here last.

And then it is time to head home today.  All good things must come to an end. I got the St. Louis blues…