Strictly speaking there is no rhythm generated by the turning of a wheel – by something that is circular that simply goes round and round.  But a rhythm can indeed be established by some process related to the turning of the wheel.  Thus it is with riding a bicycle, where the wheels contribute to rhythms that are established in other ways – whether it is from the sounds of some intermittent but regular contact between the wheel and something on the bike itself,  or because of something getting stuck in the treads of wheel itself making contact with the ground; or whether the rhythm is in the movement of the legs, the movement that causes the wheels to rotate.  Some of these rhythms can become addictive, like a drug, and the feeling that takes over can overcome all other feelings, especially when you are in the groove.  The rhythm overcomes any feeling of tiredness that may exist, and can indeed make what you are doing at that moment feel somewhat effortless.  Perhaps biking is addictive, and what one is experiencing is a high – when one feels the rhythm of the wheels.

You might be able to sense from what I wrote that I am back to a regular biking routine.  Consider that I had only started biking once again recently just to get some practice for the long rides that I have done with friends the last couple of years.  Now that I have started biking again, I have the urge to go on and on.  Yes, the feeling of a need to bike may also be a sign of an oncoming addiction.

Last week I decided to try out something a little more challenging.  I rode the towpath from Great Falls to Fletchers cove,

and took on the slope of the Capital Crescent Trail from Fletchers Cove to Bethesda from then onwards.  The ride on the CCT was a breeze!   I feel like I have not lost the strength and ability to tackle the slopes.  My only adventures that day were on the towpath. The first time was when I was forced off the path into some shrubbery that proved to be quite irritating to the skin (wonder if it was poison ivy). This was because of the approach of a group of heavy-duty work vehicles on the narrow path.  They were probably trying to get to a place to do some repair work on the trail.  Thankfully the itching feeling did not last.  (Perhaps I was experiencing the effect of the rhythm!)  I encountered the same convoy on the trail at an unexpected location on the way back.  It looked to me like a skid-steer loader had gotten partially off the trail and was being pulled back on to it by a heavy-duty excavator. I had to carry my bike off the trail and through the trees to a spot  well below the towpath that was closer to the river, and then take an unmarked detour in order to get by! 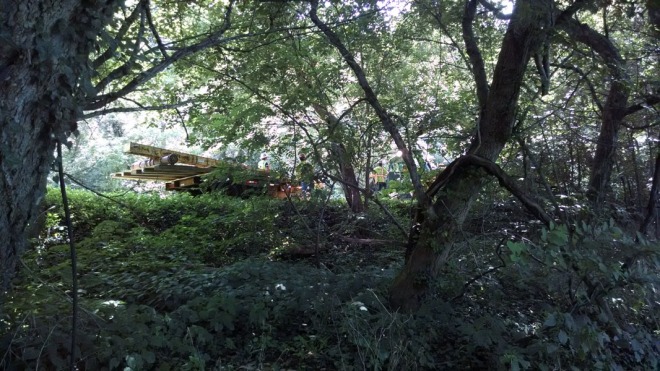 The next time I biked that week, I stuck to the towpath and went all the way up to Whites Ferry from Pennyfield Lock.  The ride was uneventful, except for the fact that I got so irritated by the state of the trail in one section (something that I have complained about in the past) that I even wrote a letter of complaint to the National Park Service.  The letter has probably been ignored, but at least I was able to get it off my chest.

Teresa came biking with me last Monday.  She was doing this for the first time in years. She did feel the aftereffects!

The last bike ride to report on was from Whites Ferry heading north.  I was hoping to get to Brunswick, but I had forgotten about the washout of the trail just south of the town.  This happened because of all the rain we have been getting recently.  This one is going to take a while to fix.

Meanwhile I intend to continue to ride.  It may be an addiction!

The beat goes on…

One thought on “The Rhythm of the Wheels”