I felt that I had to bike today because I had not gotten out for my regular exercise in over a week.  The temperatures had been in the “dangerous” range, and it was dropping to more comfortable levels today.  I left home very early, and was surprised by the large number of cars in the parking lot at Pennyfield Lock at that time on a weekday.  The sun was still rising as I set out.  I saw a large number of bicyclists at the lock house for Pennyfield Lock as I approached the towpath.  It was obvious that they had spent the night there as a part of the Canal Quarters program.  I then turned on to the towpath headed for Washington, DC.

The level of water in the river is low right now.  It has not rained for a few days.  Work at different sections of the canal where there were detours – the waste weirs near Great Falls, and mileposts 7 and 9, are being rebuilt – was already underway for the day.  I even had to navigate my way around a truck bringing in material to a construction site.  I can see that the work at the different sites is coming along.  I believe there is a long term plan to re-water the entire stretch of canal starting at Violette’s lock.  The current work could be a part of that long term effort.  Wonder if I will survive long enough to see the end result!

Pretty soon after I got on the trail I realized that I had not taken my camera.  I had been thinking primarily about the exercise aspect of the ride and had forgotten.  But it did not bother me.  However, a few miles into the ride, my thoughts drifted towards the thinking process behind taking pictures.  (It was that kind of a morning!) To me, it is not necessarily just about taking a picture that looks good, but it is more about capturing a story.  Sometimes, a single picture can tell a story.  But, these days, I also like to add pictures to a story that is being told with words to give it more character.  This is something that did not do in the past.  In spite of the fact that I did not have my camera with me, I did get to a point during this ride when I felt the need to stop and take a picture with my smartphone to somehow capture how it felt at that time during the ride.  That would be the story.  The first time I had this feeling I did not stop because I was focused on the exercise aspect of the ride.  But a few hundred feet later, I came to another point where I could not resist the temptation to take a picture.  Here it is. 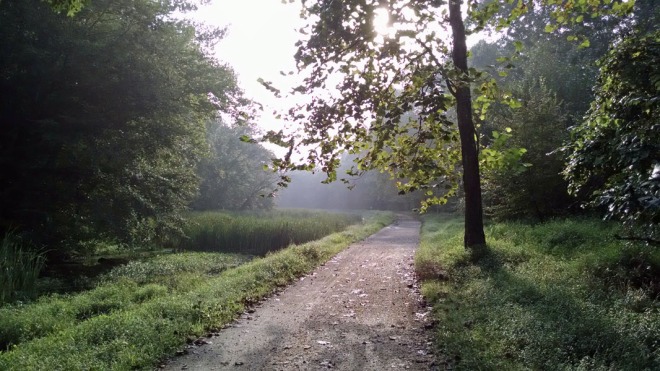 When I reached Fletcher’s Cove, I got on to the Capital Crescent Trail headed in the direction of Washington, DC.  The ride on this trail is smoother than on the towpath since it is paved. As I approached DC, I began to feel a rhythm of the wheel that was unusual.   There was a bouncy feeling, and very little noise associated with it.  When I got to the end of the ride at the far end of the Georgetown Waterfront, I decided to check out the tire and realized that there was a bump in one small section. Oh, oh!  It looked like the tire was about to blow out, and I was about 20 miles from home.  I had been barreling down the towpath over pieces of gravel on my way out  (remember, this particular ride was about the exercise, and not necessarily sightseeing – each ride has a different feel to it!).  I had to either find a local bike shop to replace the tire, or bike more carefully on my way back.  I decided to risk it and bike back, but only after releasing some air from the tire to reduce the pressure.  I did manage to make it back to Pennyfield lock in good shape and in good time.

I found a few pawpaw fruit on the ground during this ride.  Perhaps it is time to return to the section of the trail that had an abundance of these fruits last year.

The rhythm of life goes on.

2 thoughts on “Of Photographs and Stories”