It was raining heavily when we woke up.  I had been thinking about going back to Arches National Park to see the famous Delicate Arch before we departed the area.  That plan was cancelled.  There was no way to hike the trail to get to the rock under those conditions.  The rocks would be slick.  We decided to take it easy today.  We would starting heading south towards Monticello, UT, our destination for the night, and stop at the Needles district of Canyonlands National Park along the way.  (The area we had gone to the previous day was called Island In The Sky.  The two sections are not connected within the park itself.)  Moab and Monticello are less than 60 miles apart, but the side road to the National Park was a long detour.

We got back on US 191 after replenishing our grocery supplies and filling up the car’s gas tank.  (Interesting note – the regular gas has an octane level of 85 in these parts, whereas the minimum octane level that I have encountered anywhere else so far has been 87.  I have to find out why that is the case!)  It rained almost all the way.   At the turn-off for the park we noticed that there were others traveling our way on the narrow road in spite of the weather.  Interestingly, we had to ford a section of the road that had water swiftly flowing across it. This was a flash flood condition.  The water was brown and looked deep.  Our SUV vehicle had no issue crossing.

We had been driving in open areas all along.  As some point the road began to wind its way downward towards the bottom of the canyon.  As we rounded a corner in the road (with an overhang of massive rock that I thought would take the top off the RV that was following us), we saw trees once again.  It caught us by surprise. 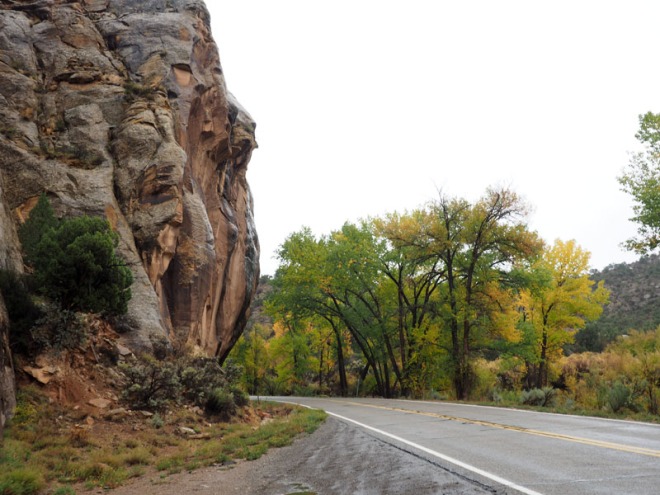 We made a stop at this point to go to the Newspaper Rock State Historic Monument.

This following picture was taken as we were wandering around near the rock with the petroglyph.

It was still cloudy when we reached the visitor center, but there were signs that the sky might be starting to clear up.  There were very few people around.  It seem like that number of people that we have been encountering in the local parks has been going down each day.  That is probably because of the location of the parks and their popularity in the general public. 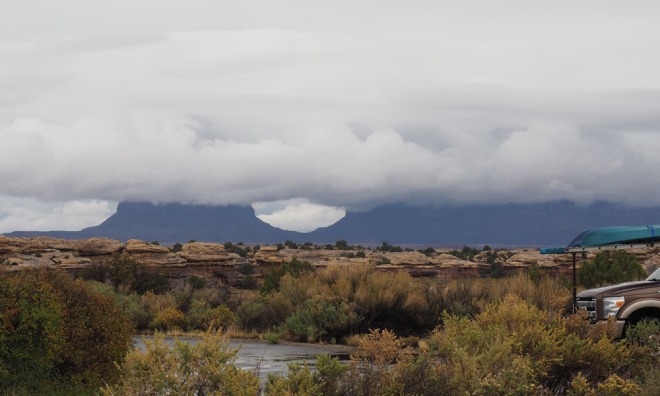 On our way further into the park we stopped at the Wooden Shoe Arch Overlook. 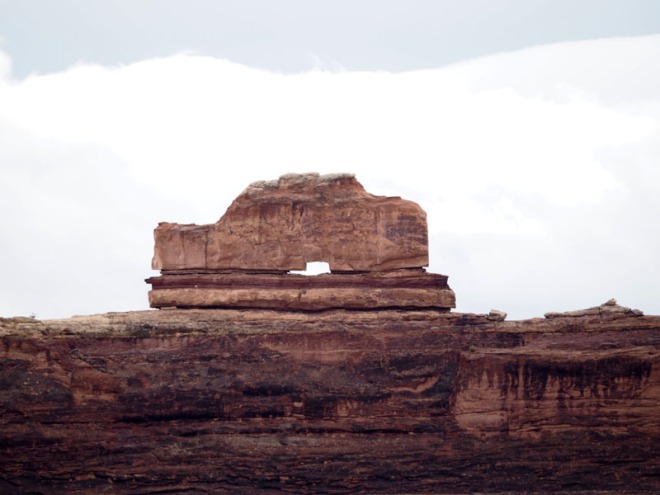 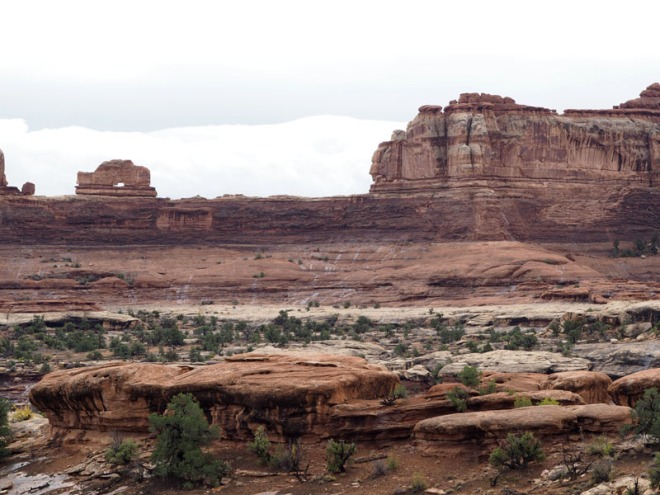 Our first real stop was for a hike on the Pothole trail to try to see the “Needles”.  Because of the rain the natural potholes had water in them.  You had to be careful to stay on the trail over the rock that was marked with cairns.  The rest of the area was muddy and you feet could sink into the soaked red mud.  Here are pictures from that hike.  We probably walked less than a mile. 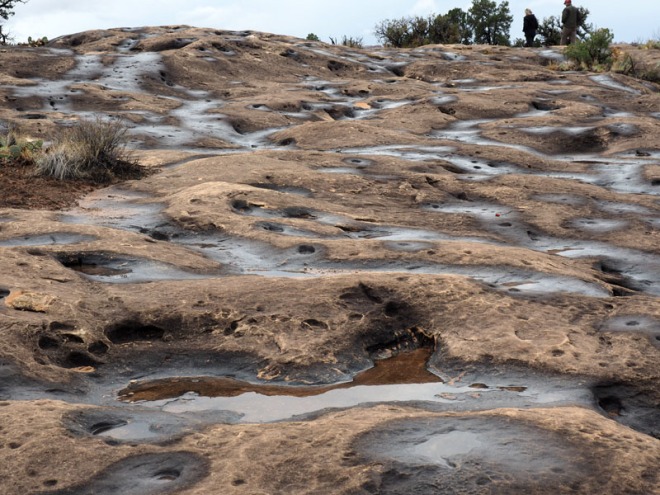 These are the needles. 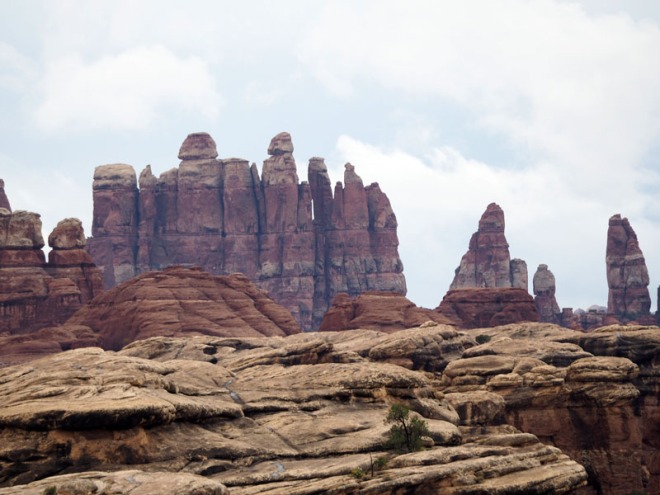 It was like walking in a fairy tale wonderland.

We then drove to the trail head for the Slickrock trail.

The skies began to clear up as we walked this loop trail.  We covered about 3 miles on a flat rocky surface that offered panoramic views in all directions.  By the time we got to the later half of the walk we were feeling the effects of the hot sun and were regretting not having taken our hats with us. 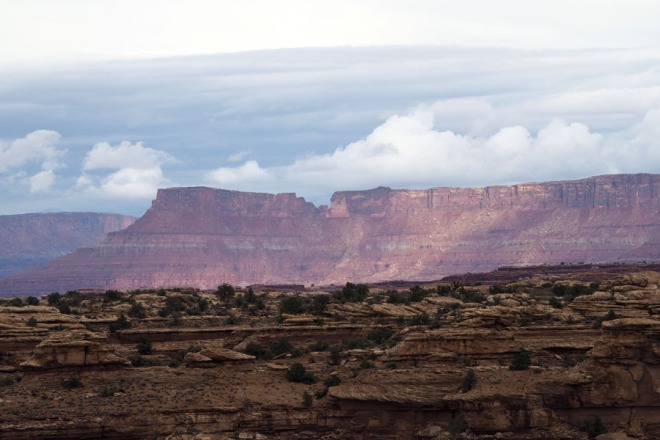 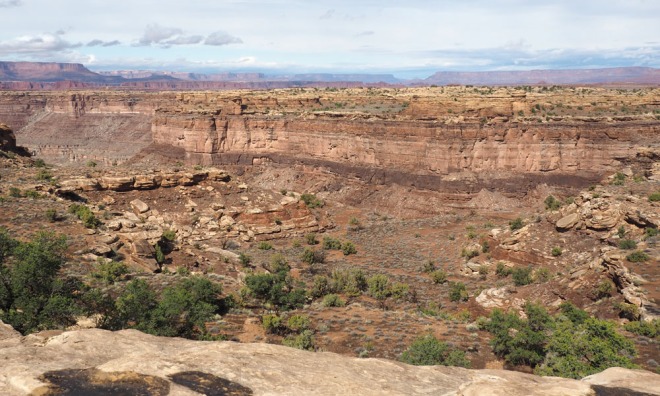 Big Spring Canyon Overlook was at the end of the park road, less than 100 feet from the trail head for Slickrock trail.  There was a stream flowing over a waterfall at the bottom of the canyon.

I walked halfway down to the stream by myself.

On the way back out of the park we stopped at some roadside ruins.  It was a short walk to a location where there was a granary that Native Americans had built for storing their food.  It seems that these kinds of structures were deliberately built in hard-to-reach locations. 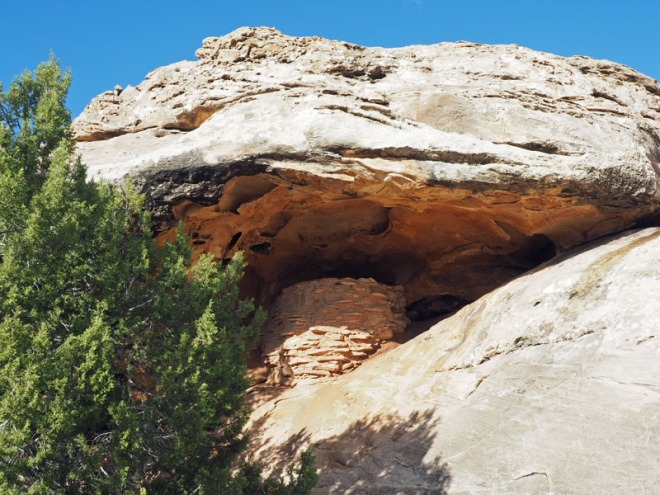 On the way out of the park we stopped at the visitor center once again to fill up the water bottles.  The drive out of the park was spectacular as the evening sun was falling on the red stone formations that towered into the sky just beside us. We had to stop in different places to catch our breath and take pictures, pictures that cannot capture the majesty of the scene around us.  This land has a grandeur about it that words cannot describe, and we should be grateful for the opportunity offered to us to experience its natural beauty.

This was what was left of the water that we had experienced flowing across the road that morning.

We arrived at Monticello around 6 pm and headed straight for the Blue Horsehead Inn that we were staying at that evening.  It was an old roadside building that reminded you of motels in times gone by.  It turned out that our room was also in the same fashion, with the bathroom fittings seemingly from the last century. I thought it was a cute and functional setup, but I am sure some others might have different opinions and be concerned about staying in places like this that are somewhat offbeat and not up to their standards.

I had booked the place to stay in Monticello rather than staying another night in Moab because the prices for rooms were less than half what they were in Moab.  You can see why that is the case when you drive into town.  It is a tiny place and I think it might have a single traffic light (I will confirm today!).  The place is sparsely populated.  I saw a few older motels as we were driving in.  The houses are small, and there are signs of decay, including the closed up diner on main street that is for sale.  I am hoping to head outside to take some pictures this morning.

There are only a few restaurants around and after we got our stuff out of the car we chose to walk to Doug’s Steak and Barbecue down the street.  It was a small unassuming place set back from the main road, and behind a camper, but the food was awesome. We had some out-of-this-world pulled pork, freshly made I am sure, that we washed down with beer.  We enjoyed this simple and inexpensive meal thoroughly.  Great stuff!  We were glad to walk off the effect of the meal as we headed back to our motel.

We head out to Mesa Verde National Park in Colorado this morning.  I have to say that all our park experiences so far have been unique in their way, and I believe this will also be the case today.  I am not sure if I will be able to post a blog for today in a timely fashion because we are staying the night on Navajo land in Monument Valley, and I am told that their is no Internet connection in the rooms.