The visit to Zion National Park today was one of the great experiences that I hope to never forget.   It was an amazing day!

We have a general tendency to avoid the obviously touristy places and their crowds, but Zion was the place that showed me that it is possible to have a great experience even when the place is packed with tourists.  In this case, the park has set itself up to serve the tourists in a very effective way, dealing with the bottlenecks of crowds arriving in large numbers at peak times, and also having most of these tourists passing through a couple of points of entry and through a single visitor center.  There is a shuttle bus service which ensures that you do not have to rush through the park in your car causing unnecessary pollution and also frustration in finding places to park during the day.  Furthermore, the type of people who come to these places tend to be outdoorsy types, respectful of the space that they are in, and respectful of other people who are visiting.   They all also seemed to be well prepared for their outdoor activities with what they were wearing and what they were carrying. Once people get dispersed to the various spaces in the park and take to the longer and more challenging trails the crowds dissipate, and except for the popular trails, all is good.  The system seems to work in spite of the volumes of traffic.

The day started out with very cold temperatures.  We had packed warmly for the outing.  We need not have been concerned about the weather.  Once we got to the park and got moving everything turned out well.

We headed north out of town on US 89. We reached Zion taking Utah Highway9 from US 89.  At the entrance to the park the color of the road surface actually changed to a shade of brown. I do not remember seeing such a surface anywhere else.  The speed limit dropped as the road began to wind through the hills.  We began to see the mountains on the east side of the park. 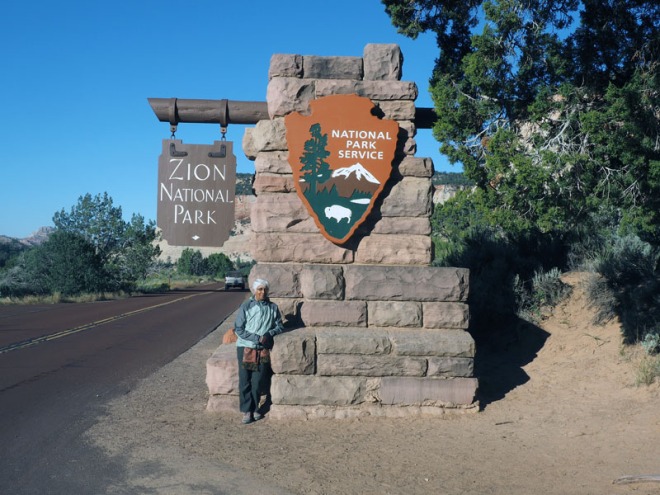 We reached the 1.1 mile Mt. Carmel tunnel that takes you across the mountain to the western side of the park.  The tunnel was completed in 1930 and provided a way through the mountains in this section of the mountains for the first time.  The tunnel is quite narrow.  They were running one-way traffic when we arrived, probably because a bus and an RV were trying to get through.  They would take up both lanes.

In the picture below you can see one of the holes that was blasted in the side of the  mountain to provide a view point from the tunnel. 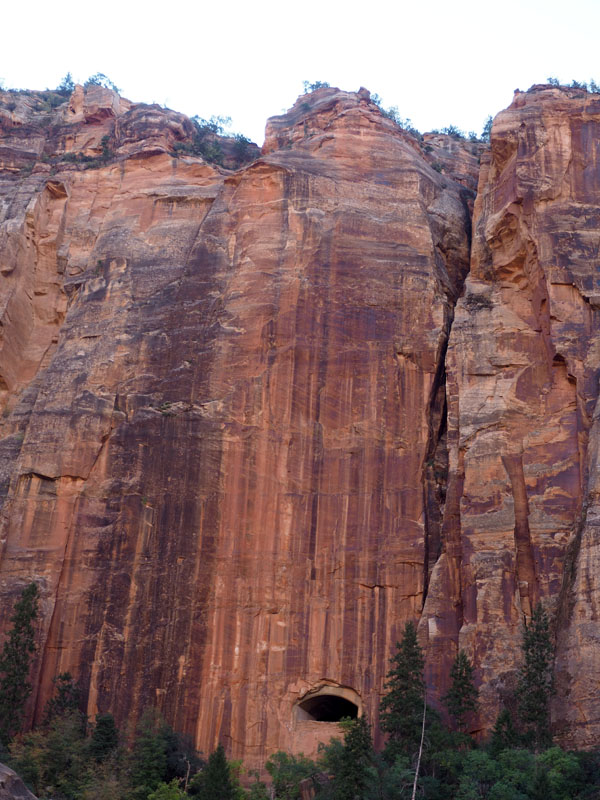 As soon as the road crosses the tunnel, it switchbacks it way to the bottom of the canyon in a very dramatic way.  You can pull over to the side of the road in many places and you can get views like this.  These colorful mountains tower over the narrow canyon.  It is awe inspiring.

We went to the Visitor Center to get ourselves oriented and figure out where we were going.  We decided to take the shuttle bus to its last stop, The temple of Sinawava, to take the Riverside Walk.  You get a lot of information on the bus during this 40 minute ride, and you can enjoy fabulous views from the bottom of the canyon, including this picture of the mountains called the Patriarchs, including the three peaks, Jacob, Abraham, and Issac.

You also pass the a peak that is probably called Angels Landing.  It is the terminal point for the Angels Landing trail, a climb of 1488 feet over really challenging terrain that is not for the weak of heart.  A one point you will be climbing and walking on open rock high over this open space, completely exposed, with only a metal chain railing to grab on to.  Other younger people in the family have done this trail in the past. 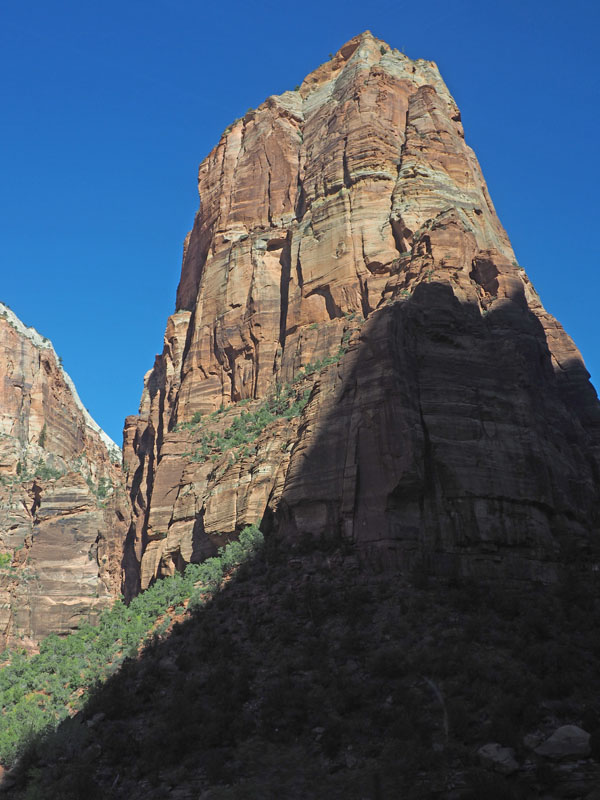 Zion’s canyon was formed by the Virgin river that flows along its bottom.  Over millions of years the river has cut its way down through many layers of rock.  The place can become dangerous when the river floods.  The river was calm during our visit.  The riverside walk was very crowded, but there was always the opportunity to go off the trail and find a calm space beside the river itself. 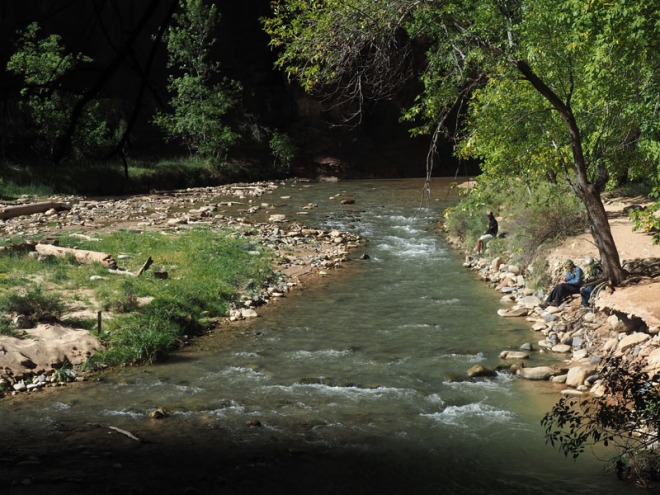 At the end point of the trail, one can proceed further into the canyon by walking in the river itself.  You can go for miles, and many young people had come prepared to do this.  It sounded like fun, but not something we could indulge in today.

We had something to eat as we sat by the river side.

After this hike we took the bus to the stop for the hike to Weeping rock.

The hike to Weeping Rock was short but it was quite challenging in parts.  At the end of the hike you find yourself in a rock alcove with dripping springs.

The next hike started at the same place.  We climbed up the mountain you see in the picture below on the East Rim Trail to Echo Slot Canyon.  We had to climb up to the trees that you see in the picture below.  Basically, one is going up the face of the mountain that you are looking at using extended switchbacks.  You have a view of the valley below as you are climbing.  This proved to be a very challenging effort but quite rewarding. We took it slow and easy, with plenty of stops.  Lots of young people passed us on the way up, but speed was not the goal here.

This is a view of the valley as we started the climb. 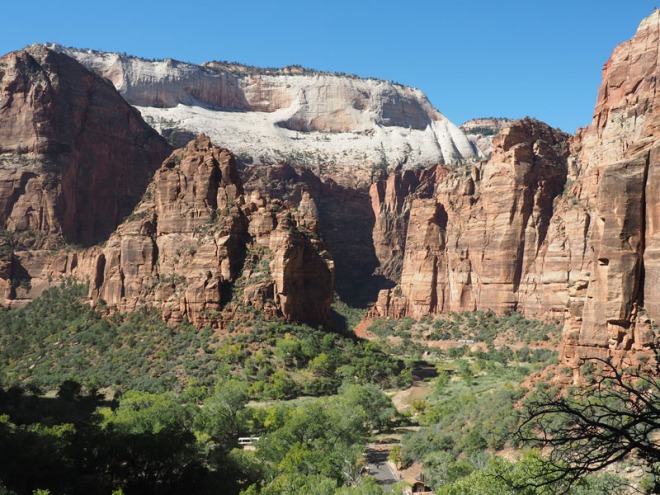 This is a picture of Weeping rock, the place we had gone to earlier, as we climbed the East Rim Trail.

This is a view of the valley when we finally reached the top of this section of the trail. 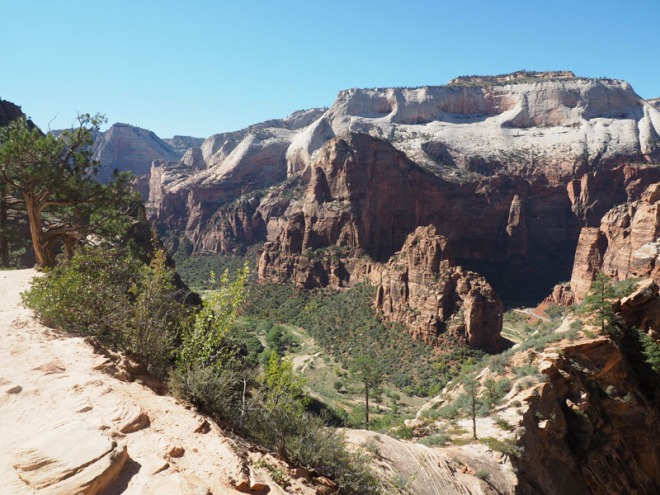 The trail then continued on the other side, behind the open face of the mountain, in an opening between two cliffs.

You could see the slot canyon below you in places.  They looked difficult to navigate, but it apparently can be done. 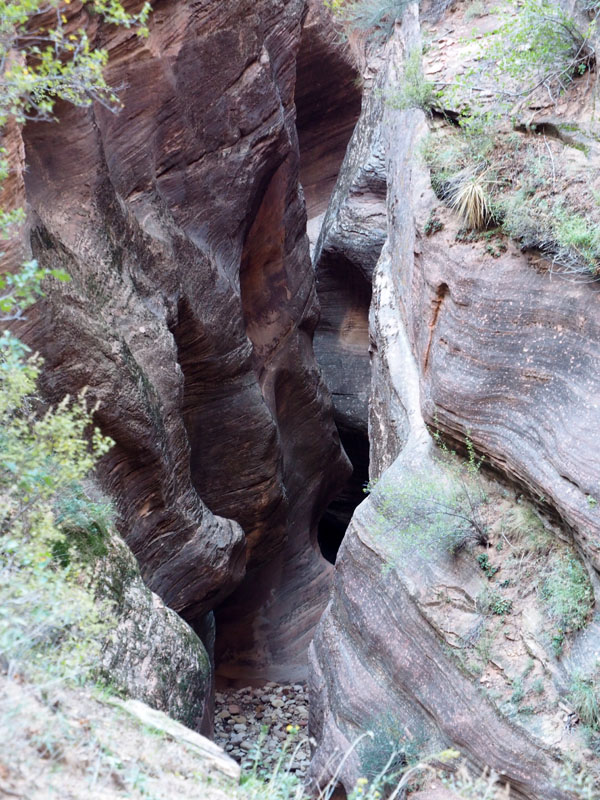 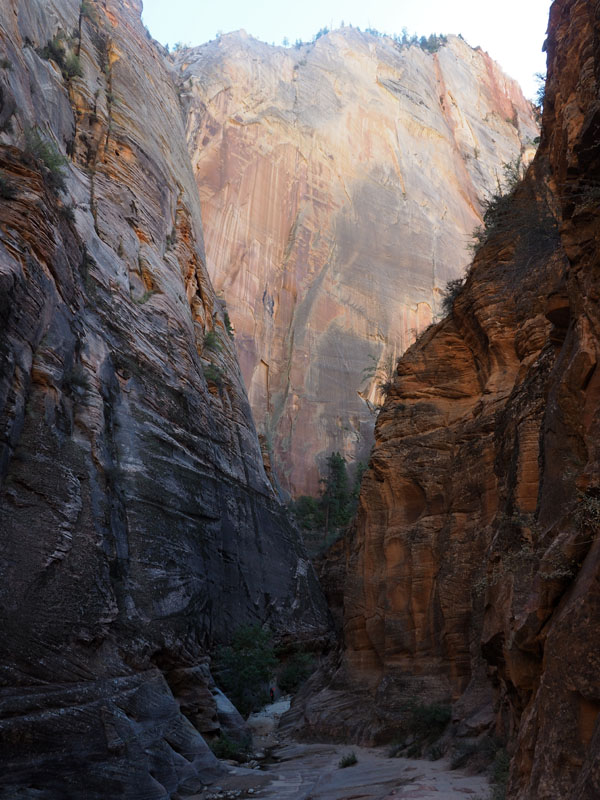 After passing through the gap in the mountains, you arrive at an open space on the other side.  We declared success at this point and turned to head back to the trail head. 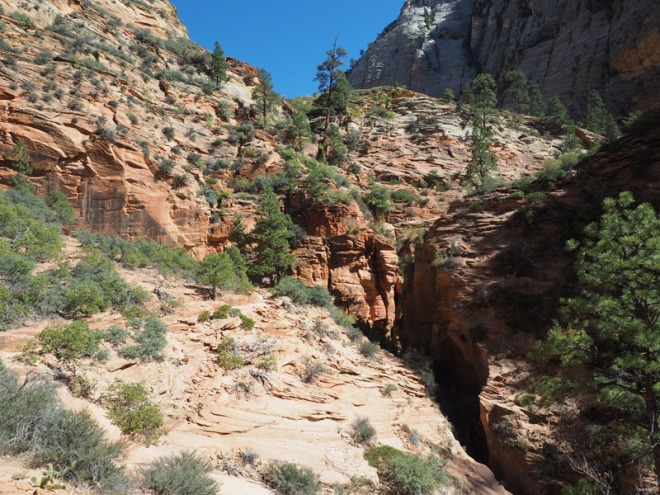 My GPS device was having all kinds of issues during this climb, either because of the terrain, or because of a bad software download.  So I do not know how much ground we covered.  The hike took a couple of hours. We probably walked only about three miles in all, but we might have climbed about a thousand feet.

We were exhausted after this hike, but it was quite exhilarating to have done it.  The rest of our stay in the park was just icing on the cake.

The next walk was on the Lower Emerald Pool Trail.  It was somewhat unremarkable.  The trail was crowded.

We took the shuttle bus back to the museum to watch the movie about the park, and then walked back to the Visitor Center on the Pa’rus trail that ran along the canyon floor close to the river.  These pictures are from the walk.  We walked amidst the mountains.

There are plenty of camping sites at Zion National Park, and it looked like all of them were occupied. 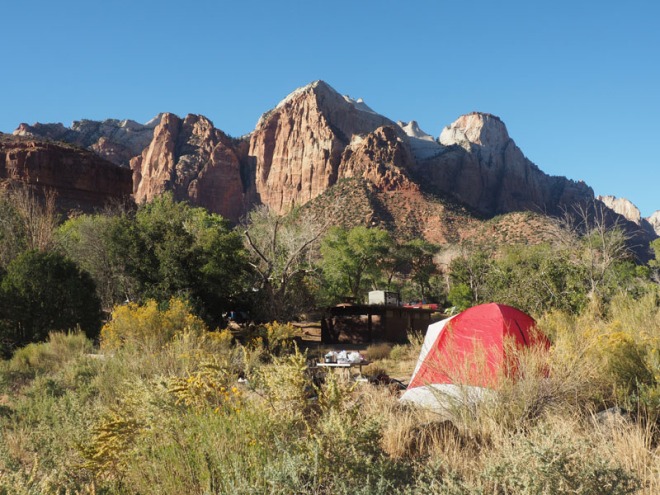 The last stop was at the gift store to get a replacement light jacket for the one that I had left behind at the security check at Dulles Airport on the way in.

Then it was time to head back to Kanab for the night.  It took a long time to get out of the park because we were stuck in a long line of cars, slowed down because of a couple of drivers who did not seem to have the good sense to pull over when they got a chance to let the others through.

We walked over to Luo’s Cafe, close to the hotel that we were staying at, for our first dinner of Chinese food during this trip.  It all went down quickly because we were very hungry.  Back at the hotel, we took our baths and crashed out.  I, of course, spent some time processing some pictures for this blog.

We are heading north to Bryce National Park today.  It is going to be colder today than yesterday!