Disaster struck a couple of days before I was to leave India to return to the USA.  There was an ambush of the military in the state of Kashmir that resulted in the death of a large number of Indian soldiers.  These kinds of events happen every once in a while due ongoing conflict in the state. These incidents are serious enough to create an international crisis, with two nuclear armed forces facing each other, eyeball to eyeball, across a disputed border.  Wars have been fought between India and Pakistan in the past because of this situation, and border incidents happen with frightening regularity.

My flight back from Delhi to Washington DC was happening a couple of days after the incident in Kashmir, and the flight path was about to closely follow the great circle route, the path that had taken me close to the North Pole on the way in to India.  This path took the aircraft, an Air India Boeing 777-300ER jetliner, over Pakistan, the “enemy” in this case.   I was not sure what was going to happen to my flight back home.  Fortunately, things went as planned.  The flight took the expected path in spite of the tension between the countries.

The retaliation for the ambush of the military in Kashmir finally happened just a few days ago.  This time, in response to the retaliation, the government of Pakistan appears to have shut down its airspace to all commercial traffic (not just that from India).  I wondered what would happen to the flights between Washington DC and Delhi.  I checked out Flightaware.  This is what I saw regarding the flight that took off from IAD to DEL on Wednesday (2/27/2019). 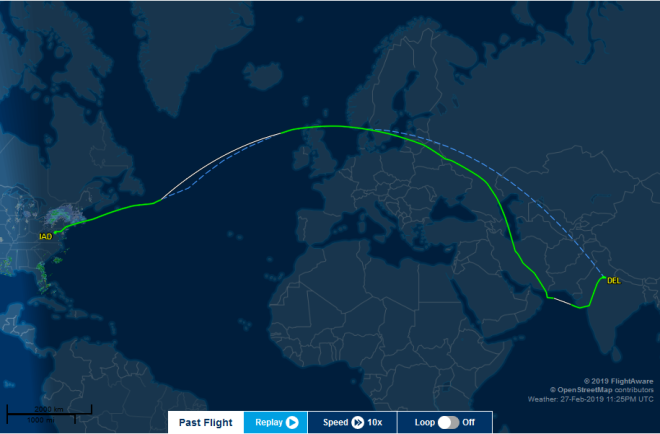 The flight actually took a longer route than was normal, adding about a couple of hours to what was already a long flight, and it did not fly the great circle route, the route that would had taken the least time.   As is obvious from the last section of this flight, this route was taken to avoid flying over Pakistan.

On the other hand, the inbound flight from DEL to IAD, one that had been flown by the same aircraft just prior to this, had followed the expected route. 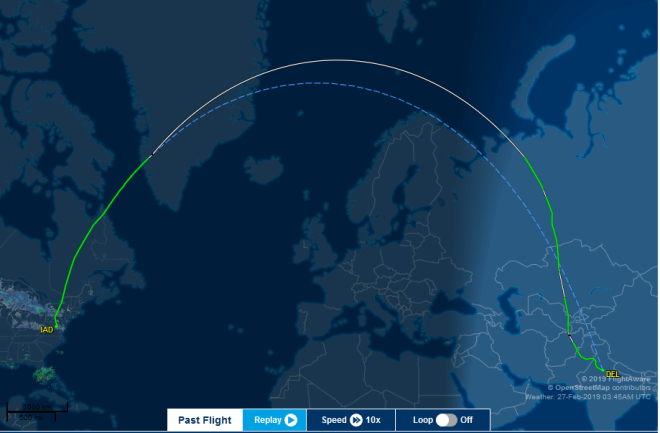 The situation had changed between the flight heading out of Delhi to Washington DC and its return back to Delhi.

Conflicts have all kinds of consequences, and this was one of them.  It could not have been nice for the people on the flight.  Peace, y’all!