There are a few challenges involved in making a visit to Machu Picchu.  The primary issue is access.  And then there are the crowds that you have to deal with once you are there.  The uncertainty of the weather is also factor.  It rains a lot in Machu Picchu.

The only way for tourists to get to Machu Picchu is to first take the train to Aguas Calientes (also called Machupicchu Peublo), and then take the bus operated by the authorities up the mountain to the ruins of Macchu Picchu itself.  You cannot drive to Machu Picchu, but you can hike the Inca Trail to the place if you have a few days to spare – and the determination, stamina, and physical fitness, to undertake the challenging walk.

We had to get to Machu Picchu early to try to avoid the crowds.  Our train was to leave Ollanthaytambo at 6:40am.  We were up early,  to have breakfast at 4:30am, to prepare our bags to be picked up for checkout by 5:00am, and then checkout and depart from the hotel in Urubamba at 5:30am by bus.  Early morning departures tend to play havoc with the internals of the human system, especially as you get older.  There was a mad rush for the restrooms in the station at Ollantaytambo once we got there, before we boarded the train. 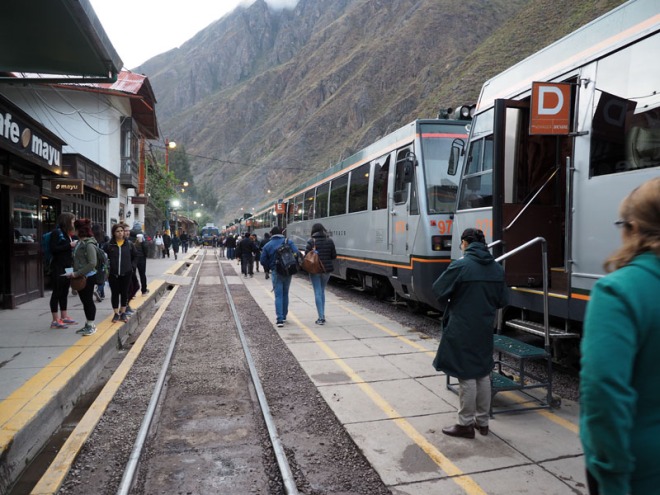 A short while after the departure of our train from Ollantaytambo, the valley that it was traveling in began to narrow, and we entered a canyon with Urubamba river flowing next to the train tracks.  We were getting into the park area.

The train ride was very comfortable and there were some nice views.  It was difficult to take pictures of the scenery through the window.  We were in the woods and among the trees.  In a short while we were offered some complementary snacks and drinks.  We were traveling on the Inca Rail. (The other train operator to Machu Picchu is Peru Rail.)

Our tour manager was determined to get our group to our destination quickly, before the crowds.  Based on his experience from trips past, he knew that most people were delayed because they had to stop at the restrooms in Aguas Calientes before boarding the bus.  He devised a strategy that required all of us to use the restrooms on the train before we got to our destination.  He was going to signal to the group when we should starting lining up in front of the restroom on the train in order to use it.  And that was what we did!  It was somewhat amusing to see folks queued up in the narrow corridor, blocking the way, concerned that this might be the last pit stop for a while.  The other passengers in our carriage who were not part of our group must have been wondering what was going on.

The train stopped along the way at a station for the start of the famous Inca Trail hike to Machu Picchu.  It is called the Camino Inka-Inka trail.  It covers 26 miles and takes 4 days to complete.  It starts at KM 82 of the train tracks. 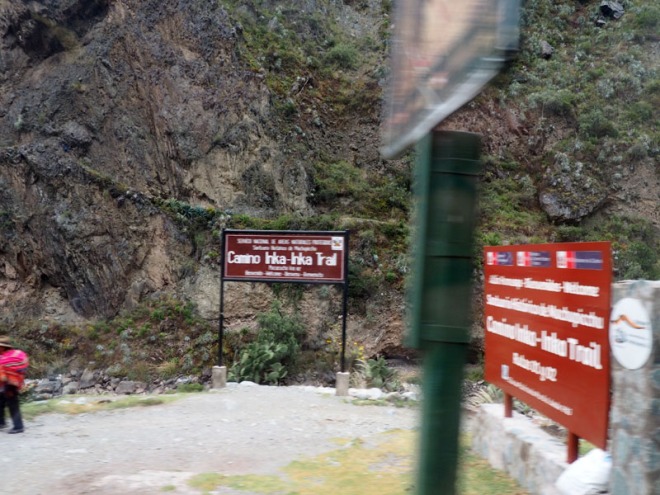 You have to cross the river from the train stop to start your trek. 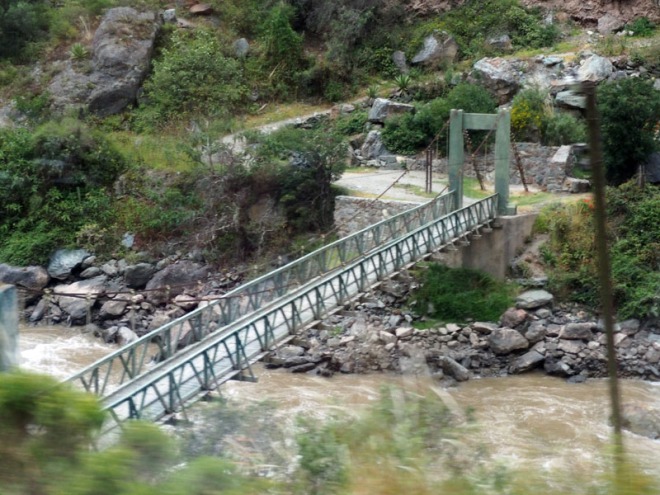 The trail rises immediately on the other side of the river. 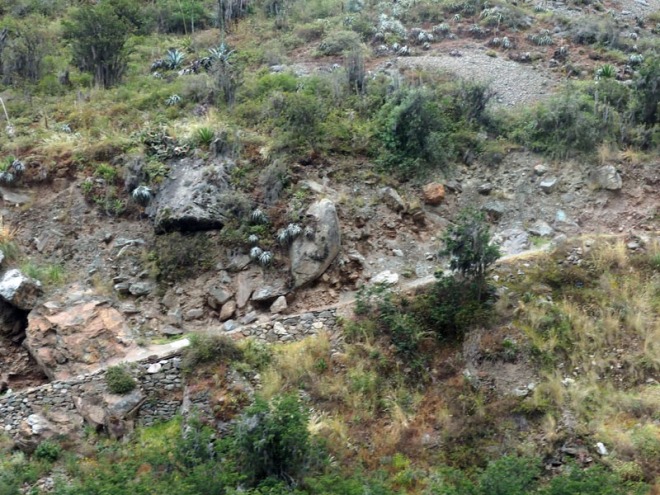 It had started raining by the time the train arrived at Aguas Calientes.  Members of our tour group quickly assembled and exited the train.  We headed off in a line towards the bus stop on the other side of a bridge across the Rio Aguas Calientes.  We managed to follow our leader who was carrying a sign above the crowd with the name of the group.  We followed him through an enclosed space of small shops while trying to get ourselves organized with our ticket and the rain gear.  I almost lost my raincoat in the process, but one of the other members of our group picked it up from the floor behind me.  In the chaos of the situation, I could not even get myself organized to take pictures.

Very soon we were near the front of the line for the buses.  We boarded a bus and headed towards the top of the mountain on the Hiram Bingham Highway.  It was quite a steep climb of more than 1000 feet.   There were 13 hairpin bends on this road.

We finally got to use the restrooms once again (for a small fee) before entering the park itself.  These were the last restrooms we saw for next 3 to 4 hours!

Once past the entrance gates, you come upon this sign commemorating the civil engineering work involved in building the Machu Picchu complex.

There was a good climb at the beginning of the walk.  Machu Picchu is close to 8000 feet high.  It is a challenge for some people.

When we arrived at one of the well known viewpoints, we were greeted by a cover of fog  in the valley. 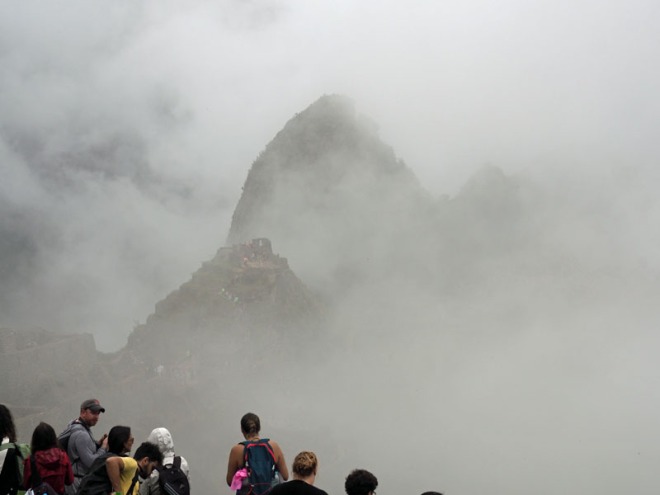 But the clouds were moving rapidly, and one had to be patient in order to be able to get a view of the ruins.  The mountain to the right side in the above picture is called Huanya Picchu.  You can hike to ruins at the top of that mountain.  That sounded tempting, but that will probably only happen in my dreams!

Our patience was rewarded when I was able to take the picture below from the same location.

We walked further up the hill, and on to the Inca trail. 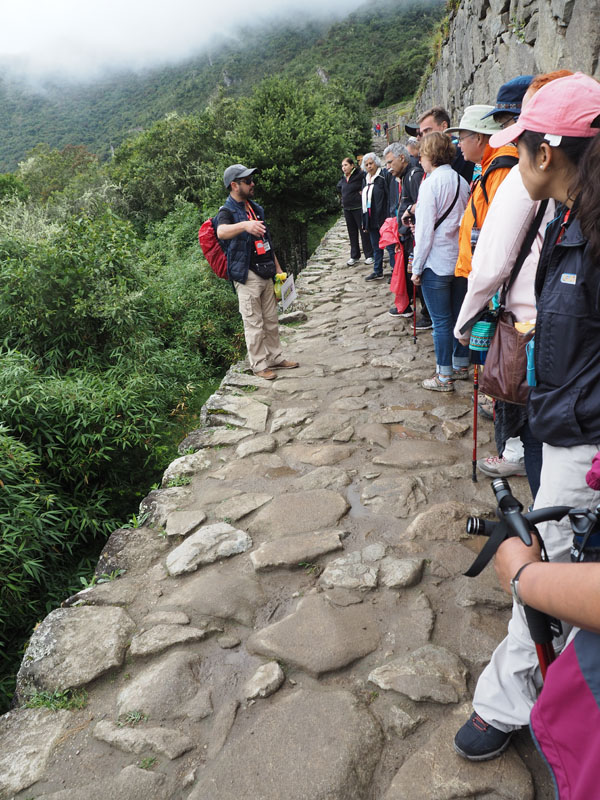 The picture below shows the Inca trail headed in the direction of a pass in the mountains.  This place was full of temptations to do some real hiking!

There were a lot of llamas around the area.  This one looked particularly majestic with its long neck.

It was munching on the grass on one of the terraces.

It rained for a short while we were walking in this area.  Fortunately, the rain did not last too long, nor was it very heavy.

Here are two other views of Machu Picchu from up on the mountainside from which the Inca trail approaches the ruins.  The pictures were taken before we descended into the area of the ruins itself.  The actual peak of Machu Picchu was behind us.  (Again, no time for a real hike!) 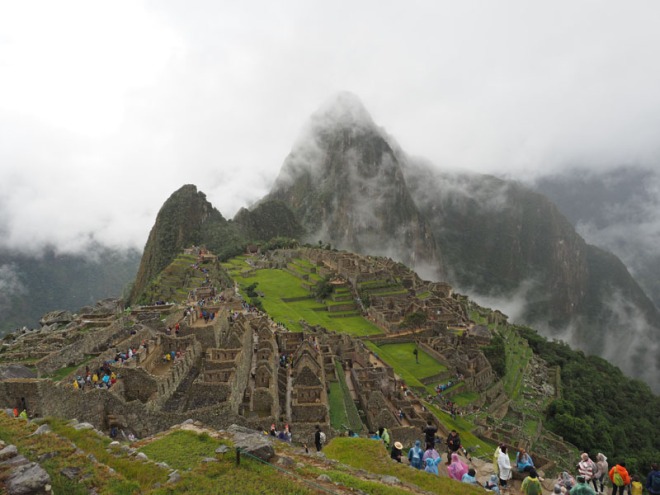 You can see the crowds that throng the place in the picture below.  I had thought that the authorities managed the number of tourists visiting the site at any particular time, and that tourists had to be accompanied by guides, but this obviously was not the case.  The place was packed!  Navigating our way through the crowd while staying with our tour group proved to be a challenge.

The passing clouds and the fog gave us some amazing views of our surroundings.  This is indeed an intimidating and otherworldly place to live in.  The Urubamba river flows at the bottom of the valley surrounded by the towering mountain peaks. 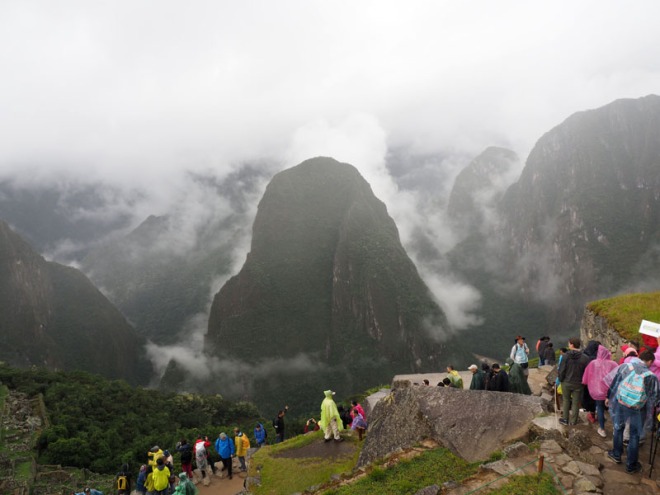 While descending to the ruins, we walked past the Temple of the Sun, or the Torreon. Two of the windows face the direction of the rising sun during the solstices.  There is an altar in the middle.  Observe the stone work in the construction of the walls.

The picture below once again shows the nature of the crowds visiting Machu Picchu.  We ourselves had been up there in the higher sections of the mountain that you see in the picture during the initial part of our tour. (We did manage to cover a few miles during our visit to the place!)

The picture below shows the temple in the main plaza.  Unfortunately, a part of the wall is collapsing.  Note the precise work with the rocks.  Behind the temple is a hill with the Intihuatana, a rock structure whose function is not exactly understood today.  We climbed to the top to see the rock.  (Inti means sun in Quechua, the language of the Incas.  The sun was a very important deity for the Incas.)  The Intihuantana is the highest point within the complex of the ruins.

The four sides of the Intihuatana represent the 4 cardinal points (north, south, east, and west).  There are mountains particular mountain peaks surrounding Machu Picchu in these directions.

We left the ruins after walking through the central plaza area.  I will not post any of those pictures.  I took so many pictures during this visit that I had a hard time selecting the particular ones to show here.  I did not wish this blog to be overwhelming.

The visit to Machu Picchu was supposed to take a couple of hours, but we ended up taking three to four hours.  If I had been on my own, I might have ended up hiking the peaks surrounding the ruins, getting me away from the crowds, and also providing some even more fantastic views of the ruins.  I would actually like to go back, but I have my sincerest doubts that this will happen.

After using the restrooms at the exit to the park, we made our way back by the bus to Aguas Calientes.  We had a nice lunch in a restaurant there, and then caught the 2:30 train to Ollantaytambo.  The picture below was taken from the train. 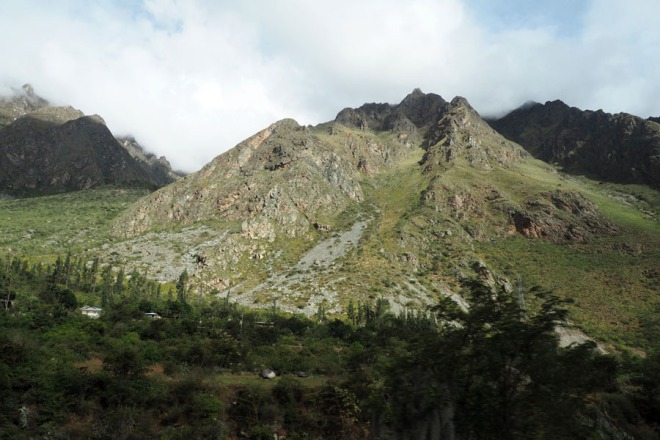 People took time recover during the ride back.

These were our tour managers.  They looked exhausted.

At Ollantaytambo, we boarded our bus to Cusco, our stop for the next two nights.  The day had been busy and tiring so far.

On the way we stopped to stretch our legs.  This place had a store for tourists, and also hostel rooms for the young and the adventurous.

The travelers were encouraged to take part in a game of Sapo at this stop.  It is a Peruvian game. The general objective is to throw the coins into the open mouth of a frog seated on the box.  You are looking at the winner in action below. 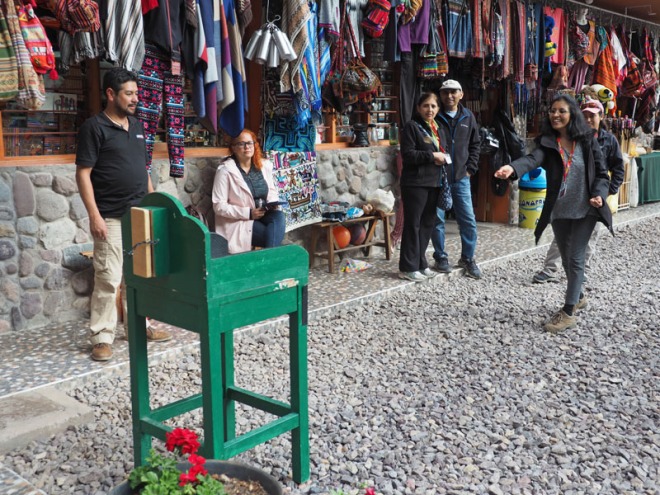 The sun set while we were on our way to Cusco.  We stopped along the way to look at the night sky.  I tried to take some pictures but I have not yet mastered the use of my camera in the dark.

Back in Cusco, we checked into our rooms and walked across the road to a restaurant for dinner.  We were advised to eat light because of the altitude.  No red meats, we were told!  I enjoyed a simple plate of spaghetti, something I had not done in a long time.

And then it was off to bed after a very long day.  The next day was to be spent exploring Cusco.

One thought on “Machu Picchu”