It was about this time during the trip that I finally began to consider the fact that it was going to come to an end soon.  After this one day of visiting places, there would be two more days of travel as we headed home.   Then it would be over. It was all happening too quickly.  But that is the nature of tours like this.  One day you are exploring, and then before you even realize it, you are back in the comfort of your home.  Anyway, having been on trips like this in the past, it was a feeling that was less disconcerting than in past times.

Soon after breakfast, before the tours for the day started, a few of us decided to make a short visit to the Cathedral in the town square nearby.

Some of the locals were already out and about, setting out their wares for the tourists. 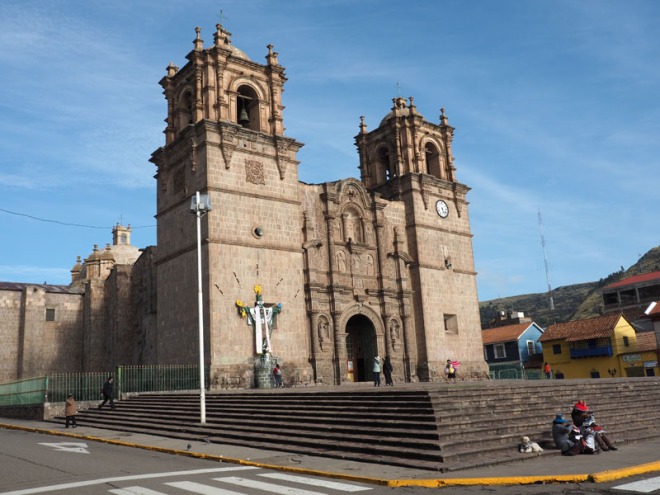 This church is of Spanish origin and was rebuilt in the 1960s after it had burnt down.  It has an interesting facade.  The cross in front is most interesting since it includes both Catholic and Inca symbols on it. 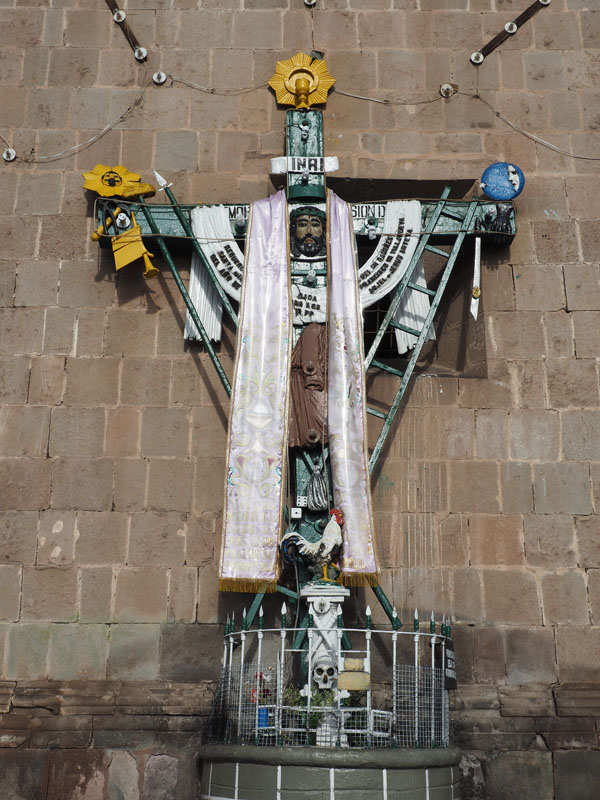 The inside of the church was more traditional.

Close by, at the center of the central square, or the Plaza de Armas, is a statue of Colonel Francisco Bolognesi, a hero of the war with Chile in the late 19th century. 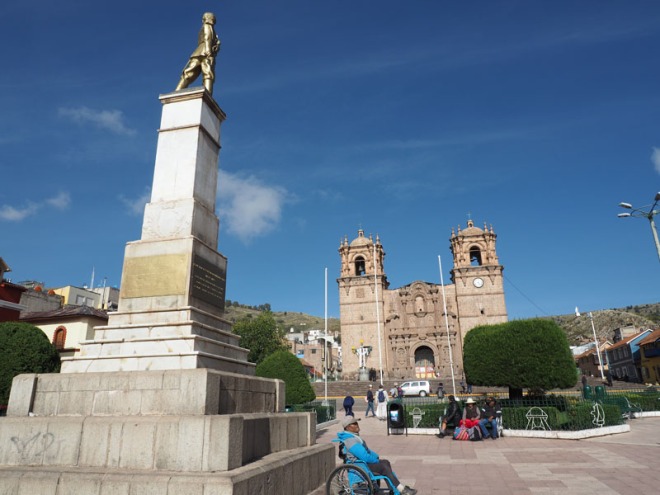 Soon after we returned to the hotel, we set out on the trip to lake Titicaca with the rest of our tour group.  We were visiting the Uros Floating Islands on the lake.  We had to first walk from the hotel to main road to catch the bus to the dock.

Lake Titicaca is the largest inland lake in South America.  It is bordered by Peru and Bolivia.  At 12,500 feet, some call it the highest navigable lake because it can support bigger ships.  It used to be that you could travel between Peru and Bolivia by ship.  We were told that it takes about 10 hours.

The lake is quite deep and supports a variety of fresh water fish and birds, some of them unique to the area.  It has a rich ecosystem.  Human beings inhabited the area even before the Inca times.

As a tourist, there is probably a lot to experience in the area related to the lake, but we had time on the tour to do just one thing, and that was to visit the Uros floating islands.

The bus trip to the boat dock did not take much time.  This was a view of Puno from near the dock.

Here is a tourist boat approaching the dock area, probably one that takes visitors to the Uros Islands.  The lakeside in that area actually did not look very inviting.

On our way out to the islands in our boat, we passed this luxury hotel that was once a prison.  I hope it was worth it for the people staying there.

The islands were not too far from Puno. The boat had to pass through a narrow channel to get to them.  These guys were monitoring entry to the floating islands.

Once we got through the channel, we entered an area where there were a large number of floating islands set in an approximately circular configuration.  There were boats going hither and tither, from one island to another. It was immediately obvious that this space was a destination for tourists.   It was not always that way for the Uros people.  They did not always depend on tourism.

The Uros are an indigenous people who have been living on their floating islands since even before the Inca times.  Their traditional way of life was based on fishing and hunting of birds.  There are still some Uros who practice this way of life, living on floating islands that are farther out in the lake.  In general, this seems to be a difficult way of life which is slowly disappearing as the  young people move to the mainland.

The floating islands are constructed from totora reeds that are harvested from the lake itself.  The reeds are used for many purposes, including food and medicine.

We were taken to one of the many islands in that space.  You can see that the islanders in the picture below were expecting us.

Once on the island, they sat us around in a semicircle for a presentation. They talked about their way of life.  There was demonstration of the process of building an island. 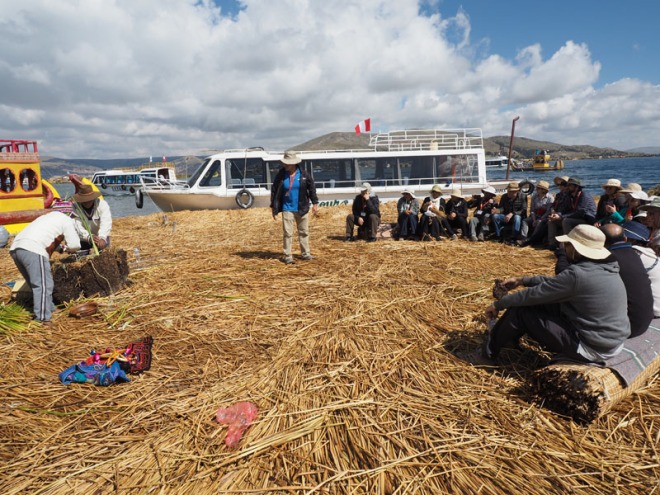 The base of the island is made from the roots of the totora reed.  Bunches of totora roots are bundled together and they are anchored to the bottom of the lake to keep the island in place.  Next, the reed itself is spread out in layers over the base to create the foundation on which life takes place on the island.  You can actually feel the island move when a passing motorized boat creates waves.  It takes a little getting used to.  Our particular island was more than 20 feet above the bottom of the lake.

The totora reed is also used to build the huts in which they live and the boats that they use.  The boats are called balsa even though they are not made of balsa wood. 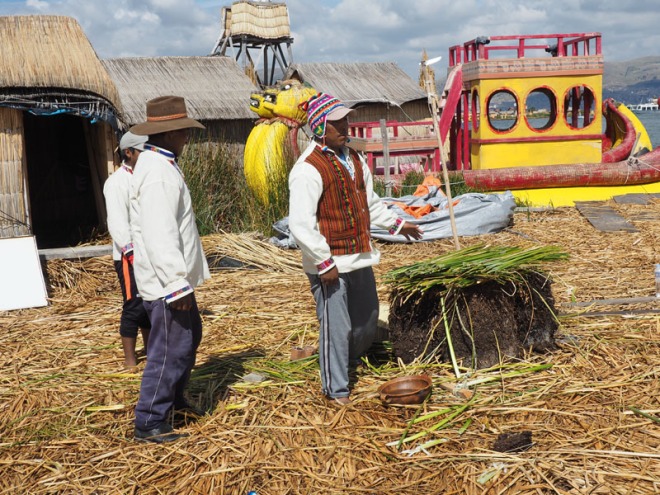 As time passes, the totora reeds begin to rot and the layers of reeds that form the island need to be replenished. The floating islands also have a limited lifetime.  (It sound like a difficult life.)  The islands are of different sizes, and generally support a small community.  We were told that the one we were visiting had about 20 people.

The demonstration included a show of how the homes were set up on the reeds.

Somewhere along the line, I began to feel that the demonstration was beginning to take on the appearance of a comedy show that was being put on for the benefit of the tourists.  I felt a little bad about the fact that this was part of what the Uros people felt they had to do to survive.  It felt like they were going through a certain loss of dignity in the process, and we, the “rich” tourists, were playing our own role in this process.

Some of the people of the island came forward to talk to us about themselves.  The person to the left is the elder on the island, and the the rest of the people were part of his family. 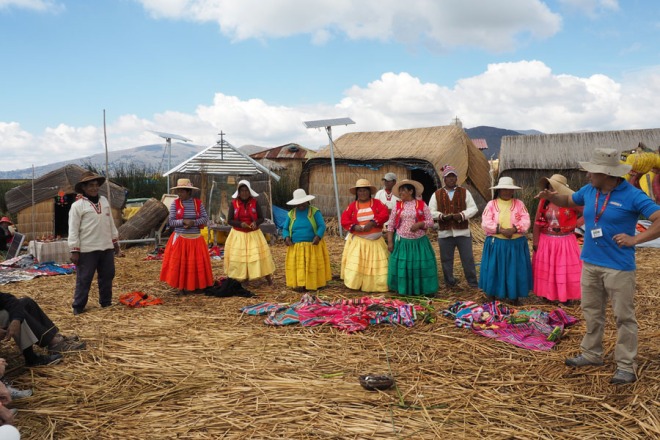 You can see a couple of solar panels in the picture above.  Electricity was brought to the Uros people in the late 1980s by the then President Fujimori. The metal building in the background is actually some kind of chapel.

We visited some of the living quarters, all of which were made of the totora reed.  Space was really tight in these huts.  After that, they had an open market to sell some of the trinkets they had made.  The lady in the picture is the village elder’s wife.

In the picture below, our  local guide, Broz, is showing us that the islanders hunt birds with guns that they make themselves.  (Broz indicated that he had spent a few months living with the Uros people on their islands in order to learn their ways.  This was a part of his training.)  They also make a kind of jerky from the dead birds, and consume the eggs that they lay. 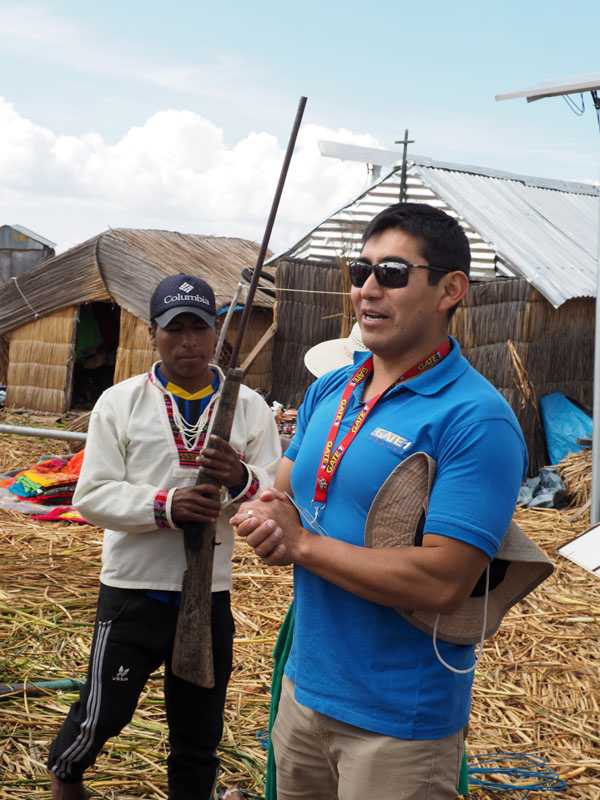 We decided to take a ride in a balsa boat belonging to these islanders to get across to another island on the other side of the expanse of water.  As we left the ladies sang some of their traditional songs to wish us adieu. 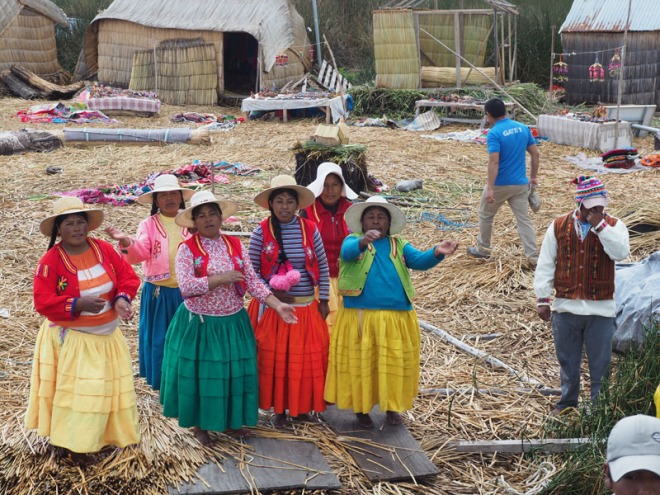 As we were leaving, I took picture of the island that we had just been on.  To the left you can see one of the new composting toilets that is being installed on the islands.  (Things seem to be a little rough today on the floating islands when it comes to attending to the call of nature.)

All of the tourist activity in the area was very obvious as we were rowed across to the other side.

The yellow boat in the front of the picture below is typical of the area.  We were sailing on a similar boat.  It can carry quite a few people.

We landed on an island which seemed to be the focus of the most tourist activity in that space.  It had a regular restaurant and bathrooms, and the tourist presence was actually obscene.  I could not wait to depart.

Some final notes about the Uros people.  They have health issues, and a short lifetime, partly because the water that they consume is a little brackish.  There is salt in the water because the mountains that form the Andes rose from the sea level at some point in the history of the earth.  They have salt in them. The water for the lake comes primarily from rivers that feed into it.

There is a small medical facility on one of the islands for the care of the people, but they have to go to Puno for anything more serious.  As I mentioned earlier, the population is also in a state of decline as young people leave.  Also, the Uros today use the mainland for some of their activities – like for the burial of their dead.  They do not mind using newer technology.  Some own motorboats.  Although I did not see this with my own eyes, I suspect that they must use mobile phones.

We could get a view of Puno from a distance as we departed the islands. 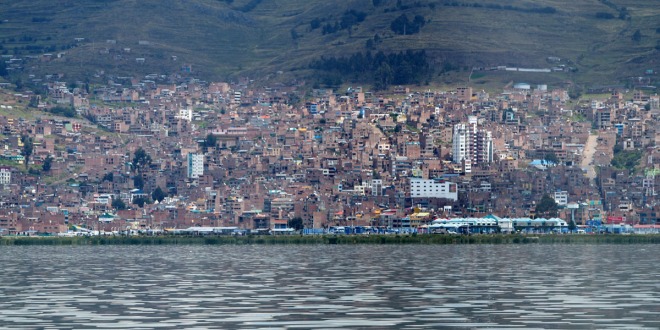 I did see a few birds in the water as we were returning, but was unable to take any good pictures.  I certainly saw a coot, and also another bird with a blue beak.  My research indicates that there is more than one kind of waterfowl in the lake that has this characteristic.

Here is a picture of the last passenger ship that used to sail across the lake.  The SS Ollanta is still available for charter trips these days. It is berthed at Puno when not in use.

We had to get back to the hotel quickly after returning to shore at Puno.  We had a short time for a quick lunch before the start of an afternoon trip to our next destination.  It turned out that the only people who had signed up for this optional trip was our small group of seven people.  The trip to Sillustani that afternoon ended up being another great highlight from our visit to Peru.

One thought on “The Uros Floating Islands on Lake Titicaca”