We knew the drill very well by now.  If we were with a Gate1 tour, and if we were traveling to another place and another hotel, we would have to put our suitcases outside the door by a predetermined time in the morning for pick up by the bellboys.  This time would be well before we actually left the hotel.   When we returned to the rooms after breakfast, the bags would be gone. The next time we saw them would be at the next hotel room.

We went through the routine for the last time during this trip to Peru.  And then we went down for breakfast.  I should mention that breakfast in this hotel included quinoa juice, something we had not tasted at any of the other places that we had stayed in.  People seemed to like it, but I could not handle the somewhat glutinous consistency of the drink and the way it felt in my mouth.  To each his own.

It was another early start for the day since our flight to Lima was from Juliaca, the town we had passed through on our way by bus to Puno, and the flight was scheduled to depart mid-morning.

Juliaca, uniformly, has a very bad reputation as a city for tourists.  It is generally  recommended that tourists not linger there longer than necessary. The best thing you can do for yourself is to get out of town quickly.   It is apparently a place for smugglers. Street crime seems to be a significant issue.  The city government is not very functional.

Puno is a tourist town because of its location, but Juliaca still has a larger population.  We were told the the airport was in Juliaca and not Puno because of the geography of the area.  Another article mentioned politics as a reason for the location.  In any case, the airport is small, and there are very few flights out of it.  The whole place was almost empty when we showed up for our LATAM flight.

The only commercial airports that are at a higher altitude than the one in Juliaca are in China and Bolivia.  Juliaca also has the longest runway in South America.  This is because of the altitude.

We ended up being joined at the airport by another tour group from Gate1 that was heading back to Lima. (There was a suspicion that these folks were a part of a more expensive tour package, and that they might have stayed in the prison/hotel in Puno.)  Gate1 customers took up a significant number of seats on this flight.

The security process was a little different than I am used to during recent travels.  The security check was in a small space, and the single scanning machine was apparently not very sophisticated.  I had to open up up my computer bag and all of its pockets to show what I had in it.  But they did not create a hassle. 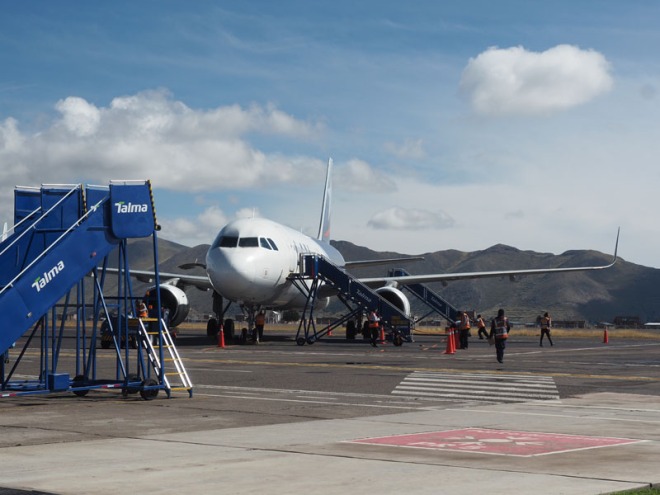 Sitting in our aircraft seats prior to departure, we noticed a few sheep being loaded into the cargo compartment.  What fate awaited them in Lima?

The aircraft departed the terminal area without having to to be pushed back. It turned around and headed straight for the runway.  And then the aircraft was rolling down the runway.  And we kept rolling down the runway as if we were going to remain on it for a while.  Finally, after about 40 seconds, the plane gently lifted off the ground.  I know the time because I measured it.  (We had been warned about what to expect ahead of time!)  It all had to do with the thin air at that altitude.

It was an uneventful flight over the Andes. 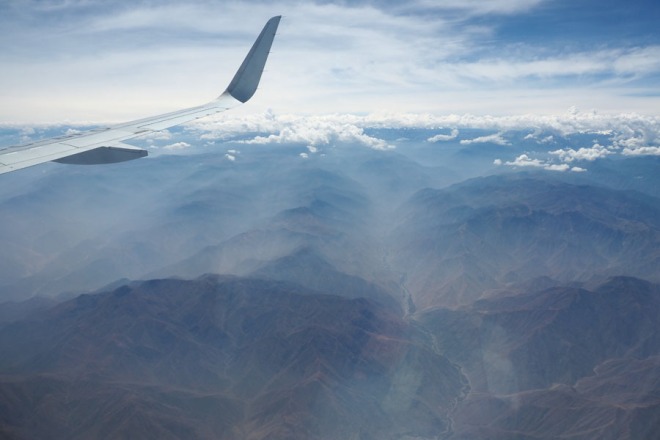 Soon, we had landed in Lima, and we were back to sea level – breathing in the heavily oxygenated, but perhaps more polluted, air.

By the time we got from the airport to the hotel and had our lunch, there was not much time left for further explorations of Lima. We took a walk along the cliff that ran along the coastline at Miraflores.

It was going to be difficult to get down to the beach itself.

We walked to a supermarket not too far from our hotel to buy some local goods.  Got some Kiwicha for breakfast and local chocolate bars.

Back at the hotel, we got on a bus and headed out to a restaurant for our final dinner as a group. 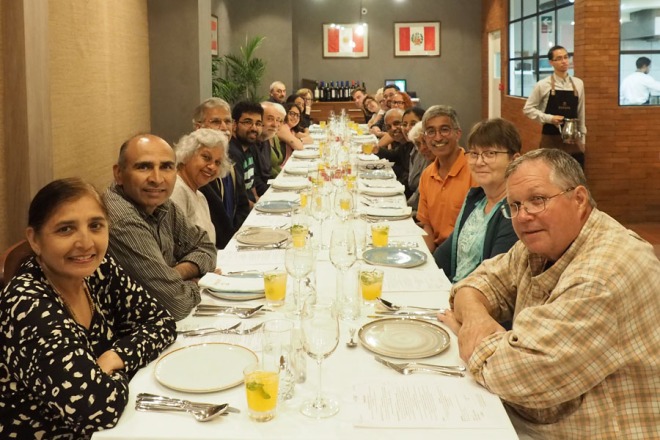 We said our goodbyes back at the hotel.  We had made a few friends during the trip.

Our tour manager was also heading home to be with his family in Cusco.  He would not be seeing us off at the airport.

We had to leave the hotel before well before daybreak in order to catch our early morning flight to Orlando, Florida.  We were accompanied to the airport by a local agent from Gate1.  Everything went smoothly.  I was surprised that the aircraft that we flew out of Peru on was a small one.  It was packed with kids, most probably headed out to see Mickey and friends.

With customs and immigration taken care of after landing in Orlando, we were back on ‘Merican soil.  There was a vague sense of being back in a familiar, and even comfortable, place,  but the sense of adventure and expectation that comes with being in a new place had also come to an end.  You could feel the senses immediately beginning to dull.  The rest of the trip was going to be very predictable – even if there were any issues that cropped up during the rest of the trip home.

We got back home in time for dinner.  There was nothing in the fridge that could be consumed immediately. Our regular standby, California Tortilla being closed, we had to settle for the 24 hour Wendy’s close to home.

And then it was over.

But the memories of this exciting trip will stay with us for the rest of our lives.

One thought on “Heading Home from Peru”