This particular blog in the series about the bike ride is coming out a little later than usual.  First of all, I want to assure all of you that we completed the ride without any accidents.  In light of what happened to me in 2017 on the last day of that ride, I was especially relieved and happy that I made it without causing any damage to myself.

The blog is late because I am now in the relaxed atmosphere of home,  in a more relaxed state of of mind, not having to worry about the next day’s ride.  Perhaps this blog will also be more coherent as a result.  Perhaps, unfortunately, it will also tend to go on a little longer than usual.  Let me begin to the talk about the events of yesterday without further delay.

To remind readers who are following the blog, we were starting the ride this day at Meyersdale, PA, where we had spent the night at Yoders B&B.

Breakfast at this particular B&B was continental style, the first time it was happening at a B&B during this ride.  I did tuck in more food than I expected despite this fact.  Bike rides tend to make you hungry!

As was my habit during the ride, I did take some pictures outside the house before departure.  The two pictures below are repetitive, but what the heck!  The first picture is of the diner and the small old motel, still in use, in front of the B&B.  The second picture is of the B&B itself. 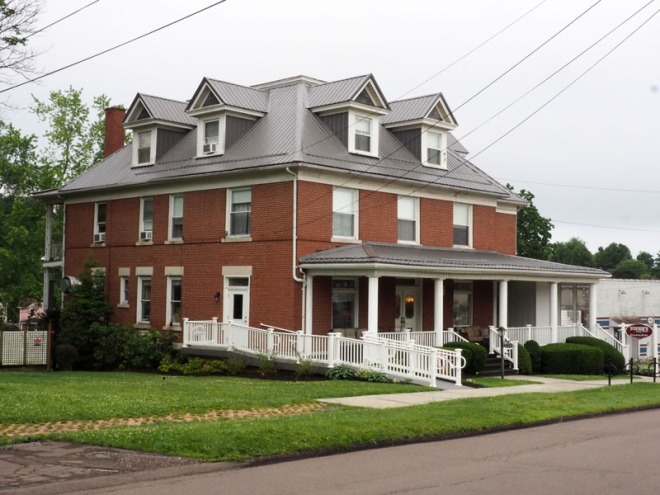 Koushik had bought everybody new riding jerseys with the GAP logo on them. 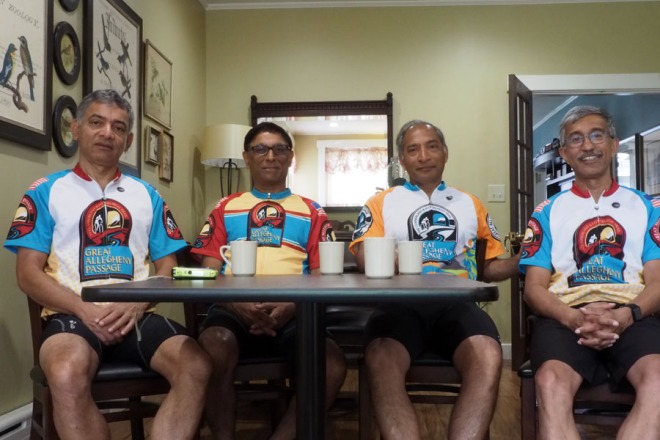 The ride started with a somewhat steep climb through the town itself to get back to the trail.  Back on the trail, it was back to the regular uphill climb, but with a much reduced angle of attack than what we had experienced in town.

The first landmark we passed was the Bollman truss bridge.  It gets its name because of the design of the truss. This particular bridge was transported from another location in another state to the trail.

The next stop was the Keystone Viaduct bridge. 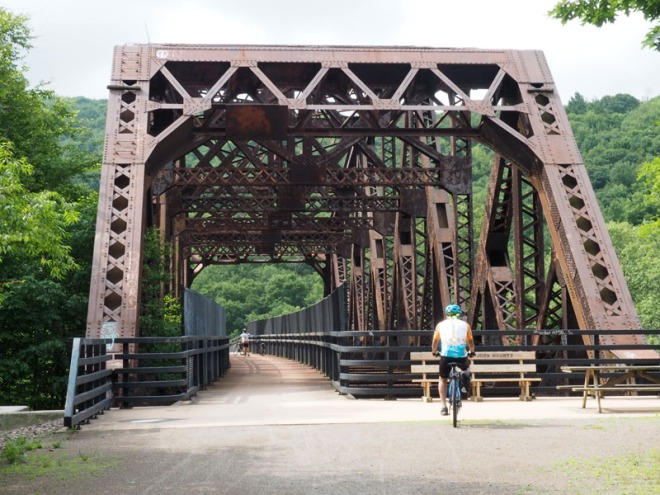 We crossed the CSX railroad tracks below us.

The Flaugherty Creek flowed below us next to a roadway. 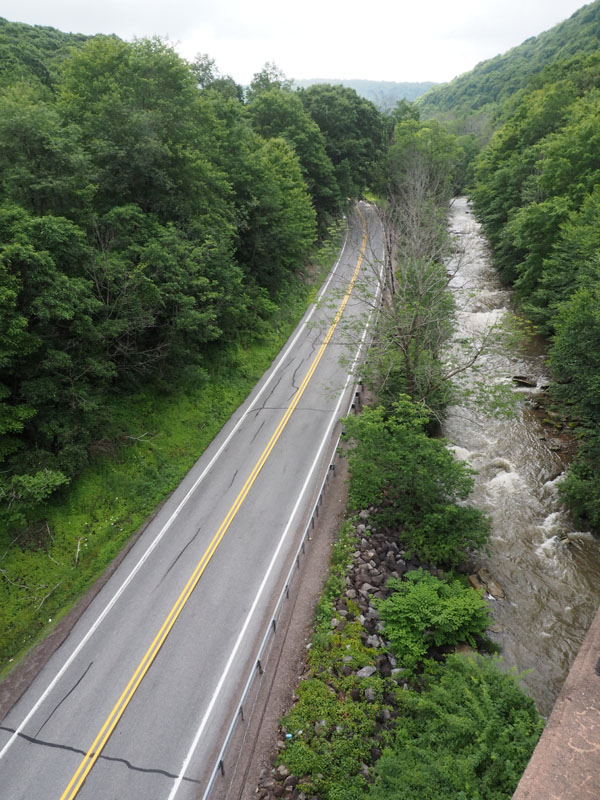 There were windmills on the ridge in front of us.

The ride took us up the side of the ridge and on to a flatter and more open area behind it. 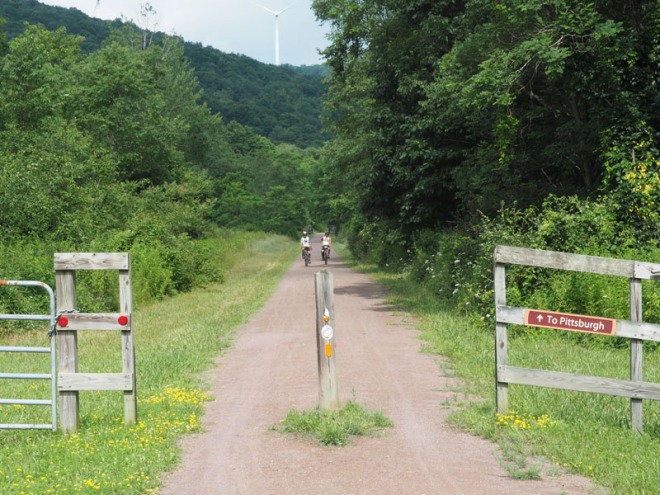 We crossed the Flaugherty Creek a few times during this section of the ride.

We made a pit-stop at a place called Deal to use the restroom. 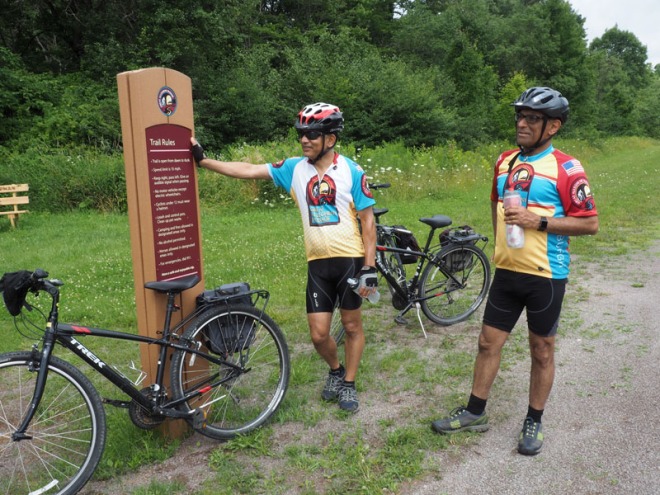 The trail was surrounded by meadows and wildflowers of different colors.

The next milestone was the Eastern Continental divide.  This was the highest point of the bike ride.  It was going to be a downhill ride the rest of the way!

Koushik photo-bombed the picture I was taking of the elevation range of the GAP.

He always gets great elevation on his jumps. 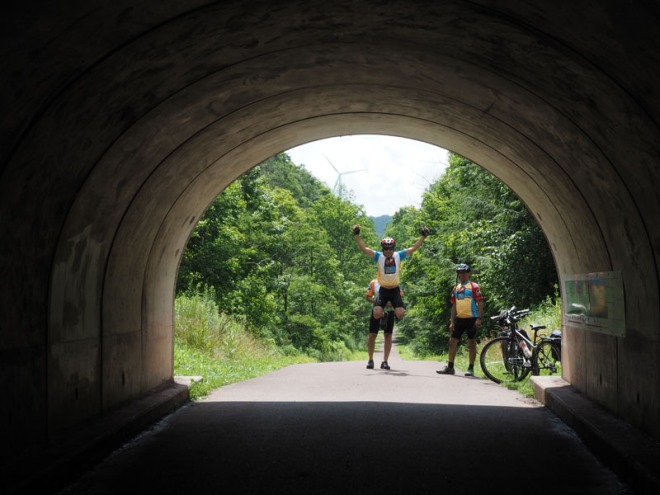 The next stop was at the 3000 foot long Big Savage tunnel.

I would not recommend the activity shown in the picture below to anybody! 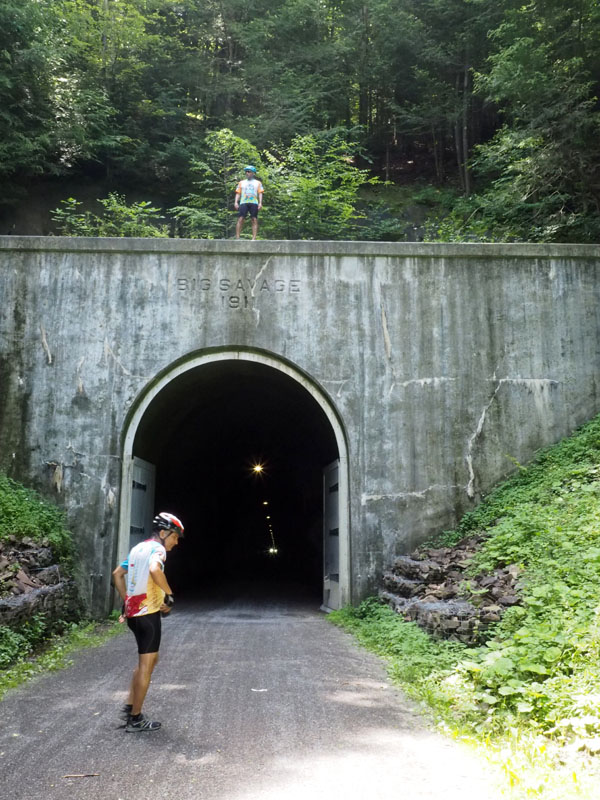 It almost looked like there was a car approaching us through the tunnel. It was actually the light from two bicycles next to each other. 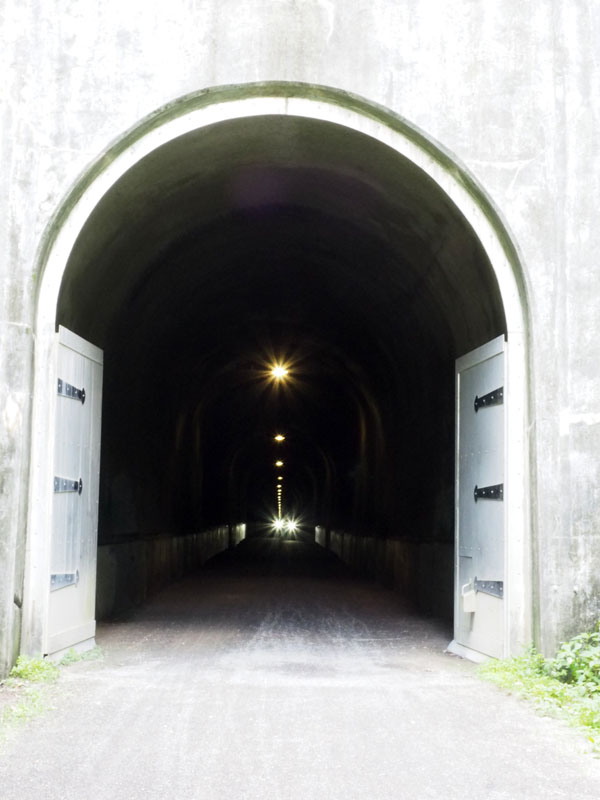 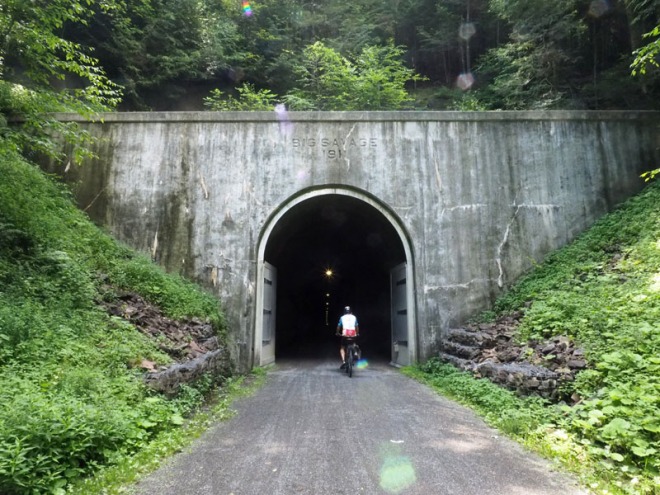 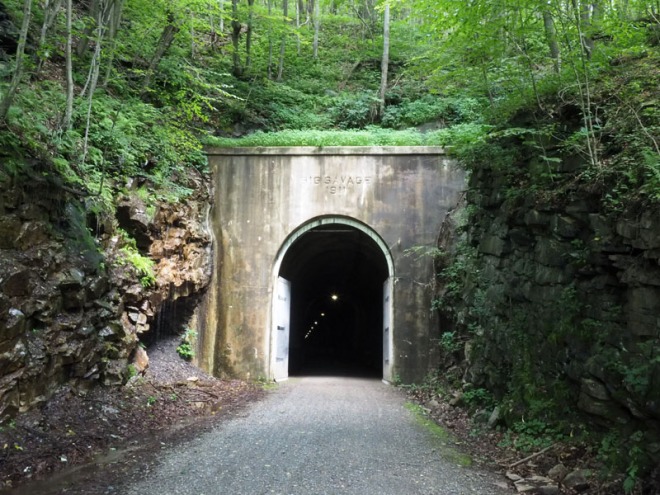 This is what it looked like from a viewpoint just outside the tunnel.  We could see the entire valley in front of us (click on the picture!).  The Cumberland Narrows that we are heading for can barely be seen in the distance, and is better visible in the picture below this one.

There was always the photo opportunity to be taken advantage of. 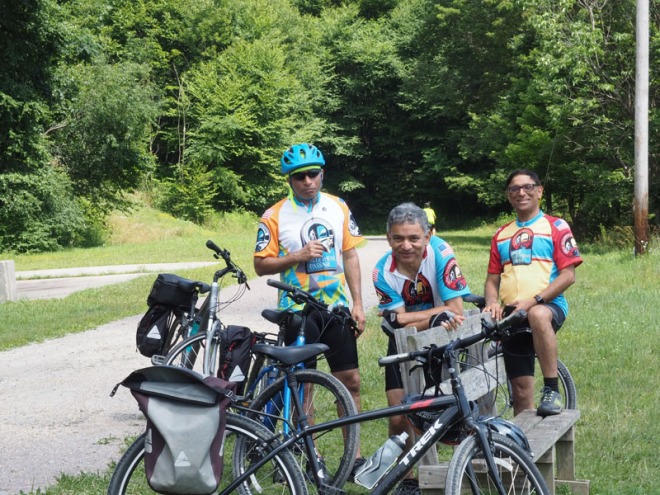 It was at this point that Shankar realized that he had left his riding gloves behind at Deal. Two of us decided to ride back to look for it, while the others pedaled on.  They would wait for us further along the trail.

Shankar and I zipped back to Deal on our bikes to find that the gloves were not there.  As we were returning, we passed a tour group that was traveling in the same direction as we were.  Hoping that the person supporting the tour whom we had talked to at Deal (he was carrying snacks for the group in a van and met up with the group at certain points) had picked up the gloves and taken it on to Cumberland, Shankar talked to person who was actually riding with group.  She confirmed that the gloves had been picked up and taken to Cumberland!  Shankar could pick them up there!

We ended up riding 5 to 6 miles more than the others, and we also experienced the Continental Divide and the Big Savage tunnel thrice in a single day!

Koushik and Ram were waiting for us at the Mason Dixon line.  This forms the boundary between Pennsylvania and Maryland. 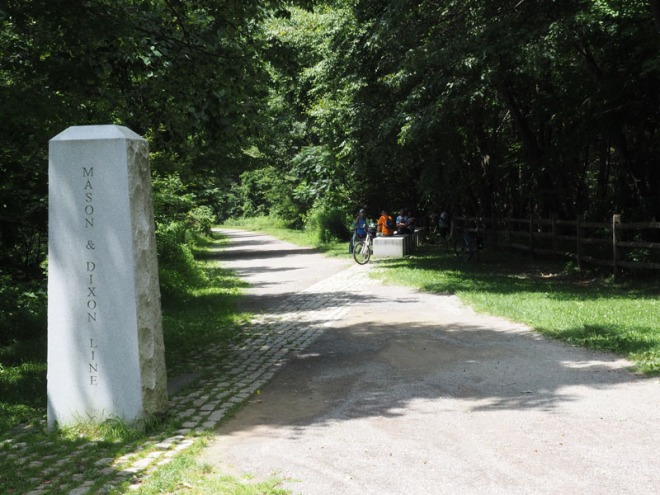 The trail was taking us steadily down the side of the ridge.  We picked up a lot of steam going downhill.   We passed the side trail for the town of Frostburg next.  We decided not to take this trail because it required a stiff climb up a hill, and also because we were running late.

The railroad tracks that are used by the Western Maryland Scenic Railroad excursion train going between Cumberland and Frostburg appeared soon after.

The trail and the tracks would run next to each other the rest of the way into Cumberland. 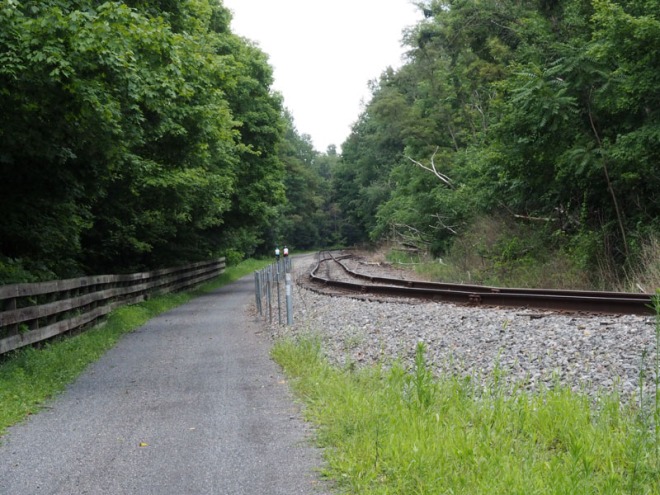 From this overlook above the town of Mt. Savage, one could see the ridge that we had just ridden down.  We had some difficulty sighting the entrance to the Big Savage tunnel from this distance. 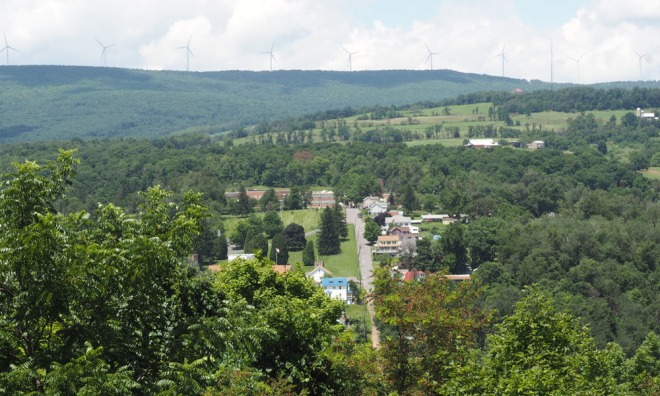 The trail crossed the railroad tracks in many places, from one side of the track to the other.

We had been told about a big raspberry patch next to the trail.  We stopped there to pick and eat fruit.

The fruit was quite tasty.  I was picking it off the plant and popping it into my mouth.

Ram was collecting the fruit to share with the folks meeting us at Cumberland.

We passed through a tunnel that was shared between the trail and the rail line.  There is a little fence running in-between the two through the tunnel.  As with the Big Savage Tunnel, it felt much cooler riding inside the tunnel than outside it. 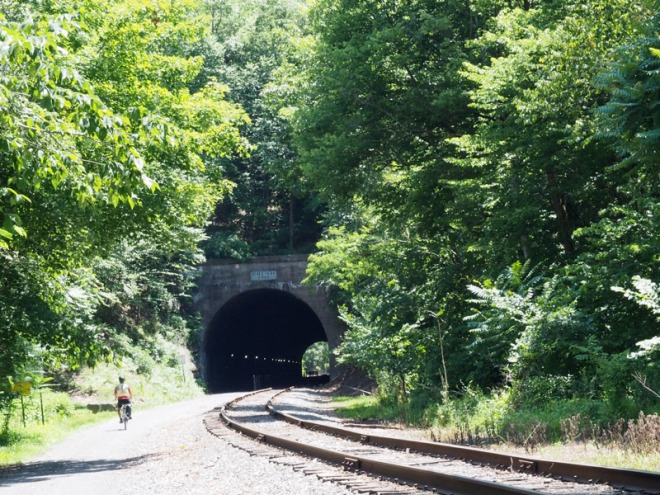 Finally, we were in the Cumberland Narrows, getting very close to our destination!

We rode slowly into town.  As we crossed the finish line, we were greeted by family and friends.  Ganga, our classmate from high school who was visiting from India, garlanded us.

Our spouses were there to meet us.

and posed in front of the statue that marks the beginning of the C&O canal. 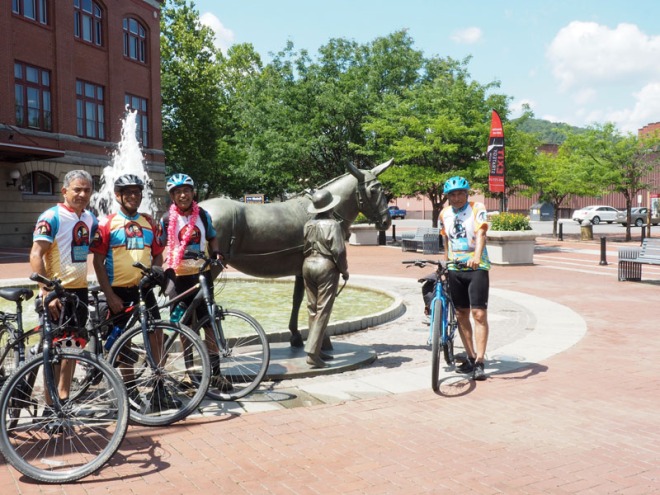 It felt great to have made it, and to have been greeted by our close friend and family at the end.  We had covered 150 miles of trail safely.

It was amazing that we also met many of the people we had encountered in previous days along the trail, starting all the way back in Confluence, at Cumberland.  The little boy, Henry, had also arrived with his dad.  I still cannot get over the fact that a 7 year old rode the 150 miles of trail.

We picked up our luggage after returning our bikes to the place we had rented them from and went to a local restaurant for lunch.  Some of us celebrated with a beer or two even though it was early in the day.

Ram returned home to Pittsburgh soon after, while the other riders came home with us to Gaithersburg.  Exhaustion hit during the drive home and folks took naps in the car. Koushik and Shankar departed town today.

All is quiet at home.  The adventure has ended.