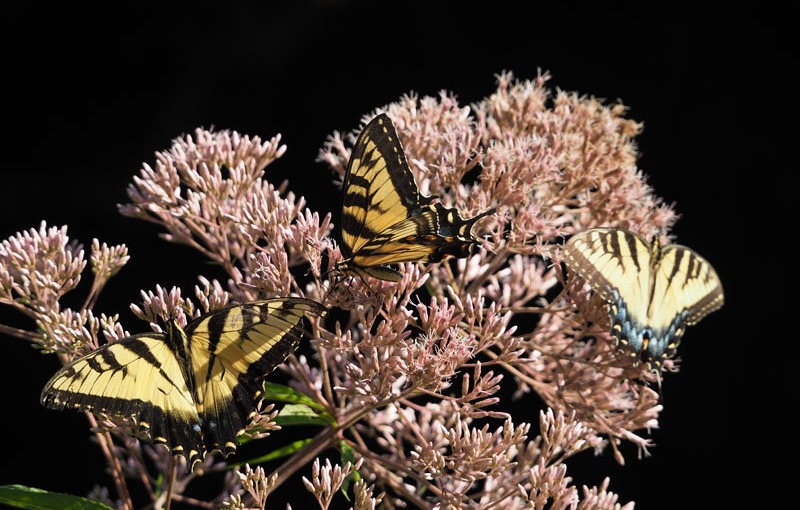 I saw this at the website of the National Park Service for the C&O Canal Park after I got home from my bike ride.

I might have been the only person to ride the section after it was closed.

In fact I had to cross this barrier at Pennyfield Lock to exit the closed section after I was done with my ride. 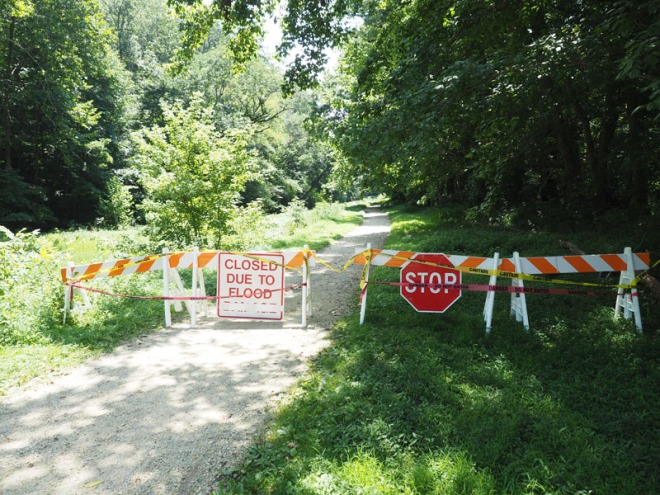 Earlier on, I had encountered a young girl working for the NPS who belonged to the Student Conservation Association who was taking a count of the number of fallen trees in the closed section.  She said that she had counted 20, and that she had stopped because she had come to an impassable section.  I was able to cross this section by carrying my bike off the trail and back on to it. 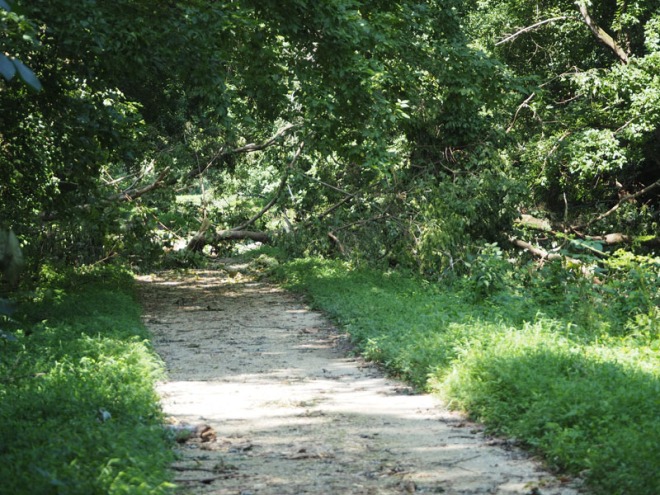 The section of the trail in the picture below looked beaten up from water flowing over the trail. 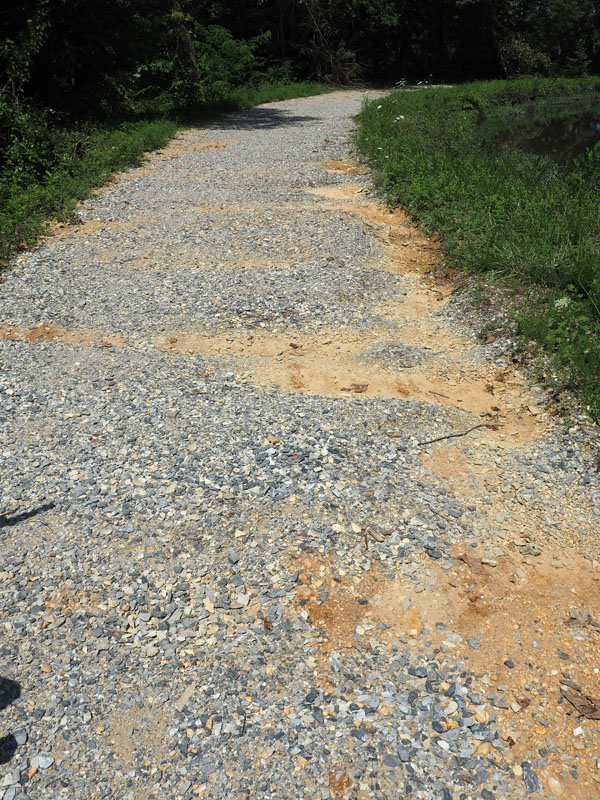 A park ranger had stopped me earlier.  He looked a little upset when he saw me.  He got up from the stump he had been sitting on.  “Did you not see the sign that the trail was closed?”, he asked.  I had been prepared for the encounter.  “I have to get back to my car which is parked at Pennyfield Lock,” I said.  He immediately relented.  He actually smiled.

I had actually encountered an NPS pickup truck with a couple of kids earlier on in the closed section of the trail.  They were backing away from the site of the destruction on the trail, all the way back to Swain’s Lock it seemed. Because of the width of the towpath, there was no place to turn the pickup truck around.  They had told me to be careful, but had made no attempt to stop me.  The kid mentioned that they were not responsible if I hurt myself.

Back at Swain’s lock, as I approached the sign for the blocked trail, I had a decision to make.  I could stay on the trail, or I could try to get to the main road and ride along the road.  Riding along the road would have added a couple of miles to the ride, and it would have also involved riding up and down decent slopes on the side roads to get to the main road.   It would have also been more dangerous because of the traffic on the road.   Besides, I was tired after having ridden more than 30 miles at that point.  It did not take too long for me to decide to stay on the trail and face the consequences of my action if I encountered somebody who objected.

At that point I was returning from a ride all the way out to Fletchers Cove.  The highlight of this ride was the stop to see the swallowtail butterflies feasting in the morning sun on the milkweed growing beside the waters of the canal. 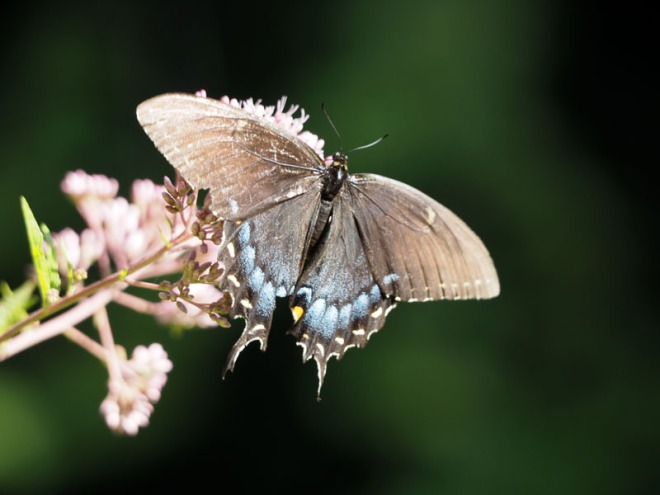 Crossing the damaged section of the trail earlier in the morning on my way out had been an adventure in itself.  I could ride my bike for only short sections at a time.  I had to carry my bike over tree limbs laying across the trail, and walk under fallen branches balanced over me.  I even had to carry my bike off the trail through the woods to get past one section.  Fortunately folks had created a path off the trail in this section.  (The trail must have been blocked for at least a little while at this point in time for this to happen!)  I carried my bike past the park ranger who was sitting in his front-end loader on the trail.  He did not stop me.  Perhaps he remembered me later in the day when I encountered him again, which was why he let me get by that time.

The destruction was extensive.  Trees were fallen all over the place.  The trail had also been washed away in a few sections, as if the canal had overflowed.  I kept going.

When I started the ride earlier that morning, I had met a person who had just finished his bike ride.  He had warned me about the fallen trees, but had apparently gotten through to the other side, where the trail was completely clear.  He did not say anything to discourage me from my plan to ride towards the city.

The strange thing about what I saw on the trail was the localized nature of the damage.  I have a hunch that some kind of twister must have touched down during a storm that had taken place a few days earlier.  The funny thing is that I was not aware of the extent of the storm when it happened even though the trail is not too far from home.  I wondered how things might have looked on the trail when the storm was actually happening.  The power of nature is awesome.

And that is the end of this little tale told backwards!