It was very, very, cold the the next morning. According to the weather app, the local temperature was about -3° F outside when we woke up.  Fortunately, we did not have to go out immediately.  A breakfast of cooked oats and hot coffee warmed us up for the outdoors.  I made sure to start the car up early to try to warm it up for others.

Our first stop  was the West Yellowstone airport. Our rental car company had a counter there where we could register another driver for the car.  The airport itself was quite tiny, and it was about to close for the winter.

Traffic in the town of West Yellowstone was light as we drove through.

After entering the park we drove for a while by the Madison river. 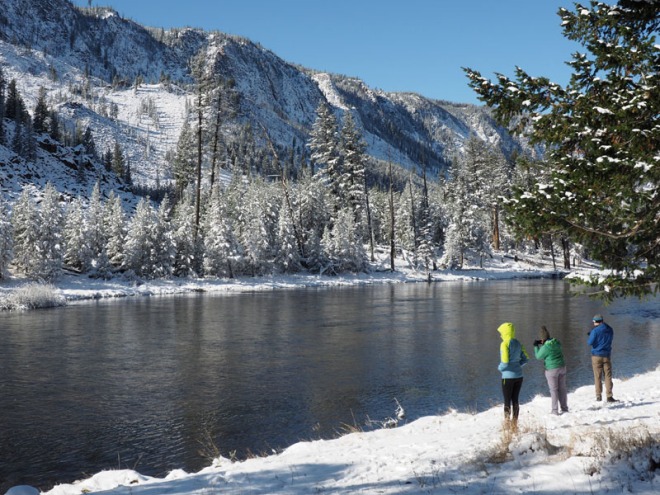 At a place called Madison, we took the road going north towards our first destination of the day – Mammoth Hot Springs.  The other option would have been to take the road south towards Old Faithful.  Our plan was to head to Old Faithful later in the day.

During our drives, there were sometimes places where steam rose from close to, or even  underneath, the roadway.  There were parking lots  to pull into to take in the sights.  This particular place where we stopped was called Terrace Spring. 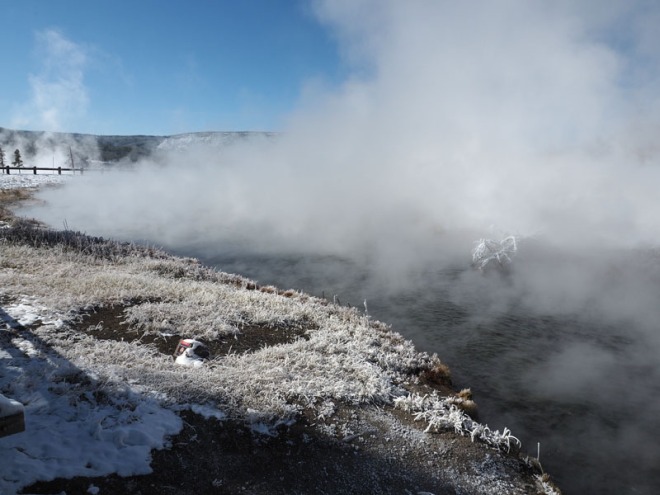 You can see the steam and hot water bubbling out of the ground in the picture below.

When you stop at places like this, you usually walk on boardwalks that have been put in place.  This protects you from the unstable ground under.

The recent snowfall made things a little tricky on this boardwalk. In order to prevent contamination, the park avoids the use of salt and other chemicals to melt snow and ice from their boardwalks and roads. 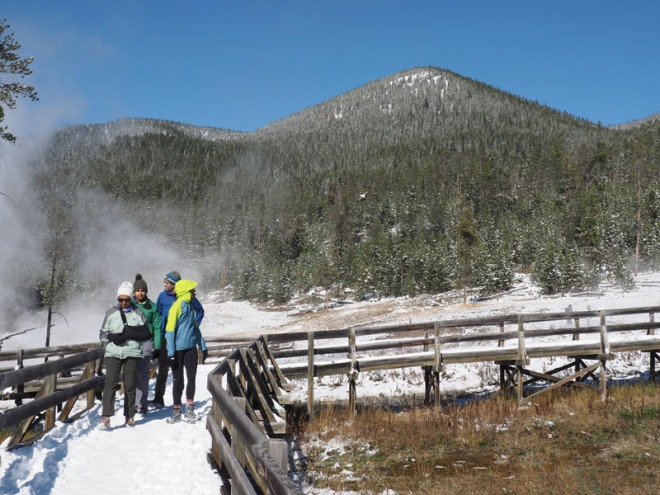 We stopped for pictures at Gibbon Falls on the Gibbon river.  The parking lot for this view was just beside the road.  The Gibbon flows into the Madison river.

The meadows were covered with a light layer of snow.  We saw bison close by in one of these meadows.  I took pictures with my zoom lens.

We drove through the Golden Gate Canyon that connects Mammoth Hot Springs to the the rest of the park.

We stopped at the parking lot for the Mammoth Hot Springs Terraces.  It was time for lunch.  Our sandwiches were made with peanut butter and banana, a combination that, along with the steel cut oats that we had eaten in the morning, created a lot of extra activity on my digestive system.  It was good to be able to walk it off in the open air.

From the area of the hot springs, one could see Fort Yellowstone below us.  A visitor center and park headquarters is located there today.

It was possible to take a trail from where we were to the fort.  Instead, we decided to walk on the Upper Terrace Loop Drive.  The road was closed to motorized traffic, probably because of road conditions in certain sections. 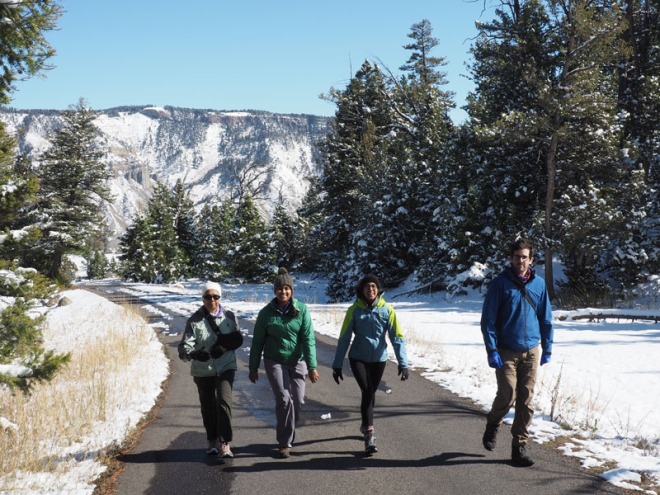 This is one of the formations we came upon during the walk.  It is called the Orange Spring Mound.  It was formed over many years by the deposition of the minerals from  the water (steam) emanating from the earth.

This is called the White Elephant Back Terrace. 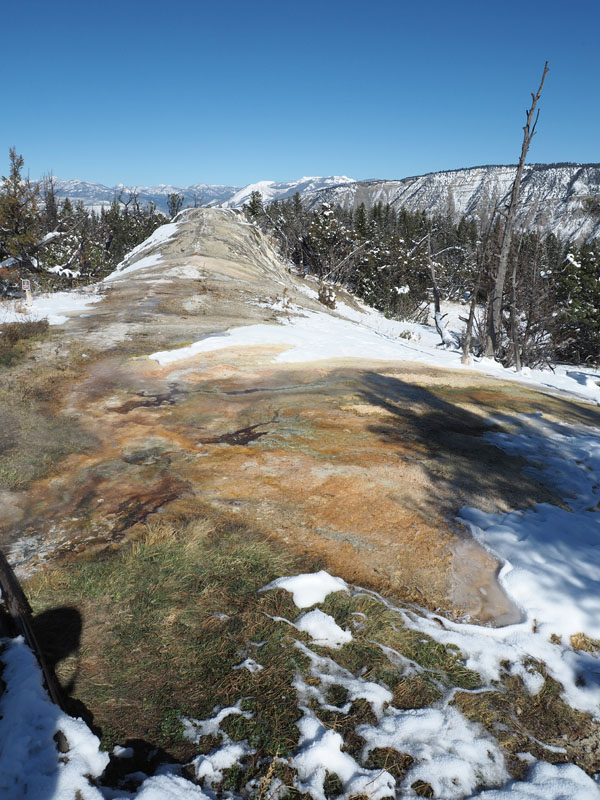 The area below is called Angel Terrace.  You can see the interaction of the hot water with the fresh snow. 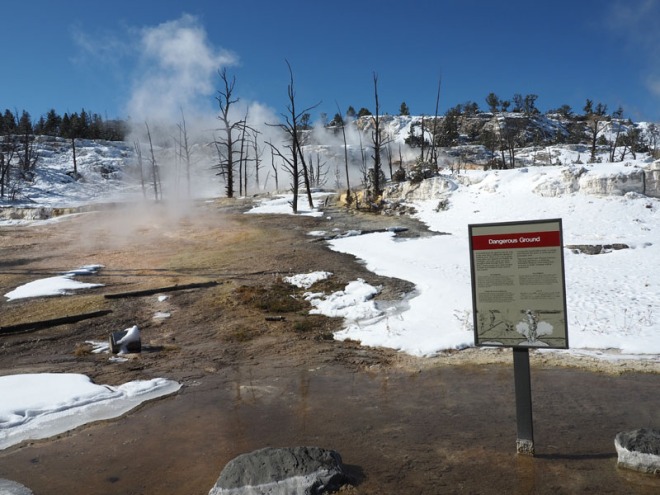 We stopped to look at some of the activity on the lower terrace of Mammoth Spring on our way back from Fort Yellowstone.

Then it was on to Old Faithful.

During our drives we saw people fly fishing in many of the rivers and creeks.  The folks would be right out there in the middle of the water flow in their waterproof waders.  They did not seem to be feeling the cold. 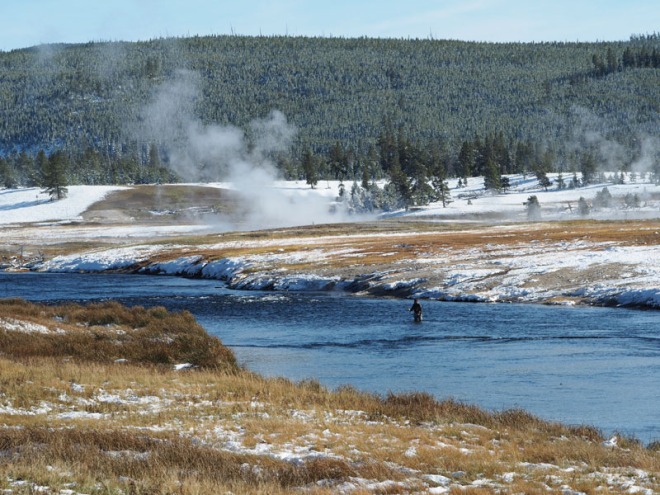 We headed straight for the geyser after getting to the parking lot at the Visitor Center for Old Faithful.  It was fortunate that we did this because the geyser put up a show and erupted within a few minutes of our arrival.  It was perfect timing.

It all looked benign when the activity started.

The geyser built up steam slowly. 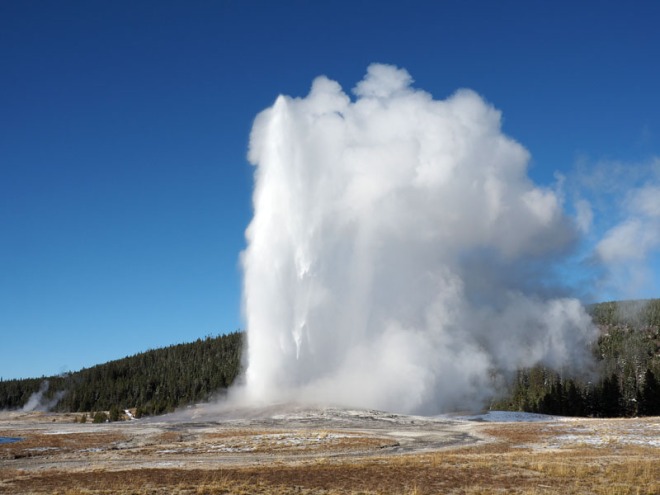 And then the wind began to carry the steam high into the sky!

The activity was over within a few minutes.  Old Faithful erupts about once every hour and a half these day.   It used to erupt once an hour in the past.

A stop at the Visitor Center allowed us to catch one of the videos that they have about a park.  We make it a point to try to see these videos whichever national park we happen to be in.

It was time to start making our way back to Park Island.

We ended up making two stops along the way. One was at the Black Sand Basin. It was going to be a quick drive by, but I was intrigued enough by what I saw that we spent a little more time.

This picture shows the different colored minerals that are being deposited on the rocks from the hot water and steam coming out of the earth.  The colors are muted in the picture below because the sun was  setting behind a mountain at this point when I took the picture.

The following pictures were taken on the Fountain Paint Pot trail further along the drive back to Park Island.  We walked along a boardwalk.

There was a section of the boardwalk here that was so slippery that only two of us followed the loop to its end to get back to the car.  Others retraced their paths in order to get back.

The Paint Pot walk was the last stop for us within the park that day.  In general, there were many more locations where one could have stopped to experience the wonderland that is Yellowstone National Park.

On the way back, we stopped in West Yellowstone once again for dinner.  The place we ate at was called Beartooth Barbecue.  The food was good, and the place was crowded.  They told us that they were about to shut down operations for the winter.

Back in our log cabin in Park Island, we were hoping that the heating issues would have been addressed.  Unfortunately, that was not the case.  Fortunately, the temperatures had risen a little bit – but it was still below freezing in the night.

I cannot remember much more of what happened that evening.  This was going to be our last night in Park Island.  We were going to drive through Yellowstone towards the Grand Tetons the next day.

The next blog in this series here.