And so it is time to put these series of blogs out of its misery.   It is time to end this long tale.  I have already said most of what I wanted to say for this last part of the trip, but I did that at the beginning of the story, and you may have already forgotten all of that.  I shall add to the original account that I gave.

After a nice breakfast, we departed the Silver Creek Hotel 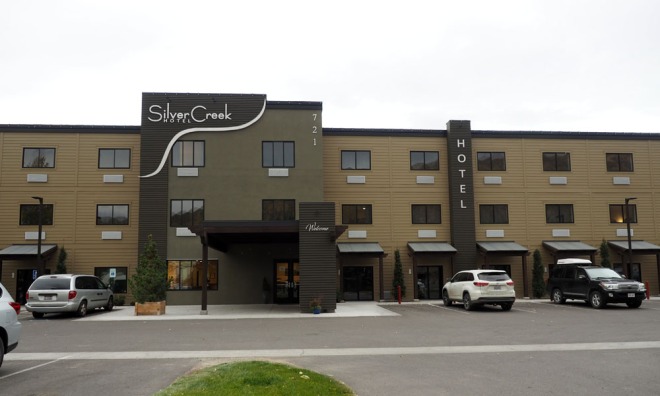 and Bellevue for the Sawtooth Mountain National Recreation Area.  The weather was somewhat dreary.  The drive through the mountains was still spectacular, and a little challenging where snow was falling.  Many official facilities in the recreation area were already shut down for the winter, and there were very few people around.   I had planned for a hike at Redfish Lake to be a highlight of the day, but that did not pan out.  The plan finally fell apart at the starting point of the trail.  That impacted my mood the rest of the day.

The little town of Stanley was interesting. 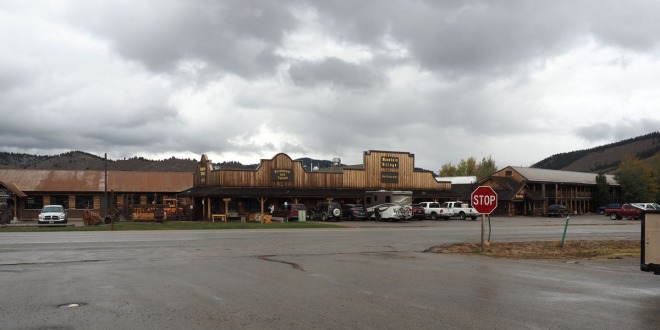 Stanley was the extent of our northward exploration on the Sawtooth Scenic Byway. 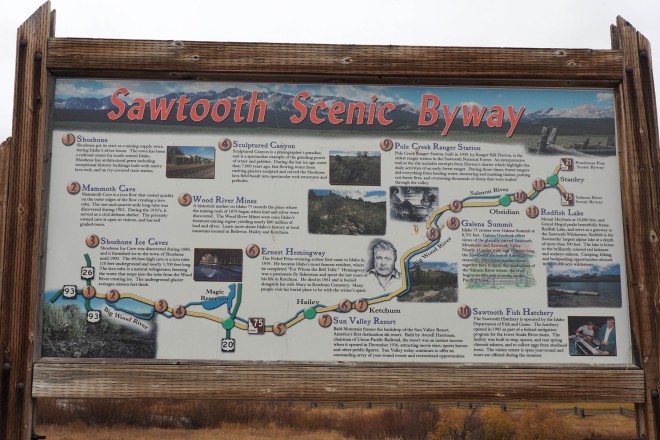 We stopped by the road for lunch on our way out of the park.  The traffic was so light, I was able to take this picture.

We took a short walk in a park along the Big Wood River just before we got to the towns of Sun Valley – Ketcham, Hailey, and Bellevue. 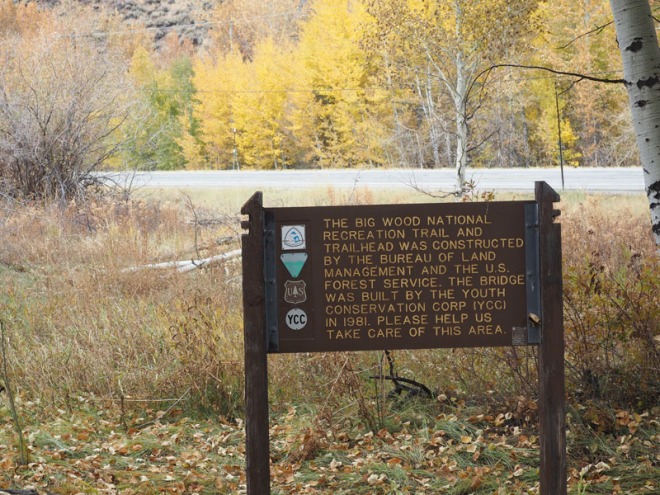 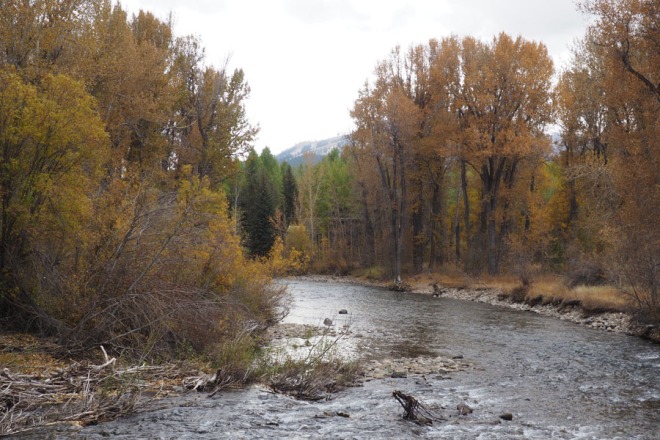 We did a hike at Shoshone Falls in Twin Falls. 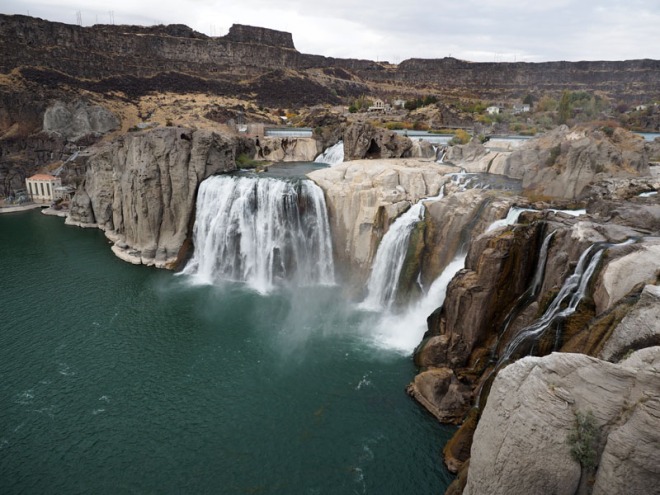 It took us some effort to find the actual trail.  We started the walk not knowing where it would take us.  We ended up climbing out of the canyon to get a view of the Falls from a unique vantage point. 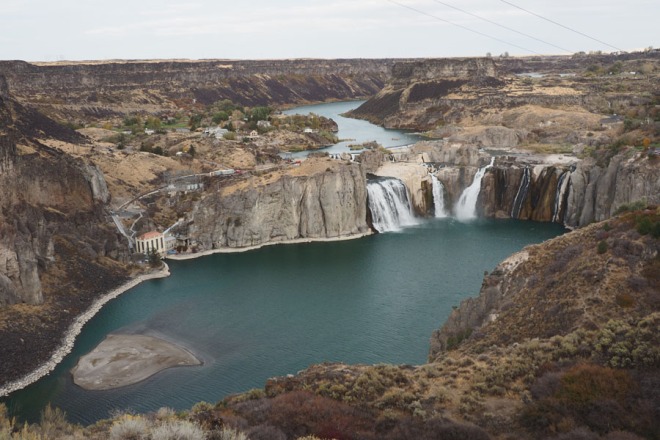 It looked like the trail extended beyond this point, but we did not explore any further.  We had started out the hike from a point just behind the waterfalls themselves.

We did stop at Dierkis Lake after that.  You can make out the faint outline of the lake at the top right hand corner of the picture above.  It is at the level of the top of the canyon.  Imagine the whole area being originally covered by water, and a river cutting out a canyon after the level of the water dropped, and water left behind from the ocean that previously existed in this space collected in a basin beside the canyon, thus forming a lake.  All this would have happened millions of years ago.  You can read about some of the geology of the place at the Wikipedia page for the Snake River.

By the time we got to Dierkis Lake, the late evening sun lit up the lake in a unique manner.  It turned out to be a small body of water.  Very few people were around. 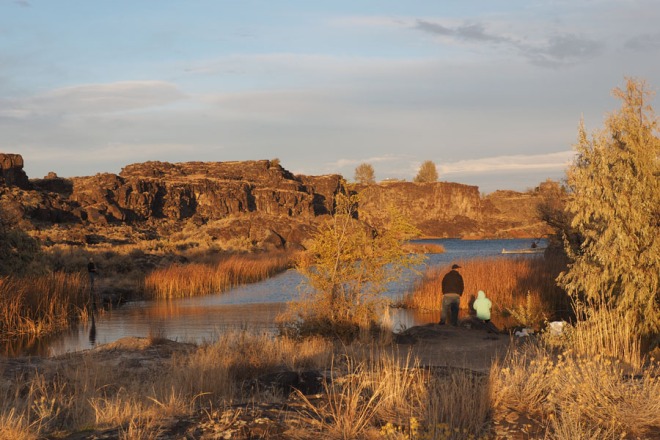 Our stop for the night was on the highway to Salt Lake City, at a place called Burley, in Idaho.  The town felt like a regular truck stop along the Interstate for travelers, with its chain motels, restaurants, fast food, and gas stations.  There was nothing remarkable about the place.  We stayed at a Best Western motel and had a simple dinner of “comfort food” (with a beverage, of course) at the Perkins restaurant attached to it.

We did a lot of driving the next day on the way to Salt Lake City.  The stop at Antelope Island was a bit of a disappointment.  Perhaps the experience might have been better if we were able to hike one of the more challenging trails.  The easier trails were not very well maintained.  Here is a picture taken from the park of Salt Lake City in the shadow of the Wasatch Mountains. I thought might be worth sharing.

We got to Salt Lake City that evening.

The sights that are in Salt Lake City itself can easily be covered on foot since it is a small place.  Our hotel was also close to downtown.

We spent the next day walking around the city.  Here are some more pictures from Temple Square, the area where the buildings of the Church of Jesus Christ of Latter-day Saints (the Mormons) is located.  The building in the picture below is the chapel.  The wall represents the border of Temple Square itself. 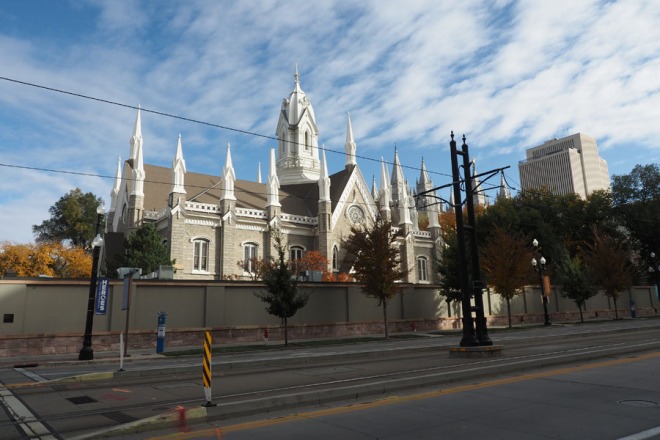 The following picture was taken outside the Tabernacle.  We were waiting for a performance. 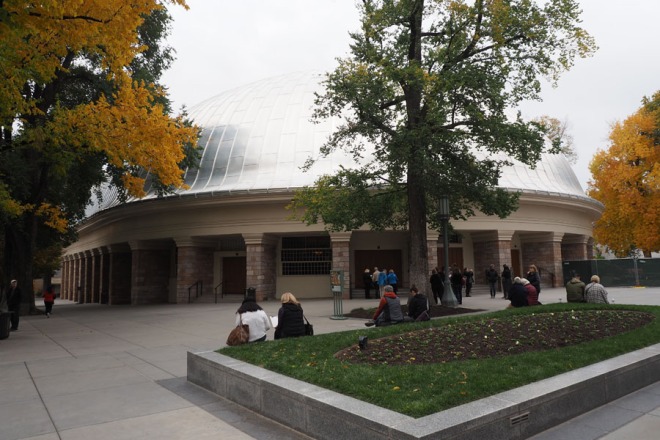 The tabernacle building has fantastic acoustics inside.  We could hear a piece of paper being shredded on the stage from far back in the room without any electronic amplification. 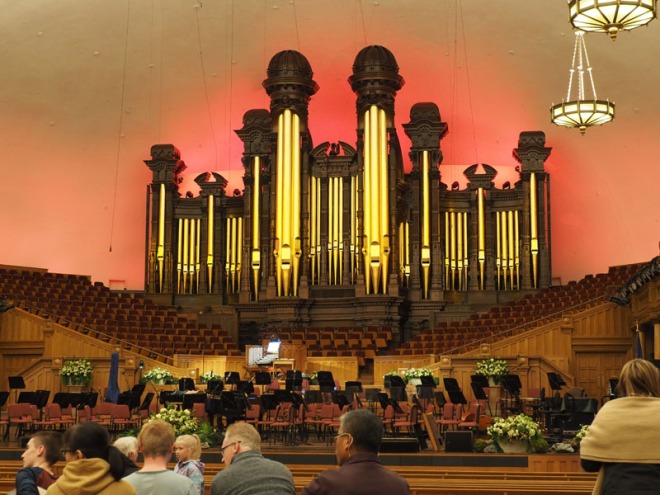 This is a picture of the famous Mormon temple of Salt Lake City.  It is the only space in the area of Temple Square considered sacred and not accessible to non-believers. 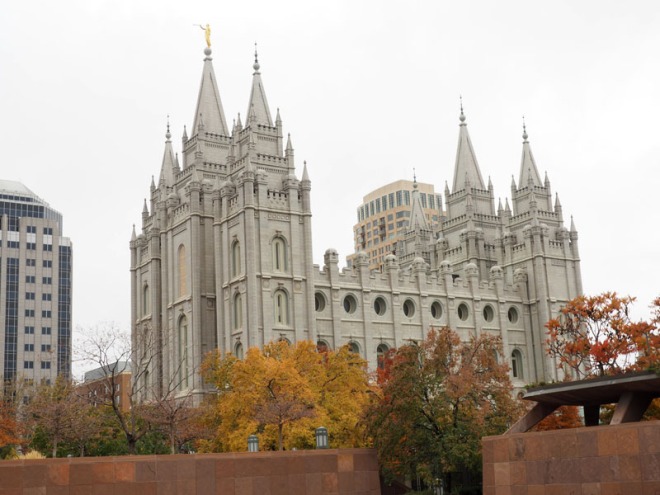 There were many couples getting married in the temple, and you could see some of the marriage parties gathered all around the building. 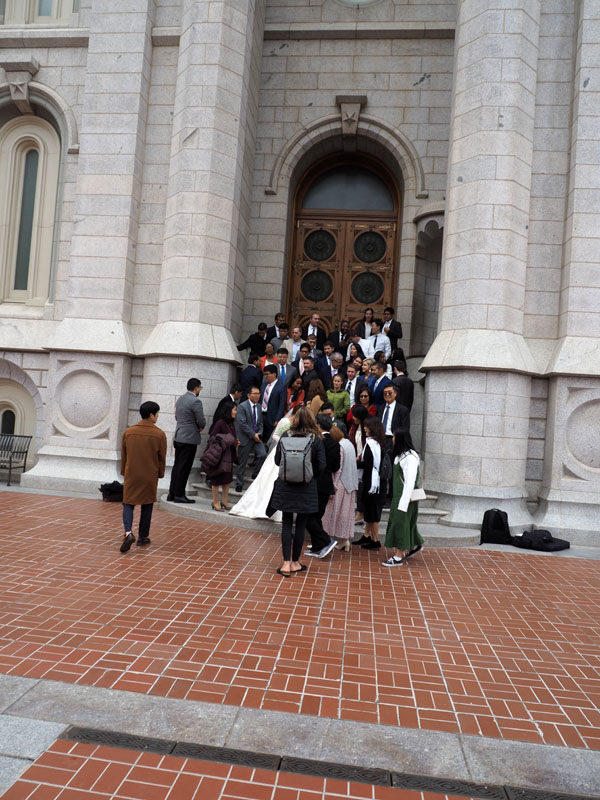 There are a few other buildings around Temple Square belonging to the Mormons, including a huge office building.  It is probably their headquarters.  In general, you get a sense that the Mormon faith does not ask for any level of asceticism in their practices.

Here are some pictures from our visit to the Utah State Capitol.  The following pictures were taken on the grounds of the facility.  You can see the Wasatch Mountains in the background.  To the right of the picture below is a memorial to Mormon pioneer volunteers who joined the U.S. Army during the Mexican War.

The picture below is taken from the entrance to the Capitol building.  (The entrance is actually to the side of the building rather than its front.)  The spire of the old City Hall appears on the right side in the picture below.

This is the rotunda of the building itself. 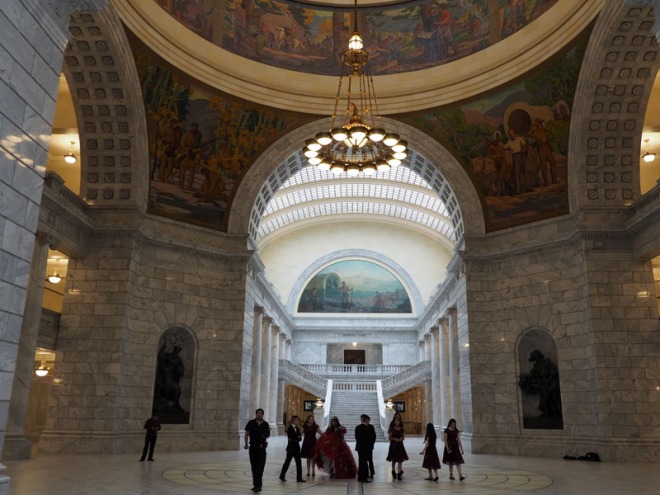 The steps in the picture below lead to the offices of the governing officials, including the governor. 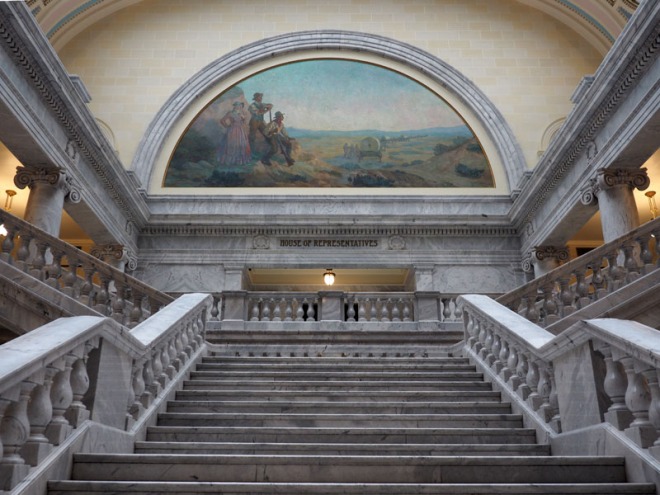 This is a picture of the Capitol building taken as we departed the area. 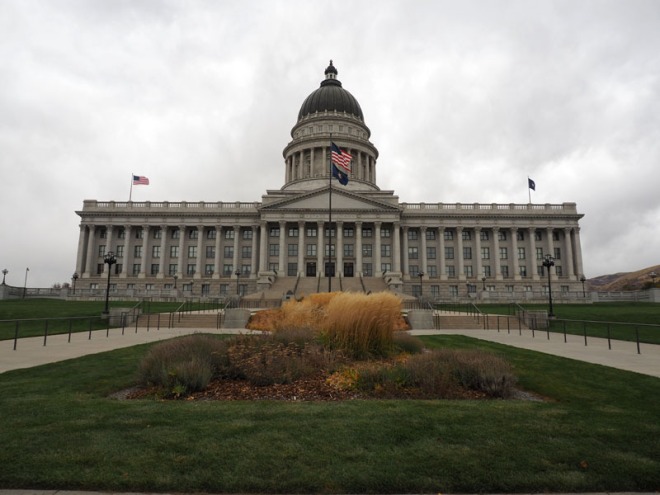 The road from the Capitol building into the downtown area is called State Street. 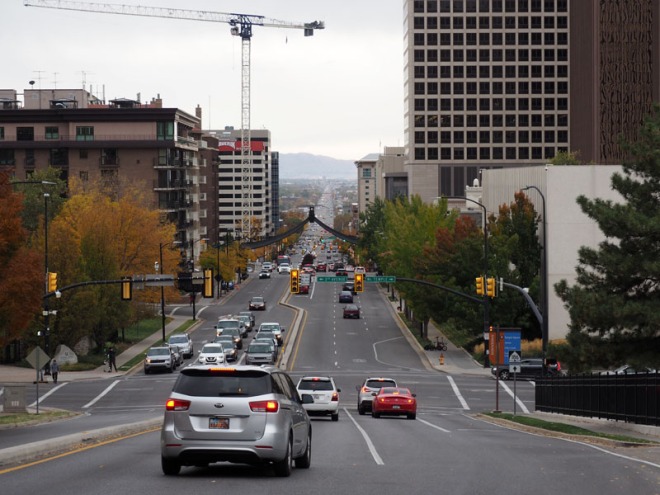 We walked through the City Creek Center shopping center on the way back just because we had read about it.  It looked like any other mall. 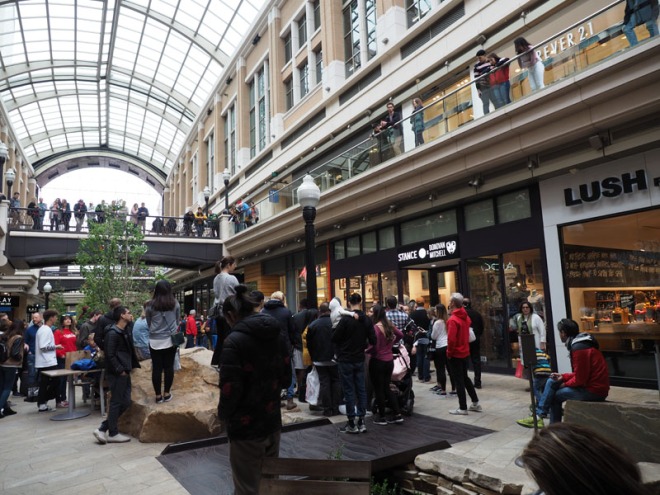 We experienced a moment of minor excitement as were were walking back to the hotel. There was a loud sound behind us as we were walking near the station seen below.  (This was a little while before the train in the picture below arrived at the platform.)  We turned to see an older woman who was on a motorized wheelchair toppled over the rails.  She looked disheveled, and I am guessing that she was indigent.  She had been carrying some metal rods on the chair, and they had fallen off.  The footrest on her wheelchair had gotten snagged under the rails.  Luckily, a few of us were able to extricate her from the rails before the train arrived.  Traffic continued to flow around us. 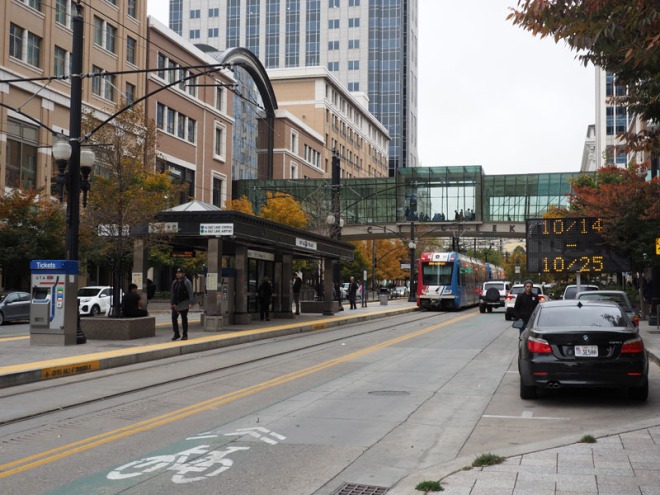 In general, from what I saw, I thought that Salt Lake City seemed to have a more compassionate approach than some other places to dealing with the less well off people who are drawn to the bigger cities.  They did  not seem to be aggressive about chasing people away to make the tourists feel better about themselves.

It turned miserably cold on our last evening of the travels, and it started to rain.  After Mass at the Cathedral of the Madeline, 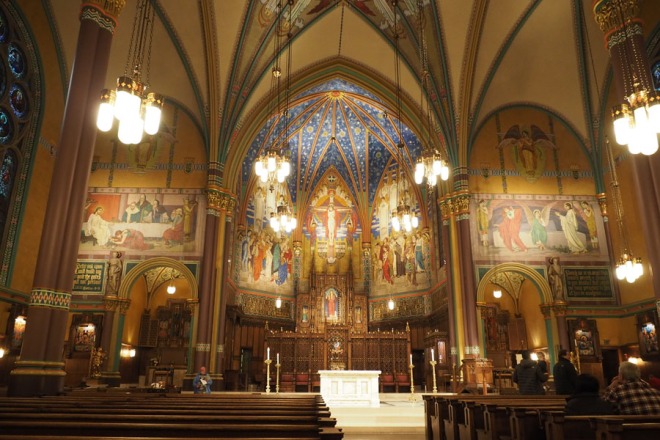 we went to dinner at a sushi place. After that, we topped off the gas tank in our rental car.  We had an early morning flight the next day, and there was a threat of early morning snow that could impact our ability to get things done in time and leave town in the morning.  I could feel the cold right down to my bones standing out it the cold at the gas station on a windy night, and was happy to get back to a warm room in the hotel!

Fortunately, the snow held off that night, and we were able to make it to the airport on time without a hassle.  The airport was crowded for that time of the morning.  We had an uneventful flight back home on a aircraft that was packed with travelers.

And that is how this story ends….

One thought on “The 2019 Road Trip: The Final Chapter”