It is a strange process of the mind that has gotten me to post this particular blog.  I actually started out wanting to bring Christina’s blog from her Peace Corps days back to life (at least temporarily).  The final blog, before she leaves Guinea, is a classic.  But, then, I thought that the circumstances of my referral to that blog in my original e-mail in 2014 were also interesting enough.  I post my original e-mail in full.  I do this in spite of the fact that we are heading into the season of Winter at this time, and not Summer.  In fact, the temperature outside right now is about 20°F.

**********************
It rained cats and dogs, and squirrels and gerbils, last Thursday.  The wind rattled the blinds of the open window in the bedroom waking me up in the middle of the night from my solitary slumber.  Teresa is in Bangalore with her dad, Angela is in school taking her final exams, and Christina is wandering around the country, taking a break after returning from her Peace Corps adventures. The wind blew hard enough that night that I had to get out of bed to close the open windows. A little bit of water even got into the bathroom through a skylight that was apparently not sealed adequately on the roof.  Our region also experienced a significant amount of flooding and road closures in the aftermath of the storm.  We have been seeing an unusual number of similar storms this Spring.  Is it the impact of global warming?

Since I was alone at home, I decided to head out as far west as I could this Sunday morning in order to extend my coverage of the 184.5 mile C&O canal trail.  Two weeks ago I had started my run at the Cohill Station traiI access point at near mile 130.  Today I started my run from the end of the WMRT at Pearre, MD, near mile 136.  I  managed to get all the way to mile 139 today.  Some day I will get to the end of this trail.  (KJ note – I did get to the end of the trail finally in 2016.)

Very few people live in this part of Maryland these days. The ridges of the Appalachian mountains run north to south, and in these parts they provide natural barriers that cause the Potomac to turn left at the Cacapon mountain and actually flow north for a few miles before the river turns east and south again to head towards the waters of the Chesapeake Bay.   Further to the west lie the Paw Paw bends of the river that cause the it to meander in S-shapes through the hills. I wondered about the processes that caused this section of the river to actually be created.  Was the Potomac formed because of erosion by glaciers during an ice age?  As you make your way to the trailheads on roads off of Interstate 68, you will find yourself traveling along the valley or the crest of the little known Tonoloway ridge . You see abandoned homes along the road.  When you get to your destination, you also notice the many abandoned trailer homes beside the trail.  I wonder if this used to be a poorer part of Maryland.  How did people survive?  Did their source of living vanish due due to changing times?

Three weeks ago one could make out the new leaves of Spring on the trees along the trail.  Today the area looked lush and green.  Change can happen quite quickly! 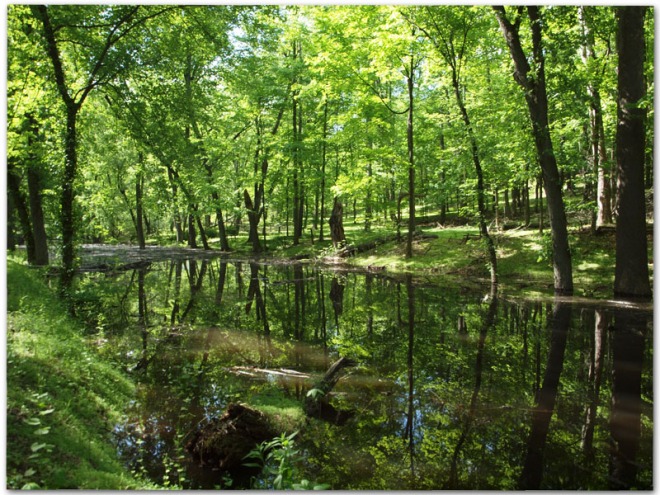 But the thing that caught my particular attention was the high level of water in the river and the nature of its swift flow.  When there is flooding, the initial impacts are usually felt in the local streams and creeks, but all of this water eventually flows into the rivers, and the river can actually crest a few days later, after the storms have long gone by.  The Potomac only crested in certain sections on Saturday, the day before my run.  The river looked browner than usual.  Imagine the massive quantity of mud that was being swept down the river because of erosion in our backyards, the mud that was causing it to look different.   There is no way to reclaim this sediment and to reverse the process.  Material that was in a certain location at one time is gone forever from that location.  This change is irreversible.  It reminds me that we human beings have difficulty adjusting to change, while in the grand scheme of things irreversible change is inevitable.   To what extent does it make sense to put up a fight?   No other species has done as much as humans to put up a fight, and with knowledge and technology we have brought tremendous sophistication to this endeavor, and quite often we do not care about the secondary consequences.  When does it make sense to accept nature’s reality gracefully without trying to fight it?

The solitude of the trail (and perhaps even the quiet of the empty home) actually soothes the mind.  Such conditions provide moments of clarity that would otherwise not be possible with the constant interactions and distractions of daily life.  The trail is perhaps one of the very few circumstances when I am capable of trying to ponder if there is a bigger picture considering how inconsequential our existence is on the grand scale of things.  The trail provides perspective.  You are aware that everything else that is going on around you is for the most part independent of the human factor.  The world can actually exist without us humans.   Why do some of us think there is an overall purpose that is to benefit our species to the detriment of others?  Why does it seem that the progress of human society appears to be a process of positive feedback that is leading to increasing inequality in almost all dimensions, while the ultimate result is inevitable?  What does a human really need beyond food, clothing and shelter, and what happens when you get beyond that? All things considered, what should I be trying to do?  Should I even spend my time thinking about things like this?  You might actually get some answers that work for you under the right conditions.

So, what about Cohill Station?  It used to be a real railroad station on the Western Maryland Railroad in the old days when the population in this part of Maryland used to be more significant.  Nothing remains at the former site of the station.  Dust to dust!  I wonder how things were for people who used to live along the river, especially when it ran brown.