It was later in the evening by traditional Chennai standards.  I had just finished meeting up with some close high school friends whom I try to reconnect with whenever I visit.  I always make the effort to do so these days when I come to Chennai.  Much water has flowed under the bridge since the days of our youth, and these are the remaining opportunities to reminisce, and to also catch up on the stories of our own lives.

The place where we met that evening was a somewhat upscale hotel in town, a place where one would tend to see people who are generally better off than the people on the street.  For me, it really did not matter where we met.  I would have gone with whatever place the others were comfortable with.  We spent a nice evening catching up. 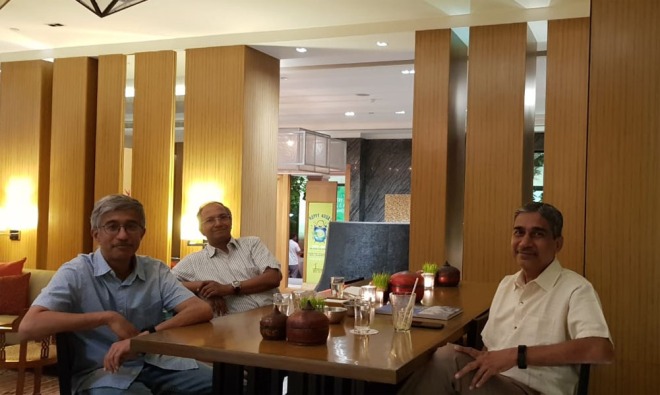 Soon it was time for me to return to Madipakkam.  I could not delay too long.  Madipakkam is located on the outskirts of town, and it is a place that could be considered somewhat remote from the city itself.  Finding a ride could become more and more difficult later in the night.  Because of this, I had been keeping an eye on the time through our get-together.

I have become very familiar with using the Uber car service to get around town when I am in Chennai.  The request went out on the Internet for a ride to Madipakkam. I was quickly assigned a ride to get me there.  My friends and I walked down to the street and waited for a driver with the name Joseph to show up with his vehicle.

It did not take too long for Joseph to arrive.  I said my last goodbye and hopped into the car.  I was on my way to Madipakkam.  Joseph started talking to me soon after the ride began.  It could have been something to do with the fact that we shared a common name that loosened the tongue.   Also, unlike most of the drivers that I encounter during these rides, he spoke English, which made it easy for me to follow him.  It was a sad tale that emerged.

He first asked me if I was paying by cash or by credit card.  He seemed quite relieved when I told him that I was paying cash.  (I had heard from another driver that Uber reimbursed the drivers for credit card payments only once a week.)

He asked me if I knew of any job opportunities.  I told him I was just visiting.

The rest of his story emerged.  Joseph informed me that he had hit rock bottom in his life.  He was a college educated professional who had, at that point, been out of a job for a couple of years. He had just started driving for Uber.  He had no money, and was desperate.  He was driving his friend’s vehicle for a living, and had made some sort of an arrangement with him that involved his actually handing over some of the money he was making as a Uber driver back to his friend.

Joseph was originally from a place outside of Chennai.  He had done his college studies in Chennai, receiving a professional degree at its conclusion. He had worked in the industry on non-IT backend systems.  He had worked for a few firms.  And then he had lost his job.  He had been looking for jobs for a while, but the companies were only interested in hiring new graduates and paying them less than they would have to pay a person of his experience.  His friends had also not be able to help him find a job.

As we drove through Adayar, and then on through the now almost empty streets of Taramani, further details of his life emerged without my prompting.   He was looking for a person to pour out all his troubles to.  All I could do was lend a sympathetic ear.  There was no concrete advice or suggestions that I thought I could offer.

He was married, but his wife had left him to go back to her father’s place.  His mother had actually left him a house, but his father-in-law had needed some money, and he had taken a loan out on the house to help out the father-in-law. Since his lost his job, the father-in-law was now insisting that he pay off the loan before his wife returned to him.  When he had been working, and had money, he had not saved much of it, using whatever he earned to buy his wife whatever she desired. He made the dramatic statement that he had found out the hard way that money is everything, and that love meant nothing.

I had no reason to disbelieve what he was telling me.  He certainly sounded very  sincere.  He sounded downbeat.  But, at the same time, I felt that he had been a little naive to be taken for a ride in the manner he was describing.

He said that his mother had passed away a year back.  He had no other family, and he was all alone.

There was more silence in the car towards the end of the ride.  I did not know how to respond to the story, and changing the topic to something else in light of everything I had heard seemed a little trite and insensitive.  I was no good in this situation.  At the end of the ride, on an empty Madipakkam street, all I could offer was some encouragement.  I told him not to let people push him around, and to take what was his.  As I closed the gate to the compound of our home behind me, I saw that he was still seated in the car – under a streetlight, looking at something in front of him.  Perhaps, he was counting his take for the day.

There were two very different reactions when I related this story to two of my friends the next day.

One of them asked me if the person had asked for some money at the end.   He mentioned that it was not uncommon for people who, when they met up with others who they thought were better off than them, hit them up for some cash, even if they were strangers.  People called it a request for a loan, but most had no intention of making any repayment.

My other friend was more sympathetic.  He said that the situations that I had heard about were not that unusual.  This kind of stuff happens to many people.  I said that some of this sounded like it was straight out of a soap opera.  He responded that the difference between this story and a soap opera was that you could turn off the soap opera any time you wanted.  My friend’s conclusion was that there was really no fairness in the world.  Some of us just happen to be better off because we are more fortunate in life.  Now, ain’t that the truth!