The first time I came to Williamsport was in 2006. It was a time when I was extending my travels along the canal further and further away from home. The last time I visited was during the bike ride in 2016, on the penultimate day of the ride. We stopped here for lunch. And then there was the visit last Sunday, on Father’s Day.

I woke up that morning thinking to myself that I wanted to explore some new place along the canal that day. With an early start, we could be back home at a reasonable time. The initial response was one of concern – this was going to be a busy day already because of phone calls that were going to take place on account of it being Fathers Day. We went anyway – to Williamsport, MD. We left home very early, and we were on the trail by 8:15am.

As you can see in the photograph that I took during the visit in 2006 (in this link), the aqueduct at Williamsport was in a state of disrepair at one point. One of the walls that used to line the waterway used by the canal boats was missing. That particular wall had been made of wood, and it had collapsed in 1920 as a boat was passing over the aqueduct. The boat fell into the creek. They managed to separate the mules pulling the boat from the boat itself in time to save them.

The reconstruction of the aqueduct was completed in 2019, and we saw the results for the first time on Sunday. This is how it looks from the parking lot that we used. 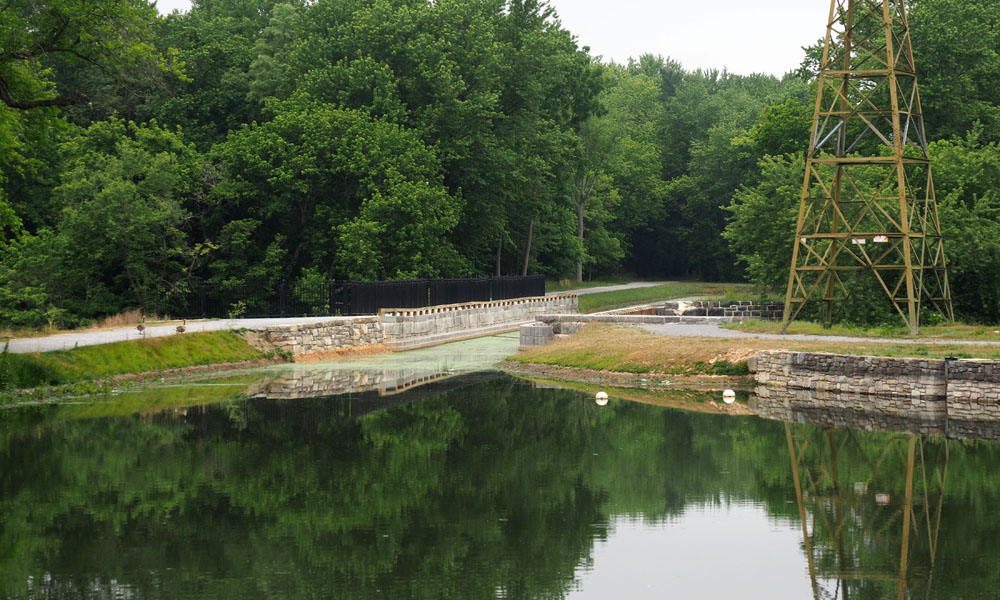 The canal used to be watered all the way up to the aqueduct, but not over it. There was an earthen wall across the canal bed just before the aqueduct that held back the water from the aqueduct itself. The canal is now watered over the aqueduct also, to a point beyond it. They now have boats for tourists that can take you on the canal over the aqueduct (although it looked like they had not yet brought the boats out this year). It used to be that you could cross over from the parking lot to the towpath just next to the aqueduct. That has changed. The National Park Service has now fixed the railroad lift bridge that exists close by to provide access instead. The bridge can now move up and down. It has been lifted and set to the upper position (semi-permanently, it seems). You can cross the canal using this bridge, while the boats for tourists can go under it. 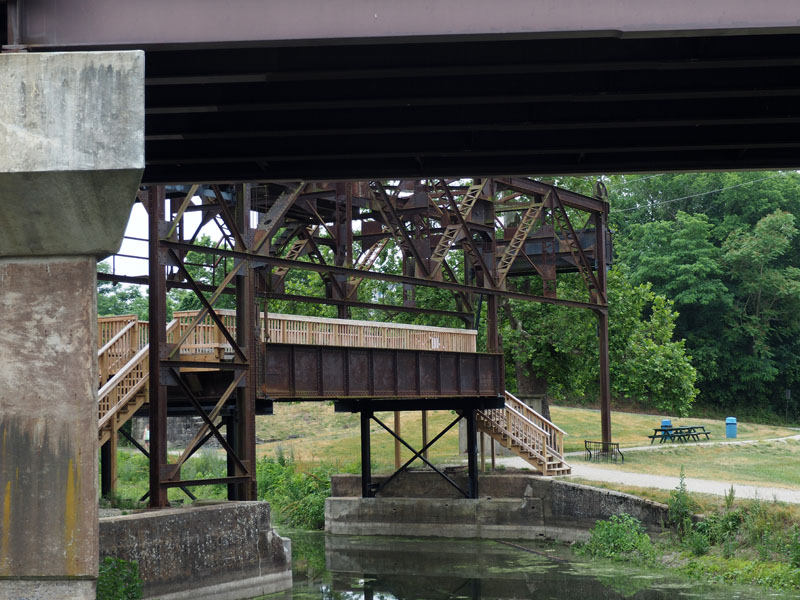 (The bridge used to be stuck in its lower position in the past as you can see in this picture.)

The watered section of the canal is lined with wild flowers this time of year, including chicory, 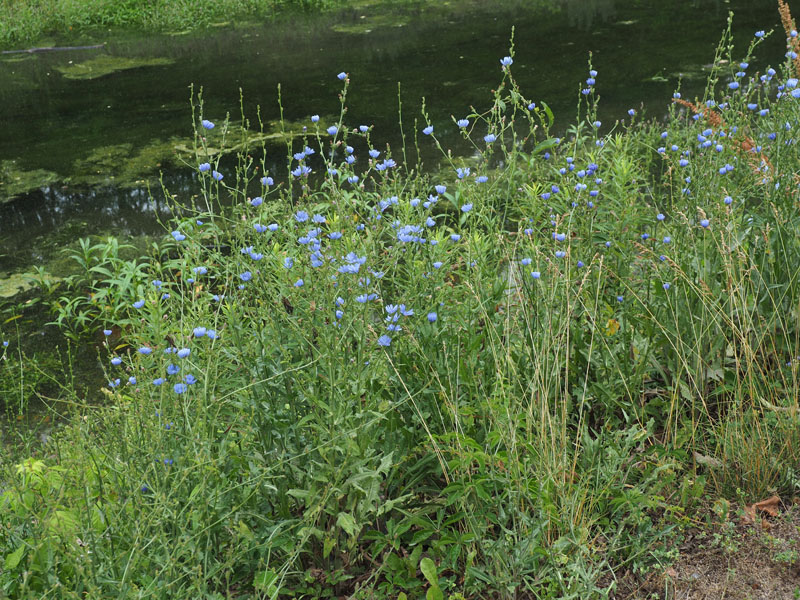 There are also plenty of small birds flying around in this section. To the right of this section of the towpath is the power plant at Williamsport. I did not take a picture this time, but here is a picture from the past.

Within a short distance, we passed Lock 44 with its lock house. 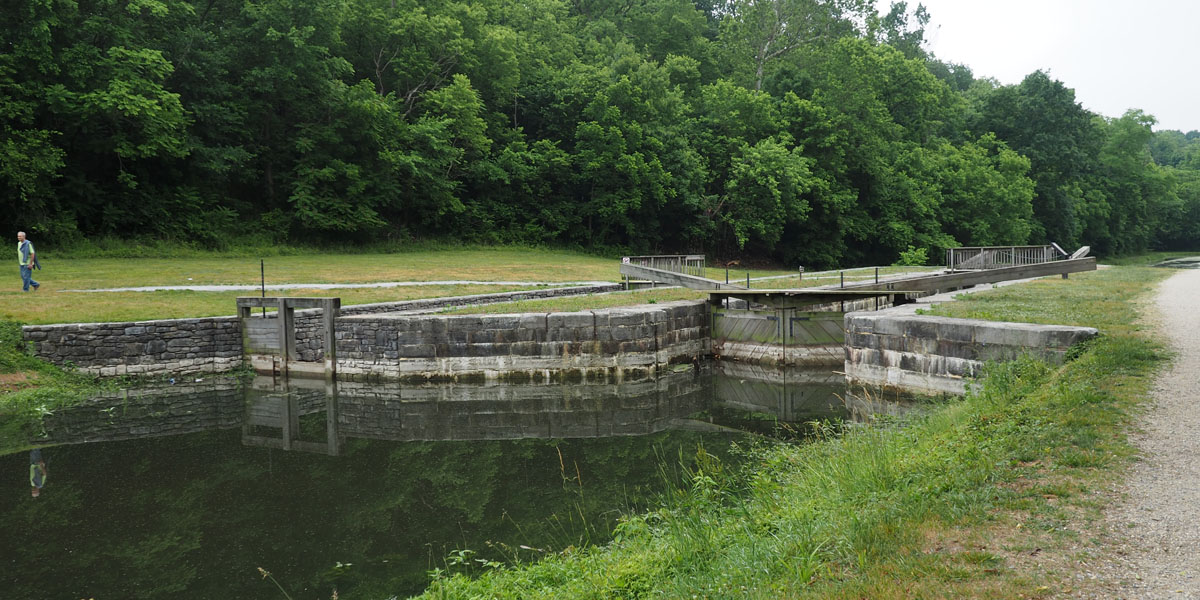 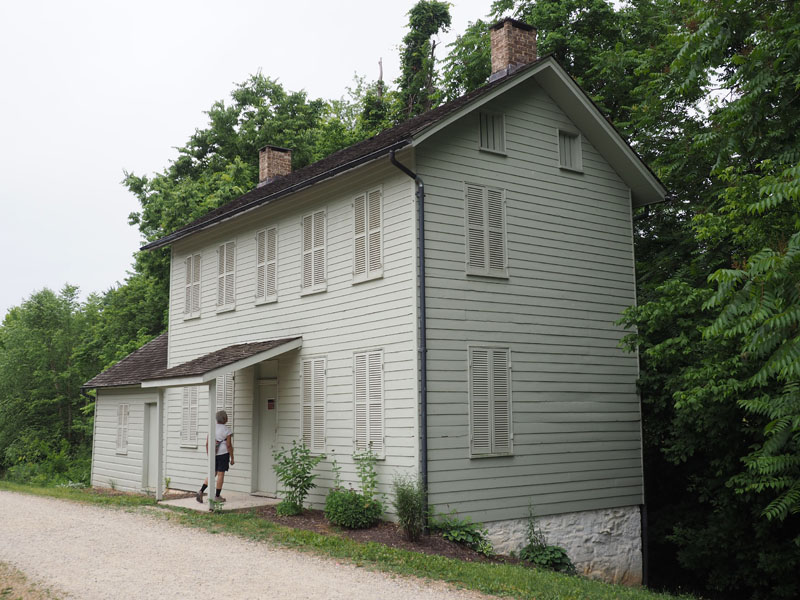 I remember being able to go into this lock house when I made a visit a long time ago.

You enter the woods soon after passing the lock.

The watered section of the canal also ends where the woods begin, near the gate seen in the picture above. The next landmark on the trail is the bridge for the highway Interstate 81 over the Potomac river. There is construction work underway on the highway as they increase the number of lanes on the bridge. The towpath is protected by a cover during this time.

Further along the trail, you pass a railroad bridge over the river that is still being used for freight traffic,

and soon after that you see the remains of another bridge that used to exist in the past. Today, all you see of the second bridge are the remains of the piers running from one side of the Potomac river to the other.

This part of the trail has a different feel from the sections that we usually go to. The woods feel deeper. It could be so because the area is lightly populated compared to the places closer to Washington, DC. The trail is also very wide, and in good shape. 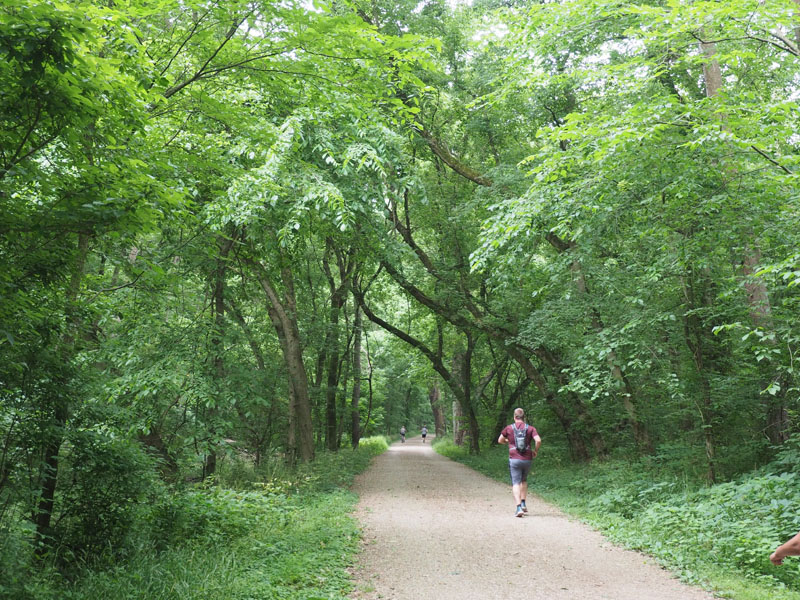 On our way back, we crossed over the Conococheague Creek Aqueduct and continued our walk for a short distance to the other side of the creek. We proceeded to mile 100 of the towpath. 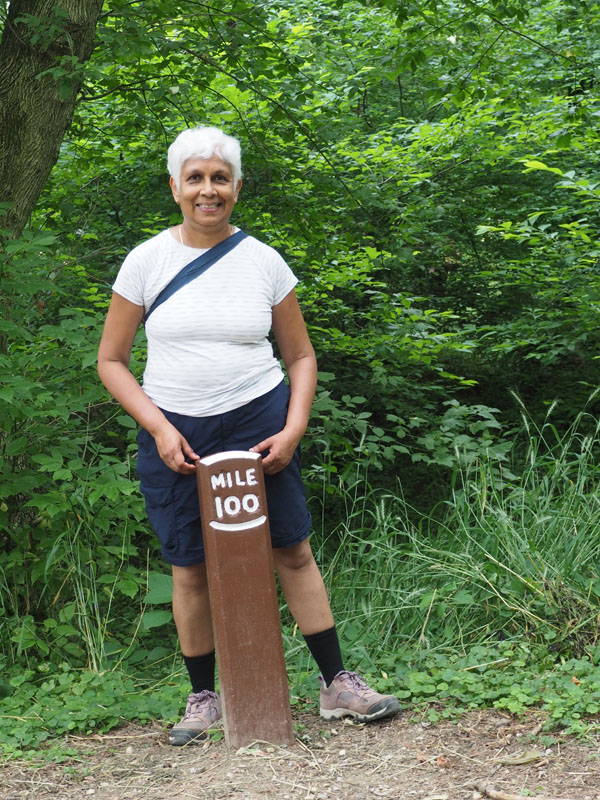 We walked a little further on the towpath, and then started to make our way back to the parking lot.

The picture below was taken from the aqueduct on our way back.

You can see where the Conococheague creek and the Potomac river meet, and, if you expand the picture, you can see the difference in the color of the water of the river and the creek. The river was very muddy because of recent rains. The bridge in the picture carries US Route 11 across the Potomac river between Maryland and West Virginia.

This is a picture of Cushwa Basin at Williamsport taken from the trail. The parking lot that provided the closest access to the trail used to be on the left side of the picture. The closest access today is now from the parking lot on the right side of this picture. That parking area is new. The buildings in the picture are a part of the C&O Canal National Park. The building on the right is a museum. It was not open when we visited. The National Park Service is building a new park headquarters in Williamsport at this time.

This is a picture of the Cushwa Basin during the days when it was operational. The basin had place for boats to load and unload without impeding canal traffic. It also allowed boats to turn around.

After returning to the car, we drove over to the parking lot that was closer to the aqueduct itself so that I could examine it more closely. It has an interesting look to it.

The newly reconstructed side of the aqueduct is actually made of concrete, and it is painted on its inner side to look like wood.

I suspect that the wooden supports on the outer side of the wall are just for show.

Here is a clearer view of the inner section of the aqueduct. 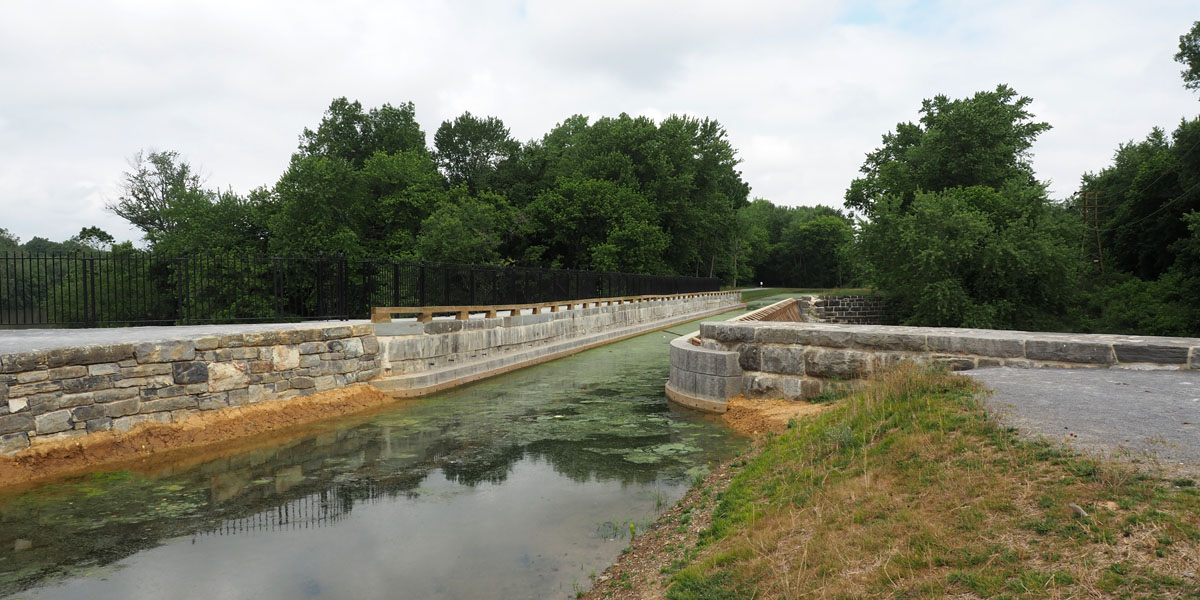 This was the last picture for the day!

Since we had started the walk early, we also finished it quite early in the morning. We still had a long drive to get back home. But we still got back well before noon.

The day turned out to be tiring – as predicted! We actually spent three hours talking to the kids! This was followed by another session talking to some of our friends. For some reason, I had a craving for food from Checkers that evening. (Yeah, my cravings do not necessarily lean towards fine dining!) We drove over to the local franchise after the last chat session and picked up some sandwiches to bring home. They had a sale – two sandwiches for four dollars! It was the cheapest father’s day treat. We watched some TV and went to bed early, quite exhausted. Enjoyed the day!

One thought on “Williamsport, MD, On Father’s Day”