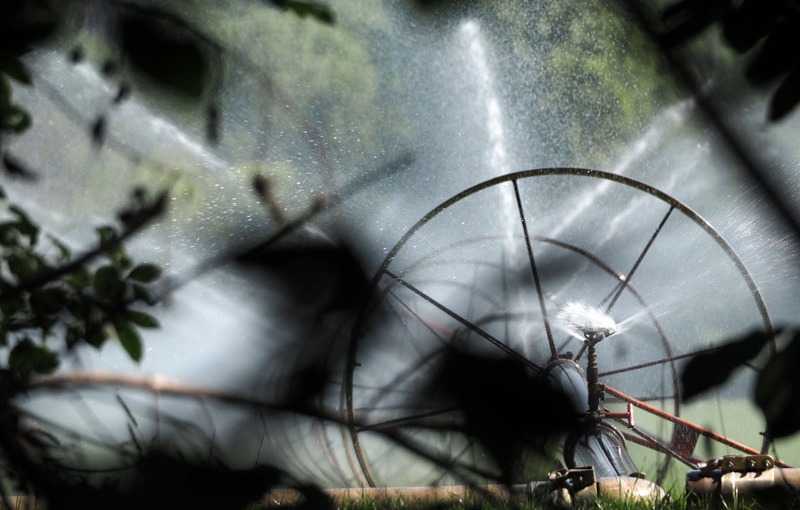 We began to hear the sounds shortly after we set out on the trail, as we headed north from Sycamore Landing. It was coming from the large farm just next to the berm of the canal. It was a sod farm (whose entrance on River Road one passes if you were to drive on towards Edwards Ferry). As we got closer, we noticed that a massive sprinkler system was in operation, watering a wide swath of the farmland. A massive contraption on wheels lay across the field with the sprinklers connected to its framework.

Further along the trail, shortly after the sounds of the sprinkler system began to fade away behind us, we began to hear a steady and repetitive mechanical sound coming from somewhere beyond the berm of the canal. We were approaching some kind of an engine/motor operating on the farm. It sounded like one of those old tractors. What we were hearing turned out to be a water pump. I also noticed that there was a culvert under the canal at that location. The light bulb went off in my head! The farm was probably drawing water from the river through the culvert, and using the pump to drive the water to the sprinklers. I noticed a little trail leading off from the towpath towards the river just beyond the culvert. I resolved to check out this trail later, to look for a water pipe, on our way back.

We continued our walk towards Edwards Ferry, continuing our explorations and adventures.

We were now heading back towards Sycamore Landing. We had reached the sod farm that we had passed on our way out. I was now listening for the sound of the water pump. We began to hear it in the distance. As we approached the site of the culvert, we were surprised to hear a cock crowing in the woods next to the river. Cock-a-doodle-doo!! It was unexpected. I was quite sure there were no domestic animals or birds in this section. Not knowing any better, I wondered if this could be a wild turkey.

I took the little side trail just before the culvert where the pump was located and walked down to the river. I then started walking along the riverside towards the culvert itself. The others who were following on the side trail behind me informed me that there was now a rooster following them on the trail. A little alarmed, a went back towards them. Could this blog turn into a tale about the attack of a rabid rooster?!

Yes, indeed, it was a common rooster that had followed us on to the trail. 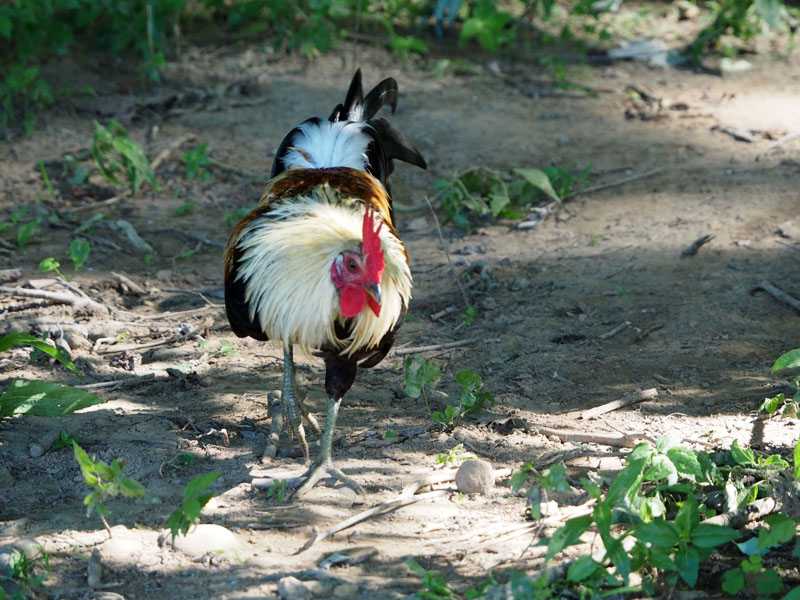 But the colorful specimen, although excited, seemed to be quite harmless. It was not frothing at the beak. It seemed to be following us with some purpose, and fortunately that purpose did not seem to include attacking human beings. I could tell by the look in its eye! Maybe it was expecting some food. 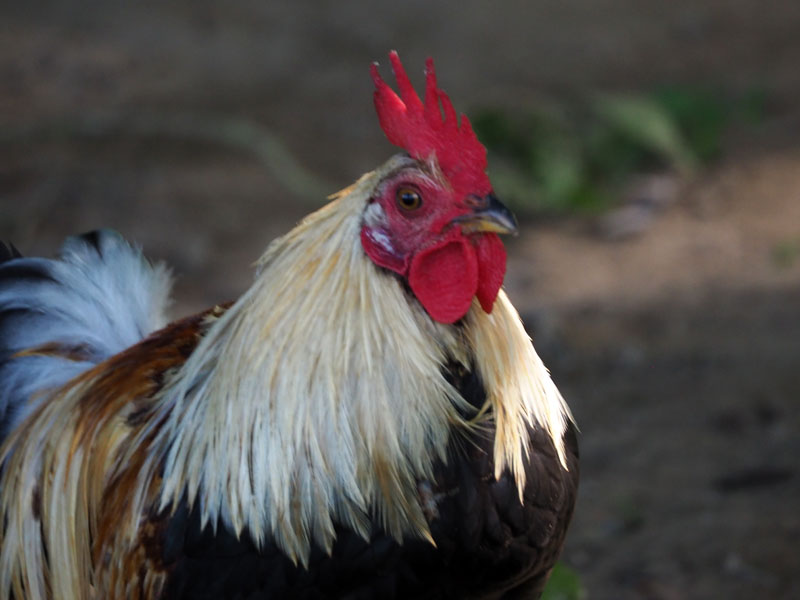 Reassured about its intentions, I went back to the task of looking for the water pipe in the culvert. And indeed, there was a pipe running through the culvert.

Not only that, there also seemed to be a different pipe leading out of the river towards the canal not too far from the pipe running through the culvert.

I was left to wonder about the kinds of permits that were required in these parts to draw water from the river for use on a farm. And that was the extent of my curiosity!

Having gotten my pictures, I walked back to where the others were dealing with the rooster. We thought it had escaped from the farm on the other side of the canal. Convinced that the rooster was not going to attack me, I tried to persuade it back on to the side trail, and then back across the towpath. 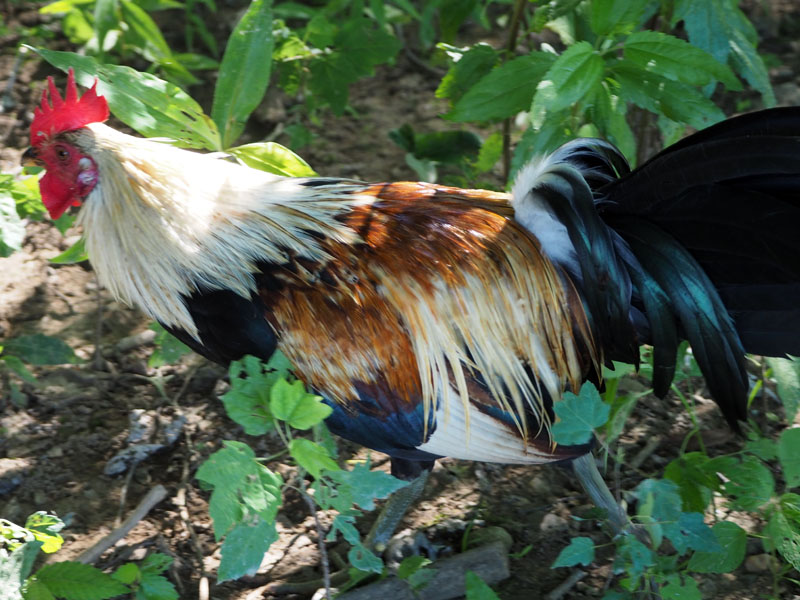 With some effort, and using a certain amount of skill that was newfound (and ultimately useless, may I add!), I managed to get the rooster back to the main trail. I could not have done it without the encouragement of the cheering squad.

But that is how far we got in this remarkable rooster rescue effort. We could not convince the rooster to cross the towpath on to the canal bed. We could not convince the rooster to head towards the farm on the other side of the canal. The rooster viewed my efforts to encourage it to move in that direction with extreme suspicion. Or maybe it thought it was just a game, and was mightily amused. In the end, we had to let it be. It went back into the woods it had just appeared from. 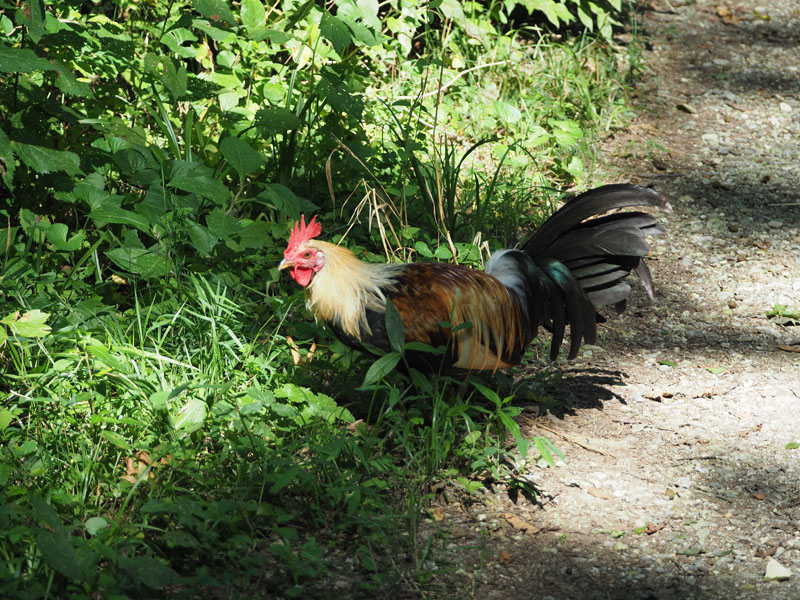 We departed the place having failed in this particular project. We could hear the rooster cock-a-doodle-doing at the next person who happened to pass us by, going in the other direction on a bike. That person did not stop. I suspect that the cock-a-doodle-doing did not even register in the person’s brain. I suspect that there are not many other people who get as distracted as we were by strange goings-on in the woods while they are on the towpath! We left the rooster to whatever fate awaited it in the woods. Meanwhile, I am sure that the farmer is missing at least one of his (or her) roosters. And I wonder if the missing rooster will even be noticed! 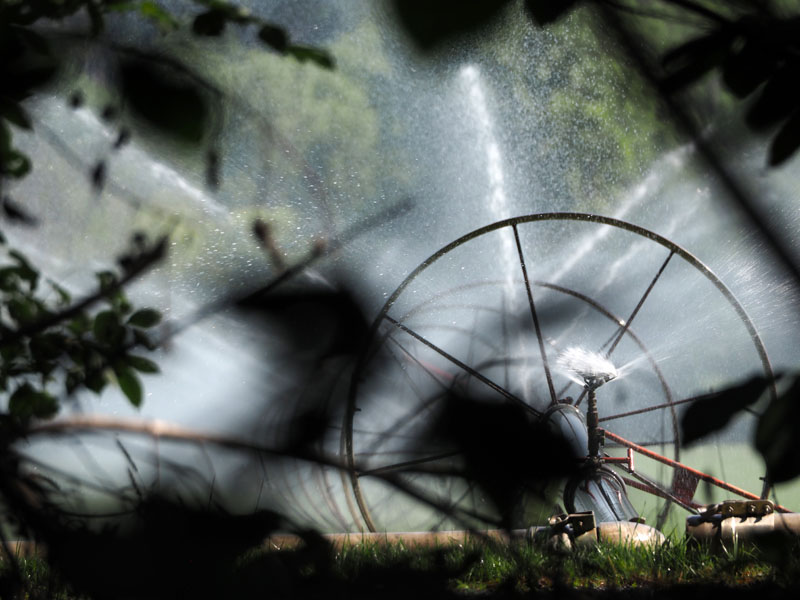