We rarely get a good look at owls on the towpath even though we know that they are around. They are hidden in the trees, and often fly away when they sense our approach. Even if they remain stationary, most of the time they are in a position where you cannot get a clear view of them – either partially hidden behind some branches on a tree, or obscured by the dark foliage. The last time I got a good picture of the barred owl was in 2014.

We came across a pair of barred owls on the towpath last weekend that actually cooperated with us. It is usually very easy to disturb these birds when you pass by. You typically are not aware of their presence until they make a move. But this time, although they had been disturbed, they only moved on to a tree a little further along the trail. I was able to track their flight approximately, and then slowly and quietly walk up to the tree on which they were perched. Fortunately it was close to the trail. What a delightful sight to see – not just one bird, but two of them! 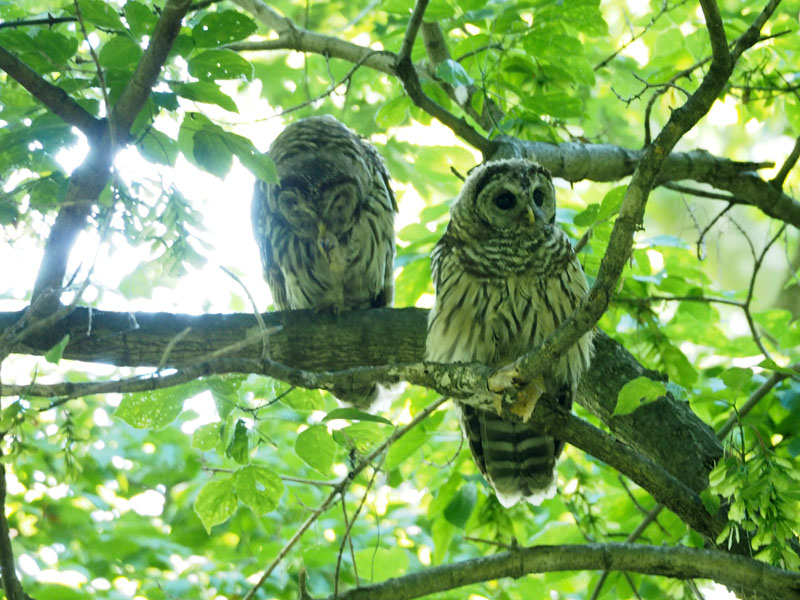 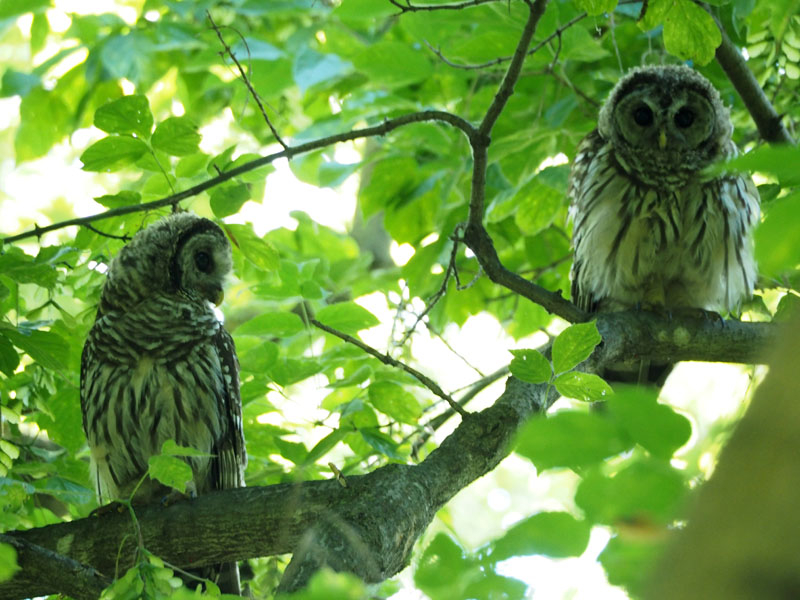 The pictures that I took literally do not present the owls in their best light. The greenery around them has tended to create a greenish tinge for the owls themselves, and I am reluctant to compensate using post-processing. Also, the lighting conditions were not ideal, and my attempt to get a good exposure setting were not the most successful.

Here is a little bit of trivia about owls. Since they cannot move their eyeballs, the only way they can achieve peripheral vision is by turning their heads. A human being can turn its head around only 90° in either direction. An owl can do much better. It can turn its head around 270° in either direction! (This means that if an owl wants to show-off, it can rotate its head 540° from one extreme to the other!) The interesting question to ask it about how the owl achieves this capability. Their vertebrae can manage to support the extreme rotation, and the arteries still function without getting severed. The structure of the neck of an owl happens to be very different from a human’s. There is apparently plenty of spare space within the vertebrae of the owls for the arteries to move in and to be cushioned in. This is not true for humans. Owls also have the ability to pool blood in a reservoir below the head in order to provide a supply when the arteries are twisted. Also, the carotid and vertebral arteries can exchange blood in the worst case when one or the other is blocked. I understand that the features of the owl’s physiology that allows it to move ts head in such a flexible manner are still being studied. Meanwhile, you can find plenty of articles and videos on the subject on the Internet.

One thought on “The Two Barred Owls”