We went looking for the Autumn colors once again last weekend, only to be disappointed – once again! Smart person that I am, we headed up north, thinking that we would have more luck there. But it was not to be. What we observed was a strange mix of trees that seem to have lost most of their leaves, and trees that were still green, with a few trees with hints of different colored leaves mixed in. Different sections along the sides of the road displayed very different characteristics when it came to the Autumn foliage. I got the impression that while the colors may not have peaked in some sections, there was a chance that there could be a direct fade to brown that was going to take place in others. The conversation in the car turned towards making a trip to the Shenandoah Valley, a place that is known for its Fall colors, and spending a little more time there. The problem is that places like that attract a crowd during this season.

But the attitude changed soon after we arrived at Four Locks. (We had previously come here when the kids visited earlier this year.) The thermometer in the car said 38° as we took to the trail. I was bundled up in my typical attire for a cold winter morning – including a cap, two pairs of gloves, and three layers over my chest. I might have overdressed! It did not feel too cold out there. The skies were clear, the sun was out, and there was no wind.

All negative thoughts regarding the failure of the mission to find the colors of Autumn faded away as soon as we got on the towpath. My mood was instantly uplifted! It is an amazing thing that happens to the spirit, and it is difficult to explain and describe. But it is real enough – even though I cannot find the words to describe the exact nature of the change that happens to you. You are simply happy in the moment! A little later during the walk, a woman passed us by on her bicycle, and she had this look on her face that I totally recognized and understood. She was feeling it the same way I was! This was the place to go to to forget about everything else and free up your soul. We encountered quite a few young women on bicycles during this walk, more than we normally do, many carrying material for overnight outdoor stays. And they all had smiles on their faces as they went by. Beautiful Sunday!

As far as the colors were concerned, we primarily saw yellows. We think that a significant contributor to the yellow color are the pawpaw trees that we now realize are plentiful throughout the length of the canal.

It was about 60° by the time we returned to the car, a little before noon. We had worked up a sweat and our outer layer of clothing had come off during the walk. I had to strip down further before we drove home in order to avoid overheating in the car.

Here a some pictures.

There was the early morning mist over the Potomac. This is what we saw from the parking lot at Four Locks when we arrived.

This was the view upstream of Lock 48 in the Four Locks area. We were headed downstream. The lock house for the four locks, and Locks 49 and 50, are also visible in the background. The four locks in this area are numbered from 47 to 50. 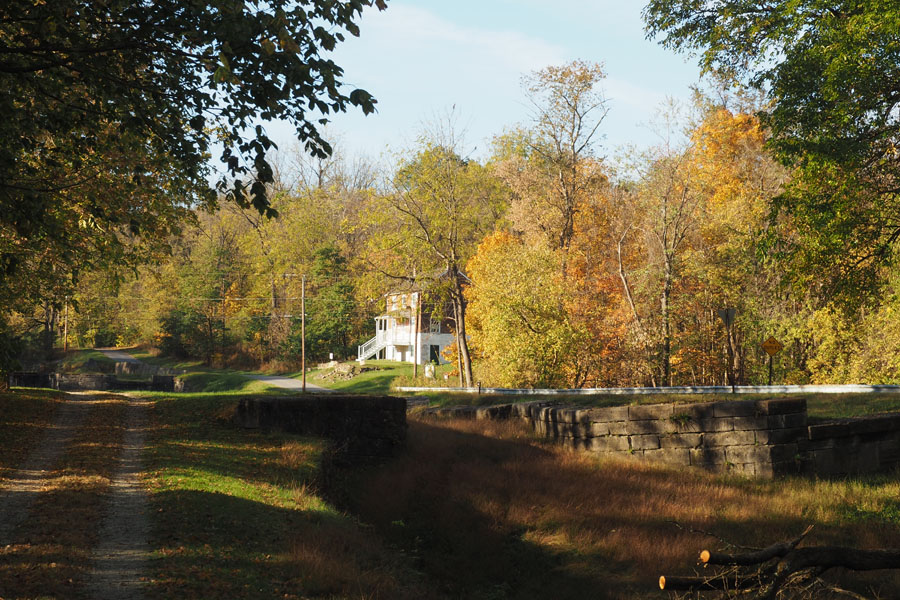 These are views of the trail in the morning sun. 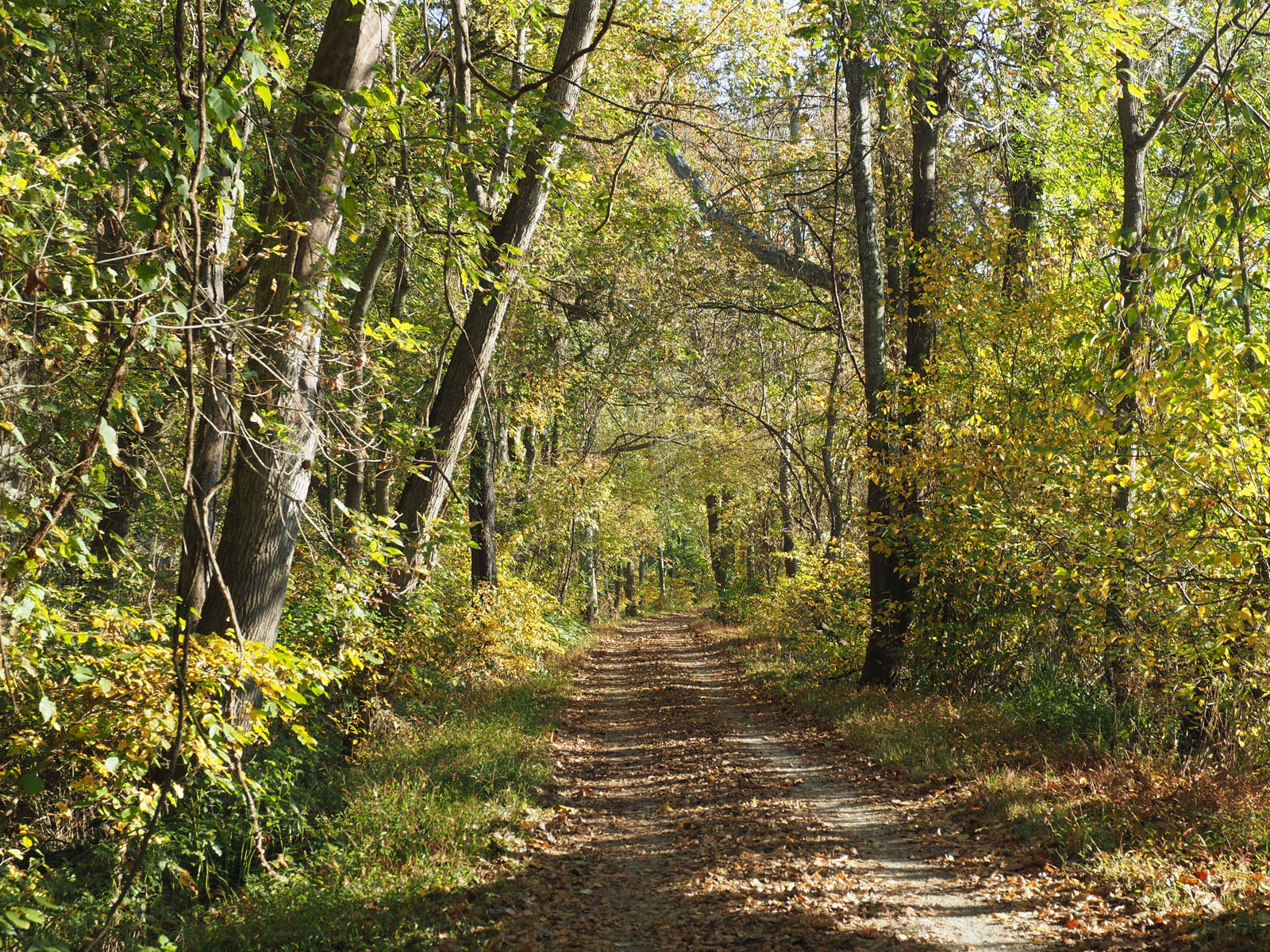 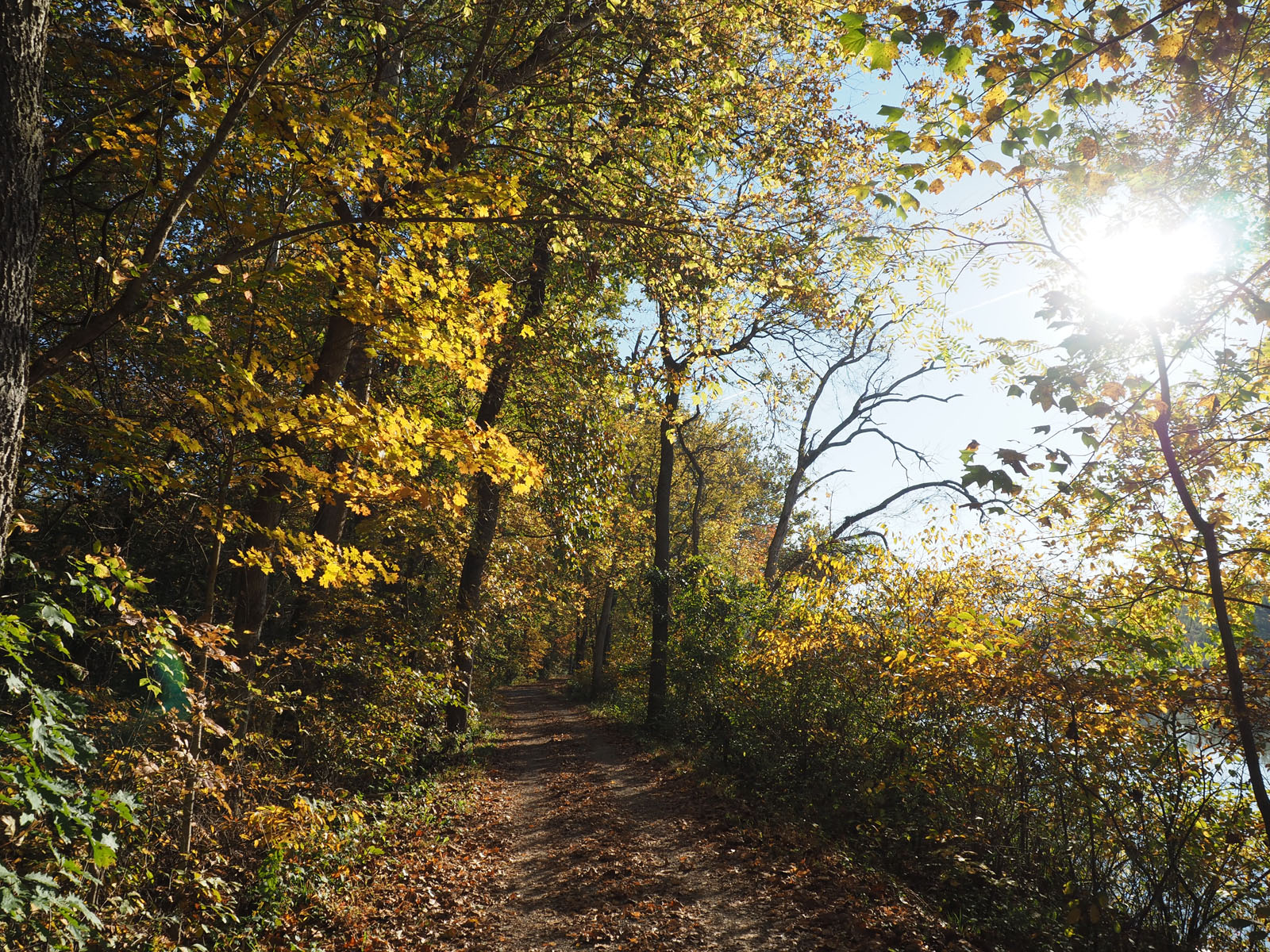 This a view of the Potomac river from the trail as the sun rises.

This is a picture of Lock 46 and its lock house. You can see the remains of the bridge that the mules (that used to pull the canal boats) used – to transition from one side of the canal to the other. From this point onward, until the Lock 45, where the canal temporarily ended at the river, the towpath ran along what is normally the berm side of the canal. The boats were pulled along the side of the river beyond Lock 45.

These are pictures of the river from the section of the trail that runs right beside the river itself. The presence of cliffs like the one that you can see in the picture below made it difficult to build the canal here. 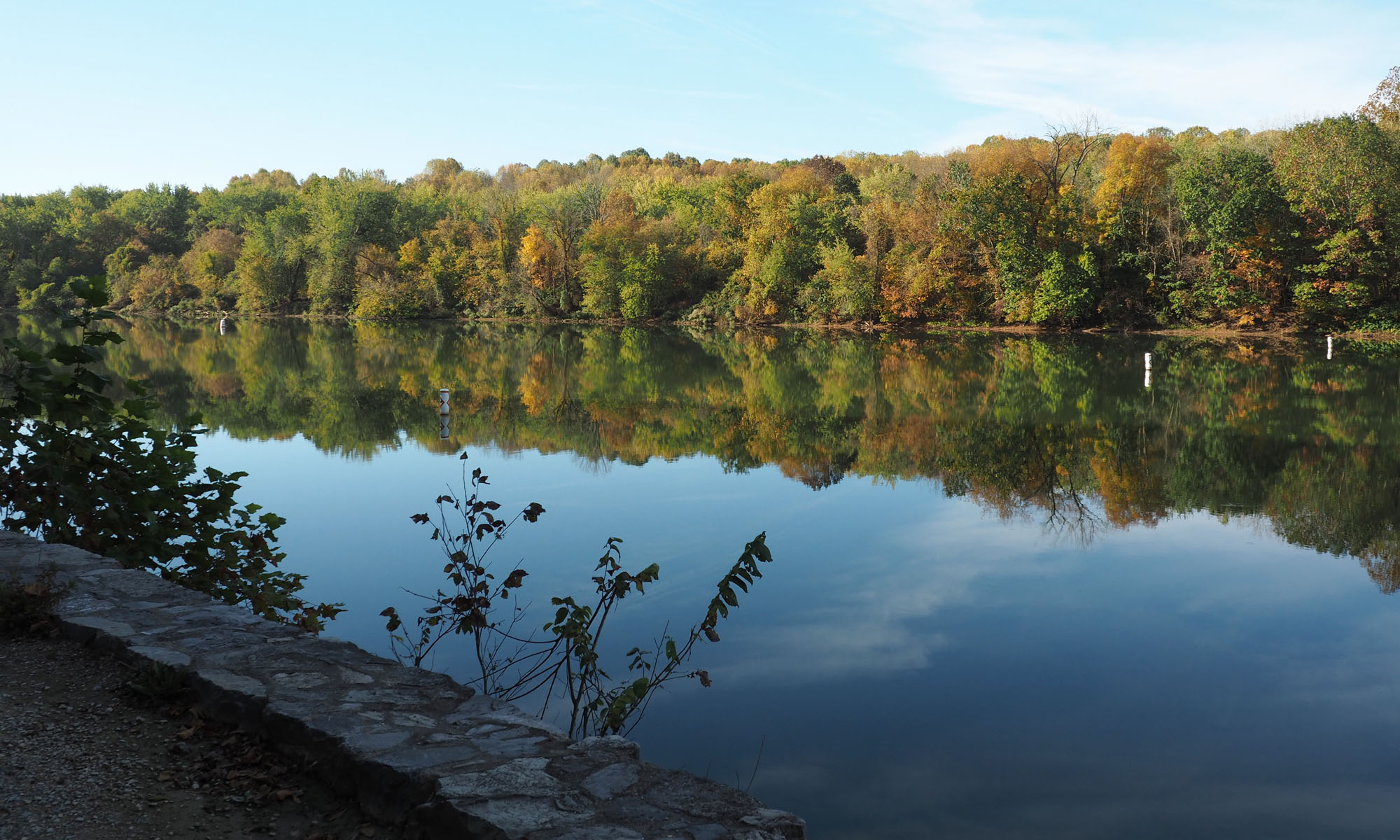 We passed Dam 5 on the Potomac as we headed further downstream. The Inlet lock seen in the picture below allowed boats to transition between the river and the canal once again. You can see the lock house that is present at this location in the second picture, along with the bridge that carries the trail back from beside the river to the original towpath beside the canal.

We explored a little more of the trail beyond Dam 5 before turning back to return to Four Locks.

This is a picture of the Four Locks area taken as were returning. Locks 49 and 50 are visible in the picture.

We did not see too many colors during our walk that morning, but it sure was a beautiful Sunday anyway.