There were a few suggestions being generated for the title of this blog even as we were walking along the towpath last Sunday. I settled on using this one.

The weather turned cold and somewhat nasty over the weekend. There was also the threat of rain. None of this impacted our plans for the weekend walk. One motivation was the fact that the rest of the week had been a disaster with regards to doing any form of exercise. It has been quite hot outside, and there were also the persistent distractions of the mind on a few fronts that affected the motivation in this regard. In fact, the weather had been hot enough during the week that we had to turn on the air-conditioner one day. And now it was cold enough that we had turned on the heat once again.

Thankfully, it did not rain while we were walking. Also, thankfully, the weather is back to normal temperatures for this time of the year once again.

The decision to go to Brunswick, MD, was made even as we were driving towards Point Of Rocks, our originally intended destination for the start of the walk. There was a sudden realization that we had actually visited Point of Rocks quite recently, and we really felt like going to some place new. We indulged ourselves! We changed our destination while en route. Because of this very late decision, the route we took to Brunswick was not one that I would normally have taken. We drove on the more beautiful back roads between Point of Rocks and Brunswick, arguably taking a little more time to get there than we would have done otherwise.

We walked north from Brunswick in the direction of Harpers Ferry. We did not make it to Harpers Ferry, but turned back more than half way there, less than a mile beyond the entrance to the trail at Weverton. Weverton used to be a mill town on the Potomac river. Water power from the river drove its development back in the day. The town was eventually destroyed by flooding from the river. All that is left behind today are the thick woods. You can apparently find the remains of some of the old buildings – a surviving foundation wall or a chimney – if you wander off the main trail. I have made such efforts in the past to find the lost town. This was when I used to run along the towpath by myself. I had no success. I only found this one trashed car during one of my explorations. (The car was most certainly from a time well after the original town’s existence.) We did not make any such attempt to discover the remains of the town during this walk, though we kept peering every now and then into the woods, hoping to get a some glimpse of the remains of foundation stones for buildings – without success!

As we were starting our walk from the parking lot in Brunswick, we came upon a creature that looked like a nutria (or a beaver, I cannot tell the difference!) with its little one. They were just a short distance away from the restroom located next to the parking lot. It held its place, not attempting to get any further away from us humans. 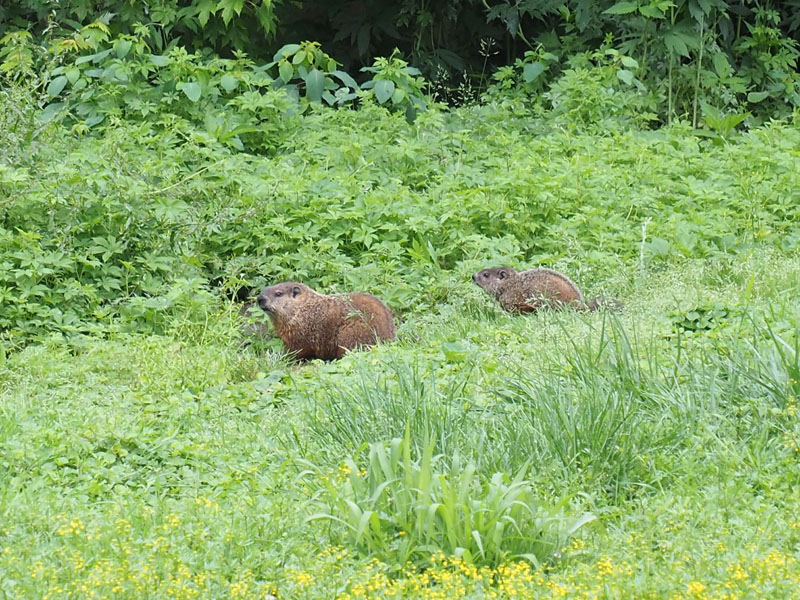 As I walked towards the restroom, another small creature emerged from the ground beside the restroom.

This little one was so engrossed in what it was doing – probably looking for food in the grass – that it did not attempt to get away from me until I was almost on it. I had some fear of being charged by a parent beaver (one could imagine it even being rabid!) that was obviously waiting for its young one, but, thankfully, it stood by calmly. The little one eventually noticed me and ran towards the parent, and the whole family vanished into the tall greenery next to the water. Just FYI, Canada Geese react very differently in situations like these!

Talking about encounters between animals and people, here is another one that took place during the later part of our walk. The deer had been staring at us from a distance while standing on the trail before these bikers appeared.

It was another beautiful walk,

including the subject matter of the title of this blog. The sides of the trail closer to Brunswick had been mowed. These sides were covered all along the way by mock strawberry plants that had fruited.

We saw a plant with a flower that looked like a rose,

and this is other new flower that I also could not identify. 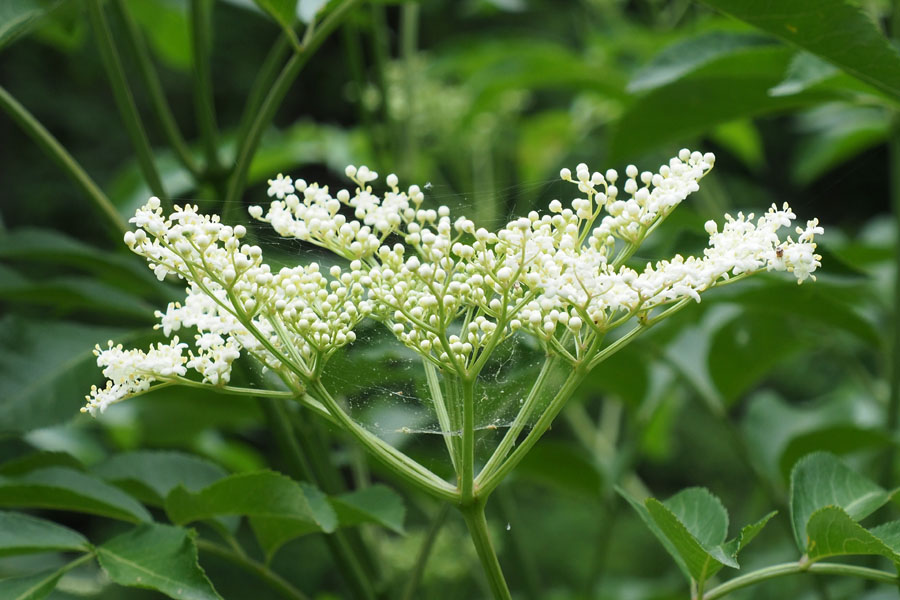 I believe these are blackberries!

We passed Lock 31 and its unique lock house as we approached the entrance to the trail at Weverton.

You can see Weverton Cliff in the background of this picture. We have climbed Weverton Cliff in the past. You get there by getting on the section of the Appalachian Trail (AT) at Weverton going north (in the general direction of Maine). Of note is the fact that the Appalachian trail and the towpath share a common pathway between Weverton and Harpers Ferry. At Harpers Ferry, the AT crosses over into West Virginia on one of the railroad bridges across the Potomac (at the confluence of the Potomac and Shenandoah rivers). From Harpers Ferry onward, the AT heads south in the general direction of Georgia.

There were some interesting signs on the trail at the location in Weverton where the AT diverges from the towpath and heads off north on its own. The white blazes on the brown post in the picture below are the general markings for the AT. You will find these all along the approximately 2,200 mile long trail to guide you on your way. The double blaze on the post indicates that this is a place where there is a change in direction of the trail. You find it here since this is where the AT makes an abrupt left turn and diverges from the towpath. 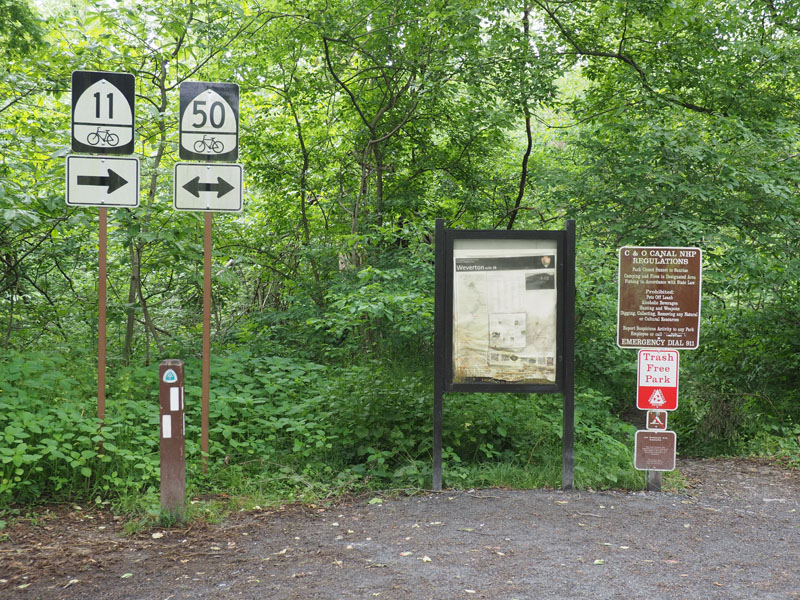 The unique element in the picture above are the road signs for bicycle routes. I do not recall seeing these anywhere else on the towpath. Some extended research has revealed the existence of a U.S. Bicycle Route System that covers the entire US. Interesting!

Brunswick has a massive railroad yard that is operated by the freight railroad company CSX. There is also a separate section in this railroad yard where the suburban MARC trains are parked when not in use. During the stretch of our walk closer to Brunswick, we walked next to a line of closed auto-carrier rail cars (also called autoracks) that seemed to stretch at least a couple of miles, more than half way to Weverton! I am not used to seeing such long trains. This is a picture of a coal train passing by the parked auto-carriers just outside of Brunswick.

We did see a couple of new birds for the first time this year. There was the goldfinch,

and the other bird was a female wood duck with its little ones.

I had seen the same kind of ducks in the same area around the same time of year many years ago.

The graffiti in the picture below was the source of one of the other suggestions for a title for this blog. It was difficult decision at game time!

The location of this piece of graffiti was one of the supports for the Route 17 bridge across the Potomac river at Brunswick.

You can barely make out the remains of lock 31 of the canal in front of the bridge support in the picture above. Our car was parked under one of the other supports for the bridge closer to the river itself.

We took the back roads once again when returning home. I think this is the route we will be taking from now on to go to Brunswick. It avoids the stress of the highway traffic and lets us enjoy a scenic ride through the more peaceful back roads of rural Maryland. Why rush?!