This write up is from my early days on the towpath. The pictures shown were taken with an analog camera, and I just scanned them into the original text for the purpose of this blog.

**************
I ran from Pennyfield Lock (mile 19.6) to Great Falls (Mile 14) on Saturday. I left home at around 7:15 am, as the sun was rising between the suburban homes that line the roads of Montgomery County, as it began to flood the intersection of Darnestown Road and Quince Orchard Road with a brilliant yellow. The sky was clear except for the jet trail of an airliner – a tiny dot in the sky, carrying human beings on their morning ride to a far off place. Imagine all the souls in that one tiny speck…

I arrived at Pennyfield Lock as the sun was beginning to hit the canal through the trees. It was below freezing as I backed-up the car into an ice-covered spot in the lot. It had snowed on Wednesday, and as I walked on to the trail I noticed that it was still covered with snow. I was uncertain about how far I would be able to go under the conditions. I could see that others had traversed this area after the storm – shoe prints, paw prints and tracks from bicycle tires were clearly visible. I started walking and realized that the soles of my shoes were offering a pretty good grip on the ice and snow. All I had to do was avoid the slippery parts, either where the sun had started to melt the snow, or where the trampling of feet had melted the ice, only to have it refreeze once again in the night. I found out that I could run! 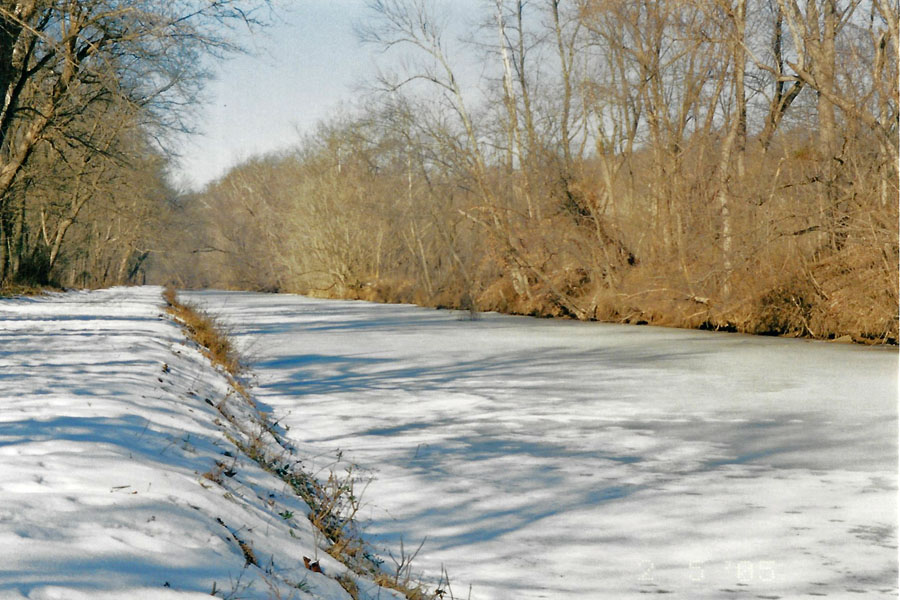 The river was quiet early in the morning and covered with a layer of mist. There was no sign of ice on the water. The canal itself was frozen in parts. The water was pouring out over the gates of the lock and through its cracks, but further away from the lock the canal was a sheet of ice. There were footprints in places, perhaps from when it had been colder, and the ice thicker. There was even a snowman. It did not look too safe to be on the ice today. I could see cracks in places. 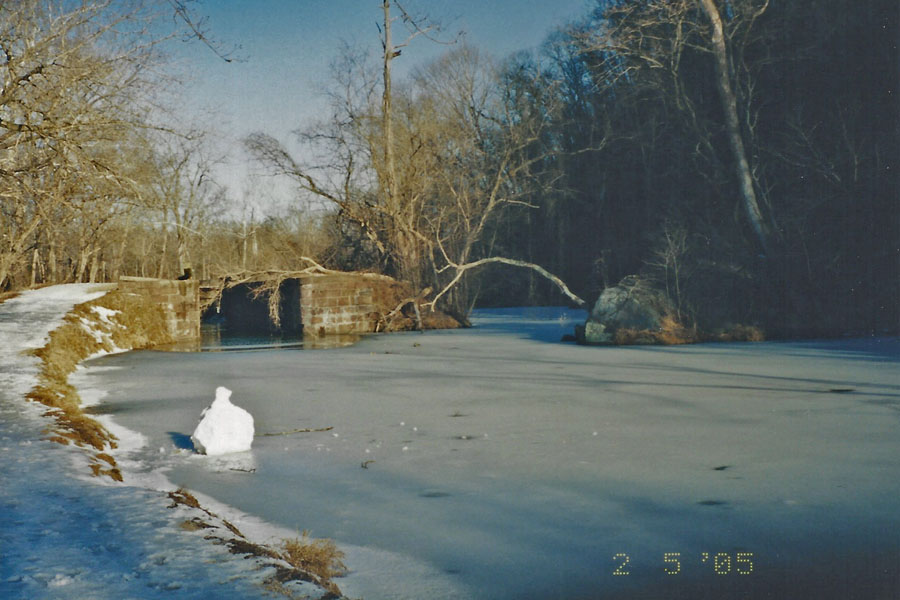 Great Falls is an area where the Potomac River drops by about 60 feet through ferocious rapids. The power of the water is awesome. As you approach the falls you can hear the roar of the water. As you cross the bridges that take you to Olmsted Island in the middle of the river, you experience the river at close quarters – the violent rush of water, and the white boiling foam as it blasts through the channels and crashes against the rocks. 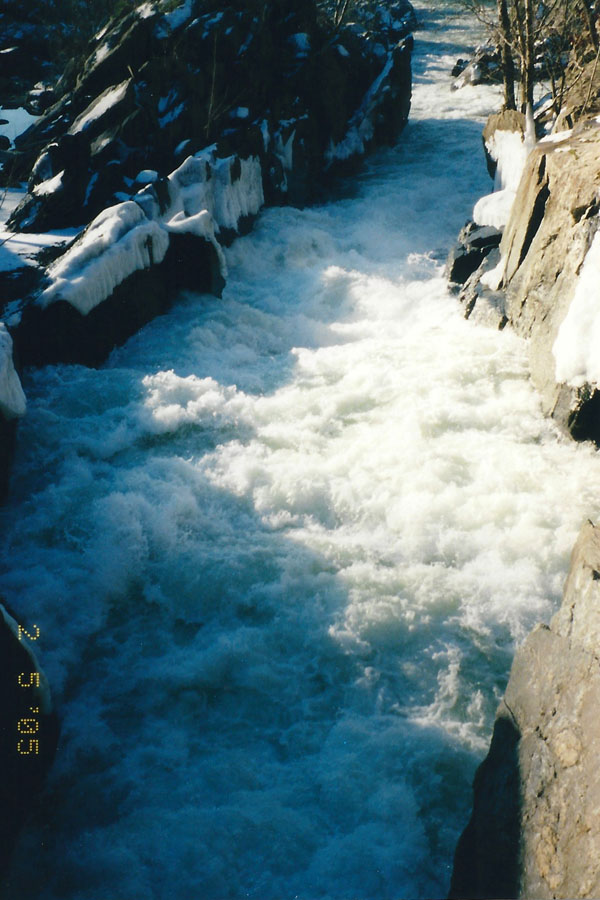 It was fantastic to be out on the Lookout at the tip of the island in the cold of the morning. 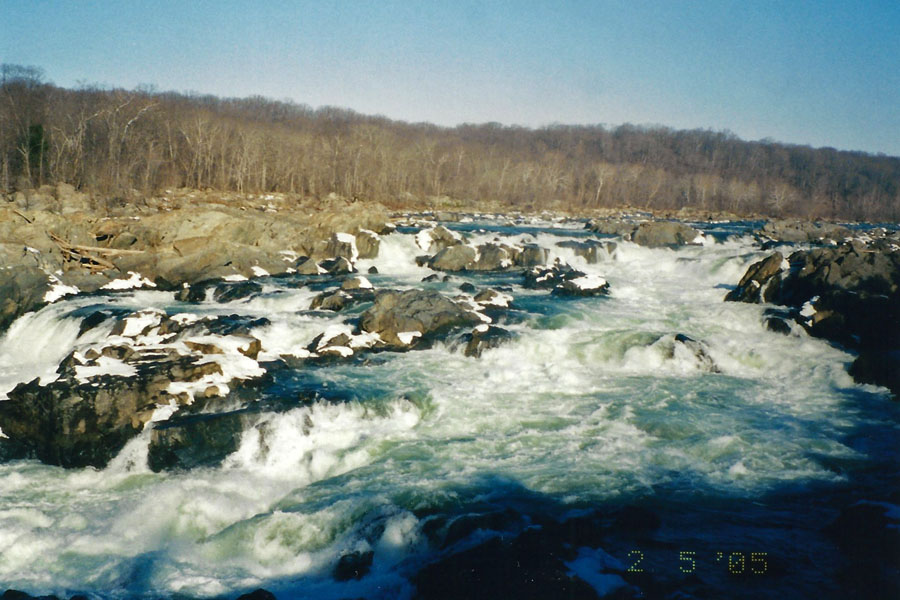 I was the only person there, looking down at the roaring rapids and the rocks partially covered with snow below me. The birds that I had seen in summer at the bottom of these cliffs were gone, probably headed south. There were geese flying up in the sky in pairs, honking noisily, and probably also headed south. I started singing loudly to myself – I will survive, as long as I know how to love, I know I will stay alive, I’ve got all my life to live……

I started getting cramps in the calf muscles as I started my way back to Pennyfield Lock. It took me completely by surprise since I had covered greater distances in the past without problems. Perhaps it was the cold and the extra effort being made to ensure that one did not land on one’s butt! The rest of the trip was covered more carefully. As the sun had come up and was in the process of melting the snow and ice, it had also become more slippery on the trail. I negotiated the trail bareheaded and in my T-shirt as I removed my ski cap, track-suit top and gloves to enjoy the feel of the cold against the sweat on the skin. On the way back, I saw something sticking out the ice in the canal. A more careful investigation revealed the head of a deer with the neck all chewed up, probably by birds pecking at it. I then noticed that the rest of the body of the deer was below the melting ice of the canal. I think this was a case of an animal trying to cross the canal and falling through the thin ice. This is nature in action, and should also serve as a warning to us “civilized” folks to be careful out there. I also noticed that the river was not as quiet as it appeared to be at first glance. There were various birds on the rocks. I saw a group of more than 100 ducks and ducklings in the middle of the river, fighting the current. What a sight!

I cannot imagine tackling the cold these days in the way I did in 2005 as far as the clothing is concerned! I would certainly try to run on the snow/ice under similar conditions if I were on my own.