This is the first new bicycle that I have bought for myself. (I did actually buy a used bike once before – as an unemployed graduate student – for almost zero cost! Maybe that is a story for another day…) The bike I have been riding for the last few years belongs to Teresa. It is a woman’s hybrid bike that has served its purpose, but it is somewhat small for my size, and it was not really built for the heavy-duty usage that I was putting it through. I had somehow managed with her bike, not feeling a necessity to spend money on this background pastime of mine that could be considered non-essential. I kept postponing a final decision about a new bike. But the kids finally put me to shame with a present that they had bought me last year. It was a camera bag that was supposed to attach to my new bike! Where was the bike?!

I did some research before going out to the stores. I test rode a couple of bikes. I did have a couple of bikes in mind when I finally went out shopping, but I ended up buying a completely different bike from those on my list! My final choice was between a somewhat staid REI Co-op CTY 2.1, and the Trek Dual Sport 2 that looked more sporty. Both bikes had similar features. The Trek bike might even have been a little ahead in feature comparison, but I finally got the bike from REI because of the benefits of membership in REI.

I rode the new bike on the towpath for the first time last Thursday. The first challenge was fitting it on to the bike rack on the back of the car. It turns out that the bike barely fits into its position on the carrier. I am going to have to make further adjustments. 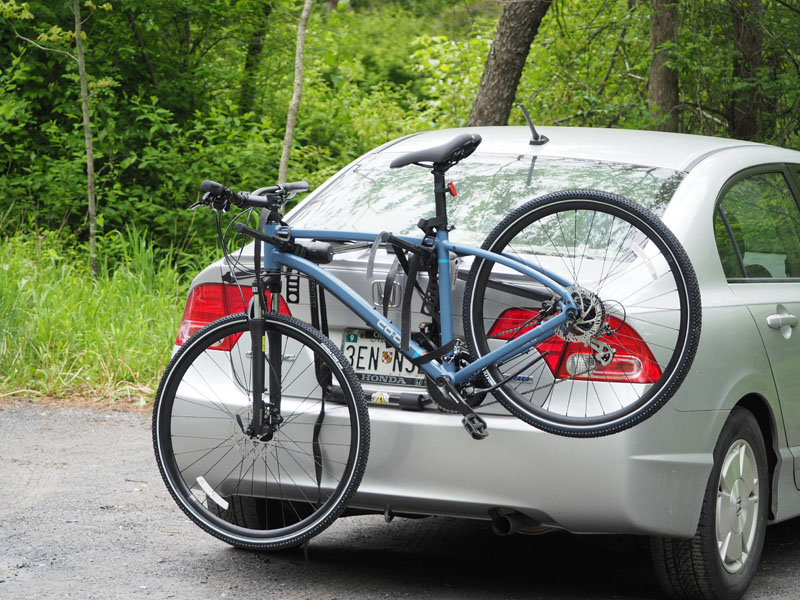 It was actually not the best day for a ride, but the bike had been sitting at home for a while, and I was itching to try it out. It was cloudy and chilly, and I could feel the cold of the gentle breeze on the skin as I rode. Fortunately, I was somewhat prepared for the weather – with a long sleeved bike shirt and a sleeveless vest (apparently also called a golf vest – who knew!) on top of it. It took a while for the numbness to go away from my fingers.

Since this was also my first bike ride of the season, I also found it to be somewhat of a relearning experience. I do need to get the muscles that are used in this exercise routine back in shape. And it was also the other simple and basic things that I had to think about while riding. I had to remind myself of the danger of drifting across the trail if I turned my head to look back while riding. I had to get comfortable once again with the experience of passing other people who were on foot or on bikes on the trail. You cannot always predict how somebody else will respond to your presence.

The bluebells have almost all disappeared from the trail, but most of the flowers that I regularly observe in Spring have made their appearances. Getting on the trail, it was this field of buttercups near Pennyfield Lock that first caught my attention.

Once on the trail, I stopped every once in a while to take pictures of the Wild Phlox, Fleabane, Chickweed, Ragwort, Spiderwort, Honeysuckle, Dames Rocket, Yellow Iris, Violets, etc.. The Rosa Multiflora will be flowering soon.

The squirrels and the birds were quite active. The presence of a relatively fast moving bicycle on the trail seemed to confuse some of these creatures. One of the squirrels almost ran into the spokes of the bicycle. Birds would occasionally fly across the front of the moving cycle, and sometimes they would fly ahead of the bicycle and try to land on the trail, seemingly misjudging the speed of my approach towards them. I deliberately made an effort to keep a somewhat slower pace and not speed up. I needed to get more comfortable with the gearing on the new bike first and find out what worked the best for me.

There were plenty of turtles that were out and about.

I did notice that the herons were missing in action. (It fact, they have been generally missing in action during our last few outings!) I finally got a sight of one of them in the distance towards the end of the ride at the pond near Rileys Lock. 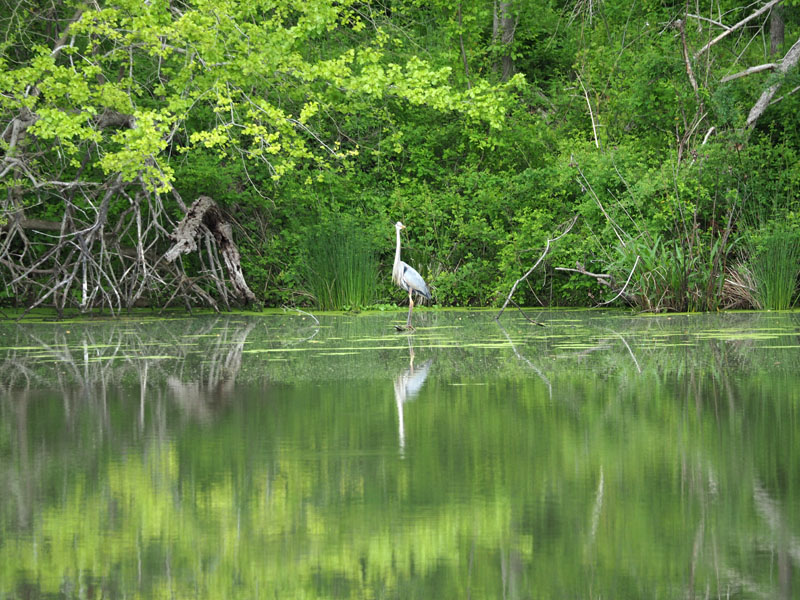 Even though I was prepared for it, I was surprised to have encounters with snakes this early in the riding season. (I can sense a shudder going through some of the readers!🙂) Both of the snakes I saw were small in size.

I cannot make up my mind about the kind of snake the second one was. It seemed to have the pattern of a Northern Copperhead on its body, but it was darker than the Northern Copperheads I have seen during previous outings. I also do not think the eyes were the right shape. This one had round eyes. Anyway, I kept a safe distance away from it.

And then there was the experience that I mentioned in my previous blog!

All in all, it was a good first ride on the bike!

2 thoughts on “Riding My New Bicycle For the First Time”