The constant jangling of the metal handlebar basket as I bounce along on my bike on the towpath is something that I have gotten used to. The sound is fading into the background as if I were wearing some noise cancelling headphones, but it is only what is left of my middle-aged rattled brain doing its thing!  With regular six to seven hours of steady biking all by myself day after day, starting in the relative cool of the early mornings, and continuing through the middle of these hot and humid summer days; with the legs beating a regular rhythm on the pedals without end; with the steady concentration of the ride and your thoughts only broken up the occasional scenic stops, the snack breaks, and the infrequent interaction with folks you come across on the trail;  it is all something that is becoming second-nature to me.

It has gotten to the point where I can recover from my long rides and do the same thing the next day without feeling the ill-effects of the previous days’ efforts.  It does not matter if I had been riding on a flat surface on the towpath or if I have overcome some challenging slopes on the Virginia side of the river or on the Capital Crescent Trail the previous day.  So I think I am about as ready as I can be for the long ride at the end of August.

I have biked all the way to Reston, VA, near Dulles airport, on the W&OD trail.  This picture was taken at the place where I stopped for lunch and turned back to return home. 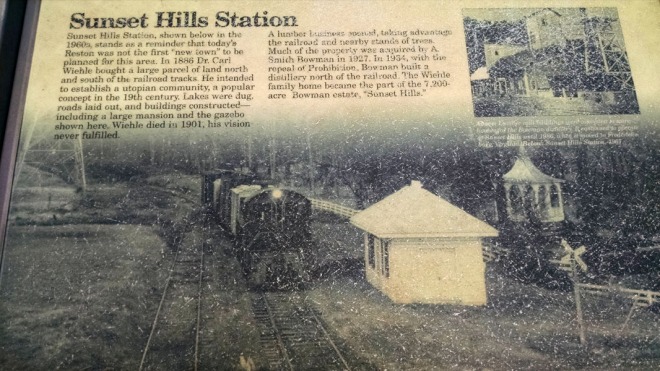 I would eventually like to bike to the end of the W&OD trail.  It is 45 miles long.

The picture below shows the scene at Lock 7 in the morning during a different ride.  It is still cool in the morning at this point and I am riding towards DC. I eventually crossed the Potomac on the Key Bridge and took the Arlington loop.

This is Swain’s Lock later the same day as I was returning to Riley’s Lock.   The heat had built up by this time. 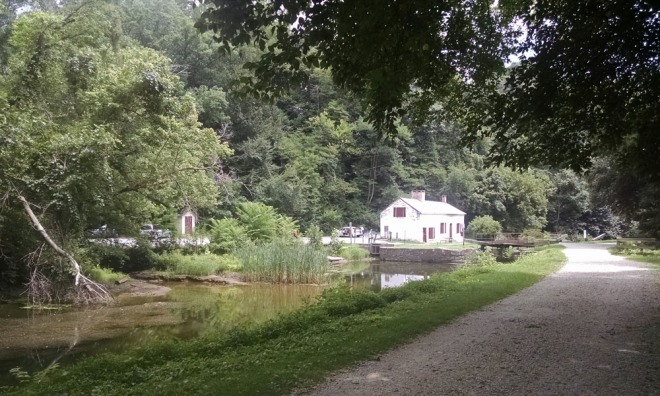 The picture below was taken at the end of the same ride. The kids are on Seneca Creek near Riley’s lock.  As I mentioned in another blog, there are kids everywhere! 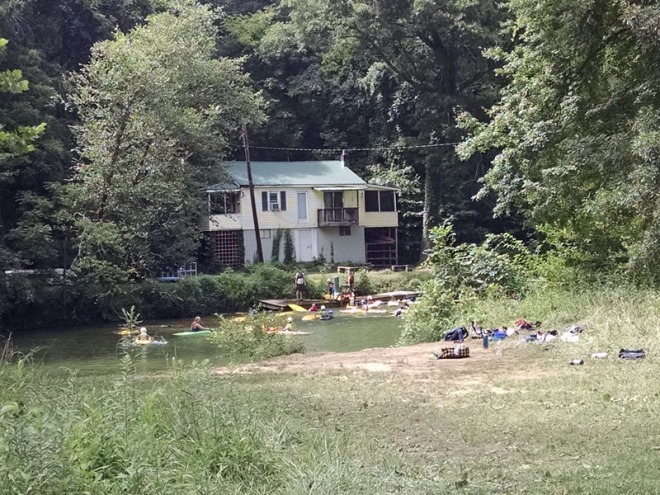 This picture was taken early in the morning the next day at the start of another ride.  The location is north of Taylor’s Landing near Sharpsburg, MD. 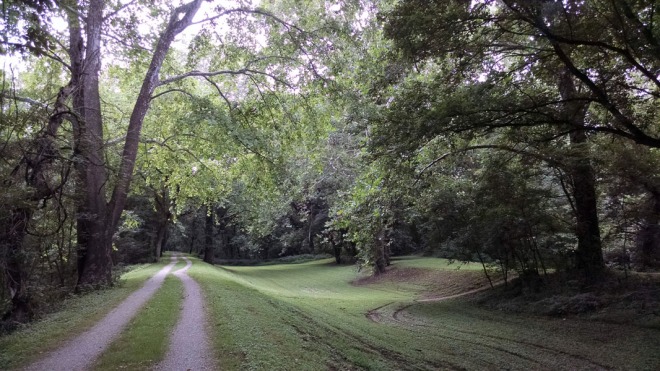 As I was getting my bike out of the car, a few vans full of kids and equipment drove into the parking area.  When I inquired if I could help by moving my car out of the way, one of the adults told me not to bother.  They were simply dropping the kids and their bikes off so that they could ride the trail, and the vehicles were going to pick them up at the other end of the ride.  I like kids, but I did make sure to  start my ride going in the opposite direction of where they were headed.

I passed the Dam 4 cave, and then Dam 4 itself, a couple of miles north of Taylors Landing. 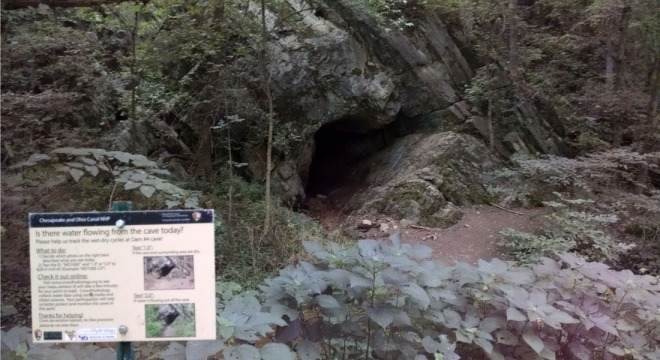 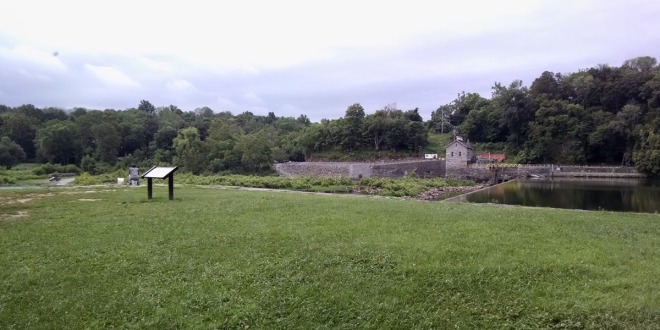 During this ride I biked all the way to Williamsport, MD, before turning back.   There is a lot of work going on in the park in Williamsport and I had to navigate my way past a dump truck that was blocking the trail.  The National Park Service is trying to get the canal in that section set up so that they can give rides to visitors in replica canal boats.  On my way back, at Taylor’s Landing, I did come across a group of four older women who were riding from Cumberland to Washington, DC, over five days.  They had actually roughed it out the previous night by staying in one of the lock houses.  It was unusual to see such a group on the trail.

Here is a recording to the song mentioned in this blog.

Ever since I started biking instead of running, the distance that I have been covering in a single day on the trail has become significant enough that I find myself going over the same territory repeatedly, much more frequently than I am used to.   This does not necessarily dissuade me from riding, especially since the biking experience seems to be more about the actual process of biking rather than slowing down to take in the surroundings. However, human nature being what it is, I am always on the lookout for new places to go to and things to experience. During the last few weeks I made my way over the Potomac River into Virginia and up to Mt. Vernon.

So it was that I ended up actively investigating new trails for my ride last Friday on  Bikewashington.org. I saw that there was a way to get to the W&OD rail trail in Virginia heading west.  I read more about the Custis trail that could connect me to the W&OD.  (I had noticed the trailhead for the Custis trail during my ride to Mt. Vernon.)  This trail was built in in the 1980s, apparently at about the same time as Interstate 66 (which is also called the Custis Memorial Parkway in these parts).  Reading the reviews of this trail began to make me nervous.  The 4 mile trail running next to the highway (behind sound barriers) was well laid , but it had too many steep ups and downs.  People talked about the challenge posed by the layout of the trail, and of having to walk their bikes through certain sections.

It was with a little trepidation that I set out for the Custis trail on Friday morning, just a couple of days after having taken a nasty toss on the C&O Canal towpath, wondering if I would have to beat a hasty retreat.  But I was underestimating my physical capabilities.  The hills were tough enough, and I had to shift to low gears to tackle some of them, but I made it to the end of the trail unscathed.  My initial speed for this section was quite slow (as I tackled the city streets of Rosslyn soon after the Key Bridge), but after that I managed to hit a healthy pace in spite of the nature of trail.  I think that my confidence for the August ride just shot up one notch!

There were many miles to discover on the W&OD trail.  The 45 mile trail extends west beyond the Washington Beltway (Interstate 495) and starts at its eastern terminus in Shirlington in Arlington, VA.  As I navigated the trail attempting to realize the maximum distance I needed to cover for the day, I began to get a better understanding for the bike friendly nature of the town of Arlington.  There are trails everywhere! There are bike signs with directions, similar to the road signs (but smaller in size), for every side trail heading off into the local neighborhood.  I saw signs for the Four Mile Run Trail and the Bluemont Junction Trail, both major trails with good connections.  These asphalt covered trails ran through woods and on the sides of roads.  They even had a dividing line running down the middle for managing bike traffic.  At street crossings there were specific traffic lights for bikes.  There were water fountains for replenishing your drinking supplies in strategic locations. All of this was indeed a discovery for me.   I see myself doing further explorations on a bike in Virginia.

I made it back to Maryland without mishap after tackling the Custis trail once again on my way back.  The rest of the ride was uneventful.  The hot and humid day caused me to drink much more water than I expected, and I was thankful that I had refilled my water containers in Virginia.  There were hoards of people on the trail during the ride back.  Now that summer vacation has started, there are kids out everywhere.  One has to be more careful riding!