It was around freezing temperatures when we woke up, but the light breeze made it feel colder.  My fingers froze the moment I stepped out to take a morning picture. 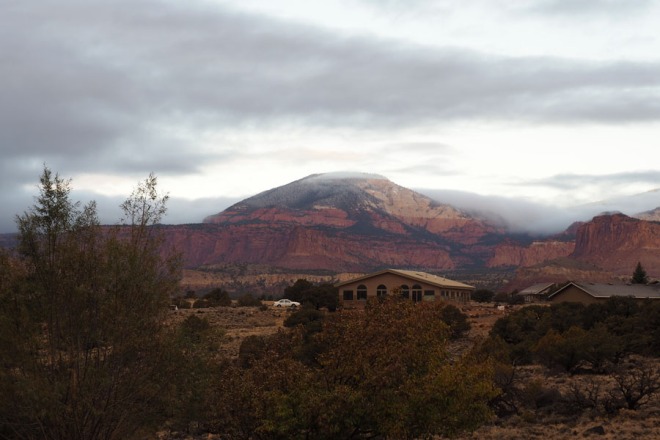 We were down for breakfast as soon as the place was open.  The food was the standard fare, but it was very good in spite of that fact.  The bread and the pancakes were outstanding.

And then it was off to the Capitol Reef for a morning of hiking.  We would be leaving for Red Cliff, CO, as early in the afternoon as possible.  The cold weather would not stop us hiking, but there was the slight chance of rain that could.

This picture was taken from the car as we started descending from the rise in the road. 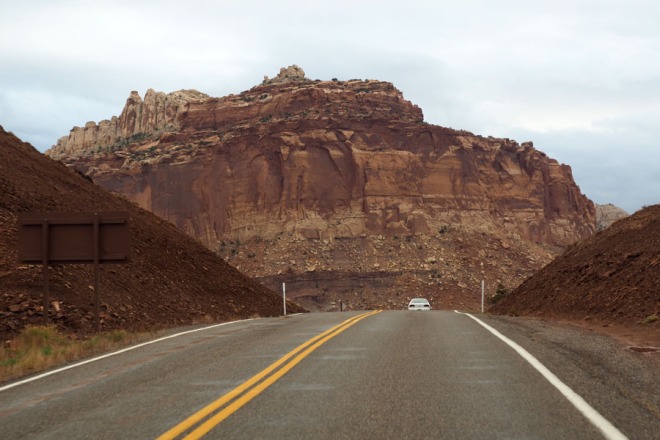 We drove past the Fruita schoolhouse. 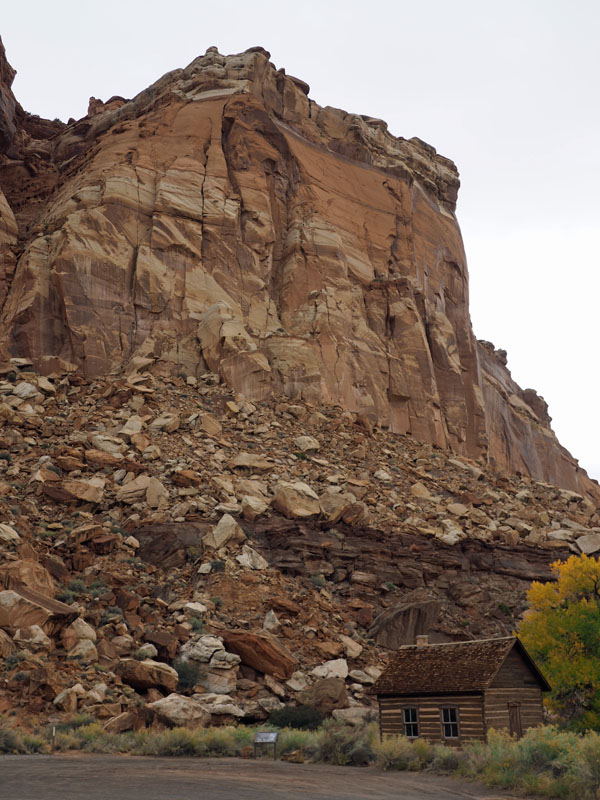 The next stop was at a roadside display for Petroglyphs. What we saw here was not as impressive as the one in Newspaper Rock Historic State Monument.

We also passed a few orchards along the way.

We finally arrived at the trail head for the Grand Wash Trail that we were planning to do.

For those who do not know, a wash is a path that water flows through naturally only when there is excessive rain and flash flooding. We had never walked a trail in a wash before.

This particular wash was a path for the water flowing between cliffs of mountains. Essentially, the wash was in a canyon, and the path of the water depended on the nature of the canyon. An obstruction in the way because of the presence of a mountain would cause the wash to change direction.

This picture was taken near the beginning of the walk.  For the purposes of the hike, you could walk anywhere in the wash.  The surface was covered with small rocks of all kinds.  It was also muddy because of the rain the previous day. 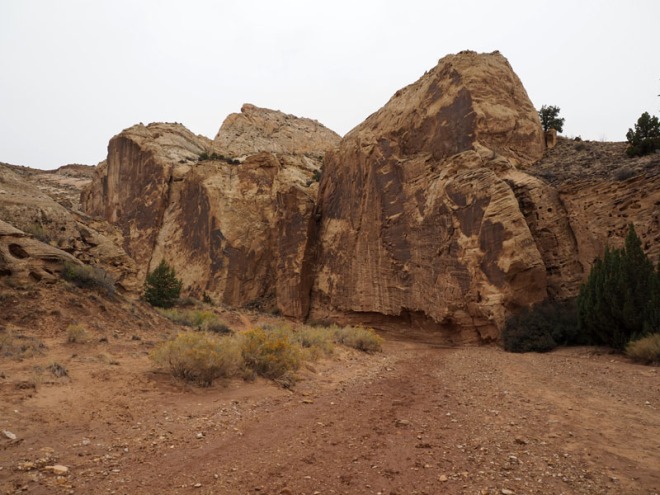 It began to drizzle as we started our walk, but we continued.  There seemed to be no danger of flash flooding.

When the water encounters a barrier and changes direction, it actually eats into the rock and weakens it.  You can see this happening in the picture below.  Eventually the rock will have to collapse as more and more of it is eaten away.  This is the way of nature.  Nothing lasts forever.

The distance between the cliffs got reduced significantly in the narrows section.  Imagine the waters of a flash flood encountering these sections.

The water has cut deep into this rock as it changes direction here. 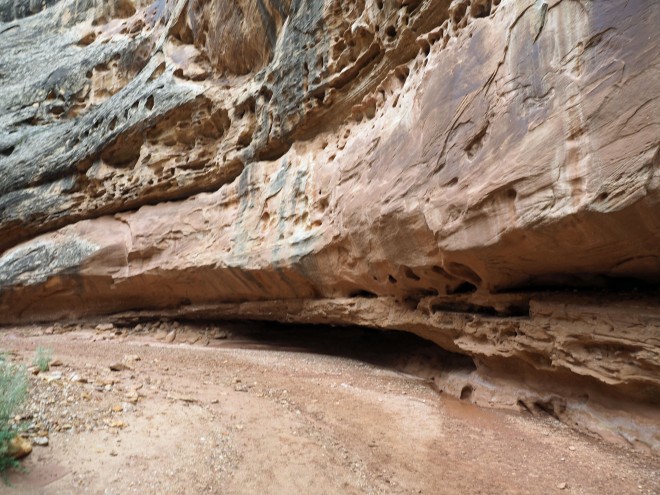 In the narrows section of the trail.

The wash did widen out after a while.  The rocks had interesting shapes and towered over you, all around you. 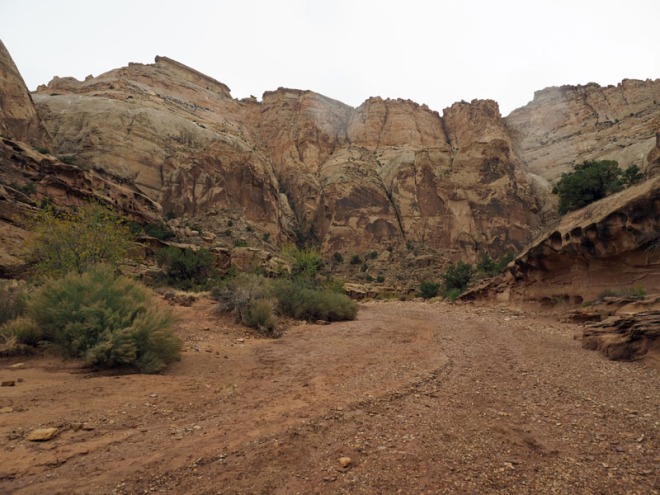 The depression in the rock in front was huge.  I am not sure what caused it, but it is in the way the water changes its direction.  It could be that a slab fell out.  It looked like an amphitheater to me.

We saw rocks of all kinds of color in the the bed of the wash.  I did not get a picture of the orange ones.  All of these pieces are carried by the water when there is a flash flood.

We reached the other end of the trail.  You can drive on a dirt road to this point on the scenic road that I took pictures of in the previous blog.  There is even a basic restroom here.

These pictures were taken on the way back.  Look at the shapes that the water has carved on the rocks near the canyon floor. 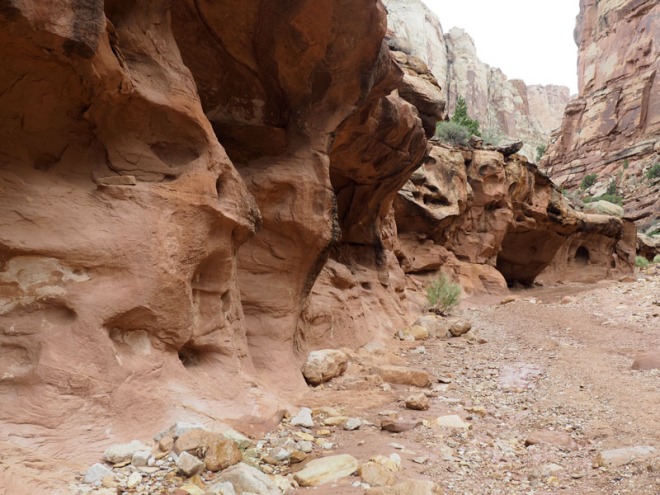 I took this picture just to capture the beauty of these massive rock formations.   You can see that this mountain is a barrier to the flow of water and changes the direction of the wash.

This is all created by flowing water!

And then we had the sighting of the bighorn sheep!  We had been waiting for something like this all through the trip, and it finally happened on our last day in Utah.  You should have seen this guy navigating the rocks.  They are very surefooted.  We have to thank the couple who were hiking in front of us for directing our attention to the animal. We could have missed it completely! 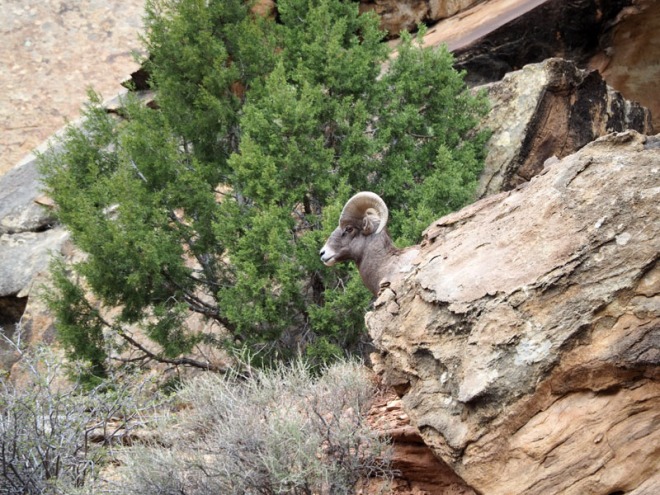 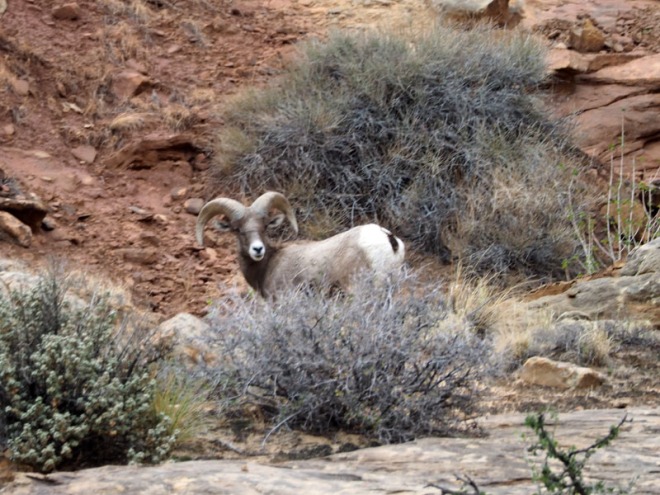 I took this picture just because I was imagining what this rock face looked like.  There are a lot of faces in pain looking down on you!

We reached the end of our walk in the wash after a couple of hours.  It was around noontime. My not-so-trusty GPS said that we had walked 6 miles, while the sheet of paper in my hands said that we should have actually walked 4.4. miles.  I think the distance we covered is closer to what the GPS device says.  We stayed on the bed of the wash even when there were shortcuts beside it.

And then we continued our drive through the park to head out of town, and on to Red Cliff, Colorado.  We had a long drive ahead of us.  As we hit the east end of the park we encountered some very dark rock formations that were also quite pretty. This picture was taken from the passenger seat. 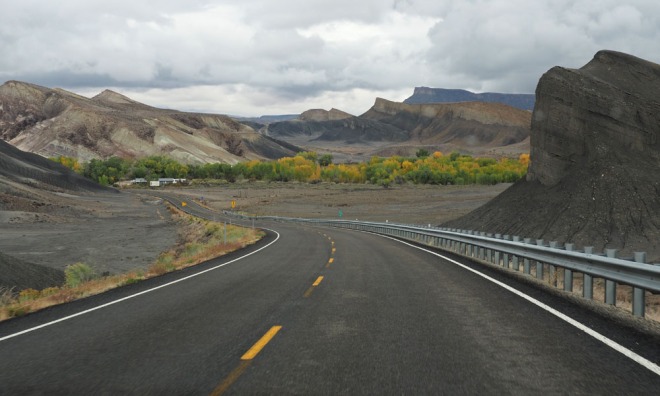 We drove on Interstate 70 for hours with only a short stop to use the restroom.  A lunch of trail mix and apple were consumed as we drove.

We arrived at the exit for Red Cliff near the town of Vail and took US 24 heading east.  The GPS device said that we had to drive 9.9 miles on this road to arrive at our destination, but it was also turned off at this point because it was giving me bogus directions as we drove.  (Bad software can do terrible things!)

Anyway, we passed a small little town called Minturn, quite cute, soon as we exited the highway, and then the narrow road that we were on began to climb through woods along the side of a mountain. We climbed and we climbed for a while, until we crossed a marker that said that we were about 13,000 feet!  It seemed that we had been driving on this road for a while and, with no signs of civilization around,  I was beginning to get nervous.  There were other vehicles on the road behind us who seemed to be surer of themselves.  The road was descending rapidly at this point.  I decided to pull over to the side so that we could get our bearings.

I took this picture of the green bridge crossing the valley below as Teresa turned the GPS device on.  (You could not use a smartphone with GPS in these parts because there was no signal!)  She told me that we were a couple of hundred yard from our turnoff for Red Cliff.

Sure enough, when we reached the bridge, just before the start of the bridge, off on the left side, was this narrow road to Red Cliff.  You can almost make out the marker in the picture below. 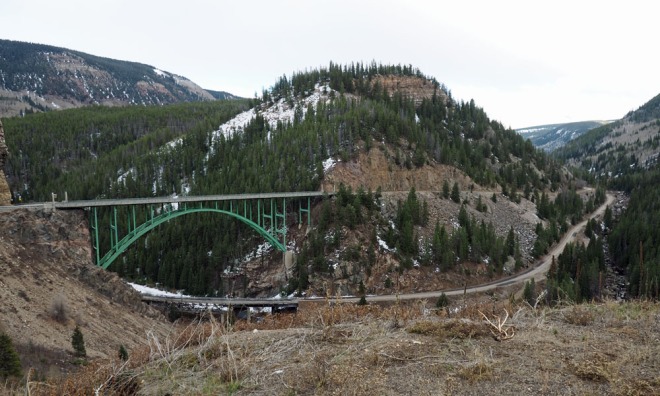 There was barely place for two vehicles to pass on this narrow road set against the cliff.  It  was descending rapidly.  In the valley you could see a little town with old houses and even a railroad track.  There was no way to pull over to take pictures.

The village below us was Red Cliff.  We had arrived. This is the Green Bridge Inn that we are staying at.

This is a view from outside our third floor room.   The room was very nice, with all the modern fittings, but it also had its own character.  Rooms like this are much more enjoyable that the cookie-cutter rooms of the big hotel chains.

I was taken by the look of this small village.  When checking in, I asked the girl at the counter questions about the place.  She was from that town.  She gave me a small slip of paper with some information about the village. It was at 9000 feet! It is the oldest town in the county, formed in the late 1800s, when silver was discovered locally.  At the turn of the 20th century, it boomed as a mining town, with saloons, brothels, bank, sawmills, and even an opera house.

The girl at the check-in counter also told me about a road from the village that went over the Shrine Pass, at 13,000 feet.  She said it was a dirt road in parts, and that we could turn back and return to town any time we wanted.  There is a small sign in the village pointing to this road.  I wish we had time to do this drive, but it is not going to happen.  We have places to go.

There was a walking tour one could do, and the two of us set out on a walk after putting our stuff away.  I was told that you could get a good picture of town from the cemetery on top of the hill.  That was where we went. We were breathing hard in the thin mountain air as we climbed, but we did get there.

You can see how high we had climbed above the village from the picture below. 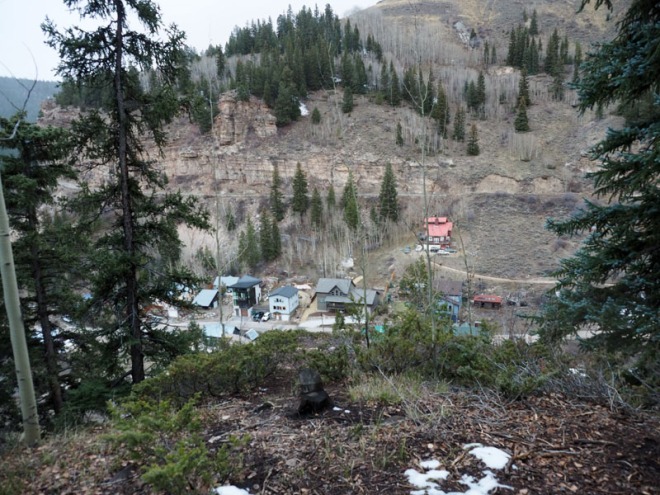 The pictures of the village itself that were taken from the cemetery were not clear because of things in the way.

The houses in this village were all different from each other and they looked like they were all in different conditions. Some of them were pretty. I don’t think there is a concept of zoning.  Here is a picture of one of the houses.

People have to depend on satellite signals to connect with the outside world.  We saw people taking walks with their dogs.  The dogs were usually running free.  We could hear people talking to each other outside the homes.  You crossed a bridge to get from one side of town to the other, and below the bridge you could see a stream and the abandoned rail tracks of the old Denver and Rio Grande Railroad.  The trains ran through the valley in these parts during its heyday.

It snowed lightly when we were walking up on the hill. It also felt very cold but I did not know how cold it actually was.  Being up in the mountains, I imagine that temperature can be really low.

We had to find a warm place when we returned from the walk. We walked into the only eatery in town.  It was called Mangos.  This place is not open every day of the week.  We were fortunate about the day of the week we had arrived.  The inside of Mangos turned out to be very modern.  It was primarily a bar and most folks were at the counter, drinking and watching American football or hockey on the big screens.  Our waitress/bartender was very nice and the food was excellent.  In general, we have been very fortunate about the food we have been getting for dinner during this trip.

It had turned dark by the time we were done. Other than a few lights in the houses, the only big source of illumination were the lights from our hotel across the road.  There were no street lights and it felt dark. 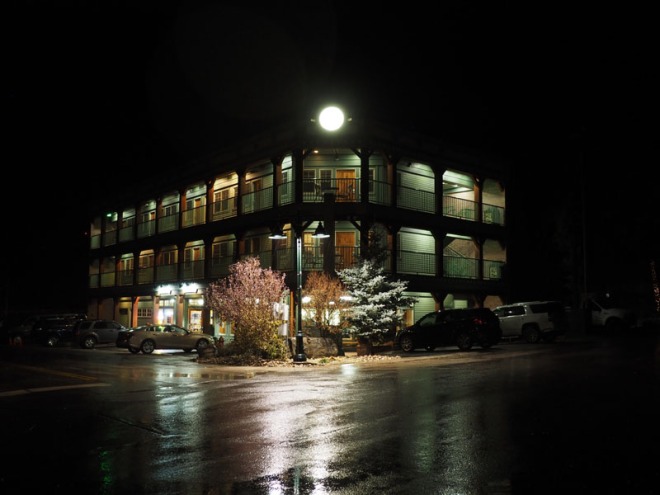 I had a slight headache when I went to bed because of the altitude.  We have been taking diamox for the last couple of days to adjust to the altitude.

Our overnight stay in Red Cliff turned out to be a somewhat unexpected treat.  Today we go to Pikes Peak.  It is at an elevation of over 14,000 feet.