We had a very nice time in Venice in spite of the short stay there.  It was now time to set out on the next leg of our Italian vacation. We were heading to Florence (Firenze).

It was early in the morning when we started our walk towards the location where our bus was waiting for us.  We got our last sight of the Grand Canal partially lit up by the morning sun as we crossed over a bridge on our way on foot.

We passed the bus stand for commuter buses from the mainland. 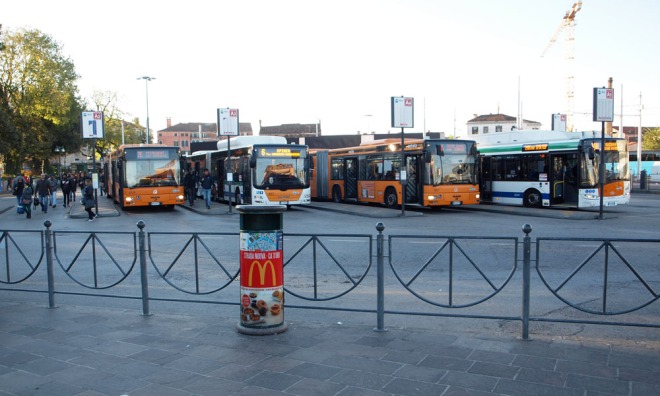 We caught the Venice People Mover train from a building close to the bus stand for a short ride to the  Tronchetto parking lot where our bus was waiting. 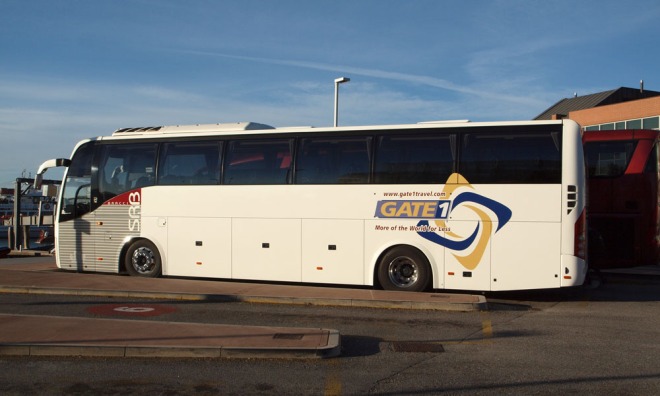 Soon we were headed off the island over the bridge paralleling the bridge for the railway line. The Ponte della Libertà (or Bridge of Liberty) was built by Mussolini in the 1930s.

On the mainland we followed the railway tracks for a short while.

We passed a stationary Frecciargento high-speed train. This one can get you from Venice to Roma in less than four hours. (BTW, there are faster train lines in Italy!)

Then we were in the countryside and on the highway passing Padua and Bologna. 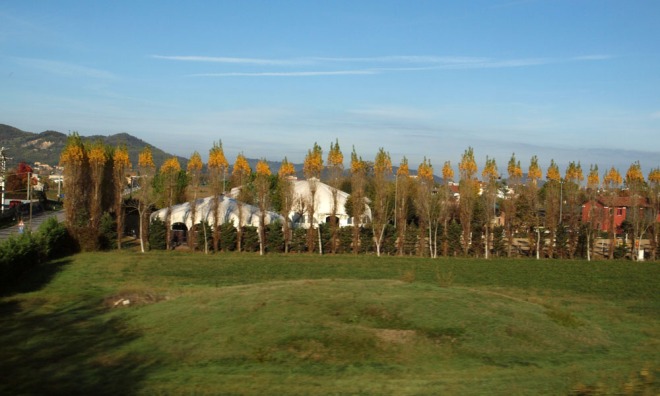 After a few hours, including a couple of “il bagno” stops along the way,

we entered a stretch of highway cutting through the Apennine mountain range, crossing from the eastern side of Italy to the western side. 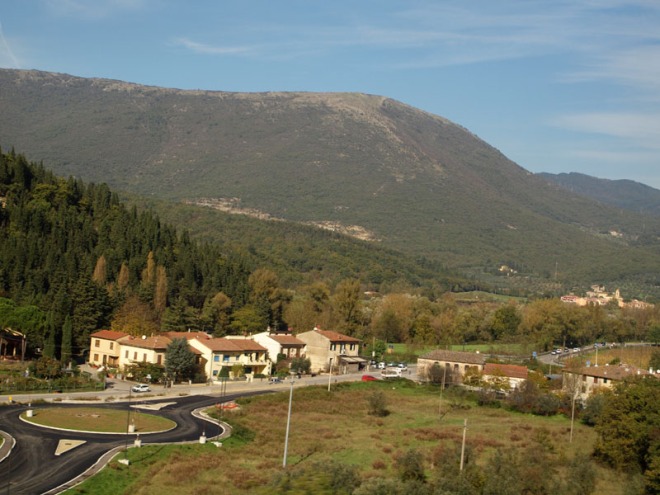 There were several impressive tunnels that the highway went through while crossing this range.  This highway is also a part of the European Union highway system with a European highway designation E35.  We saw European Union license plates on trucks from different parts of the continent.

We reached our destination for the afternoon, the province of Lucca in the Tuscany region soon after.  We stopped at the Fattoria Il Pogio vineyard just outside of the town of Lucca for lunch. 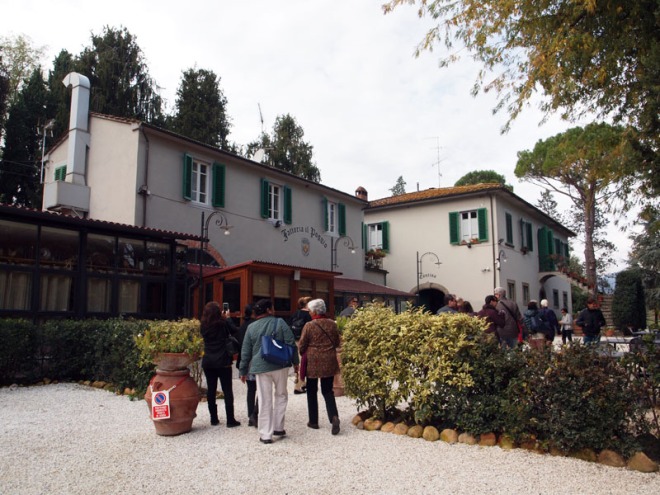 We had lunch at the restaurant after an tour of the farm led by a rather enthusiastic lady. The last picture in this set is of an olive tree. 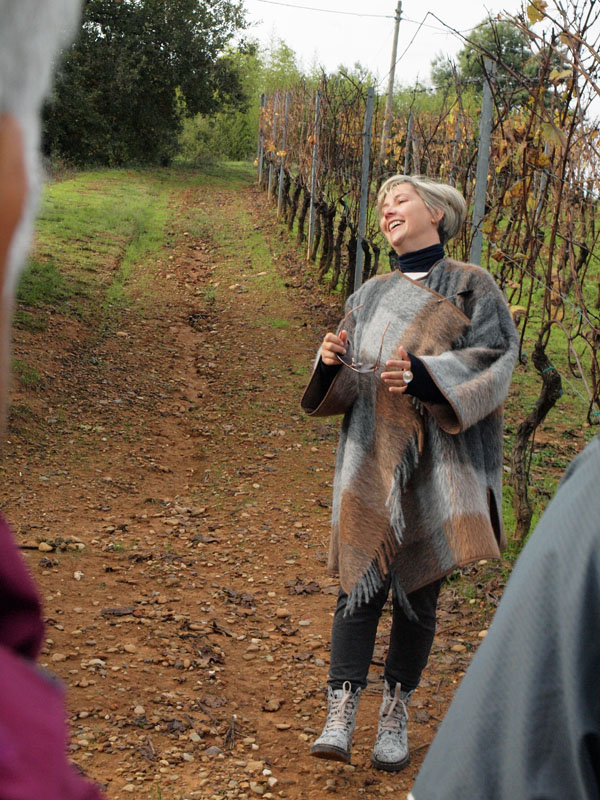 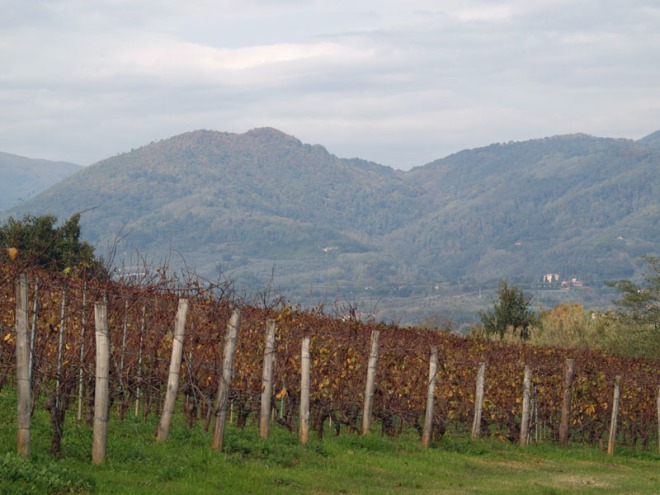 There were other tour groups at lunch, which was accompanied by a few different bottles of wine produced at the estate.

We were offered a formal meal, something typical of many of the dinners we had in Italy.  We ate and drank heartily, and people were in a great mood after all was said and done.

The rain had started to come down heavily by the time we reached Pisa for our next stop.  At the bus  stop in Pisa, we were surrounded by a number of people of African descent selling small items, including cheap umbrellas.  We bought one. It had a minor design issue but proved to be adequate for the task. There was also a minor emergency when getting people off the bus because many of them had make use of “el bagno” in a hurry, no doubt an aftereffect of the merrymaking that had accompanied lunch.  There was also the thought that crossed the mind that the impact of the leaning tower of Pisa would be enhanced by the state of mind that people were in.

The leaning tower, called the Torre de Pisa in Italian, is the bell tower for  a cathedral called the Duomo di Pisa. There is also a baptistry next to the church. The place itself is called the Piazza dei Miracoli (which translates to Square of Miracles) or the Piazza del Duomo. 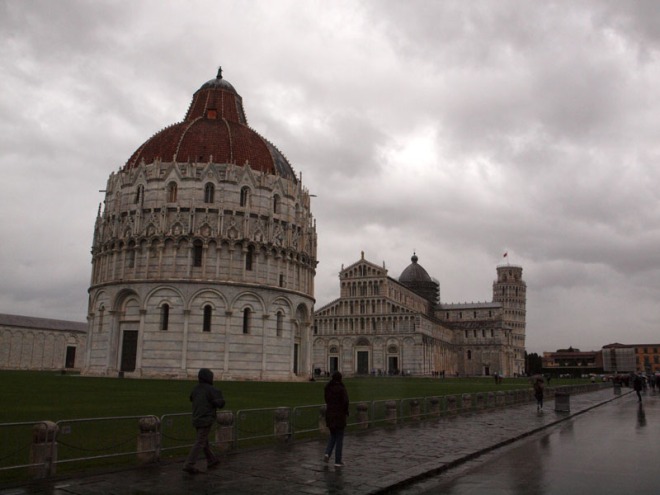 It was obvious from initial observations that the tower was really leaning (apparently about 4° at this time),

but I got to thinking that, without a context, one could even make an upright tower look like it was leaning, depending on how one took a picture of the structure, or one could even take the picture of a leaning tower from a direction from which it might look upright.  Here it is being pushed upright with some effort.

We also spent some time in the cathedral.

The area at the entrance to the piazza was  filled with little shops selling knick-knacks and food and drink.

We visited some of the stores and had drinks to warm us up before heading back to the  trolley that was to take us to the bus that was waiting at the bus stand.

The drive from Pisa to Florence was relatively short.  We got to our hotel with sufficient time left for us to go out to get some dinner.  We found a nice place within walking distance.  The menu at the restaurant showed that one could order three courses for dinner, but they did not object to each of us buying only a single item on the menu from any of the course selections.  We could see that the meals were being freshly cooked in the the kitchen that we had passed to get to our seating towards the back of the restaurant. We retired back to the hotel after some good food and wine.

It had been a relatively long and wet day and we were tired.  It was time to crash out.