The visit to Galápagos Islands and the rest of Ecuador was a great experience overall, but it did not go off too well from a perspective of my ability to take pictures during the trip.  My DSLR camera which had been showing signs of some mechanical distress (a problem exacerbated by software in the device that I think could have been better designed to compensate for the situation)  finally gave up the ghost on the islands.  Fortunately, we had bought a point-and-shoot camera with an extended zoom as a backup.  I had to quickly learn how to use it properly.  This plan worked decently for a couple of days until I found out the deficiencies of the new camera.  It was chewing up battery power at an unimaginable rate whenever I tried to use its zoom capability!   You would think that the fact that the camera used standard AA batteries would be a plus in this situation, but the problem was that we were traveling in areas where availability of such batteries was limited.  Indeed, the only batteries I was able to find in some of the places were of dubious quality, some with a local brand name,  and some others with a date of expiry that had long passed.  I did try out some of these batteries and they failed in the camera within no time.  My last line of defense was the camera on the smart phone, a device that produced pictures of marginal quality.  Anyway, I managed to get some pictures during the trip using both the smart phone and the point-and-shoot camera, the latter in a somewhat more judicious manner than I would have done otherwise.

Galápagos is an amazing place!  The government of Ecuador has shown great foresight in establishing more than 90 percent of the land on the over hundred and twenty islands (of which only five are inhabited) as an ecological preserve.  They have taken significant steps to make sure that the flora and fauna are not contaminated from the mainland these days.  Although the ecology of these volcanic islands has developed in isolation for thousands of years producing unique species of flora and fauna (a circumstance that allowed Darwin to work on the theory of natural selection), the coming of man in recent years had begun to contaminate and change the place.  Indeed, some of the islands have changed significantly because of human habitation (including the effects of cultivation and meat consumption, and the impact of the non-native flora and fauna that have been introduced on purpose or inadvertently), but amazingly there still are places you can see nature in its purest form, places where the birds and the animals are still not afraid of the humans.  Visits to such places are managed carefully with a goal of preserving the local flora and fauna and their ecosystems.  Where indigenous animal and bird populations have been depleted because of human encroachments, there are attempts at recovery.  The giant tortoises of the Galapagos are making a comeback with help from the Charles Darwin Research Station on Santa Cruz island.  There are regular attempts to eradicate the rats and other pests that have been introduced on some of the islands, pests that are killing off the local species slowly.  Some local species have disappeared completely over the years but there is still hope for many others.

Here are just a few of the pictures I took during during our visit.  (More will be posted in a regular photo gallery elsewhere.)

We stayed at the Finch Bay Resort near the main town of Puerta Ayora on Santa Cruz Island for three nights. 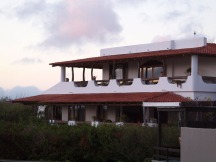 We visited a few places on the island to see the local flora and fauna.

We took a boat ride to North Seymour Island to see the birds and the animals that even to this day have not developed a fear of human beings. Here are some pictures.

The pictures below are of frigatebirds nesting. 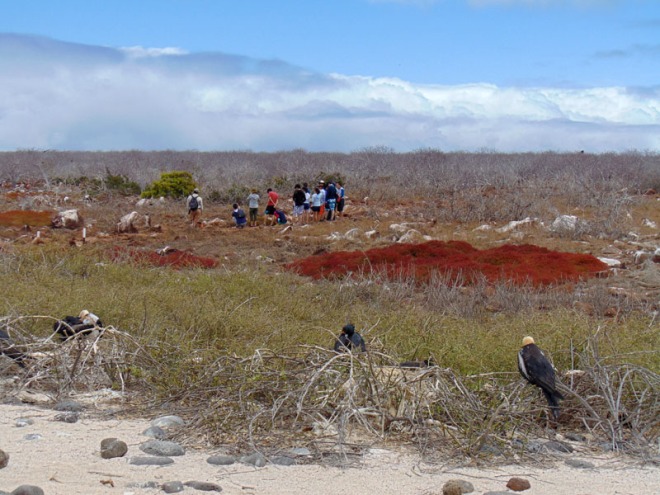 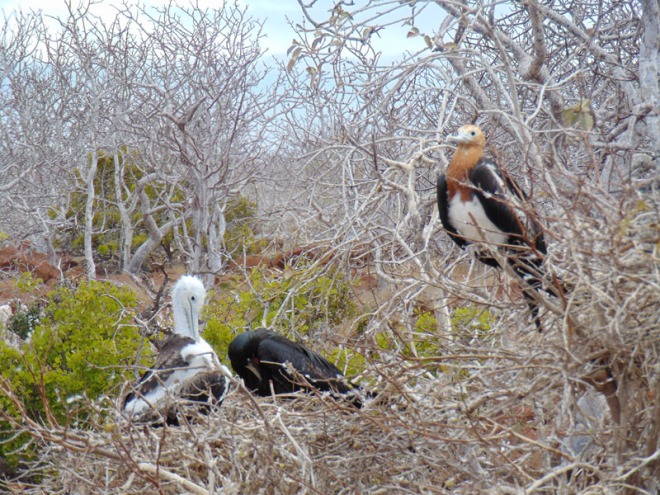 Here are some frigatebirds in action.

Other creatures on the island.