Nandi Hills is a hill station located about sixty miles north of Bangalore. Although it is a well-known place for people to visit, I had not been there in spite of my many trips to the city.

We were hoping to do a hike up the hill, an endeavor that would attempt to mimic the training experience of our recent Camino walkers. Instead, we inadvertently ended up driving on a road that took us to the top of the hill. We decided to try to start the walk from the top of the hill instead.

We had left Bangalore very early, hoping to avoid crowds. We were surprised to find the parking lot full – and on a weekday. 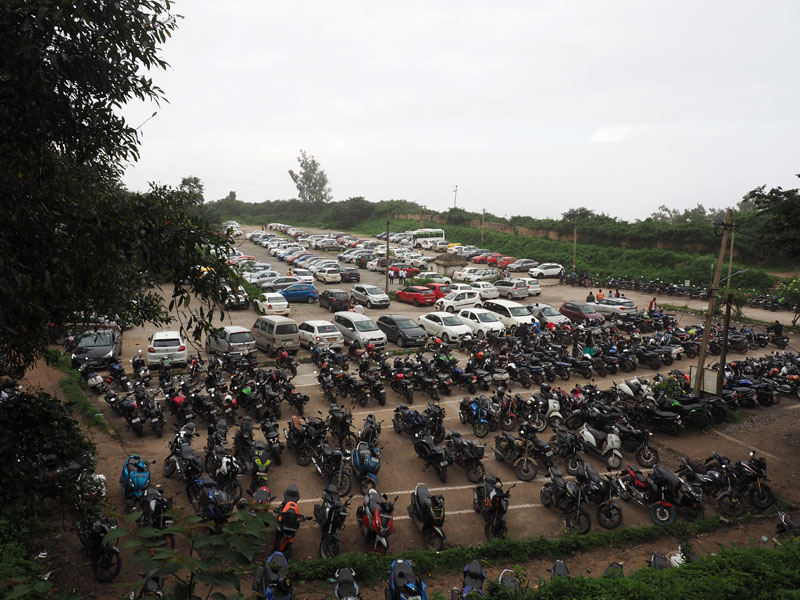 What we had not realized was that people come here to try to catch the sunrise. Unfortunately for these folks, this particular morning turned out to be quite foggy.

We explored the spaces at the top of the hill for a little while. 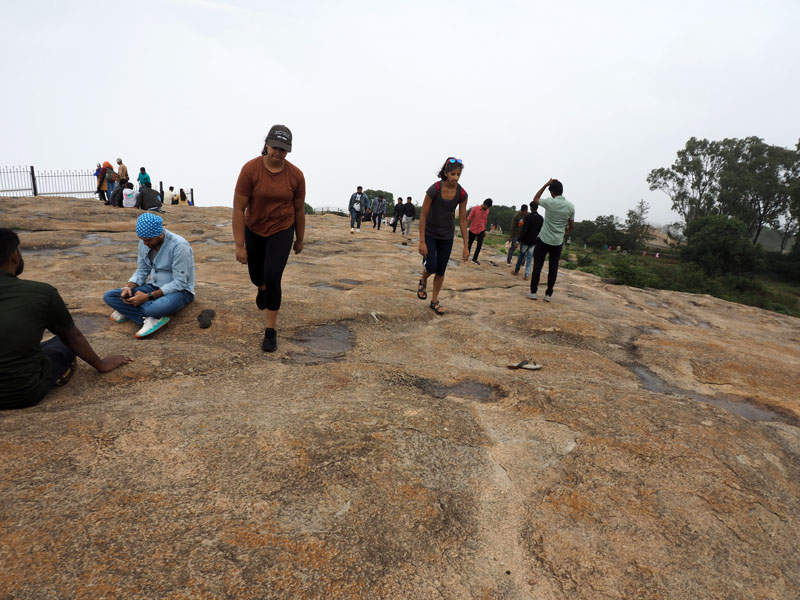 There were many lookouts from which we could not see much because of the mist.

There was a temple closer to the top of the hill.

This particular place that is considered the source of the Arkavathi river. 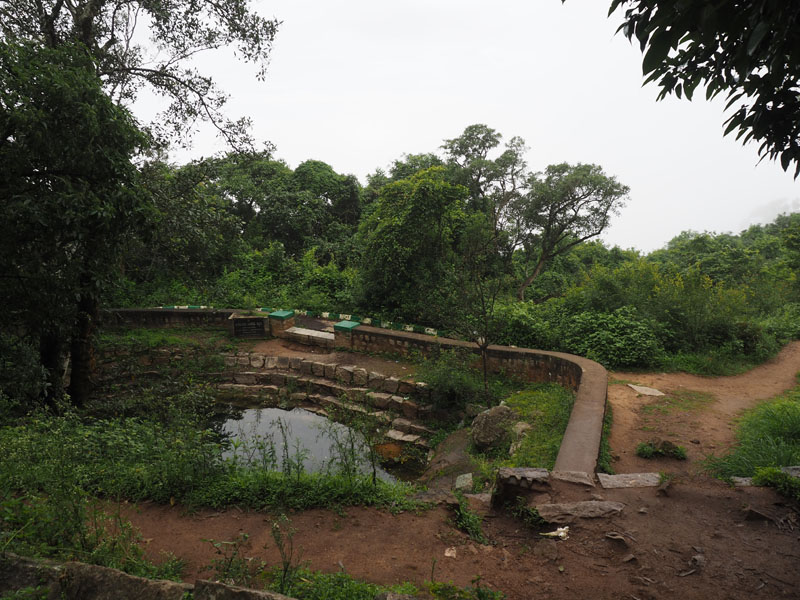 Tipu Sultan used the hills as his summer retreat. You can still see some of the remains of his summer palace, including the structure seen in the picture below.

There is a spot called Tipu Drop from which prisoners used to be thrown off the cliff.

The presence of the many monkeys on the hill was notable.

There were families of monkeys wandering around, including many mothers with babies hanging on to them, underneath their bellies.

Some of the monkeys were aggressive, and we were subject to attacks on two occasions. The first time, one of them made a grab for a smartphone that was being pulled out of a pocket. (We were told that the monkeys may barter these items back for food!) The second time, a monkey jumped on to a backpack on a person’s back, its attention having been drawn by some colorful objects sitting in a netted pouch on the side of the backpack. It might have thought it was food. Thankfully, we were able to shoo them away and nobody was hurt. Some of them do make angry faces and growl at you when you are engaged with them.

We eventually found our way to the beginning of the trail that went all the way down to the bottom of the hill. We started our descent.

The upper section of the trail was decently maintained. Along the way we could see buildings like the one in the picture below were people could stay overnight in order to experience the views from the hills directly from their rooms.

We were led by our fearless leader, John. His long and quick strides could have left us behind in the dust, but he adjusted his pace to match us, the laggards. (The picture below was taken much later in the hike when we were returning.)

We eventually ended up at a temple on the side of the hill.

As we approached, John asked the priest of the temple who was hanging around about the chaiwalla he had encountered at that location the previous time he had done the trail. The priest told him that the chaiwalla was not there that particular day of the week, but he offered to make us tea himself. He disappeared into a room and came back after a few minutes with piping hot cups of fresh tea that we thoroughly enjoyed. When we were done and asked him how much the cups of tea cost, he said that it was free. He did not want to take money from us! John offered some money as a donation to the temple, and the priest finally accepted. This encounter was a reminder to us that there a good people everywhere. We only have to keep our eyes open. The priest saw us on our way with a namaskar and a smile. He even tried to return the money back on our way back to the top of the hill.

The quality of the trail fell apart soon after we left the temple. There was an area just beyond the temple where the path was barely visible.

We plunged into the foliage after a moment’s hesitation. We had been warned beforehand about the possible presence of various different kinds of snakes on the hill.

Thankfully, this section of the trail went on for only a short distance, and the path opened up beyond that section.

There were hardly any people on the trail from the point where we left the area of the temple. We might have encountered one or two folks, one of whom was a worker headed for a pump house located next to the trail.

At this point, we were walking on steps cut into the stone, or steps built of stone. The overall slope was quite steep. It was not easy on the muscles. We had to pay attention to each step because of the uneven nature of the stones. Unfortunately, this section of the trail also did appear to be poorly maintained.

It was a pity, since the path of the trail itself was absolutely stunning and a very nice challenge for hikers! The trail itself could have been a great attraction for people from all over the world.

At this point our views were still obscured by mist and fog, but things were also getting better in this regard.

We had to make a few stops along the way to catch our breath and also hydrate. We eventually reached a point before reaching the bottom of the hill where we decided to turn back. It was beginning to warm up, and we were feeling the heat. We were also feeling the impact of the downhill descent on our muscles.

Going back up the stairs involved use of muscles that had not been put into use on our way down. It was also tougher on the lungs. Within a short distance of climbing, every step that we took up each of the stairs began to take an extra effort. We took it slow and steady.

The views were beginning to open up some more by now. 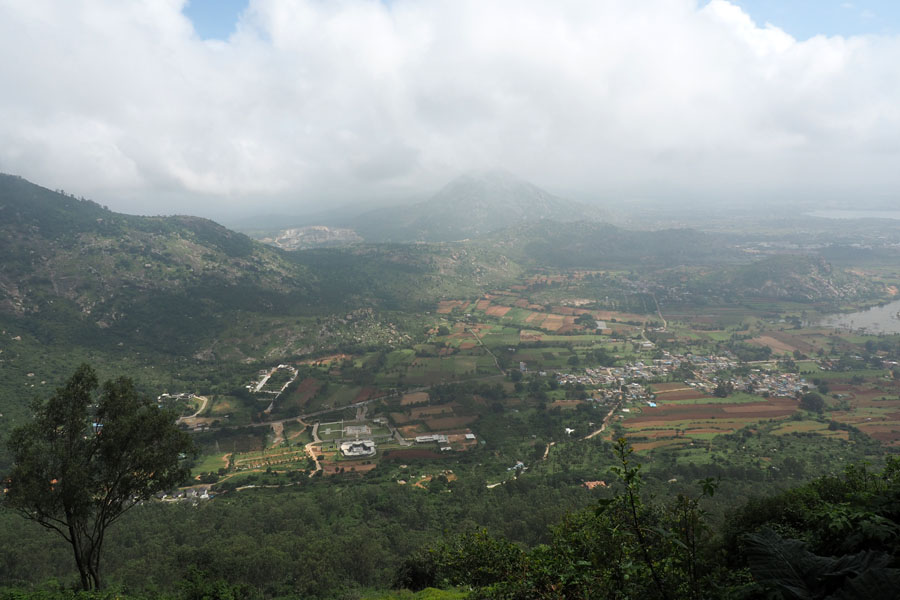 The walk back to the top of the hill seemed to go quicker than the time it took to go down the mountainside. I am not sure if this was real or my imagination.

We made sure to stay clear of the monkeys on the way back to the parking lot. When we got back, we found that the parking lot itself was not as full as it had been when we got there in the morning.

But there were still a significant number of visitors who were hanging around.

I thought we we had done some good exercise for the day, but we negated some of the good effort by indulging in substantial food consumption the rest of the afternoon – parathas on the way home, and Thai food after that when we got home. I am OK with that. We are on holiday after all.