We headed out to the town of Ollantaytambo, at the western end of the Sacred Valley, in the afternoon, after the morning trip to Maras and Moray.

Ollantaytambo is an Inca town that existed even before the time of the Spanish conquest.  It served as a fortress, and as an agricultural and religious center.  It saw action during the time of the conquest.  Today, the town is known for its ruins.  According to Wikipedia the town also has some of the oldest continuously occupied dwellings in South America.  Ollantaytambo appears to be a major tourist attraction in the Sacred Valley.

It took about an hour to get to Ollantaytambo from Urubamba.  We drove through narrow streets of the old town, and then past the town plaza, 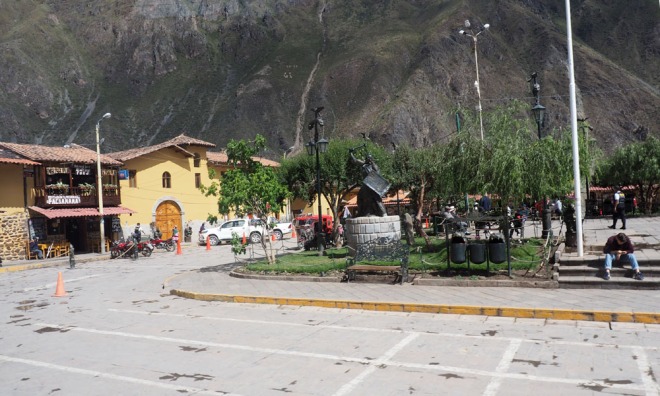 to arrive at the starting point for the climb to the Temple of the Sun.

The Temple of the Sun sits atop Temple Hill at the top of a series of terraces.  The terraces were used for agriculture.  The Incas were well known for the design of their terraces – they had a good irrigation system, and means for drainage of excess water, and you can also see the excellent stonework in the walls of the terraces.  The rocks were cut to fit snugly into each other without the need for mortar.  (The Spanish stonework was extremely crude in comparison.)  The Incas were good civil engineers! 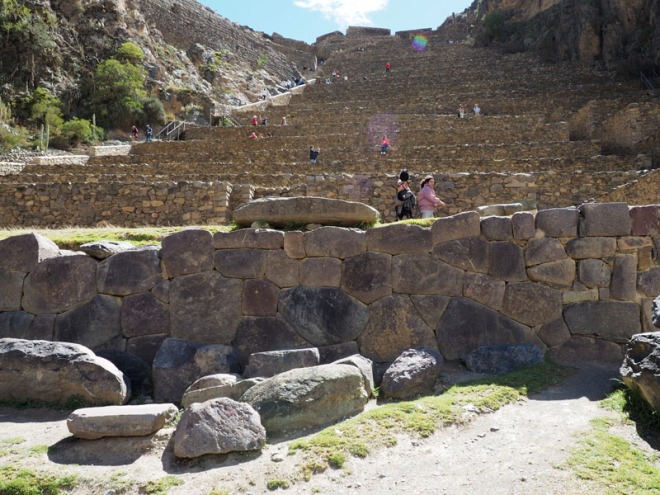 The Pinkuylluna ruins lie on the mountainside opposite the Temple Hill, on the other side of town.  There are trails that go up this mountain and past these ruins.  (I would have loved to explore these trails if we had been on our own.)  The ruins include granaries and other kinds of buildings built into the mountains slopes. 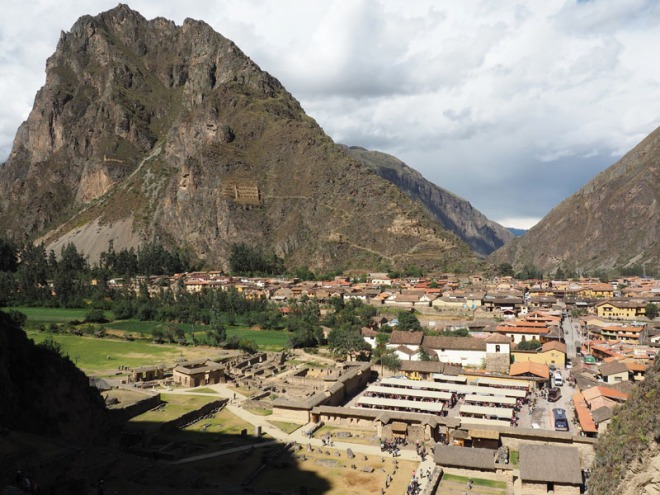 This is a closer picture of one of the granaries on Pinkuylluna. 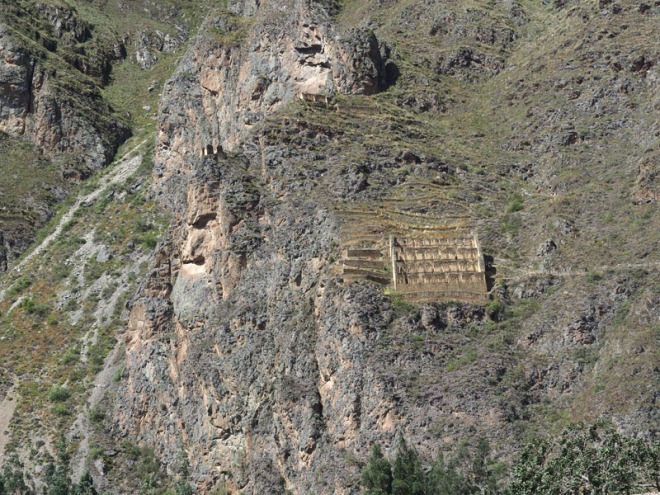 You can see the town sprawled out in front of you as you climb Temple Hill.  The buildings towards the middle of the picture house shops for tourists.

You arrive at the temple at the top of the steps, and the first thing you see is a structure called the Wall of the Six Monoliths.  You can get an idea as to how big these pieces of rock are, and also how perfectly the rocks fit against each other. This is another example of the great Inca construction capabilities. 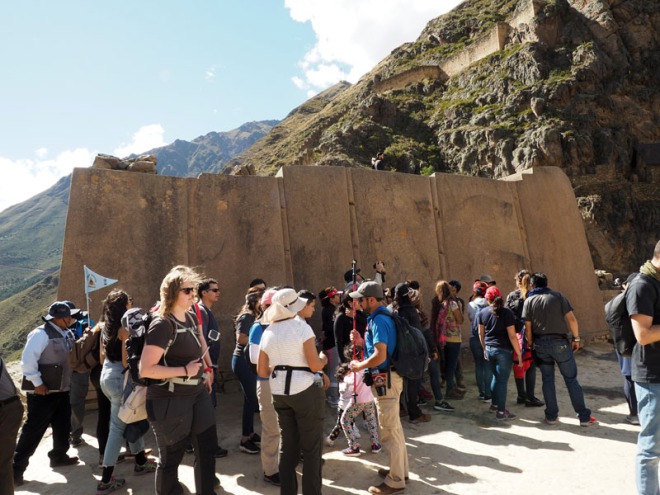 Above the Wall of the Six Monoliths, you find an open space with ruins, and you can also see that the ruins extend further up the mountain. 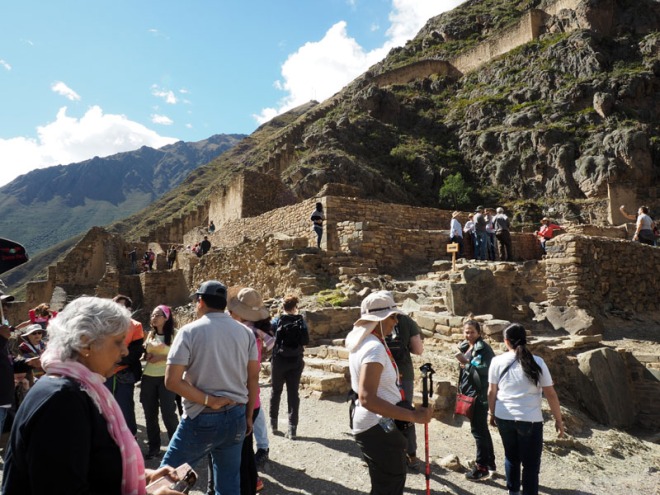 Worthy of note is the fact that this temple was left uncompleted.

This is another view of the town from the level of the temple. 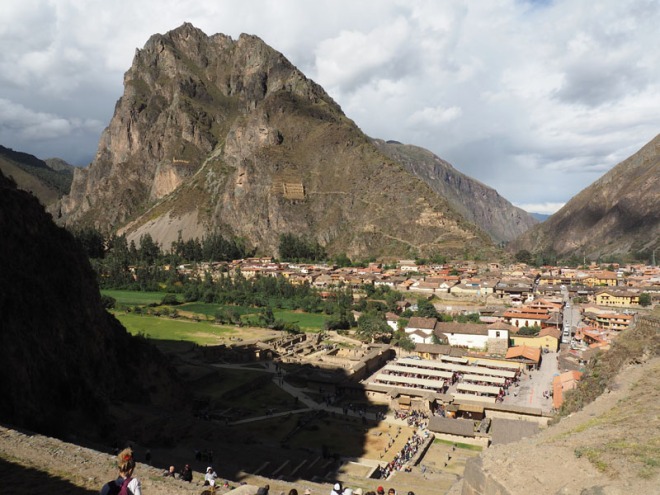 On the other side of Temple Hill you can see the fields in the valley to the west of Ollantaytambo.  The train to Machu Picchu departs in this direction. 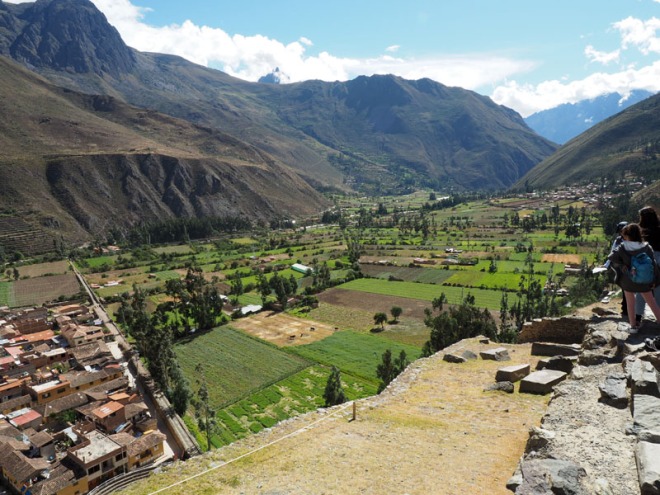 The steps to get to the Temple of the Sun are rather steep.  We were told that the steps here were more regular than at Machu Picchu. Our tour manager had convinced some of us to buy sticks to help with tackling the steps.  It was probably unnecessary. 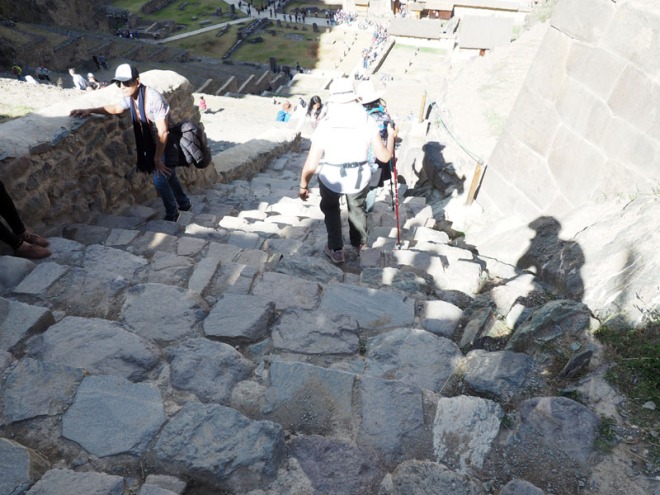 The stairs were generally crowded – packed with tourists going in both directions. 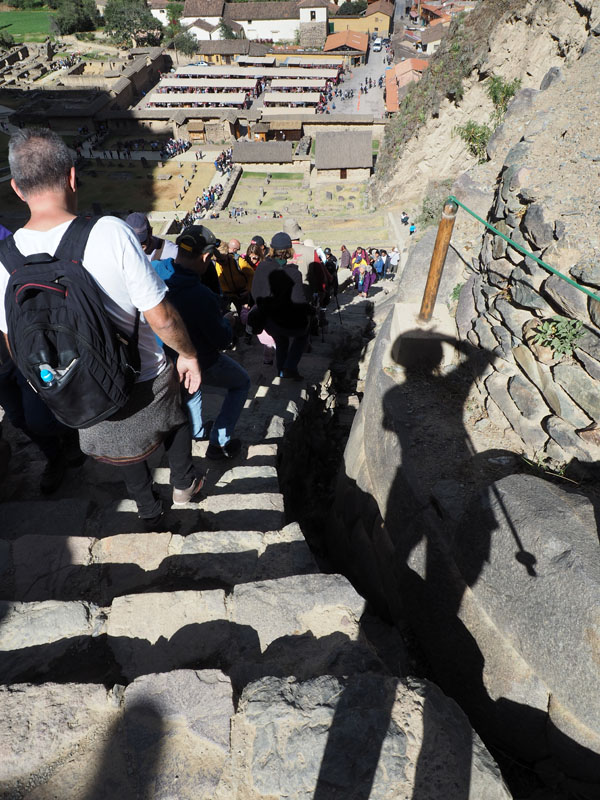 I noticed that there were other trails on the mountain that led to other destinations beside the Temple of the Sun, including this one.  We, unfortunately, did not have the time for further explorations. 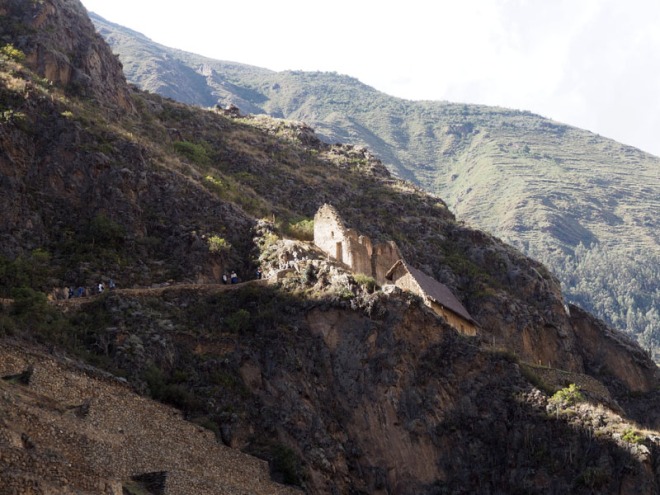 After getting to the bottom of the hill, we had to walk though the shopping area to get back to our bus. 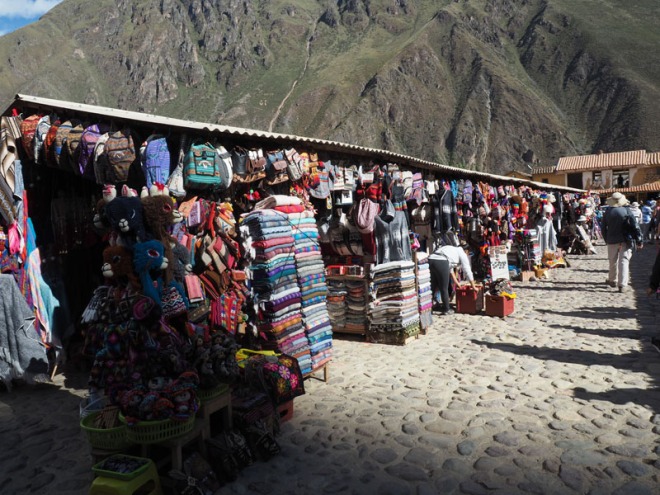 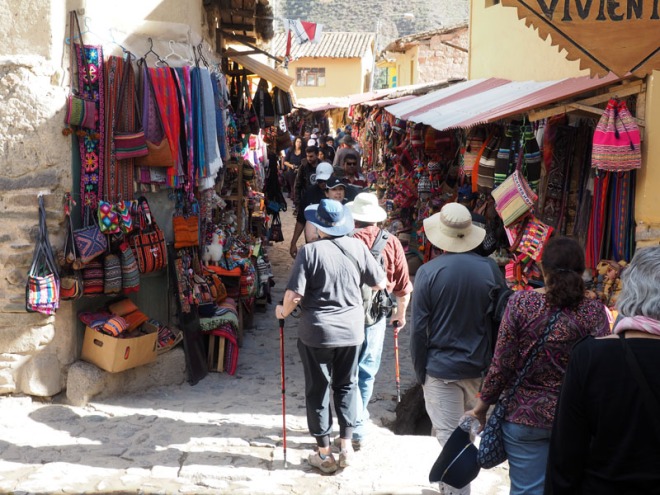 Once on the bus, we drove past the town square once again to get out of town. 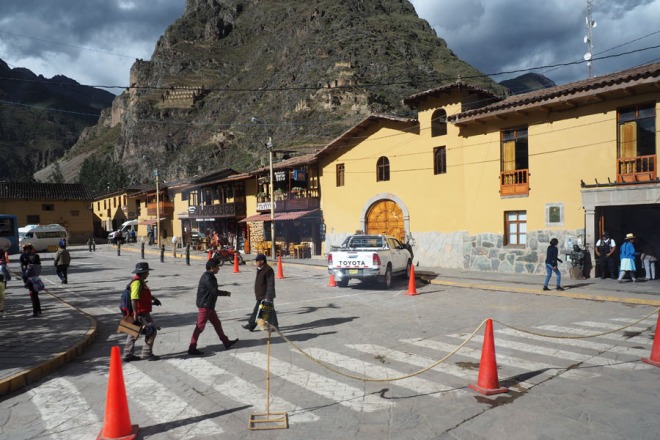 That evening, after we returned to Urubamba, we went out to a local family home for dinner.  The dinner was an optional part of the tour, and was part of a program set up by our tour group, Gate1, to provide local people with an additional source of income, and at the same time give tourists an opportunity to meet and get to know some of the locals.

We took the tour bus from the hotel to the home we were visiting. As we parked, a door opened to a closed and walled compound to let us in. We walked through a front yard, and then past the kitchen, 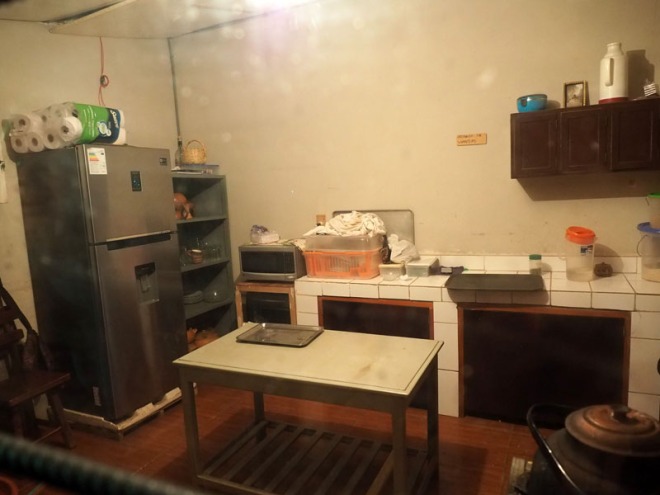 to get to the room where dinner was being served.

During dinner, we conversed with the family with the help of our assistant tour manager who served as interpreter.  We were joined for dinner by the matriarch of the family.  She is the older lady sitting to the left of the picture below.  She oversees her clan, including two of her sons who live on the property with their families.  One of the sons takes care of the property, including the garden and its produce.  He sits to the left of the picture in the foreground. His wife, sitting at the far end of the table, prepared the dinner.  (She could not sit with us during dinnertime, but joined us for dessert.)  The other son is sitting on the right side of the table.  He makes artwork out of ceramics.  (We saw his workshop on the way out.)  Dinner was excellent.  We had a unique dessert made out of tree tomatoes grown in their garden.  The quinoa soup was exceptional.  I understand that the dinner was prepared with ingredients from their garden. 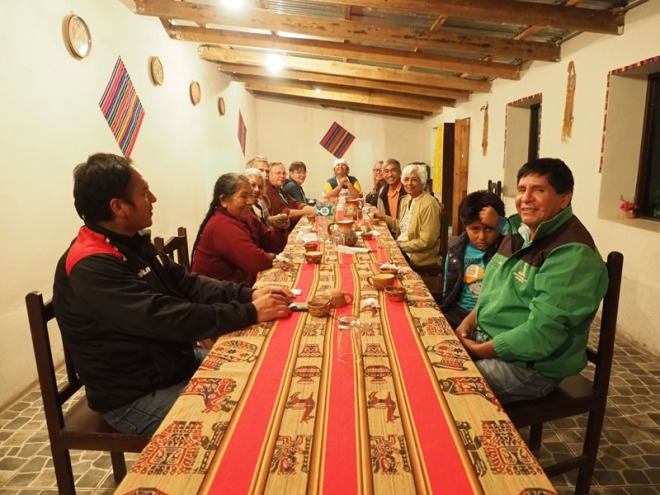 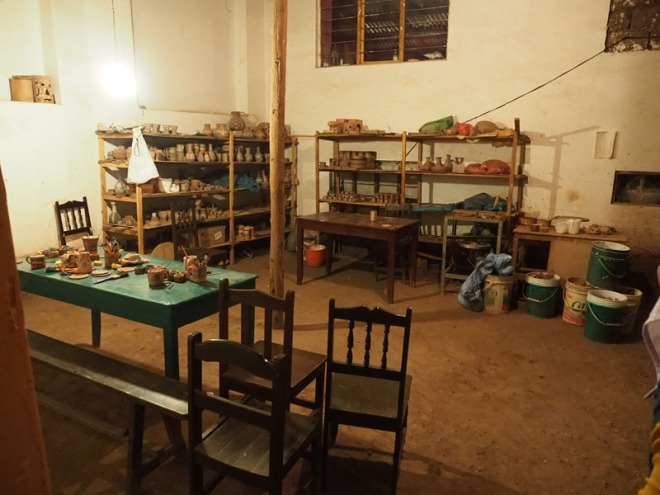 Gate1’s dinner program helps the families during hard times.  I understand that occasional flooding is an problem in places like Urubamba and others that depend on agriculture.

Earlier on in the day, we had been a little concerned about going to this dinner because we were scheduled for an early start the next morning – a 5:30am checkout and departure.  But, at the end of the day, we were glad that we visited the family.  It was a simple affair, and it was over early enough in the evening for us to get back to our rooms and prepare for the big day tomorrow!

Next in this series of blogs here.