It was our first weekend walk along the C&O Canal after my return from India. After our earlier somewhat less successful experiences in the Shenandoah National Park with the viewing of Fall colors, we were going to give it a shot once again. But, based on experiences of past years, I was also not expecting much success in this regard. Except for in a few short sections of the canal closer to the city, the leaves on the trees along the towpath tend to fade to shades of yellow, with perhaps an occasional tinge of orange if you are lucky, or turn directly to brown. You do not see much of the reds.

In any case, we decided to give it a try, and headed to a place that was much more north and west of where we lived, where, according to the Maryland Department of Natural Resources, Fall was well underway. We went to Williamsport.

Unfortunately, we arrived in Williamsport to find that most of the vegetation was still green. 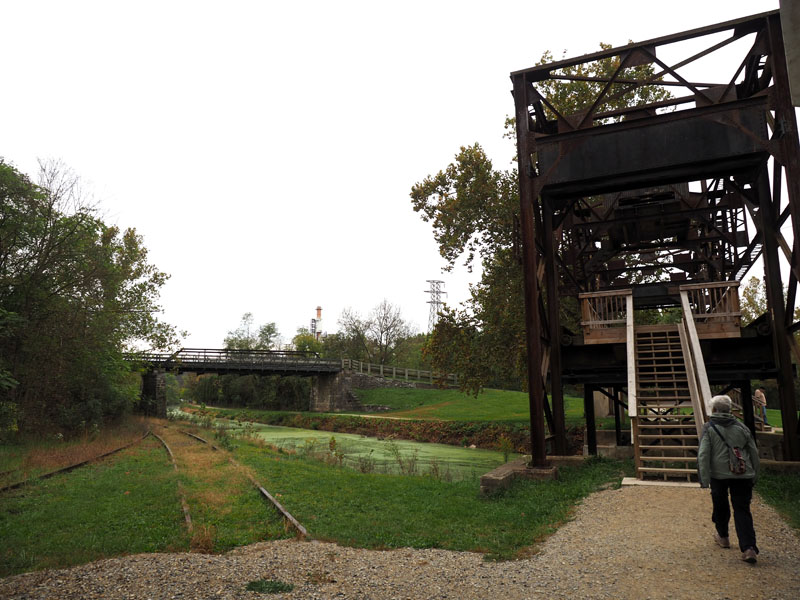 We walked south on the trail up to a section just beyond the re-watered part of the canal. At that point we determined that the colors were not going to improve. We aborted the walk, returned to the car, and decided to drive further west to see if we could have better luck in our endeavors. This part of the Sunday morning activities was totally unplanned.

In any case, before leaving Williamsport, I managed to get a picture of the restored Conococheague aqueduct from the level of the creek, something I was unable to do during our previous visit. 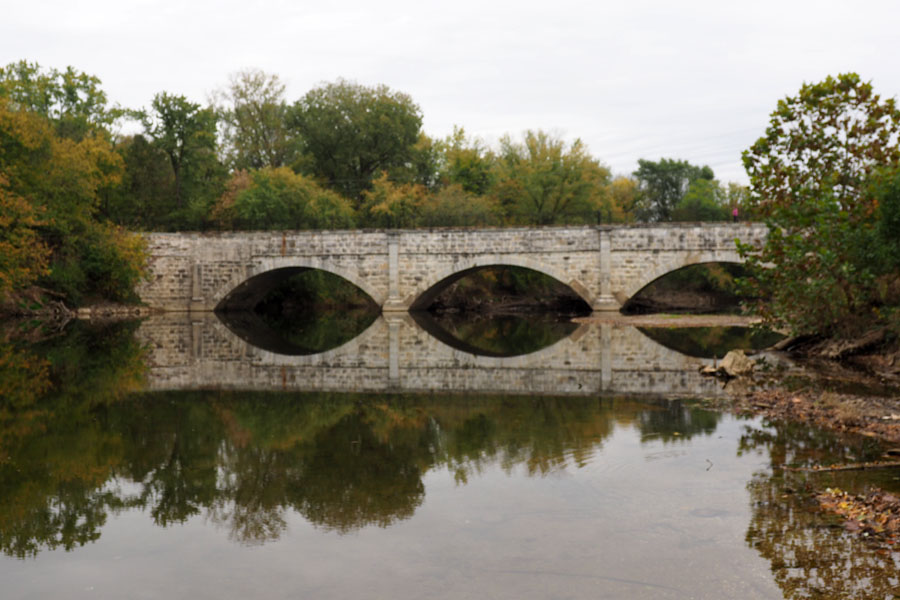 We drove west past Hancock. Soon after, just before the Sideling Hill cut on highway I-68, we turned south onto Woodmont Road, one of the occasional narrow local roads that run through this extremely rural section of Maryland.

This space was a part of Maryland that I used to come to by myself, to run and explore, every once in a while in the past, but not recently. This section of the Maryland is lightly populated and heavily wooded. The drive south on Woodmont Road was quite nice, and we could see some color on the trees along the way.

We ended up at the parking lot for the Western Maryland Railroad Trail (WMRT) in Pearre, MD. This parking lot used to be the western terminus for the WMRT. We discovered that morning that the trail has been further extended a few miles west.

We were able to get on to the C&O canal towpath from the WMRT using a connector between the two trails. Alas, the vegetation here was also mostly green. We took the trail headed in a westerly direction. It was less than a mile before we crossed the Sideling creek and Aqueduct. 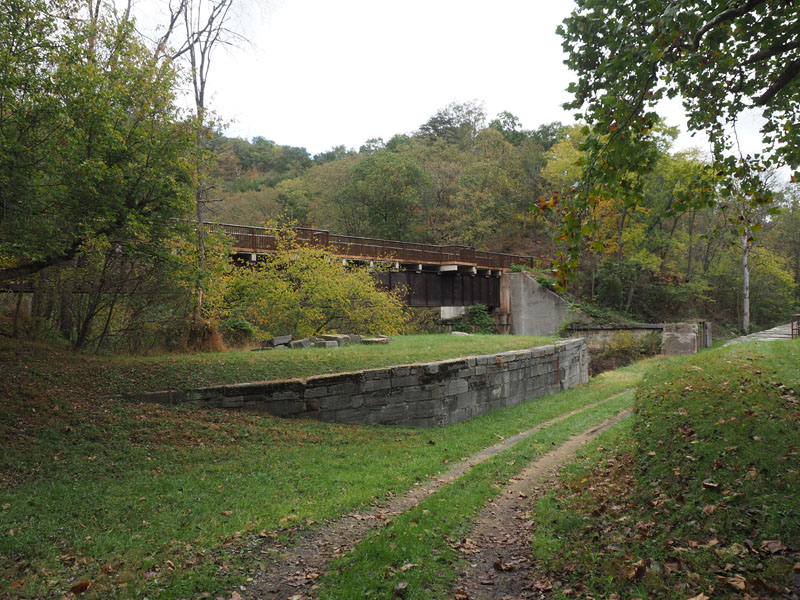 The railings on the WMRT (behind the aqueduct in the picture above) looked new from the level of the aqueduct. This was our first hint that that trail might have been extended beyond Pearre. It was perhaps more than a mile after that before we came to a place where we saw the following structure. 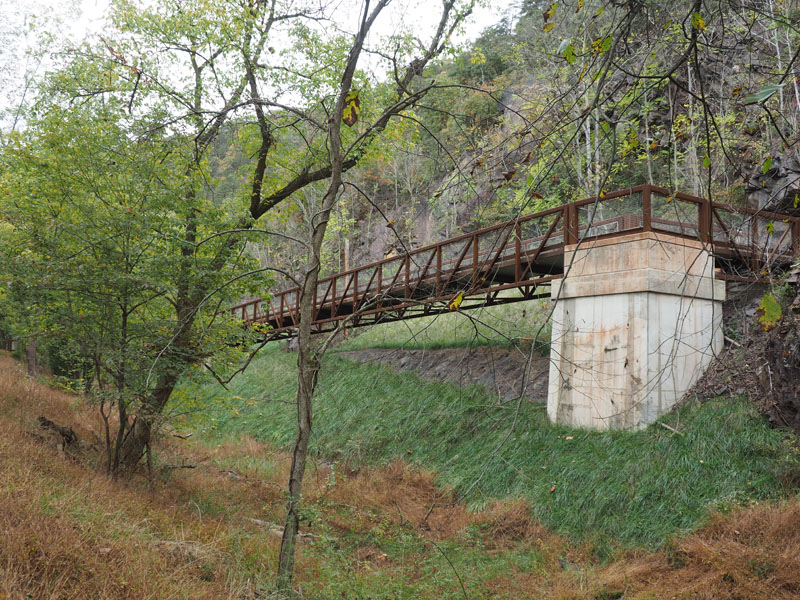 We realized that this was the place where the extension of the WMRT on the railroad right-of-way ended. This was where the WMRT connected back to the towpath.

We decided to tranfer to the WMRT for our return to Pearre. There was a little more color to be experienced from this perspective, but not much. 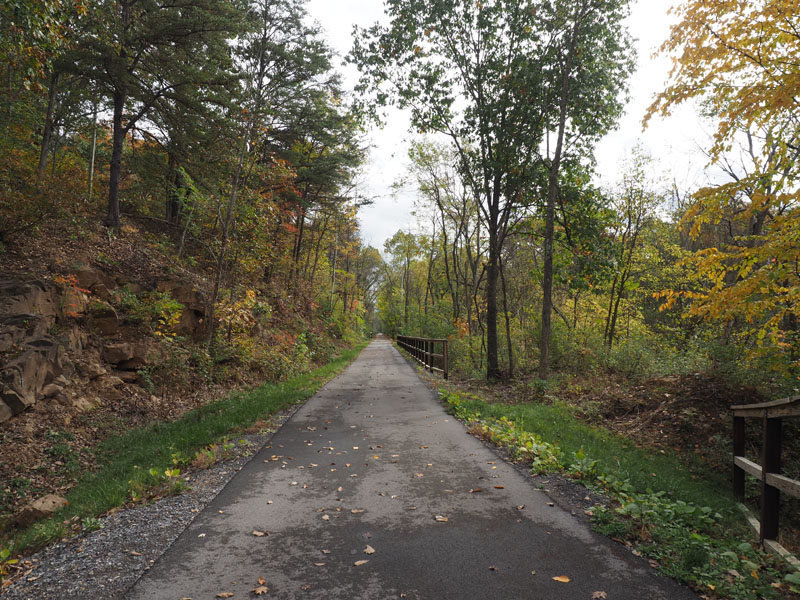 The trail was very nicely paved and in much better shape than the towpath in these parts.

It turned into a long morning because of our having gone to two different places, and because of the extended distance away from home that we had traveled. I was tired, and it put me in a bad place later in the day for the first music practice after my return from India.

We have not had much success so far this year in our quirky annual endeavor of trying to find places to experience the colors of Fall. It may not be too surprising to some that I have been observing the fuller phenomenon of Fall, with more of its brilliant colors, more vividly closer to home – on the local roads – in recent days. I do not know yet if I will end up taking pictures.